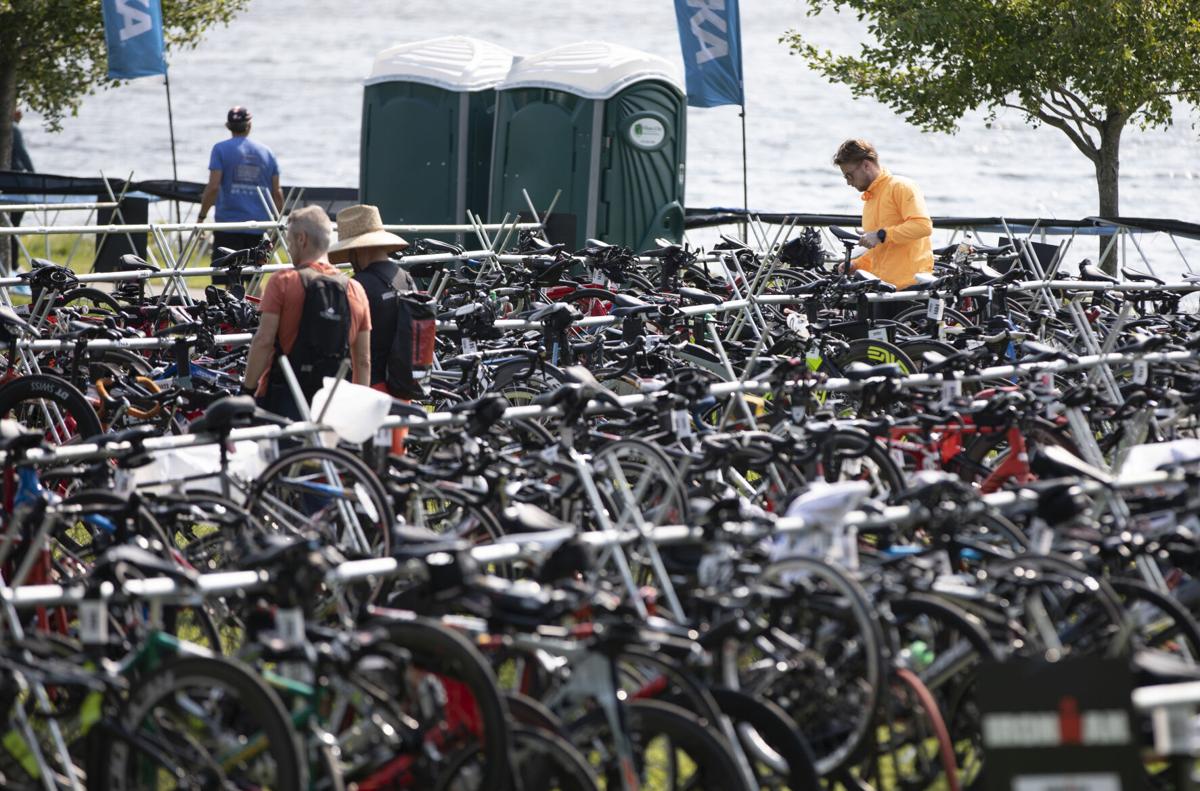 Athletes check in their bikes at the Ironman Village in Frankfort on Saturday. 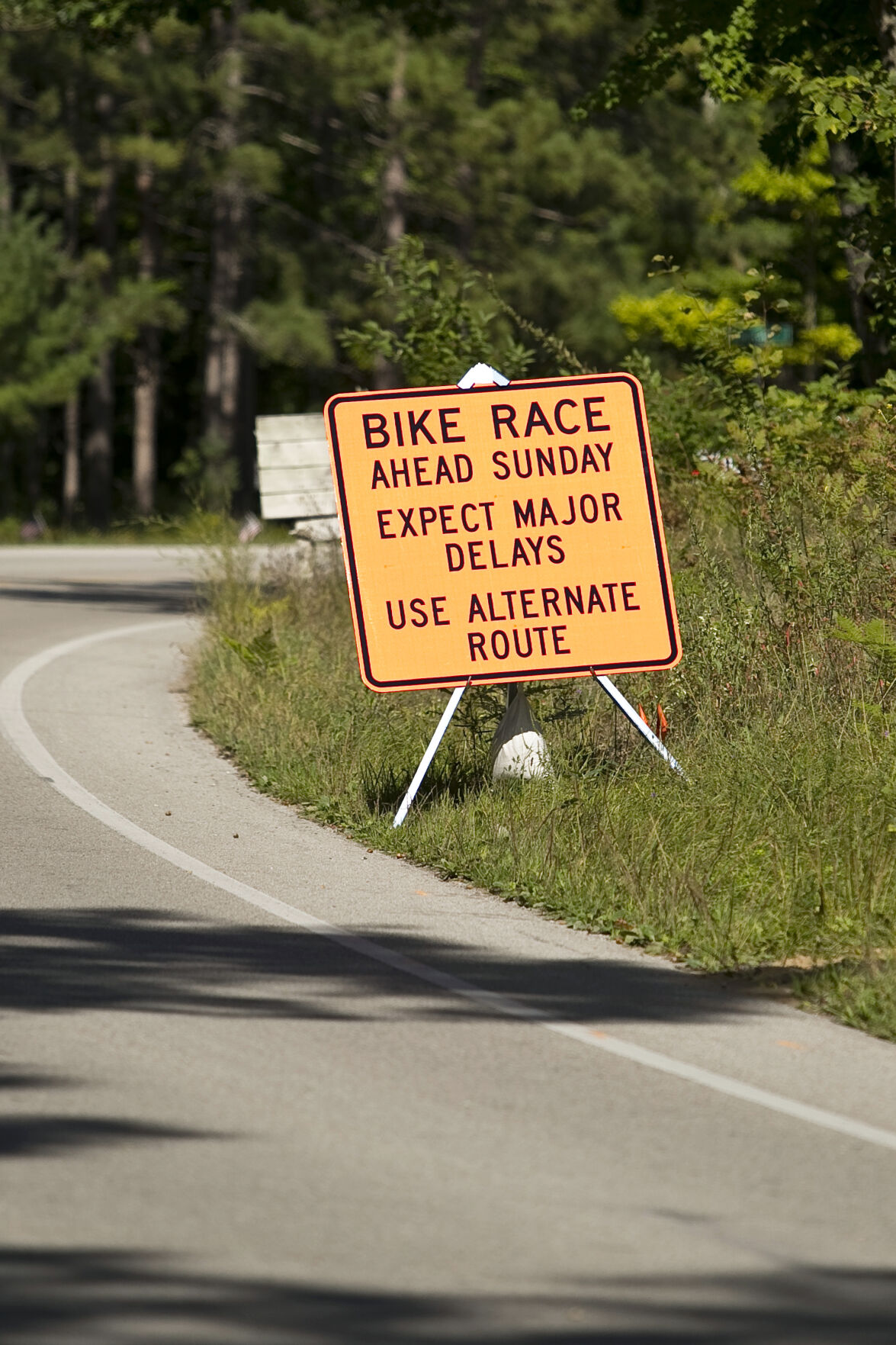 A sign on Deadstream Road near Honor warns of traffic backups during the Ironman race, which starts this morning. 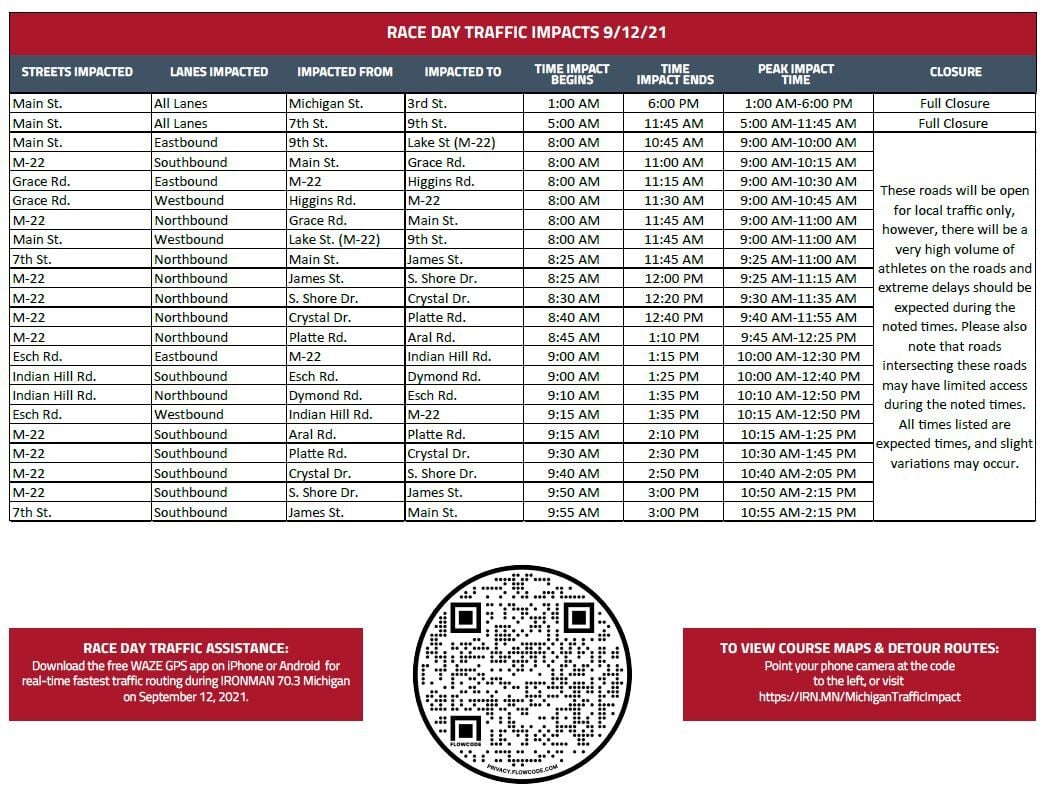 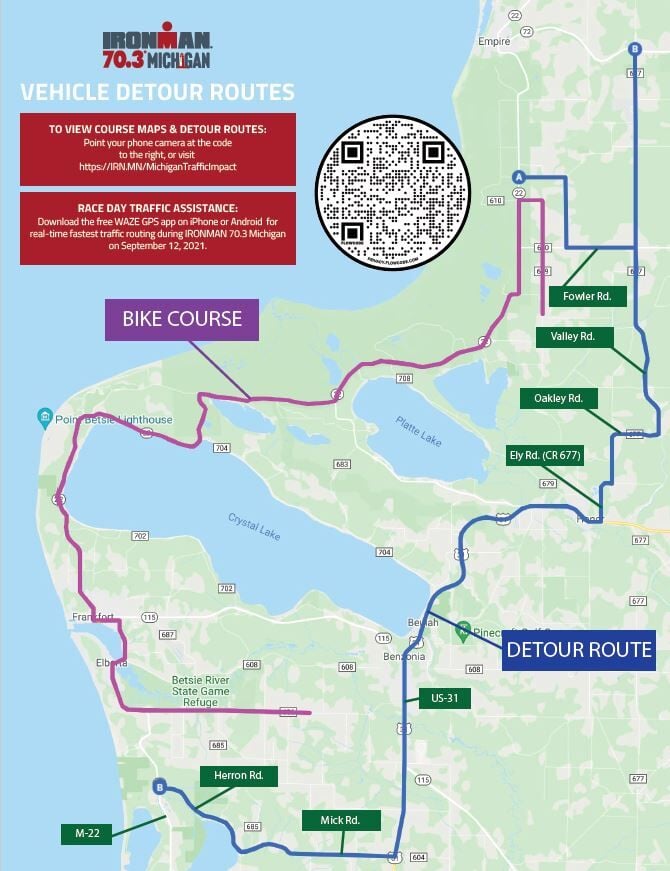 Athletes check in their bikes at the Ironman Village in Frankfort on Saturday.

A sign on Deadstream Road near Honor warns of traffic backups during the Ironman race, which starts this morning.

FRANKFORT — Two years after the IRONMAN 70.3 triathlon caused traffic headaches across Grand Traverse and Leelanau Counties, road closures were set to begin early Sunday morning for the first of at least two races in the small Lake Michigan town of Frankfort.

Athletes started checking in at noon Friday and bike drop-off was Saturday. The race begins at 8 a.m. in Frankfort with the first athletes expected to cross the finish line around noon.

The bulk of entrants elected to defer their entry from the canceled Traverse City race in 2020.

“We looked at some of the course logistics of the way the course was laid out for our 2019 event and we tried to come up with a course that for this year’s event that would mitigate some of those traffic issues,” said Gaff, who oversaw the 2019 race in Traverse City as well.

The 2019 race in Traverse City was rated one of the best in North America in several categories, but it also was met with negative feedback and criticism from Leelanau County officials over road closures and inconvenience. In December 2020 it was announced the race would be relocated to Frankfort with the potential for three more years.

Gaff said he consistently met with the Benzie County Road Commission and the Michigan Department of Transportation in the months leading up to Sunday’s event.

Main Street is the only road in Benzie County that’s closed to vehicles Sunday (from Michigan Street to 3rd street 1-6 a.m., and from 7th Street to 9th Street from 5-11:45 a.m.). Intersections along most of M-22 from Empire to Beulah are open to local traffic only, but with the expectation for extreme delays at various times.

Gaff said a 45-minute wait as the peloton of bikers passes by could be a possibility.

“The roads will available for folks who need to be in there for local access only, but folks would really expect to have some pretty serious delays during the race,” Gaff said.

A detour route extends from M-72 east of Empire, through Valley Road and U.S. 31, ending at M-22 south of Elberta at Herron Road.

Signs have been posted on M-22 throughout the week on the race’s route. It’s a three-leg race, with 13.1 miles of running, 56 miles of cycling and 1.2 miles of swimming in Betsie Bay. The 70.3 is derived from the number of miles athletes travel start to finish, and that’s just half of the full 140.6-mile triathlon that consists of a 26.2-mile marathon, 112-mile bike ride and 2.4-mile swim.

The Huskies cross country and track program will benefit from a share of $25,000 in grant money from the Ironman Foundation, Gaff said, which will fund nonprofits in the greater Benzie County community.

Traverse City Tourism, one of the event’s sponsors, held a fundraising campaign of their own to benefit the Friends of the Betsie Valley Trail, Munson Manor Hospitality House, Frankfort Lighthouse and Single MOMM.

Representatives from those charities and organizations will compete in the race too.

Paul Oliver Memorial Hospital will work as a team with Adrienne Stephen Jones in the running segment, Michelle Russell on the cycle and Dr. Nancy Smith in the swimming event. Munson Manor Hospitality House will also have a team of three with Justin Mortier, Jason Crum and Dan Spalla competing.

The other charities will have one person compete in the entire triathlon. Frederik Stig-Nielsen will compete for the Friends of the Betsie Valley Trail. Ross Hammersley is the triathlete for the Frankfort Lighthouse, while Patrick McIntyre competes for Single MOMM.

Richard Ensslen, 78, of Edmonton, Alberta, is the oldest competitor in the race; Sonia Bowers, 18, of Baltimore, Ohio, is the youngest.

The race wraps up with awards at 5 p.m. Most of the day’s events take place in the Ironman village, which is located at the Open Space in downtown Frankfort.

The Benzie Bus will provide Race Day shuttles from 4:30-7:30 a.m. to take racers and spectators from the following designated parking areas to the race starting line:

Buses will be available to take attendees back to their cars until 7:30 p.m.

Up to the minute traffic information is available via the Waze app for iPhone and Android or IRN.MN/MichiganTrafficImpact.

Organizers already announced the race will be returning to Frankfort next fall with a date set for Sept. 11, 2022.