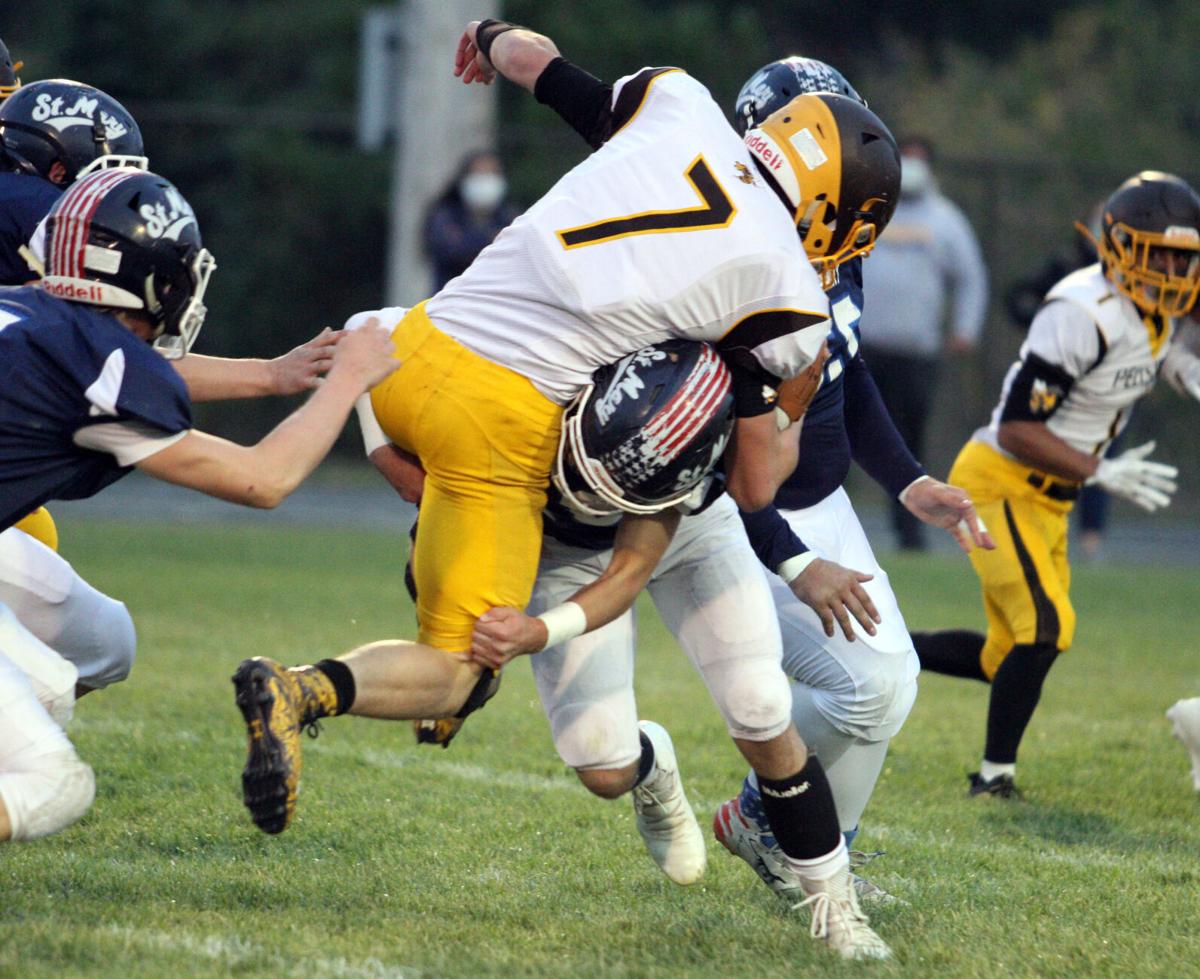 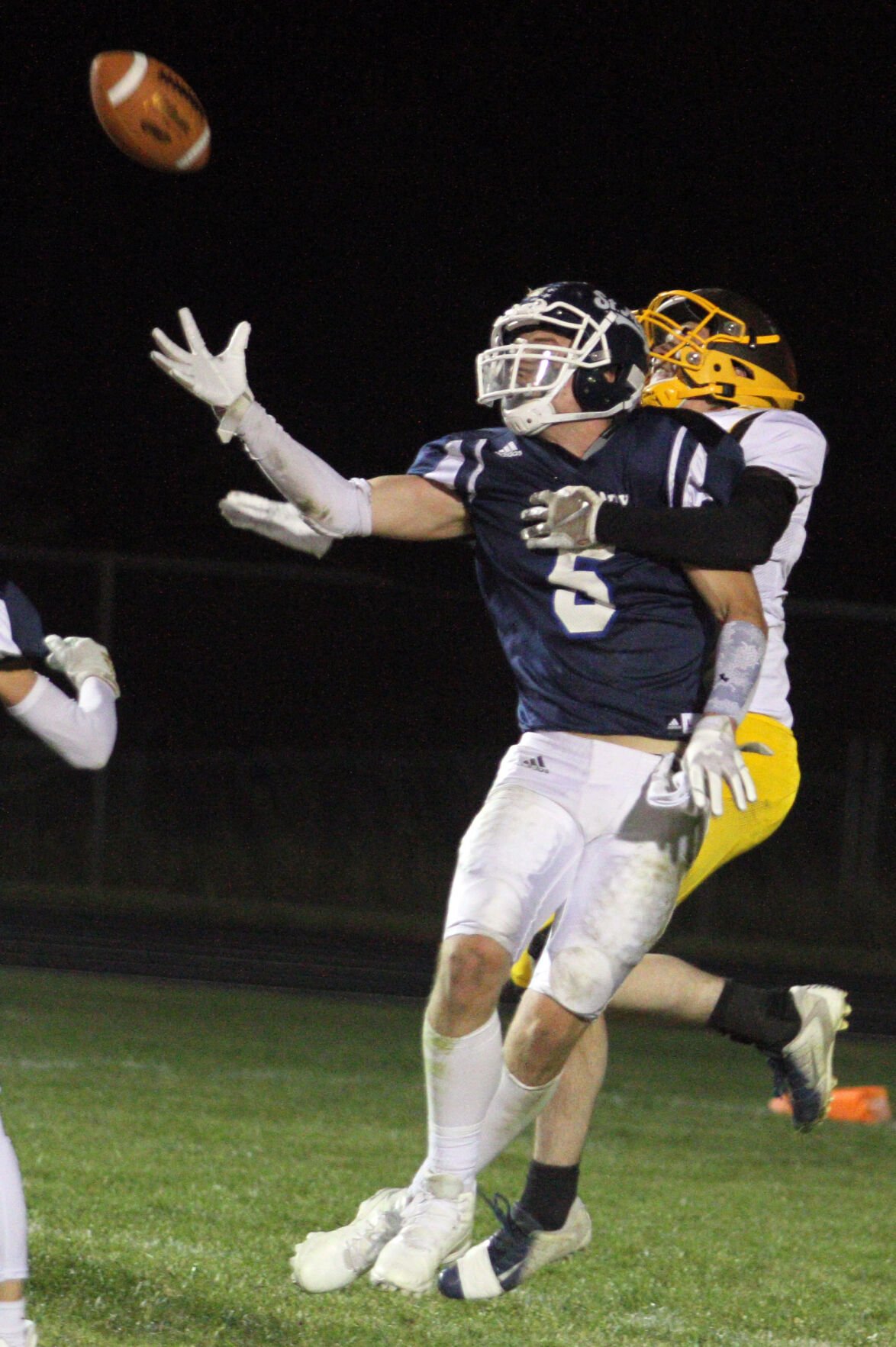 GAYLORD — It’s not that long of a trip from laughingstock to getting the last laugh.

“Until we go out there and beat them, they are the example,” fourth-year Pellston head coach Jack Carter said.

Pellston saw that example last year. Even after an 8-1 regular season, the Snowbirds crushed the Hornets 48-6 in the postseason’s opening round.

The Hornets (4-0) did more than that Friday.

They painted themselves as one of the top eight-player football teams in northern Michigan by beating one of the others.

In Carter’s four years, the Hornets started with a 1-8 campaign, then gradually improved to 4-5 and 8-1, making the playoffs for the first time in school history.

Now they’re 4-0, having topped the team that eliminated them last year.

“We need to play harder,” St. Mary wide receiver Conrad Korte said. “We need to leave it all out on the field. And we didn’t really do that tonight. We missed a lot of little things. We had a lot of dropped passes, a lot of missed opportunities, some missed tackles. All the little things just added up and cost us the game.”

St. Mary (3-1) trailed by two scores much of the second half, battling back and staying in the game with big plays through the air.

A 26-yard Chris Koscielniak touchdown run was set up by a 20-yard pass to Brody Jeffers on fourth-and-15. The Snowbirds then stopped Pellston at the one-inch line with 1:06 left, but couldn’t get the aerial attack off the ground this time and turned the ball over on downs with 29 ticks left.

After St. Mary scored on a 10-yard TD pass to Korte with 8:49 left to cut the lead to 28-22, Nate Chiles returned the ensuing kickoff for a touchdown to go back up double digits at 34-22.

Pellston took a 28-16 lead on an Isaiah Crawford 23-yard TD run after a roughing the quarterback call nullified a Korte interception. The Hornets took a 22-16 lead when Ian Reimann recovered a high GSM snap in the end zone.

Pellston dominated time of possession in the first quarter by running 20 offensive plays to the Snowbirds’ four, and the Hornets took a 6-0 lead on Nate Chiles fumble recovery in the end zone.

The Snowbirds drove 71 yards over eight plays, with Koscielniak hitting Korte on a slant route for a 24-yard TD pass.

Koscielniak rans for 47 yards on 20 carries, although he had 55 yards in negative plays from losses passing and bad snaps.

He threw 29 times for 240 yards and touchdown, with Jeffers completing one pass for 11 yards and a TD (plus a two-point conversion).

Korte caught five passes for 93 yards, Jeffers five for 84 and Tristan Glasby two for 75 yards. Receiver Dom Keister sat out the game with a concussion.

“We tried to give them as little film as possible last game,” Korte said. “So coming into this game, we came out and used everything we didn’t run last game, just ran spread and (run-pass option). It worked well for the most part we just had a lot of job passes, which hurt us in the long run.”

Dylan Acevedo made 10 tackles, including two for loss for the Snowbirds. Koscielniak had 14 stops.

St. Mary dominated this series for a long time, owning a 31-7-2 mark against the Hornets coming into this contest. But each won three of the last six, including a combined 93-6 total in St. Mary’s favor in the last two.

“Last two weeks of the season, I’m looking forward to some tougher, more physical practices,” Korte said. “Some more intensity on our side of the ball, focus on not getting down on ourselves.”

Only the Beginning: Mirabelli leads Sabres over No. 9-ranked Gladiators

MESICK — The Mesick Bulldogs put stats up in just about every category during a 74-26 victory over Bear Lake Saturday.

SHOCK TO THE SYSTEM: AEDs in schools increasing

TRAVERSE CITY — Reid Ruggles witnessed an athlete die on the court once, and doesn’t want to see it again.