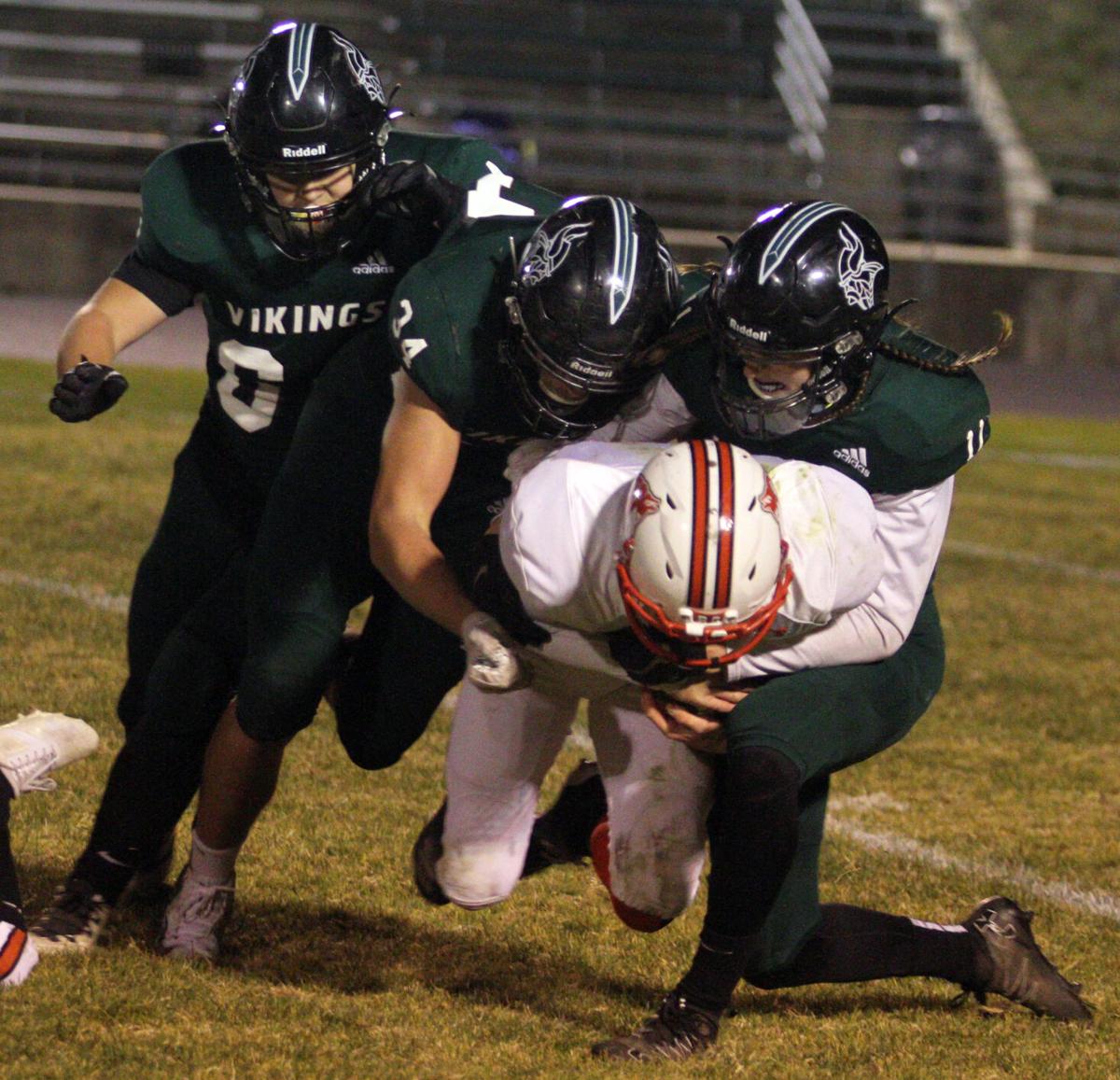 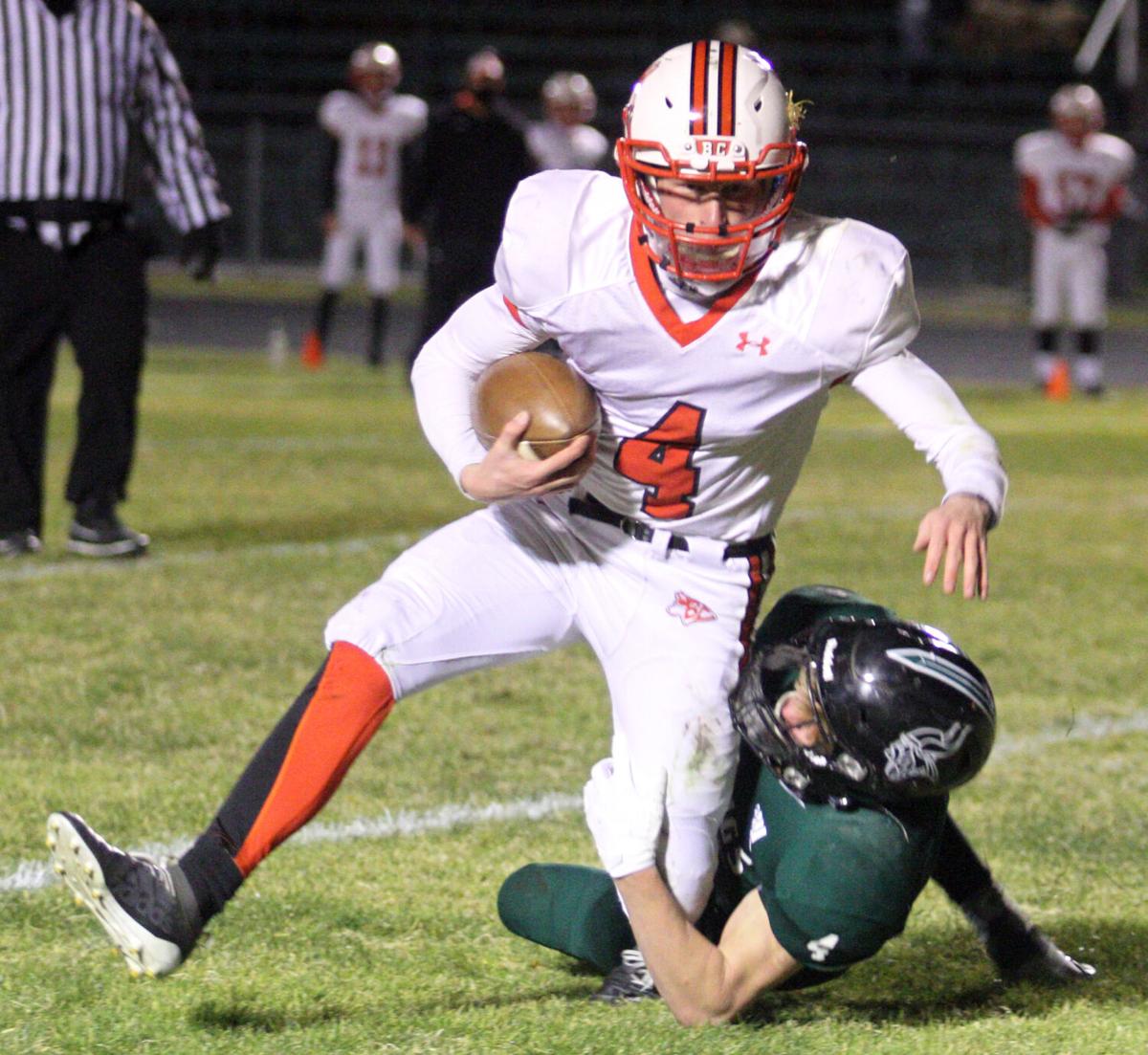 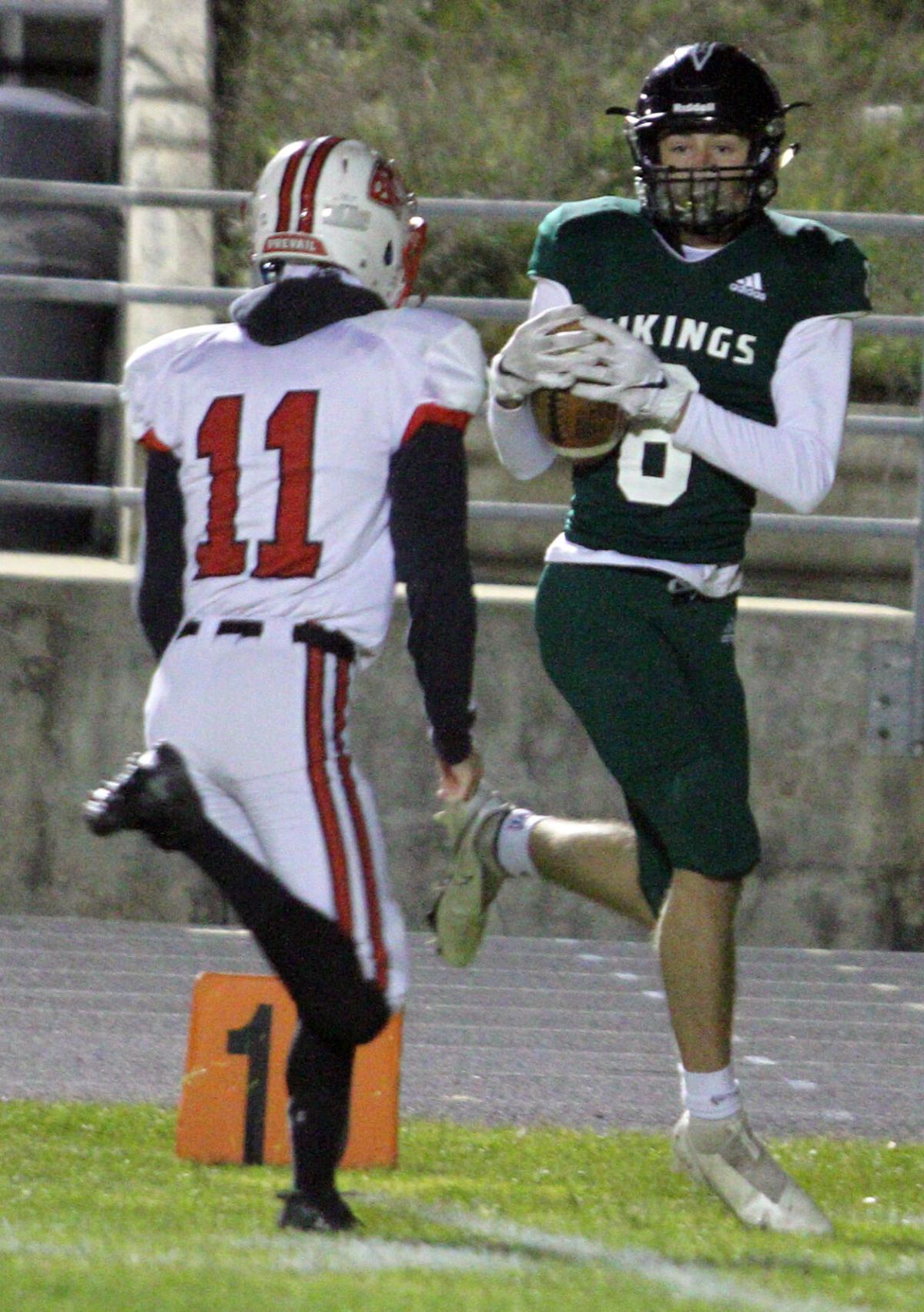 Despite a 4-3 record, they hadn’t rung the bell at Donald L. Ferguson Field this season.

“It was a little confusing at first,” Vikings junior running back David Millikin said after rushing for five touchdowns. “Then we were like, whatever.”

The team ran to the end zone under the scoreboard that read 47-12 and rung the victory bell, officially signalling a home win, although the game was decided long before.

The Vikings avenged a 41-28 loss to Benzie Central four weeks earlier with a 47-12 win in Friday night’s Division 6 playoff football game at Ferguson Field in Grayling and advance to play Manistee next week.

Arguably, the game was over even before it started.

Benzie hadn’t practiced all week, aside from a one-hour session Friday afternoon at the Grayling youth football field, after a COVID-19 outbreak at the school. Benzie had to leave 13 players behind in quarantine, all starters.

The Huskies (2-5) traveled to Grayling (4-3) with only 20 players, even after calling up numerous junior varsity players head coach Jason Katt thought were ready enough to play a 48-minute varsity game.

Five plays into the game, Benzie lost left tackle Kyle Wilson to an ankle injury, and he was carted off the field and taken to a hospital by ambulance. Wilson was released from the hospital Friday night and will undergo further testing to determine the injury’s severity.

Senior center Mason Blank left with an injury a few plays after Wilson. The Huskies played much of the game with only 6 players on the bench.

“You know, our boys did the best they could,” Katt said. “It’s rough, but we’re proud of our boys.”

Still, Grayling was impressive on its own as the Vikings hosted a playoff game for the first time since 2013. Millikin ran 12 times for 171 yards and came one score away from the school record for rushing touchdowns in a single game.

“He’s a special kid,” Grayling head coach Eric Tunney said of Millikin. “Obviously, he’s got some natural ability, but he puts the work in the offseason and during the season. He’s one of our hardest workers and that rubs off on the other kids. He’s a leader. He’s tough to bring down and he plays every play at full speed.”

Hunter Ventline completed 4-of-9 passes for 147 yards and two touchdowns, both to Dylan Cragg, who had three receptions for 129 yards. Ventline also ran for 39 yards, Jake Huspen 33 and Anthony Fisher 30.

“I think we’ve come a long way as a team throughout the season which is pretty awesome,” Millikin said. “We’ve grown a lot. Everyone’s working together and it’s really been going for us.

“I mean the O-line and D-line, they were pounding. It was awesome. Really, that’s the only reason I could do what I did. So, a lot of credit goes out to them.”

Manistee (6-1) beat Kalkaska (0-7) 62-6. The Vikings and and Chippewas meet next week in the district semifinals at top-seeded Manistee in the inaugural meeting between the two programs. Glen Lake and Boyne City remain in the district’s other half after lopsided wins.

“Our kids have been working hard and we fought hard all year,” Tunney said. “I know everybody got into the playoffs, but I think the kids earned it last week by beating Ogemaw Heights. It’s good to see their hard work pay off.”

Ike Koscielski hit Cooper Taylor on a comeback route, and Taylor spun by a Viking defender for a 22-yard touchdown to pull the Huskies within 7-6 early on. Koscielski connected with Taylor on a second-quarter TD as well, this one from 36 yards out.

Sixteen Huskies players from the last meeting four weeks ago did not play Friday — 13 from COVID quarantine and three more with injuries.

Koscielski threw for 183 yards, Nate Childers led the Huskies in rushing with 61 yards and also intercepted a pass and Taylor caught all eight of Koscielski's completions for 183 yards a two TDs.

In the earlier meeting, the Vikings threw three interceptions and fumbled once, with two of the picks leading to Huskies touchdowns.

SHOCK TO THE SYSTEM: AEDs in schools increasing

TRAVERSE CITY — Reid Ruggles witnessed an athlete die on the court once, and doesn’t want to…