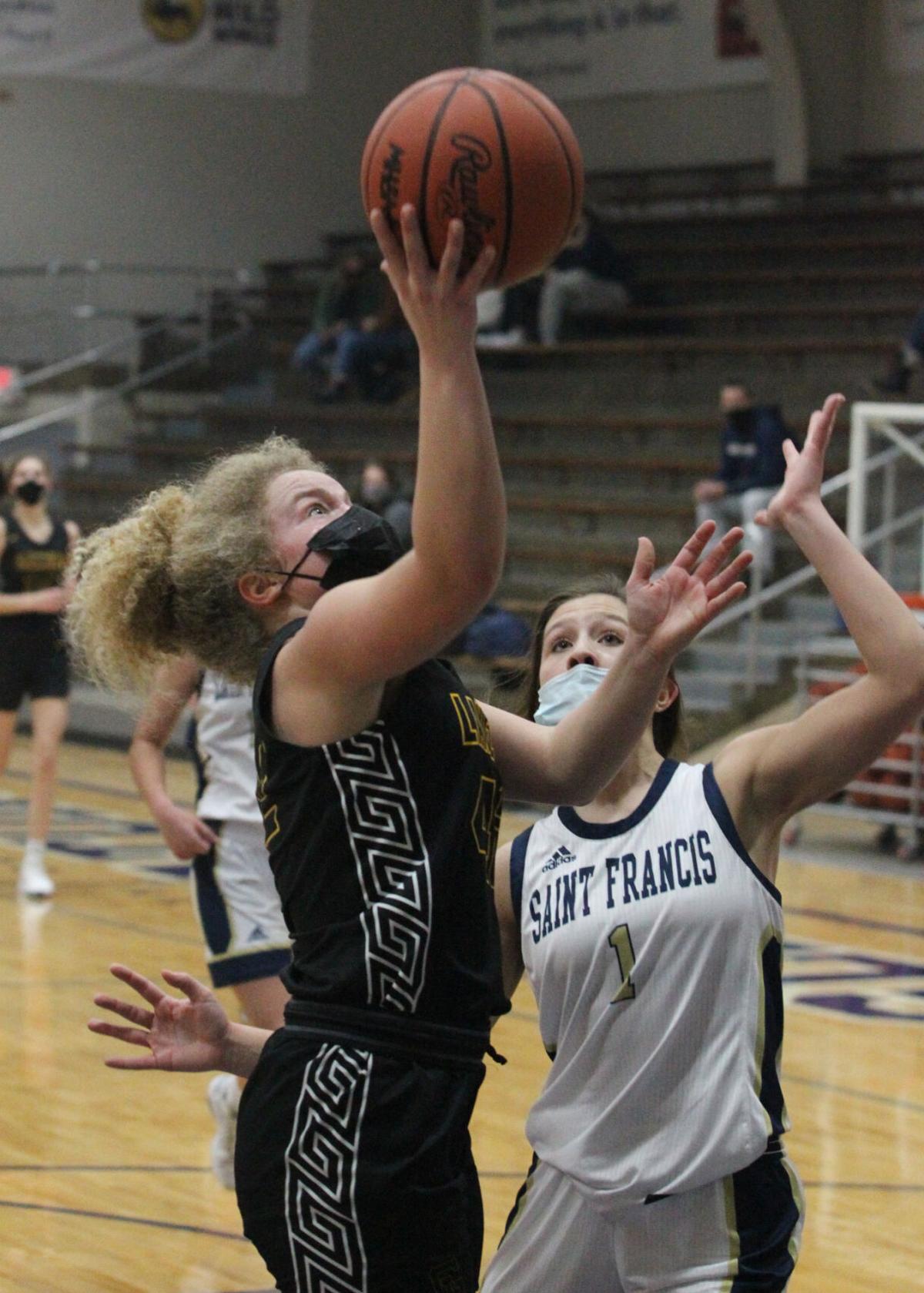 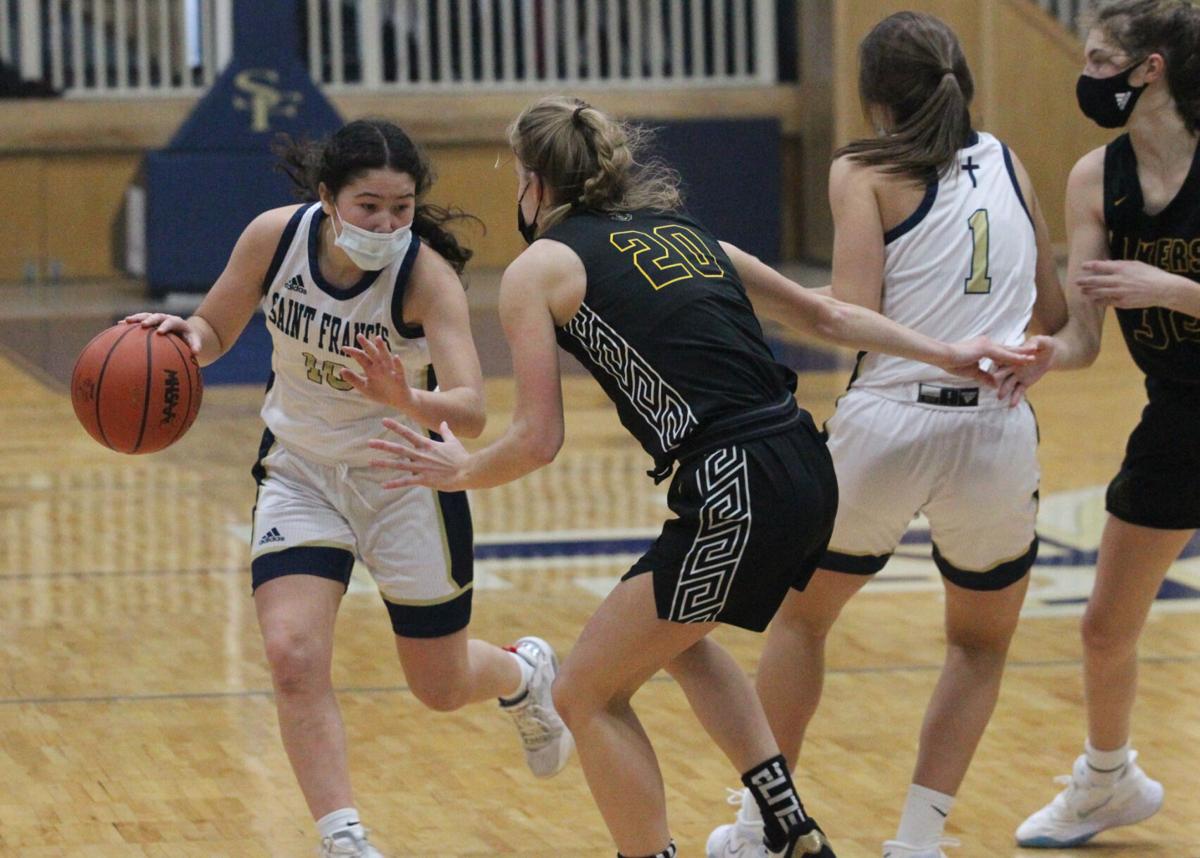 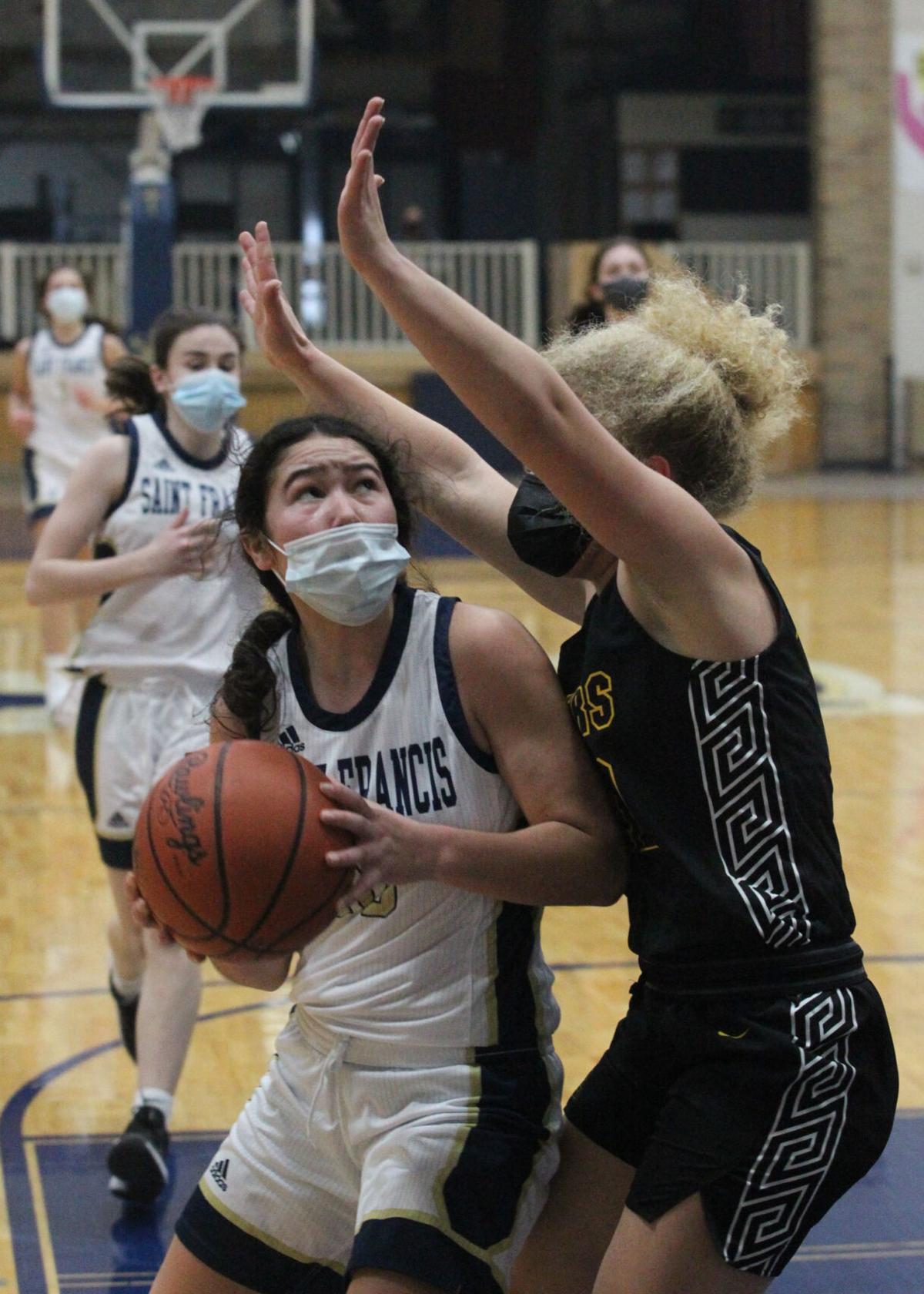 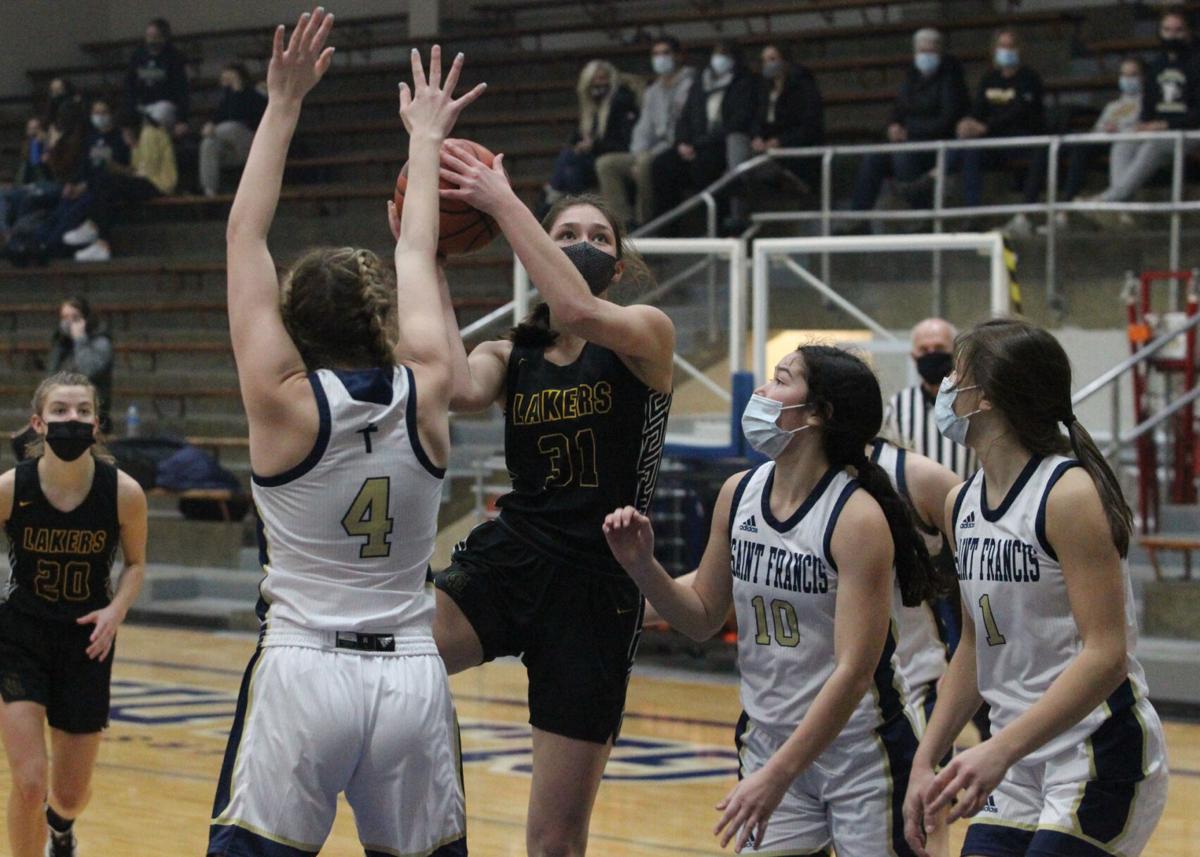 Glen Lake junior Grace Bradford (31) goes up for a shot between a host of TC St. Francis defenders in a non-conference game Saturday at TC St. Francis. 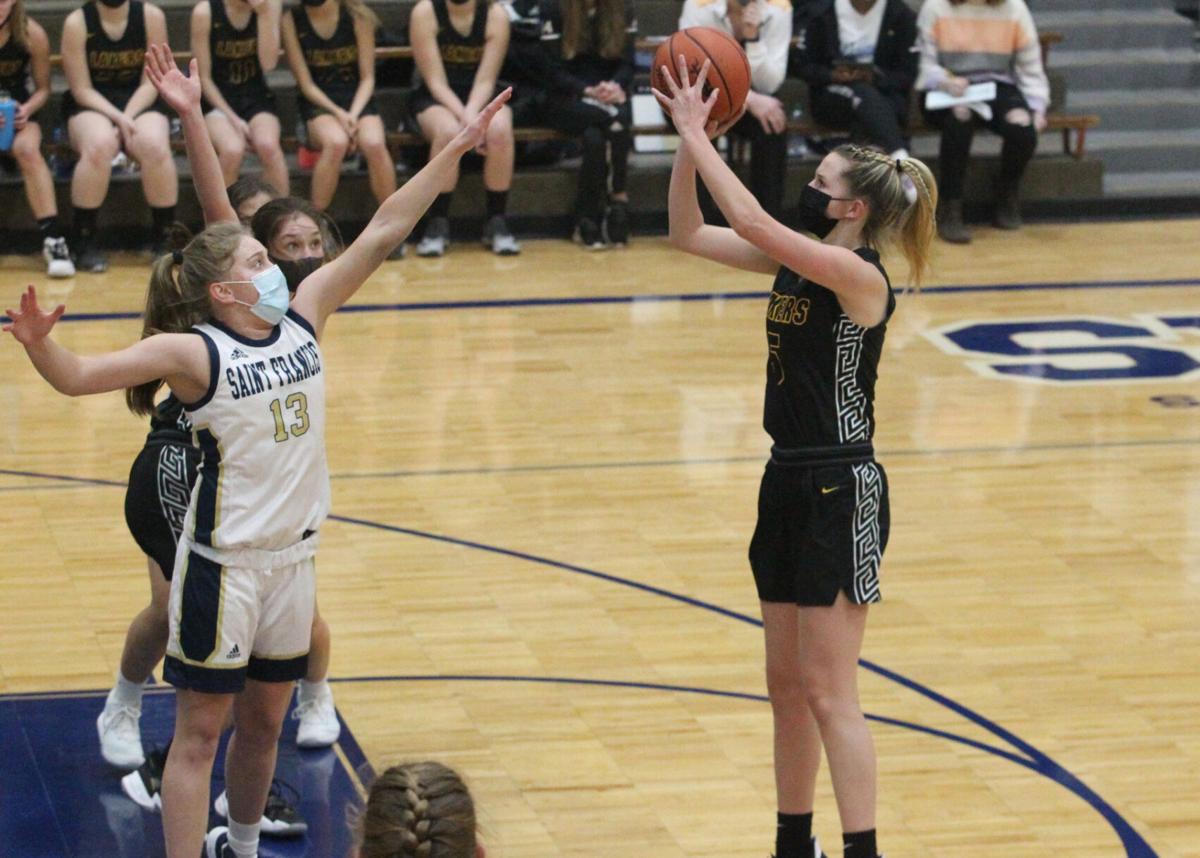 Glen Lake junior Grace Bradford (31) goes up for a shot between a host of TC St. Francis defenders in a non-conference game Saturday at TC St. Francis.

The Gladiators’ girls fell short of the visiting Glen Lake Lakers in a mid-afternoon contest that ended in a 52-23 rout.

The Lakers (3-0) shut down the Glads’ star for the duration of the game thanks to some early foul trouble. St. Francis sophomore and starting guard Gwyn Bramer was on the bench less than 90 seconds into the contest with her second foul, tossing a wrench into TCSF head coach Tyler Schell’s plans to break the relentless Glen Lake press.

Lakers junior Grace Bradford netted three points before Cora Pomaranski nailed a layup for the Glads before Bramer took a seat and the rout began. The Lakers press forced turnover after turnover from the Glads to spark a 8-0 run that would give them all the cushion they would need. The Glads needed to find a way to move the ball up the court down a starting guard and those duties fell on Maggie Napont.

“We came out with intensity and were pressing but they (TCSF) adjusted well,” Glen Lake head coach Jason Bradford said. “Our girls adjusted really well to that and rattled them a little bit more.”

The Lakers took the term “fast break” and ran with it Saturday, sometimes too quickly, according to coach Bradford. The Lakers netted nine fastbreak buckets off the steals created from the press, ballooning the first-half lead to 34-12.

The experience difference between the Lakers and Glads was apparent throughout the afternoon and Schell said his team knew what to expect.

“We knew this was going to be a challenge coming in. They basically lost one player from last year,” Schell said. “That team has been playing together for the past couple of years and they are just getting better and better.”

The Lakers boast seven seniors on their squad, three of which are starters, and bring back four of five starters that were on their way to a regional final last season. The Glads, on the other hand, started three sophomores, a junior and freshman and are devoid of seniors in 2021.

“At the end of the season, I think we will be a completely different team,” Schell said. “The part we need to get better at is meshing that youth with the experience that we have.”

Grace Bradford led the Lakers with 20 points and 12 rebounds, while center, Grace Fosmore snagged eight boards. The offensive rebounding for the Lakers is a focus, according to Bradford, and the first possession of the game showed that. The Lakers’ first basket came off of two consecutive offensive rebounds, setting the tone for the afternoon.

“We go with the rule that every rebound is worth another two or three points,” Jason Bradford said. “You figure it’s a ball out of their hands and another shot we can get, so that’s why we always look at it.”

The Lakers combined for 16 offensive rebounds as a team, leading to second-chance points that made a quick difference.

Maggie Napont led the Glads with 10 points, while Bramer scored four, all coming from the free-throw line.

The Glads move to 2-1 on the season after two victories to start the year and head to East Jordan Tuesday.

“They know where the bar is set and Glen Lake definitely set the bar high tonight,” Schell said. “That gives us something to shoot for.”

The defense from the Lakers and its ability to shut down Bramer was key, according to Fosmore.

The hot start for the Lakers is only the beginning after they had a shot at a regional crown taken from them last year.

“This year, we’re really working hard because we really want to be state champs,” Fosmore said. “I think we could do that this year. I mean with the length and the size ... the everything.”

TRAVERSE CITY — Traverse City St. Francis took no time rebounding from a weekend loss to Division 1 River Rouge with a 56-32 victory over East…