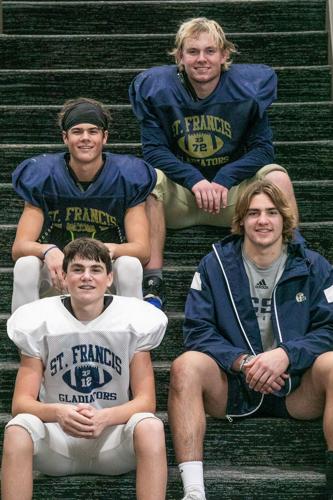 Clockwise from top right, Traverse City St. Francis’ Ryan Henning-Neumann, Garrett Hathaway, Tyler Endres and Noah Endres have fathers who have played in the state title game. Ben Stallman, not pictured, also had his father play on the 1992 championship team. 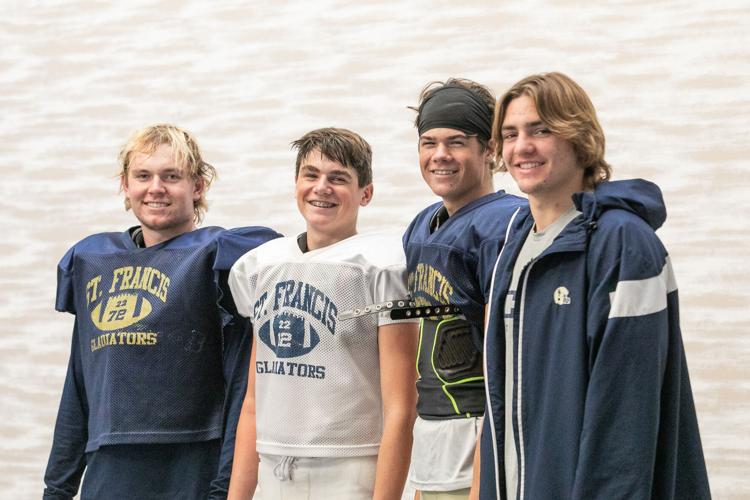 From left, Traverse City St. Francis’ Ryan Henning-Neumann, Tyler Endres, Noah Endres and Garrett Hathaway all have fathers who have played in the state title game. Ben Stallman, not pictured, also had his father play on the 1992 championship team.

Clockwise from top right, Traverse City St. Francis’ Ryan Henning-Neumann, Garrett Hathaway, Tyler Endres and Noah Endres have fathers who have played in the state title game. Ben Stallman, not pictured, also had his father play on the 1992 championship team.

From left, Traverse City St. Francis’ Ryan Henning-Neumann, Tyler Endres, Noah Endres and Garrett Hathaway all have fathers who have played in the state title game. Ben Stallman, not pictured, also had his father play on the 1992 championship team.

Just a few are even more so.

Five St. Francis players have dads who played for state championships in their own football days.

Kevin Endres, the father of brothers and St. Francis players Noah and Tyler Endres, caught a touchdown pass in the Gladiators’ 1992 double-overtime 28-21 championship win over Harper Woods Bishop Gallagher, a school that isn’t even around anymore.

The Gladiators get a crack at another championship on Saturday. They depart for Detroit at 8:45 a.m. Friday, heading to Mount Pleasant to practice in Central Michigan University’s indoor facility before spending Friday night in Detroit and meeting Jackson Lumen Christi for the Division 7 crown at 10 a.m. Saturday.

Matthew Stallman, the father of junior defensive lineman Ben Stallman, was also on the 1992 title squad.

Matthew didn’t play in the 1992 game as a sophomore lineman but became a bigger part of the game’s history when a photo of him helping up Gallagher star player James Story ran in the Flint Journal. Stallman consoled Story after the final horn sounded in the Pontiac Silverdome, a building which like Bishop Gallagher High School, no longer exists.

“That was one of their premier players, and he was sitting in the end zone in disbelief,” Stallman said. “I helped him up and told him it’d be all right.”

Ben Stallman, who mostly plays on special teams units, said he learned from his dad that helping your teammates is a big responsibility for non-starters.

“If you don’t get a chance to play like my dad didn’t when he won it in ‘92, it’s every day in practice,” Ben Stallman said. “You have to provide what you can by being part of the scout teams, by encouraging the starters and providing every piece of encouragement, every piece of physical encouragement you can to really prepare the starters for the biggest game of their lives.”

“I’ve never stayed anywhere that overnight for football,” Ben Stallman said. “So that’s going to be a interesting little ripple, but hopefully it won’t affect our gameplay and we just do what we have to do.”

Part of the team’s preparation has been adjusting to the warmth inside Ford Field after playing outdoor games in wintry conditions throughout the playoffs. The Gladiators wore hoodies inside while practicing at the Grand Traverse Resort on Tuesday and Wednesday.

Endres warned his kids about the indoor stadiums being much warmer than you’d expect on the playing surface, although Ford Field’s artificial surface isn’t as hard as the Silverdome’s Astroturf — which was like playing on a concrete putt-putt golf course.

“He said it was pretty rough because they used to play on the Astroturf, so he didn’t really like it,” Gladiators freshman quarterback Tyler Endres said. “And he said it was super hot. That’s probably what it’s going to be like for Ford Field.”

Endres was a junior tight end on the 1992 team, hauling in a 27-yard touchdown pass in the fourth quarter on a halfback pass from Paul Gauthier on 4th-and-7 with 8:18 left in regulation, a score that forced overtime. Greg Vaughan, a former coach with St. Francis and Traverse City West, played on the offensive line for the Glads in that game, and also kicked the extra points.

“He would just tell us that he caught the winning touchdown that year and brag to us,” Noah said of his dad. “He always teaches us to fight through everything, know your assignments, play hard and low.”

“It’s 30 years gone by in the blink of an eye,” he said. “The experience can change kids’ lives. It really is one of the things that will stick with you forever.”

He recalled the Silverdome’s hard artificial surface being painful to play on. The team practiced indoors at Northwestern Michigan College’s gym, and the entire team has to buy soccer shoes just for the finals because their spikes wouldn’t fare well on the Silverdome field.

Jason Neumann, a junior on the 1999 title-winning tea that beat Gobles 23-6, even shares the same number with his some, Ryan. Both donned No. 72, although Ryan had to wait awhile until kicker Brice Kempf graduated to get his desired jersey.

“Not many people get to know exactly when your last football game will be,” Jason Neumann said. “I told him to stay focused. Enjoy it. Take it all in and try not to be star-struck. It’s a lot when you walk onto the field.”

Ryan Henning-Neumann was one of three sophomore starters on the Glads’ offensive line in 2020 against New Lothrop, along with Devin Town and Joey Donahue, who since moved to fullback.

Chris Hathaway, the dad of St. Francis senior running back Garrett Hathaway, started at quarterback for Traverse City Central’s 1985 state championship team. Garrett is the youngest of his three sons and the last shot at both generations winning state crowns.

“They’ve been chasing that and all three have been trying to get there for a while,” Chris Hathaway. “This team is very balanced and has a lot of different weapons. They’re very similar to the ‘85 Trojans.”

St. Francis plays Lumen Christi in the title game, a rematch of their game in Jackson a dozen weeks ago that the Gladiators won 42-35. TC Central also played a foe twice on its way to the state title, beating Muskegon in the opening in a snowy game on Thirlby Field.

The entire Hathaway family will be at Saturday’s game, with one exception. Spencer Hathaway plays in the NAIA postseason that day, with his No. 5-ranked Indiana Wesleyan squad hosting No. 13 Avila University at 1 p.m.

“My mom has been talking about it a lot,” Garrett said. “It’s a really cool experience. I was there two years ago, but I was on the sidelines, so it’s going to be a lot more fun to actually get to play this time. But when it comes to game time, we have to forget about all the special stuff going on and just play football.”

St. Francis’ 2020 trip to the state finals ended with a 42-35 loss to New Lothrop, the team they whipped up on last week, 53-8, to book a trip to Detroit. The Glads are hoping for a better result this time, and the fans should have a much better experience without COVID-19 restrictions limiting the number of fans and how close they could sit.

Garrett said his father has been a “proud dad.”

“He really wanted it to happen because he won one, so he’s been telling me about his experiences and how you know it’s your last game and you have to give it all you’ve got,” he said.

But if he won the elusive second-generation title, Garrett will think twice about bragging too much to his older brothers who never had the chance to play at Ford Field.

“My brothers have been beating me up my whole life,” Garrett said. “So if I say something, they might do something. But it’d be really cool to rub it in their face.”

The Get Around Episode 235 — Cadillac's Carissa Musta & Jozz Seeley

It's championship week here on the Get Around!

The Get Around Episode 234 — Traverse City St. Francis' Joey Donahue and Ryan Henning-Neumann

The Get Around Episode 232 — Playoff Madness is Upon Us!

CLARE — It was almost like four years ago, but much better being on the other side.

TRAVERSE CITY — Tim and Shelley Quinn had a big decision to make.

TRAVERSE CITY — The Gladiators could have taken the week off. It’s a good thing they decided…

Traverse City St. Francis backs up No. 1 ranking with 49-12 victory over Kingsley

JACKSON — The road near Jackson Lumen Christi’s campus is under construction for paving.

DETROIT — Traverse City St. Francis’ own dominance may have been its downfall.