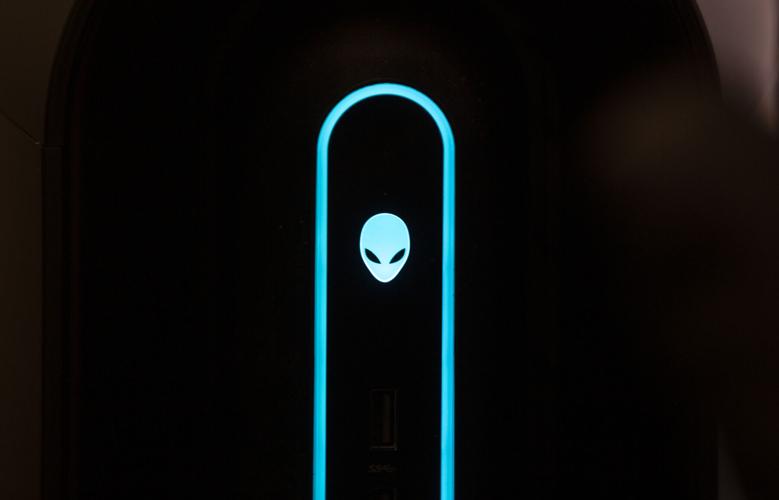 A computer sits on a table in NMC's West Hall Innovation Center in Traverse City on Friday. 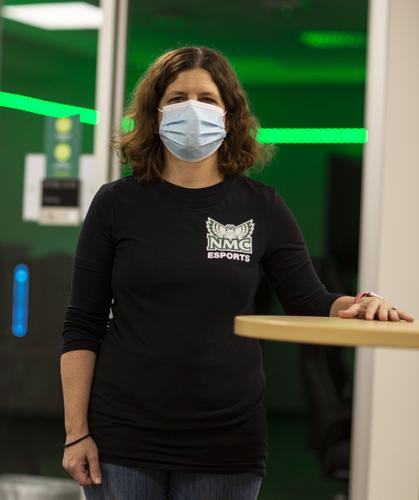 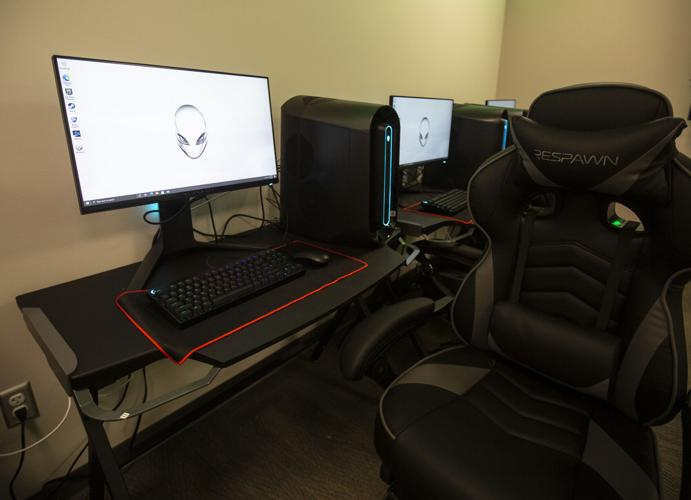 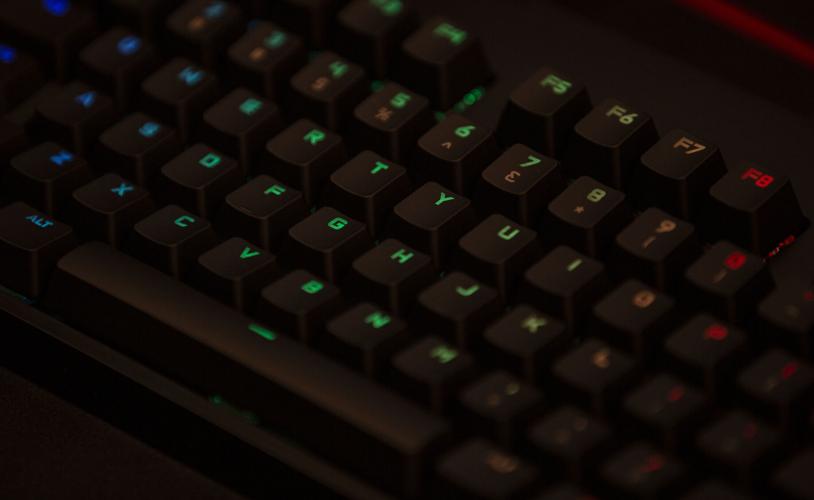 A keyboard sits at a gaming station in NMC's West Hall Innovation Center in Traverse City on Friday. 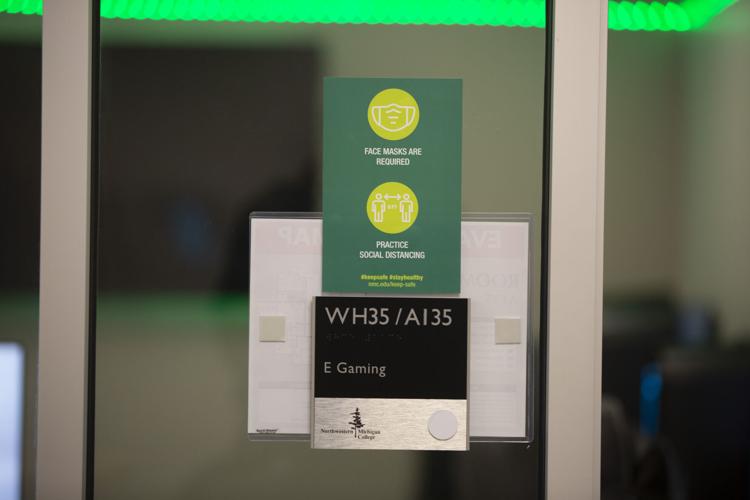 The entrance to the eSports room in NMC's West Hall Innovation Center in Traverse City on Friday.

A computer sits on a table in NMC's West Hall Innovation Center in Traverse City on Friday.

A keyboard sits at a gaming station in NMC's West Hall Innovation Center in Traverse City on Friday.

The entrance to the eSports room in NMC's West Hall Innovation Center in Traverse City on Friday.

TRAVERSE CITY — It all started with a Discord whiparound during the Hawk Owls Rocket League tournament last fall.

“Why don’t we apply for funding?” Luz Del Angel, one of the founders of the Northwestern Michigan College esports club, recalled a member say.

Months later it’s not just a discord, nor just a vehicular soccer game — esports at Northwestern Michigan College becomes a path to a scholarship.

NMC announced this week the launch of a varsity esports team, making it the Traverse City school’s first intercollegiate team in decades. The Hawk Owls begin recruiting this spring and summer to compete the following fall.

Students on varsity teams receive $1,000 in total scholarship money ($500 each for fall and spring semesters) and get dedicated coaching and development.

Del Angel anticipated the timeline to take at least a year — definitely not one semester — when their friends talked seriously about hosting a varsity team.

“I didn’t think it would be this quick,” Del Angel said. “I did not expect us to get the funding right away, I thought we’d have to plan it out over time.”

The Hawk Owls practice and compete in a newly-renovated esports lab in their West Hall Innovation Center. So far, lights and computers occupy the place, but the rest remains under construction.

“It feels really good to have the mascot and have something cheer for, someone to cheer on and give us the ability to not only compete against fellow two-year schools in the state, but also four-years in the state and in the country at some point,” said Teri Gustafson, NMC’s Esports Advisor.

Gustafson said NMC’s esports program grew to be one of the school’s largest in membership — 93 students strong.

Del Angel, a third-year NMC student, said the club’s request to the university was initially funding for events. Over time that led to scholarship funding for the Hawk Owls’ varsity team.

“Everyone was up for it. Terri was like ‘Totally,’” Del Angel said. “Now we’re here.”

Gustafson said discussions about offering esports to students in any capacity stated about 18 months ago. When the coronavirus pandemic paused most in-person gatherings on campus, a lot of those discussions stopped.

In the fall, Gustafson advised the school’s esports club to give students a way to connect and feel social on a virtual campus where in-person student activities were less active. It was an instant hit.

“Once that started and we saw a significant student interest, we started to lay the groundwork for getting varsity going,” Gustafson said. “After consulting with some other schools across the state and other conferences, it really helped pave the way that moving to varsity was the great next step to take.”

The beauty of esports is state and national competitions don’t have to come with logistical nightmares like travel and lodging. That means NMC student athletes could compete against a junior college in California one day and the Michigan Wolverines the next.

Famously, Robert Morris University in Illinois became the first to offer scholarships specifically for League of Legends in 2014. It advanced to the inaugural intercontinental national championship in 2016, but lost to the University of British Columbia.

NMC expects about 13 student-athletes in its first year of competition and will hire coaches for each of the two teams. The Hawk Owls also hired a consultant with head coach experience at one of Michigan’s Mid-American Conference programs to aid the transition to a varsity program.

Del Angel said prospective student athletes do not necessarily have to be a professional at a certain game; they just have to have the teamwork skills and effort in the classroom.

Student-athletes must maintain a 2.0 grade-point average and be a full-time student to retain eligibility.

“You have to be decent at the game, but you also have to have like teamwork and knowledge,” Del Angel said. “It’s kind of like an actual sport. You could be perfectly good at the game like shooting hoops and stuff, but if you don’t have teamwork skills, that’s going to make you lose the game.

“It’s kind of less skill-based and more teamwork-based. Anyone can sit at their computer and learn how to move a character or press buttons.”

“There’s really a wide range of schools that compete against each other,” Gustafson said.

The MEC streams Rocket League, Overwatch, League of Legends, Counter-Strike: Global Offensive and Rainbow Six: Siege. Del Angel said the varsity program is looking at Overwatch to compete in with its varsity program.

Schools affiliated with the NJCAAE can compete state to state depending on school enrollment and skill level.

“They focus on the uniqueness. You only have your student athletes for two years,” Gustafson said. “It gives you an opportunity as a two-year school to join a national conference but not compete against some of the schools that have some more resources.”

Del Angel finishes their classes at NMC this summer, but nonetheless is excited to help give students that are now middle and high schoolers a chance to earn scholarships for playing video games.

“Let’s say the program’s already set in stone when I started being a student, I would be so happy,” Del Angel said. “I’m happy that we were able to make this happen for future students ... they’re definitely going to be excited that Traverse City, a community college, is going to have a varsity program.”

“Many of them may have a goal to compete professionally in esports, which is a very real thing with the way things are going,” Gustafson said. “I’m really looking forward to helping them get there if they have that path and giving them a way to get there — but also working with them to help them build skills in regular skills after they graduate with teamwork, communication and leadership.”

TRAVERSE CITY — Traverse City Central picked up its first win of the season in girls soccer,…

A program information night will be held via Zoom at 7 p.m. Tuesday, April 13. Details about the program, including collegiate esports requirements and a timeline for recruiting will be discussed. Register in advance for the meeting:

AUBURN HILLS — Traverse City West got back on the winning track, pulling out an 8-1 victory over Auburn Hills Avondale following a close 12-9 …

PETOSKEY — Keagan Fischer’s trajectory might have changed if this opportunity was available earlier.