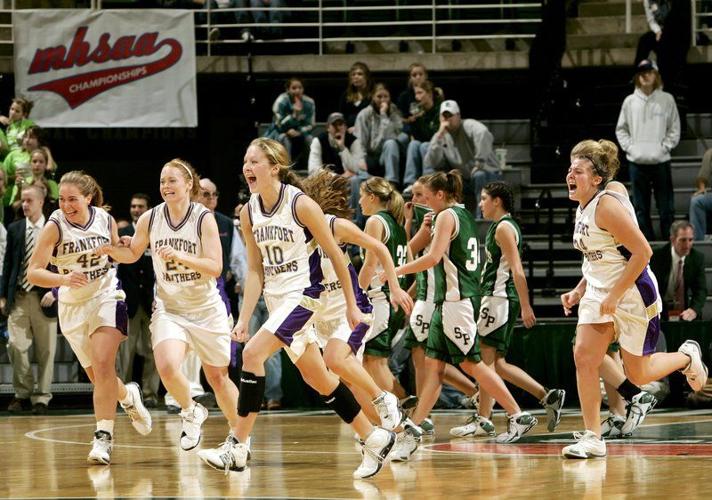 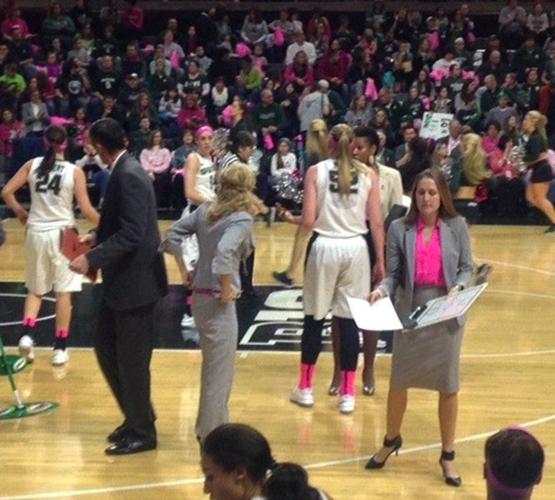 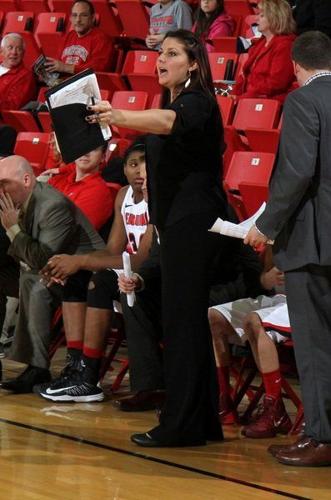 Submitted photoBrenna Banktson provides instruction from the bench as an assistant coach for the Youngstown State women's basketball team.

Submitted photoBrenna Banktson provides instruction from the bench as an assistant coach for the Youngstown State women's basketball team.

The two also shared a vision in those days.

“We used to joke that Rez (Frankfort basketball coach Tim Reznich) was going to get a head coaching job at a D-1 school and hire us as his assistants,” Marshall said.

While Reznich continues to crank out quality teams at Frankfort — he’ll lead his top-ranked Panthers into the state tournament Monday — Banktson and Marshall are, in fact, pursuing their own dreams in the coaching profession. Banktson is a second-year assistant at Youngstown State, Marshall a second-year grad assistant at Michigan State.

It’s a step in their lives that comes on the heels of successful playing careers at the collegiate level.

Banktson, Miss Basketball in 2006, caught a break after graduating from Western Michigan, where she finished her career 18th in points (1,090) and fifth in 3-pointers (133). A coach from Mid-American Conference rival Kent State called to ask if she would be interested in the Director of Basketball Operations job there. Banktson flew down to Ohio for the interview and two days later accepted the offer. She was on her way.

“You get your foot in the door and work your way up,” she said. “It’s all worked out for me — luck and timing.”

After a year at Kent State, Banktson left and took the same job at Western Michigan. A year later, she landed in Youngstown, her first coaching position. The Penguins took a 19-7 record into Saturday’s home contest with Green Bay.

“It’s awesome here,” Banktson said. “The people are great and obviously our team is doing really well. I’ve learned a ton and I continue to learn every day. I wish as a player I knew what I know now. It would have helped me a lot. I love it. It’s a fun job. It’s not like I’m working because it’s something I love to do.”

Banktson’s responsibilities include player development, scouting, recruiting, advising, overseeing summer camps and serving as a liaison with the compliance office.

“You don’t realize how much behind-the-scenes stuff there is to do,” she said.

Breaking down film and developing game plans is a favorite part of her job.

“I enjoy figuring out what the other team is doing, what we need to do, and then making detailed (strategies) for each player,” she said.

“It’s her work ethic,” he said. “Brenna was not an outstanding athlete. Yet she scored over 2,000 points in high school, over a 1,000 in college. She worked hard on her game and that (enabled) her to compete at the highest levels. It’s no surprise to me to see how well she’s doing.”

Marshall had plans to continue her playing career overseas after graduating from Lake Superior State, where she set school records for 3-pointers in a game (7) and season (55). But a back injury prevented that from happening. Marshall had two surgeries to repair ruptured discs and wore a back brace her senior season.

Now, Marshall is starting to climb the coaching ladder, too. She worked in the athletic administration office at Northwood University for nearly two years and coached the Midland Dow JV for one season.

Then an opportunity to join Suzy Merchant’s staff at Michigan State as a grad assistant came into play. Marshall jumped at the chance.

“What I love most is being at a Big Ten school,” she said. “It's a great experience, learning from some of the best coaches in the industry. It's a great group and I learn something new every day. It's a great gig.”

Marshall works with the managers and scout team. She also assists in scouting.

“I've learned a lot in the two years I've been here,” she said. “It's a tough job, but the love I have for basketball makes me love what I do. I've learned that one loss shouldn't affect your whole season. You learn from it, watch some film and move on. The next game is just as important.”

Marshall still plays “for fun” and helps Reznich with his summer camp.

“She has an absolute love for the game,” Reznich said. “She has such depth of knowledge. We worked a camp in Highland Park one year that had about 250 kids. As soon as Coley started talking, they all gravitated to her. She’s a natural. She’s a people person.”

Marshall will finish her masters in kinesiology in May and is actively seeking a job as an assistant coach or as a Director of Basketball Operations.

A third cousin, Jenny Loney, who was on the 2005 state title team and played with Banktson at Western Michigan, is now involved in coaching, too. She and her mother, Kate, are working with 5th and 6th graders at Frankfort, a group that includes Reznich’s daughter Lucy. Meanwhile, Banktson’s father, Jeff, is coaching a boys’ 8th grade team that includes Reznich’s son, Jack. And Jenny Loney’s brother, Dan, has been running the Frankfort varsity team in the absence of Reggie Manville, who had hip replacement surgery.

As for Banktson and Marshall, any chance of a reunion — this time as coaches?

“We always talked about playing together in college,” Marshall said. “It would be awesome to coach alongside each other.”