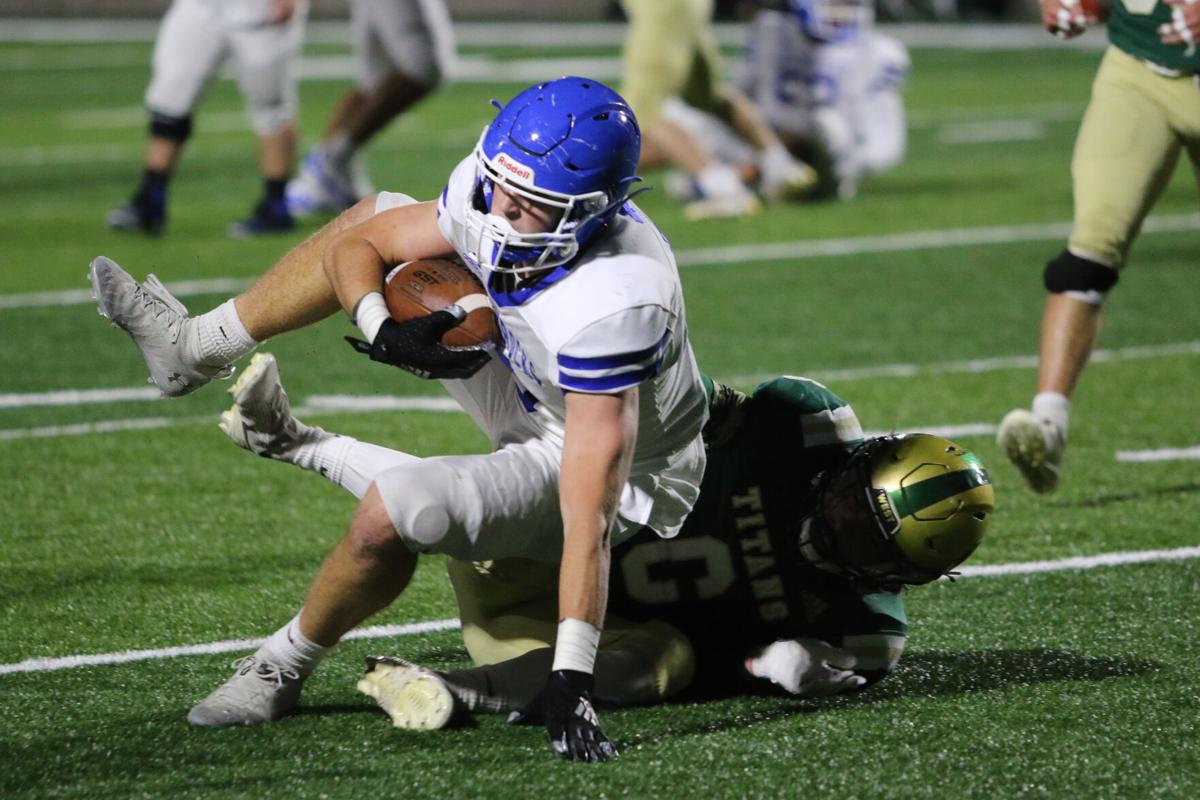 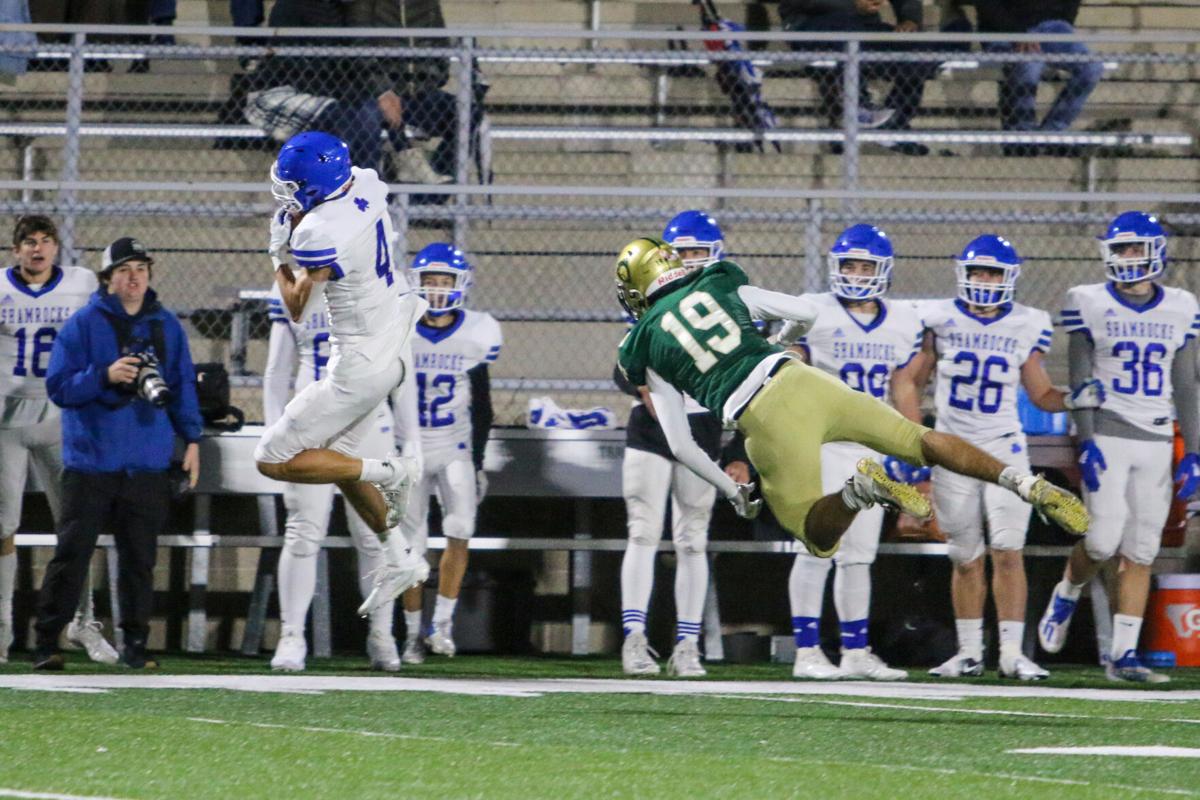 Detroit Catholic Central’s Owen Semp leaps to grab a pass for a touchdown during Friday night’s game at Thirlby Field. 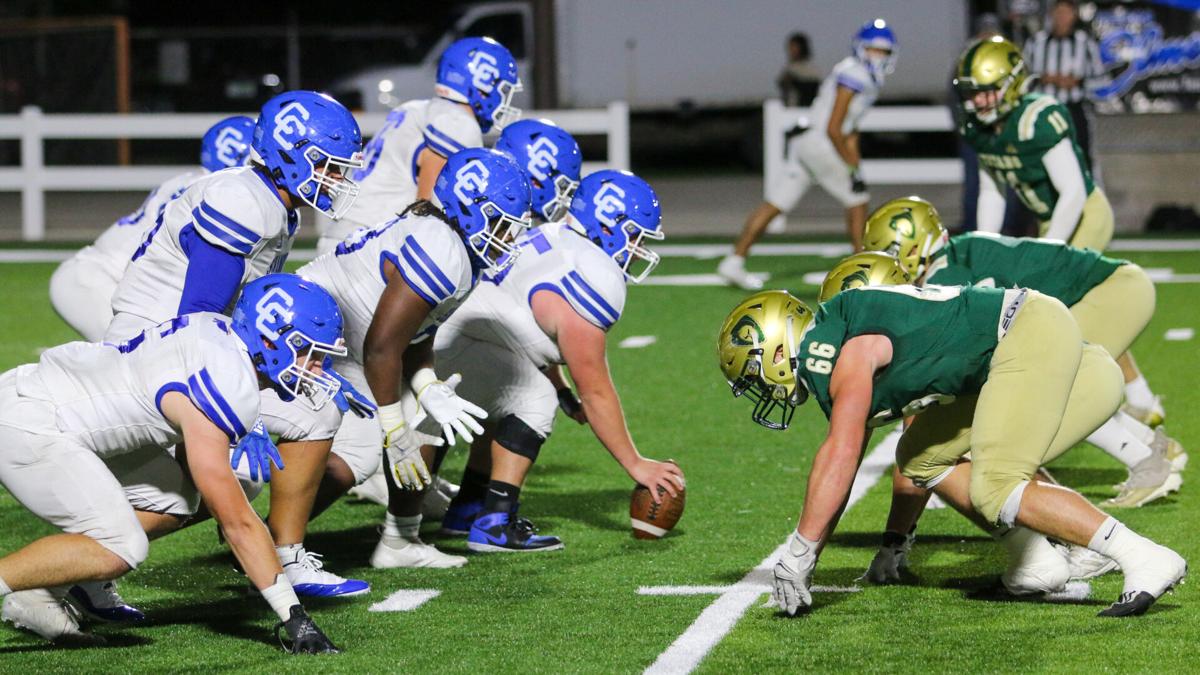 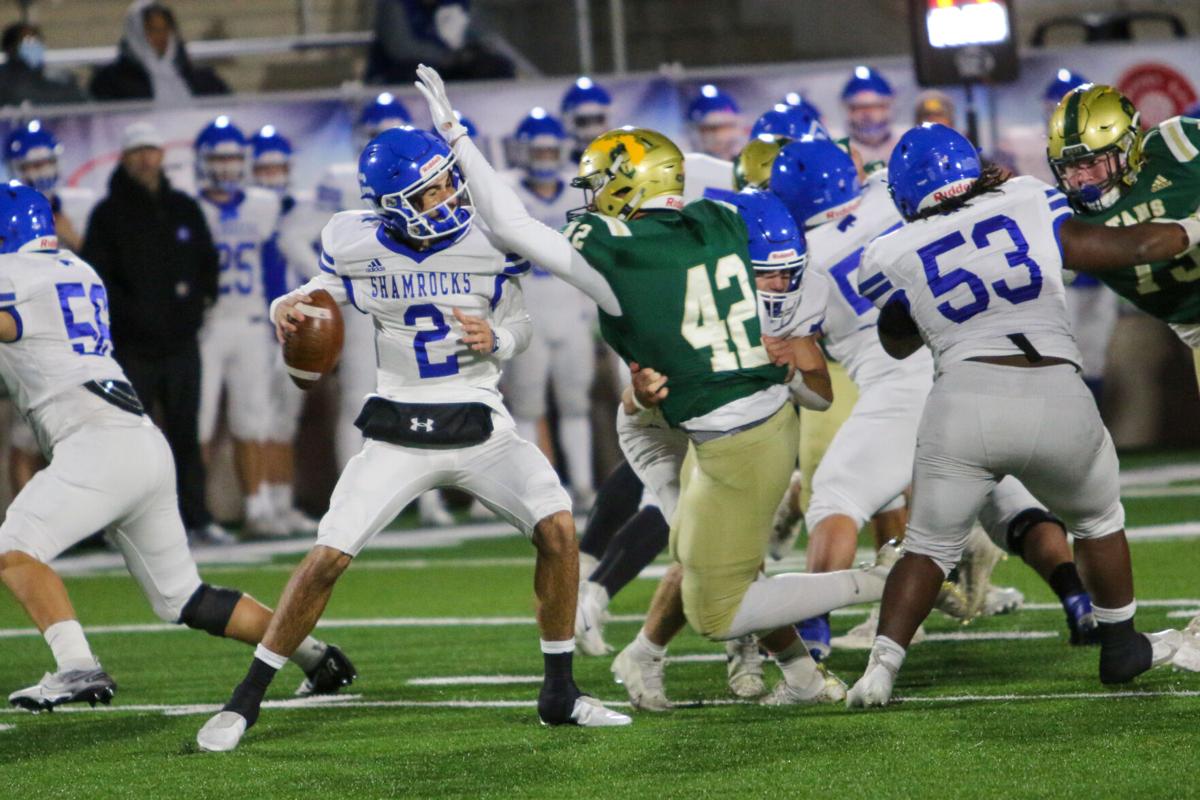 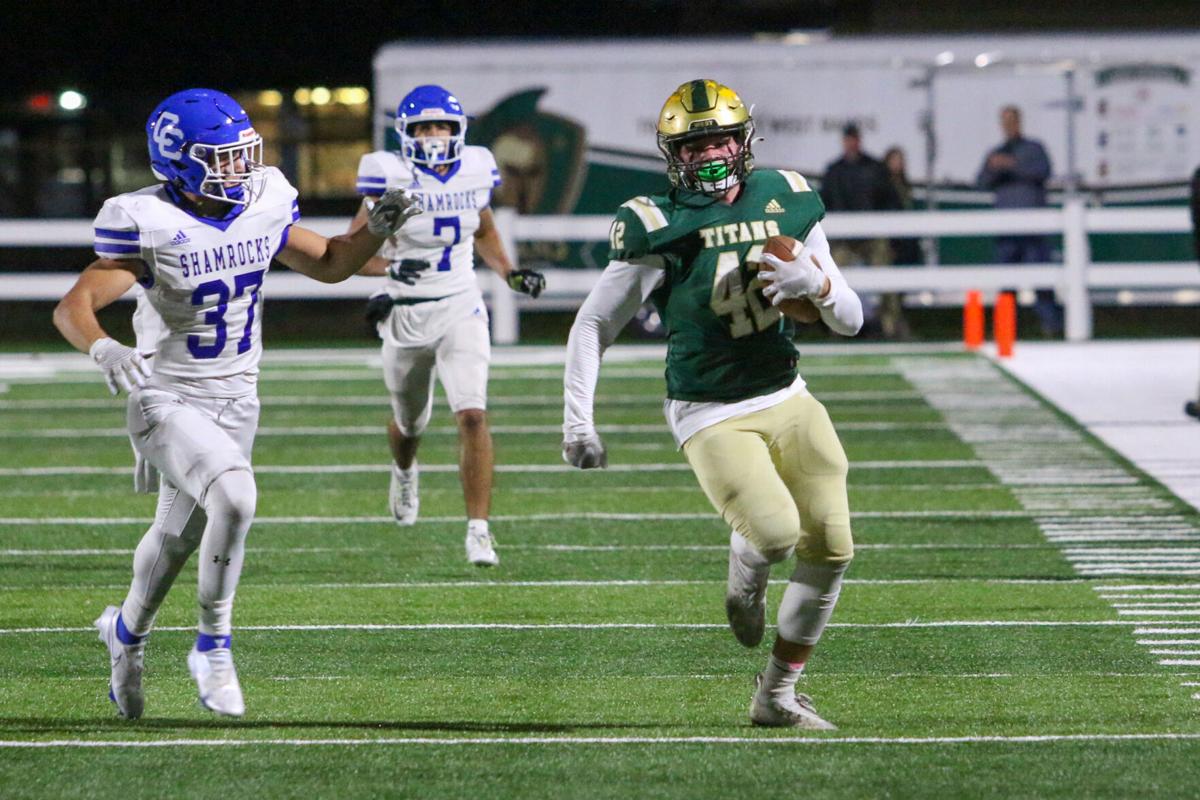 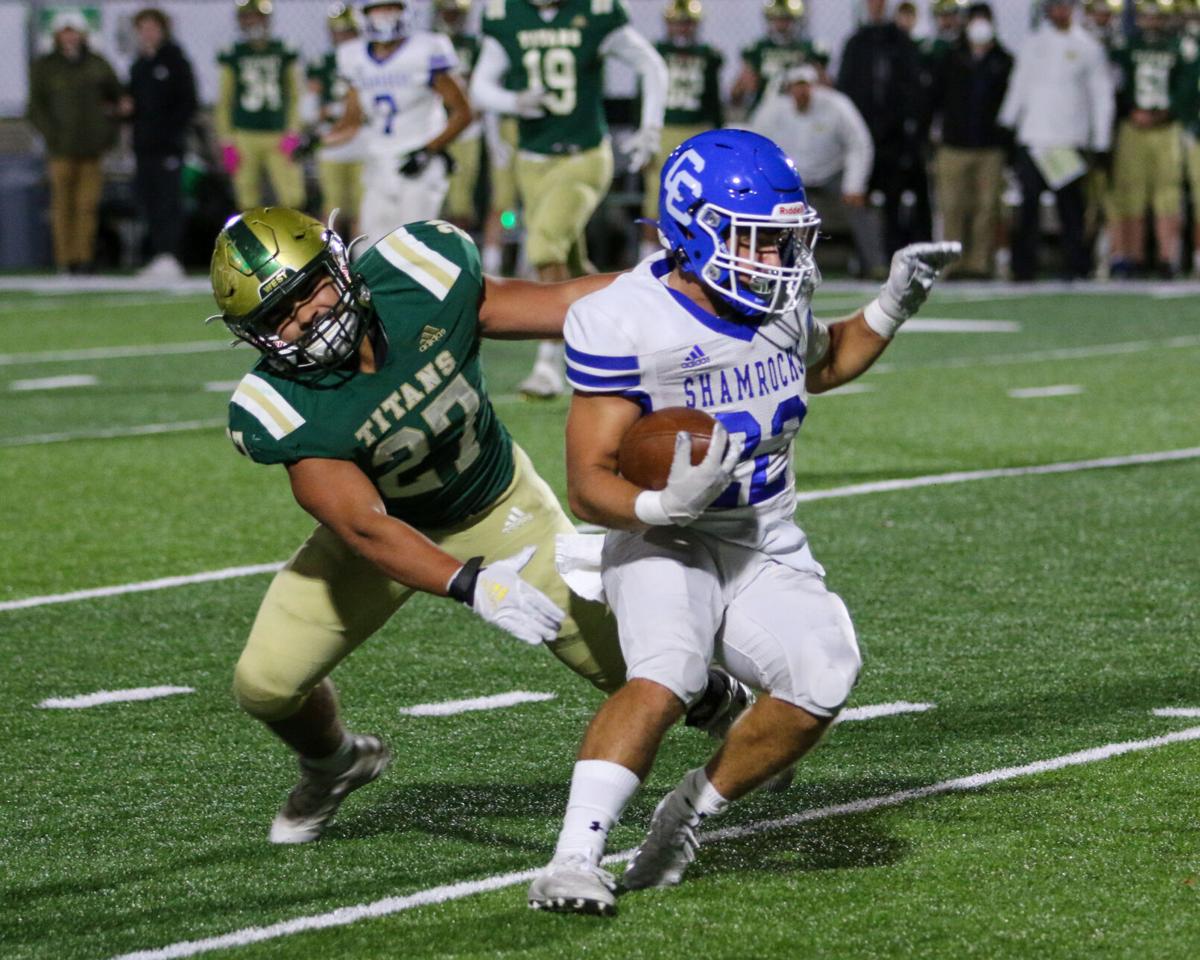 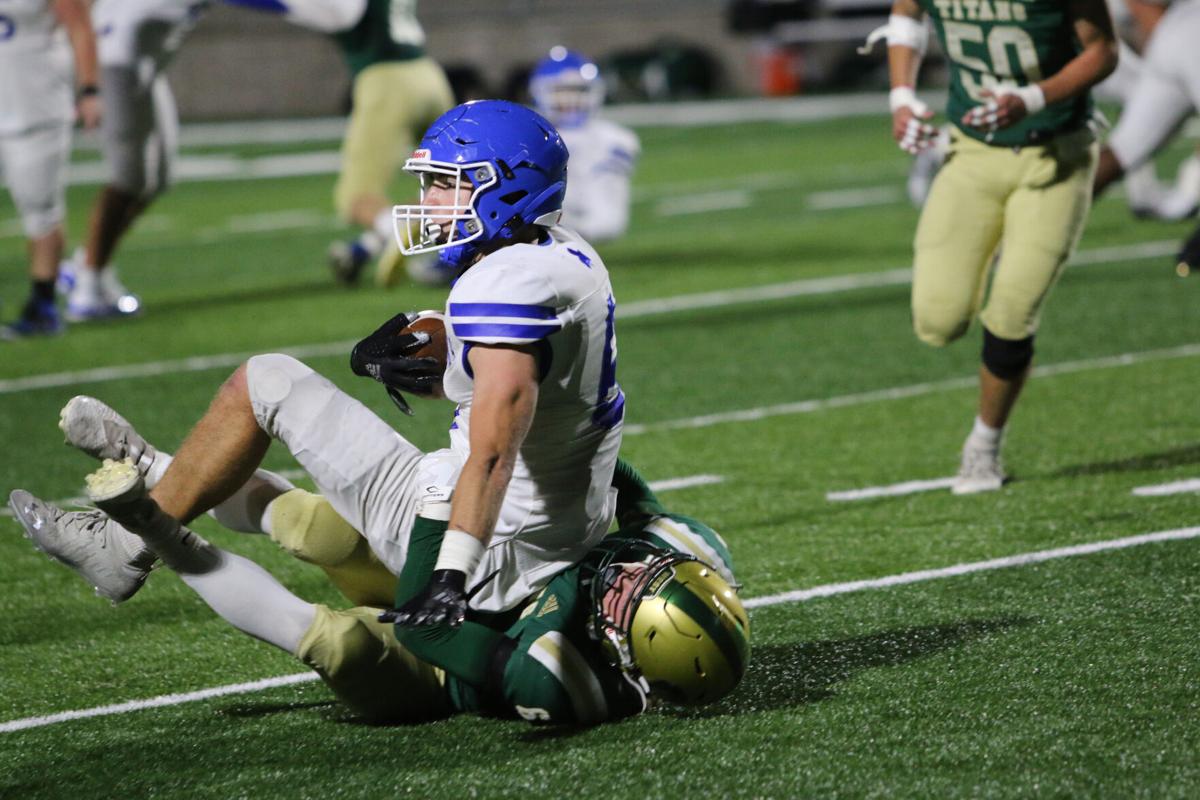 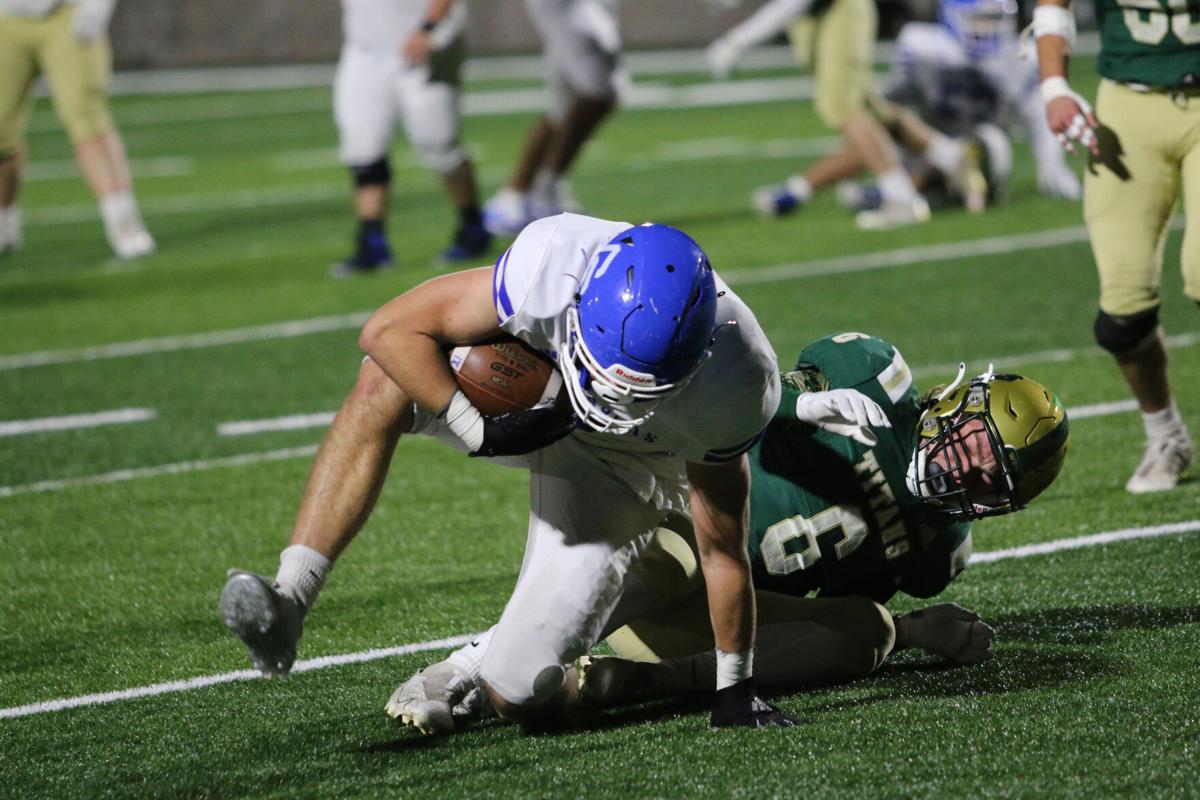 Detroit Catholic Central’s Owen Semp leaps to grab a pass for a touchdown during Friday night’s game at Thirlby Field.

TRAVERSE CITY — A handful of Traverse City West players took an extra minute to look at the empty Thirlby Field stands outside their own locker room following a senior night loss.

Detroit Catholic Central beat the Titans 28-2 Friday night in a 3-hour game full of penalties, all but ruling out the Titans’ chances to host a first-round playoff game next Friday.

The two teams combined for 288 penalty yards on 24 flags on top of Titans’ defensive effort that mostly shut down the Shamrocks’ run game. That, along with a few big plays from DCC’s star power, will lead West into the playoffs on a two-game losing skid after a setback at Marquette.

“Tonight’s a story of penalties. Not just 5-yarders, but big penalties that crept back on us from last week,” Titans’ coach Greg Vaughn said.

Both teams were heading into Friday night eyeing a hefty amount of playoff points on the line. Whether or not the Titans (6-3) would make the playoffs — win or lose Friday — was never in doubt, but the loss now likely sends them on a road trip to Grandville (6-3) as the No. 3 seed in their district according to last week’s projections.

Caledonia beat Hudsonville 26-19, essentially solidifying a district bracket with Rockford, Grandville, West and Grand Ledge, based on the team’s proximity to each other.

Catholic Central (7-2) is now in line to host at least a first-round game following Friday’s win — and Shamrocks’ coach Dan Anderson said he thinks so, too.

“They (TC West) had a great record. I believe we’re going to get some good points out of it,” Anderson said. “We’re just looking forward to who we’re going to play in the playoffs.”

Both teams will patiently await 5:30 p.m. on Sunday when the playoff brackets are set to be released across the state on Bally Sports Detroit.

Catholic Central got on the board first after a quick drive resulted in a 12-yard Connor Cohan catch from quarterback Declan Byle.

West’s Carson Douglass took a long screen pass down the sideline to the Shamrocks’ 15-yard line, putting the Titans in position to tie the game at 7-7. But a intentional grounding call on Brandon Konchek negated the play and set up 3rd-and-41. West punted.

“We allowed some things to snowball,” Vaughn said.

Catholic Central continued to wow the fans at Thirlby during the second quarter. Cohan evaded tackles from West’s Matthew Zoutendam at the Titans’ 15-yard line and ran into the end zone for a 28-yard TD. Cohan rolled onto Zoutendam’s lap and pivoted himself with his hand. Officials ruled that his shin never touched turf, and the Shamrocks took a 14-0 lead.

DCC’s Owen Semp — a Division 1 prospect — showed off his skills just before the end of the half, leaping to grab a ball on a fade route and take it 72 yards for a TD. That put the score at 21-0.

An early second-half red zone appearance on a Konchek 47-yard carry resulted in a turnover on downs. Byle was backed into the endzone and drew a safety for the Titans’ only points of the night. Spencer Lyons scored the final touchdown for DCC on a late-game 51-yard touchdown run in the fourth quarter following a muffed Titans punt.

Aiden Lewandowski led the Titans in tackles at 10. Catholic Central outnumbered TCW in offense 367-195 led by a 315-yard night from Byle on 19-of-36 passes.

“Did we stand toe-to-toe? I think we stood toe-to-toe. We still lost,” Vaughn said.

Vaughn said there’s been much chatter in the Titans’ locker room about ending a similar storyline — a 6-3 team losing in the first round of the playoffs. He says he’s still waiting to see if the Titans could hit the potential the coaching staff sees in them and will continue to push them.

“This is an incredible senior group that we got, and they want to do things that have never happened to Traverse City West,” he said. “They’re a group that can do it. They need to come out and realize they can do it.”