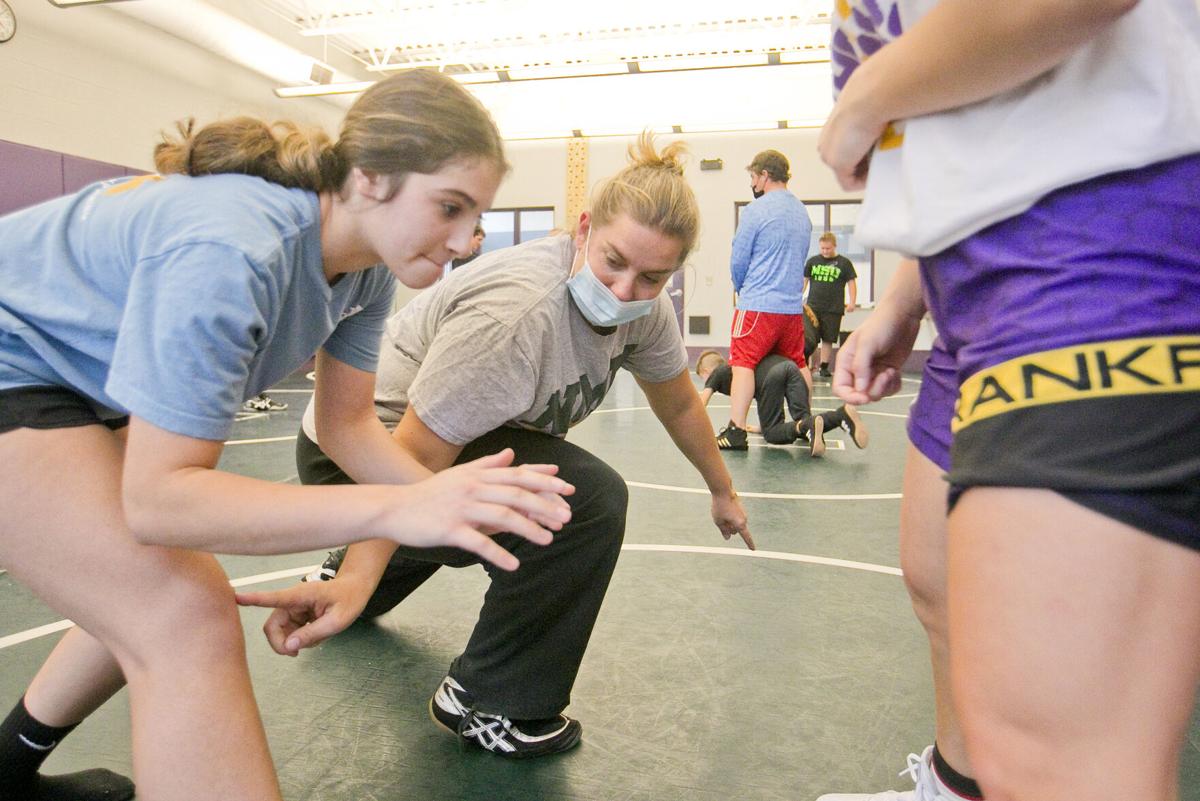 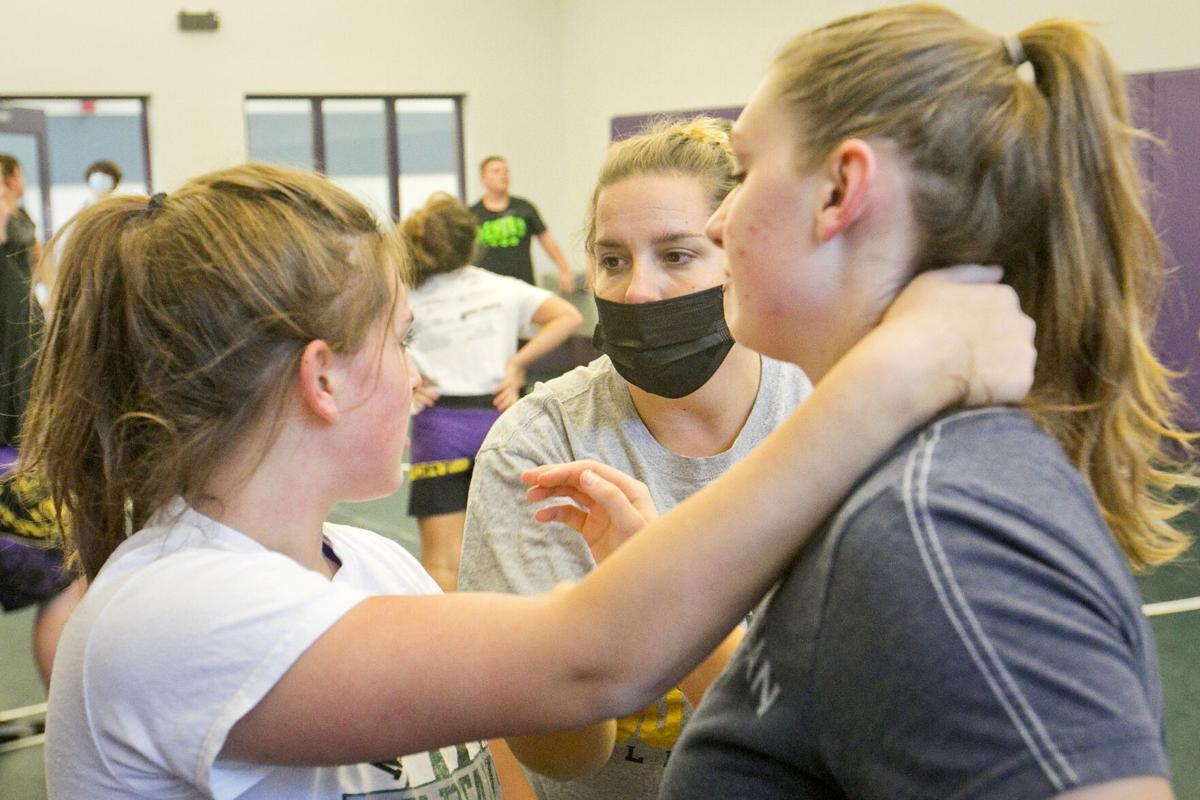 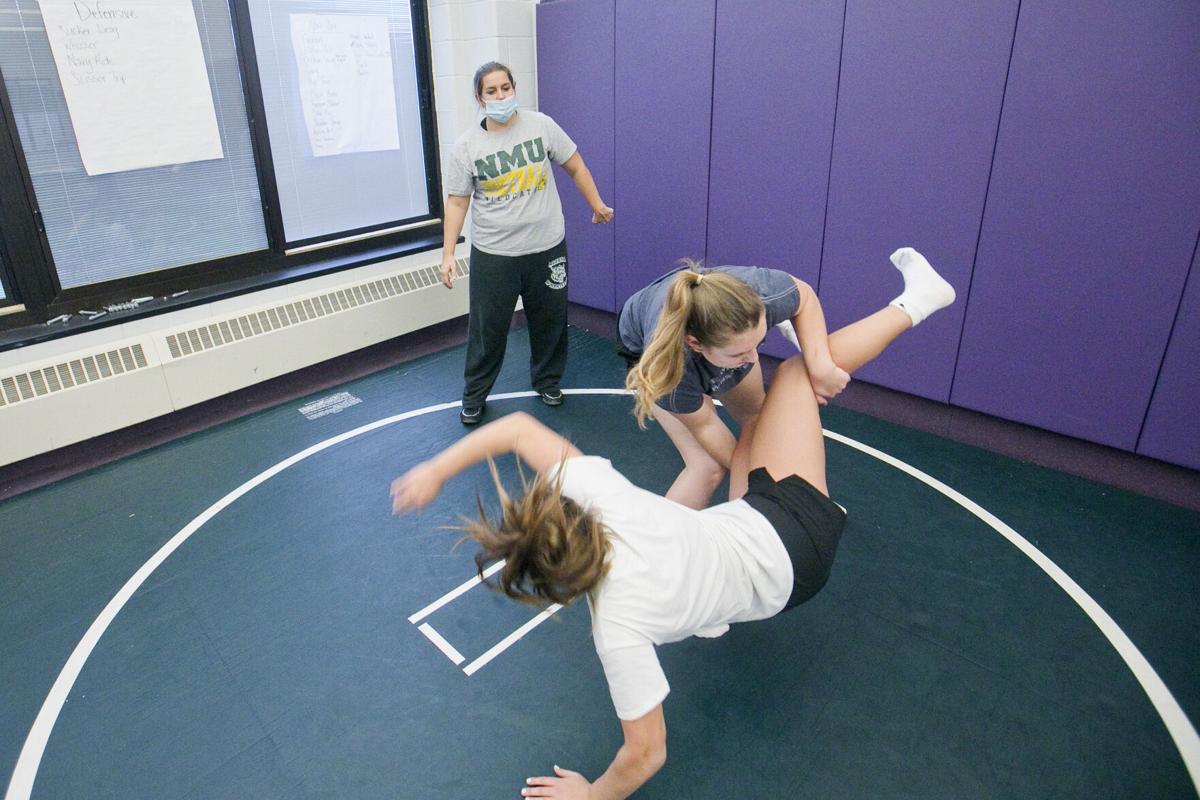 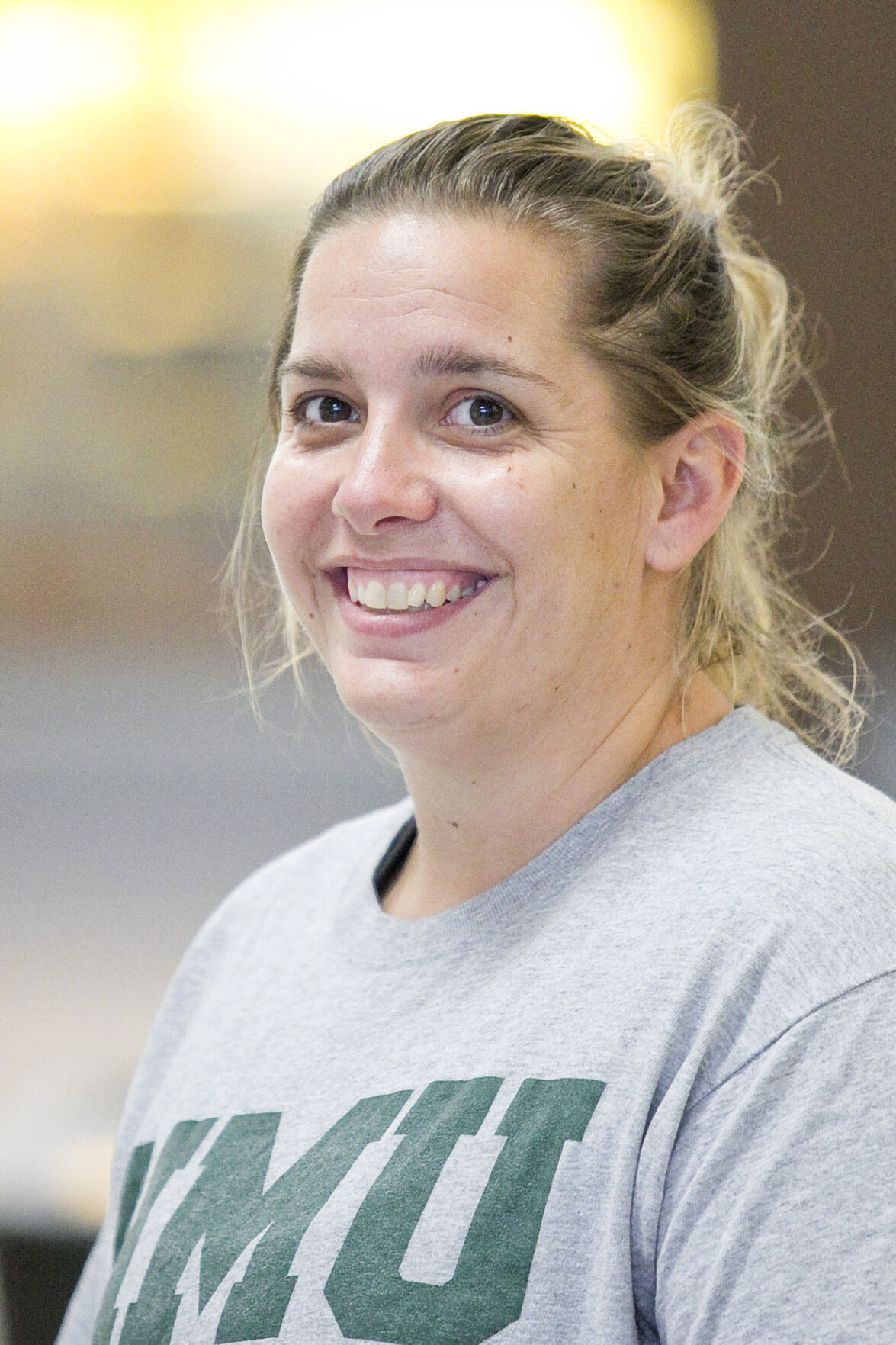 FRANKFORT — Jaime Smith made her rounds through the Frankfort wrestling room as her team learned the sport’s most basic — but important — moves on day one of practice.

The head coach walked over to the mat where Paige Willman and Abby Farkas were working on single-leg takedowns. They were confused until Smith twirled around and compared the move to spinning on a leg in ballet. At that point, smiles filled the air and the two manage to complete the move.

“Actually, I made my boys do ballet,” Smith said.

Smith, the only female head coach of a Michigan high school wrestling program, recalled a time years ago when the Panthers were struggling with their balance and getting their feet underneath them — the first two components of a single-leg takedown. The solution: inviting a literal ballet instructor to practice.

“We’re going to work on our grace,” she recalled saying then.

Next to Willman and Farkas were eighth-grader Bella Crompton and freshman Emanuela Alaimo.

Last year, it was just Crompton, who — as a seventh-grader — practiced in a room full of boys at least 30 pounds heavier than her. Most much more than that.

Wrestling boys isn’t new to her. She’s been doing it since second grade.

“It was more fun that way,” Crompton says. “It definitely made me work harder in the room.”

Alaimo came out for the team to be Crompton’s practice partner after Smith, her gym teacher, piqued her interest in the sport. Alaimo realized she’d likely be too short to play basketball, so she wanted to give wrestling a try if it meant being Crompton’s partner.

This year, the stakes are higher for wrestlers like the four young women at Frankfort’s first practice.

Female wrestlers this winter have a chance to do something they haven’t before in Michigan: compete for their own Michigan High School Athletic Association State championships. The same ones their male counterparts have been able to win since 1978.

Turnout numbers for female wrestlers have been way up across the northwest Lower Peninsula. Coaches have sold the sport on the ability to practice against other girls and compete for a chance to wrestle at Ford Field for the first time in the state’s history.

For the last five years, Smith led the charge in working to get the sport sanctioned by the MHSAA. That green light came this summer at an MHSAA Board of Directors meeting, where Michigan approved a fifth female-only division and gave those wrestlers a mat at the finals.

“For some of these girls, even just having a female practice partner is huge for them,” Smith said. “When we go to meets, they don’t have to be the only girl in the locker room by themselves. You can have a team within a team, which is going to be huge.”

Smith said girls have watched year after year as the one or two qualifying female wrestlers take to the mat at the state finals at Ford Field. They think, “I might be able to be that girl.”

But that girl would only get two or three matches — against boys. Not the case anymore.

“Every girl in the stands at Ford Field is going to be able to say: ‘Hey. I can be that girl.’ … Not maybe,” Smith said.

Krauss will be a hometown favorite at Boyne City’s all-female wrestling tournament Jan. 16.

“I’ve said it multiple times in the past, but this year I really think I can do it,” Krauss said of her state championship hopes.

Some downstate teams — like Holland West Ottawa and Clinton — have had high enough turnout in girls wrestlers to fill out an entire lineup.

Whittemore-Prescott coach Russ Wilson, who leads an Iosco County school with an enrollment of 220, said he had 12 female wrestlers attend each practice on the first week. That’s nearly even with the 14 boys at practice.

Wilson is going to enter his girls in tournaments at every corner of the state in hopes of getting high seeds at sectionals. He sent three girls to last year’s Michigan Wrestling Association girls finals.

“My main focus is building this program up for girls to get started,” Wilson said. “They don’t want to wrestle boys. They don’t have to, they have their own stuff now.”

The MWA has held state finals for female wrestlers each of the last three years. There was an increase from year one to two with about 250 girls participating each year. Numbers slightly declined in 2020 in the midst of the COVID-19 pandemic with 210 competing from 123 schools.

The past two years were successful ones for Traverse City-area wrestlers. Andrea Frary of Traverse City West won her weight class at the 2019 finals. Krauss took third last winter after falling in the semifinals to the eventual champion. Grayling, Mancelona, Manton and Cadillac all had wrestlers place at the 2020 finals.

Alpha weight certifications are due at the beginning of the calendar year. At that time, turnout numbers will be more clear, but Smith says what’s happening in northern Michigan will be seen statewide.

The postseason format will feature a sectional format on the week of boys regionals. The top-eight move on to the finals. Girls can still choose to wrestle in the boys tournament, if they wish.

Sectionals differ from typical districts and regionals because they’re not based on geography or school size. The format also means girls from a school like Frankfort would be competing against Traverse City West.

Michigan isn’t the only state doing their postseason like that, allowing for smaller schools like Frankfort to fill out lighter weight classes in regular-season conference meets and dual team finals.

“This is what we want to do,” Smith said. “If we said this was a team sport, now I don’t have enough girls for a team.”

Within eight years, Smith said the hope is to have dedicated girls programs and dual meets across the state.

And Krauss wants to help that happen.

After studying business and coaching at Northern Michigan University, Krauss said she plans to open up a facility in the Gaylord area dedicated to training young wrestlers — male and female.

“I’m really happy that girls are starting to realize that wrestling can bring more opportunity than some of the other sports,” Krauss said. “It just started getting big.”

BOYNE CITY — Sixty-seven wrestlers made a bit of history Sunday.