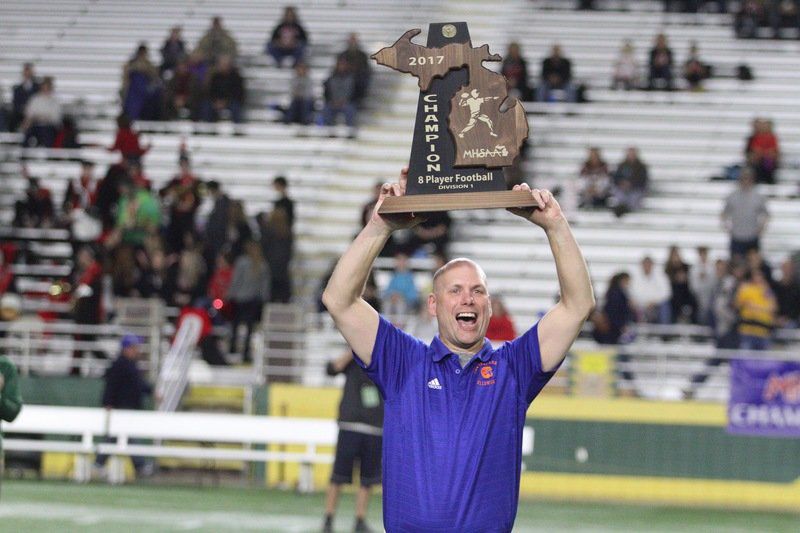 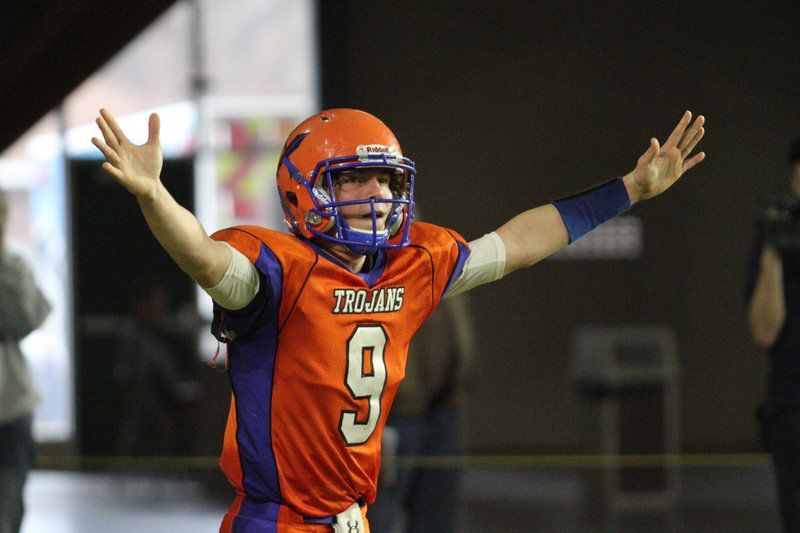 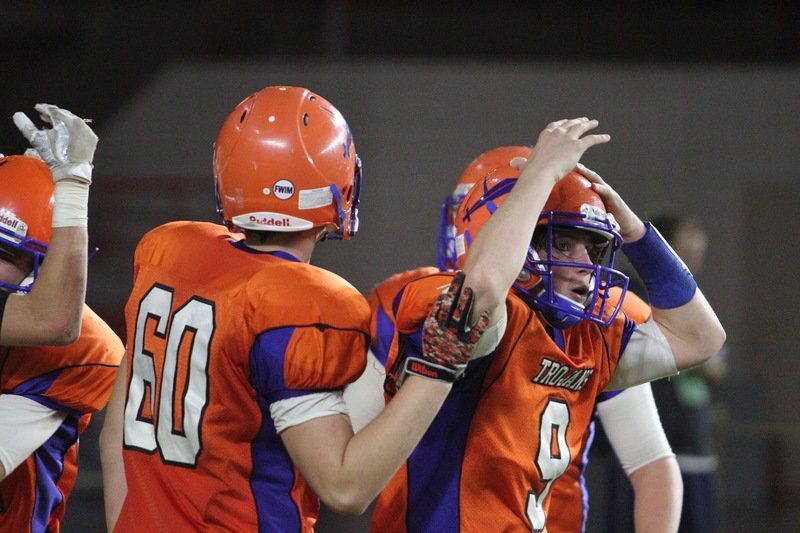 Record-Eagle/Brendan QuealyCentral Lake's Gavin Mortensen (right) in disbelief next to Trevor Cain (60) after winning the Division 1 8-man state championship at the Superior Dome in Marquette on Saturday. The Trojans defeated Deckerville 32-30. 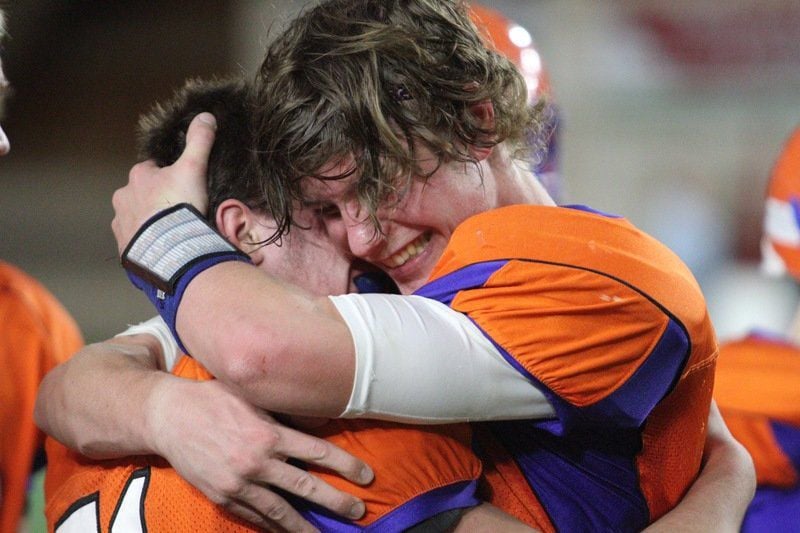 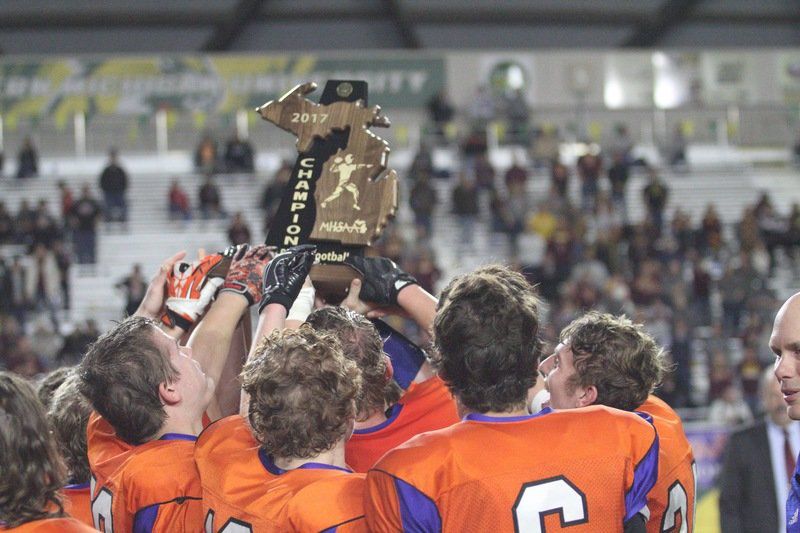 Record-Eagle/Brendan QuealyCentral Lake's Gavin Mortensen (right) in disbelief next to Trevor Cain (60) after winning the Division 1 8-man state championship at the Superior Dome in Marquette on Saturday. The Trojans defeated Deckerville 32-30.

MARQUETTE — Gavin Mortensen found the corner, followed his blockers and ran into the end zone unscathed.

The Central Lake senior quarterback was mobbed by his teammates under the bright lights of Northern Michigan University's Superior Dome after scoring what turned out to be the game-winning touchdown against Deckerville in Saturday's Division 1 8-man state championship battle.

And it was just that — an all-out battle between two teams vying for glory. But it would be the Trojans basking in the glow of a state title after mounting a comeback in the second half to win 32-30.

"It feels amazing. It feels absolutely amazing," Mortensen said. "I'm at a loss for words right now. It hasn't sunk it yet. It's wild."

The two-point margin was the closest the undefeated 13-0 Trojans had played to all season. Central Lake had dominated its opponents leading up to Saturday's championship bout, averaging 53.3 points per game and allowing just 22.3. That incredible run comes in Central Lake's first year in 8-man and a season after going 2-7.

"Just one more for the season, one more for the story," Heeke said. "As we've gone through the season, people didn't think we had it in us, they didn't believe in us. We knew what was in that group, what was in that locker room. Those kids just battled through so much this year. What an awesome, awesome day for them and for the community. It's been a blast, and they're excited to celebrate this for the rest of their lives."

Central Lake came out strong against Deckerville (11-2) and threw the first punch of the game when Skyler Spangler took a pitch to the left from Mortensen and scooted in from 5 yards out and then caught the ensuing two-point conversion attempt to make it 8-0. The Eagles marched right back and went on a 4:58 drive that ended in a Zach Ostrowski 12-yard TD catch to knot it at 8-8.

Heeke gambled on the Trojans' next possession. Facing a fourth down and nine from the Deckerville 49, Heeke called for a long pass over the top that Jayce Hoogerhyde hauled in at the 15 and then fought off two defenders to hit pay dirt. This time, however, the two-point attempt was no good, allowing Deckerville to go up 16-14 after scoring on its next possession with a successful two-point conversion.

The Eagles took a gamble of their own with less than a minute left to play in the half. Quarterback Isaac Keinath connected with Kenton Bowerman for a 31-yard touchdown strike on fourth and six to lead 24-14 at the break.

"That win was how this team is," Central Lake junior Grant Papineau said. "We have a lot of heart. We have a lot of go-get-it. We got down by (10) at halftime, but we went in the locker room, looked at each other and said, 'You know what, let's do it. Let's go get 'em.' That win is a reflection of what this team is all about."

The Trojans also went into the locker room with starting center Dalin Clark sidelined after suffering an injury to his right knee late in the second quarter. The 6-0, 265-pounder was replaced by Vance Hoeksema, a 5-6, 140-pound sophomore who had taken just four snaps all season. Hoeksema fumbled the snap on his first play, but he came out in the second half with fire in his belly and worked nearly flawlessly with the offensive line to open up the rushing attack.

Central Lake began the third quarter with a 3:44 drive that was punctuated by a Papineau 1-yard scoring run to pull the Trojans within four at 24-20. Deckerville responded with a long drive of its own and a 20-yard touchdown catch from Wyatt Janowiak to push the lead back to 10 at 30-20.

The Trojans were not to be denied. Spangler's 2-yard TD run with 11 seconds left in the third made it 30-26 going into the final frame.

After finally getting a defensive stop, Central Lake got the ball back at its own 11-yard line with a state championship just 89 yards away. The Trojans got 51 of those yards when Mortensen hit Papineau in the flat and the 6-3 running back brought the ball down to the Deckerville 28. With 2:49 left to play, Mortensen went on to score the game-winner, but Central Lake still needed to stop the Eagles' potent offense to clinch the win.

A strip sack and fumble recovery by Central Lake's Dylan Michael at the Eagles' 20 looked like it would lock up the title, but Deckerville forced the Trojans into a turnover on downs with 1:32 left. Bowerman picked up 47 yards on a screen pass, but Deckerville only got as close as the 21. On a fourth and nine with less than 40 seconds to go, Keinath lobbed a pass to Janowiak in the end zone, but Hoogerhyde slapped it away, sending the Trojans into a celebratory disbelief.

"We were all just shocked. 'No way. We really just did this?' We were in shock. We didn't really know," Mortensen said. "Just growing up and watching the finals on TV, you're like, 'Oh, I'm never going to be there,' but it's still cool to watch. You dream about it, and then all of a sudden you're a state champ. It's crazy."

Central Lake players shed tears of joy and embraced at midfield before Heeke hoisted the state championship trophy over his head and then turned the sacred hardware over to his players.

With the trophy in his hands, Mortensen led the charge into the locker room through a throng of Central Lake fans.

"They've meant an absurd amount," Mortensen said. "It's amazing. Looking out and seeing all of those people cheering and knowing that regardless, they're going to love you. It always feels better to have fans supporting you when you're winning."

Central Lake will now take that trophy and put it on display for all to see.

"It's going to be there forever. This team left their legacy by putting a trophy in that case," Papineau said. "I don't know if I've still processed it all the way or not. We actually won. We're state champs. It's awesome. I just can't believe it."

I am notorious for sleeping through my alarm. Well, alarms is definitely more accurate.