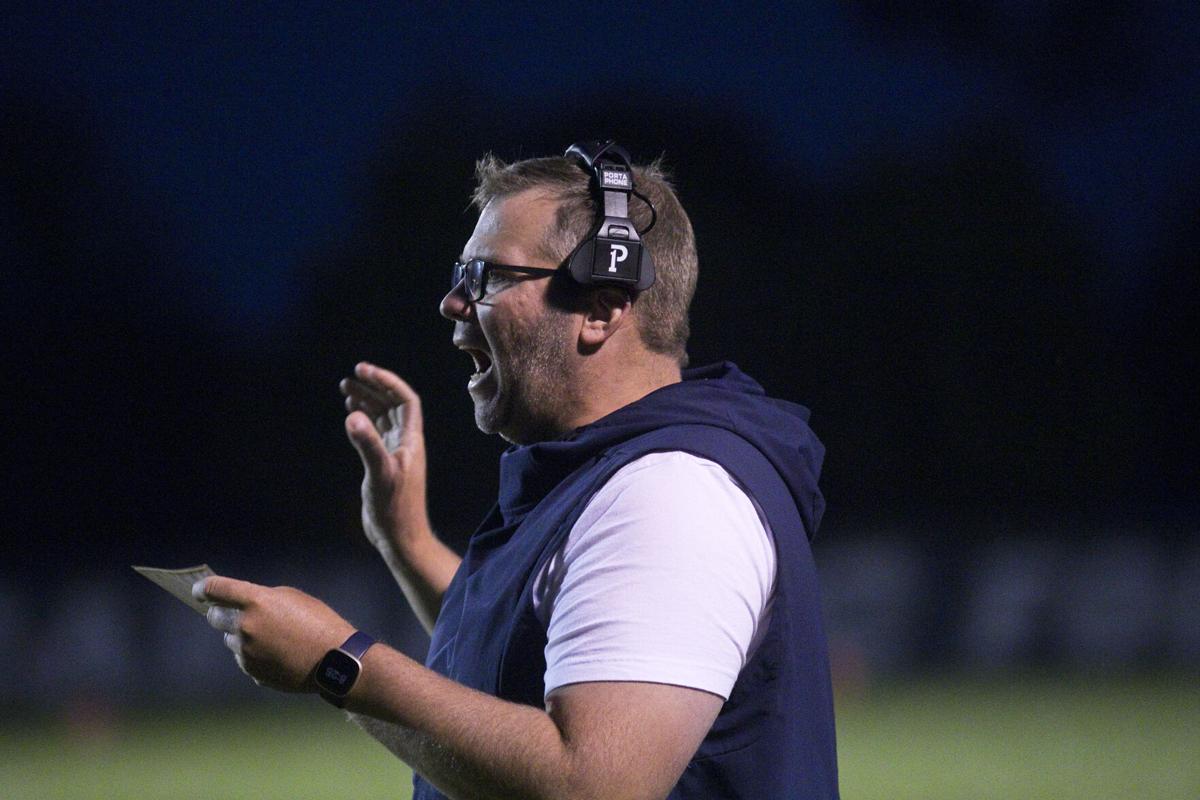 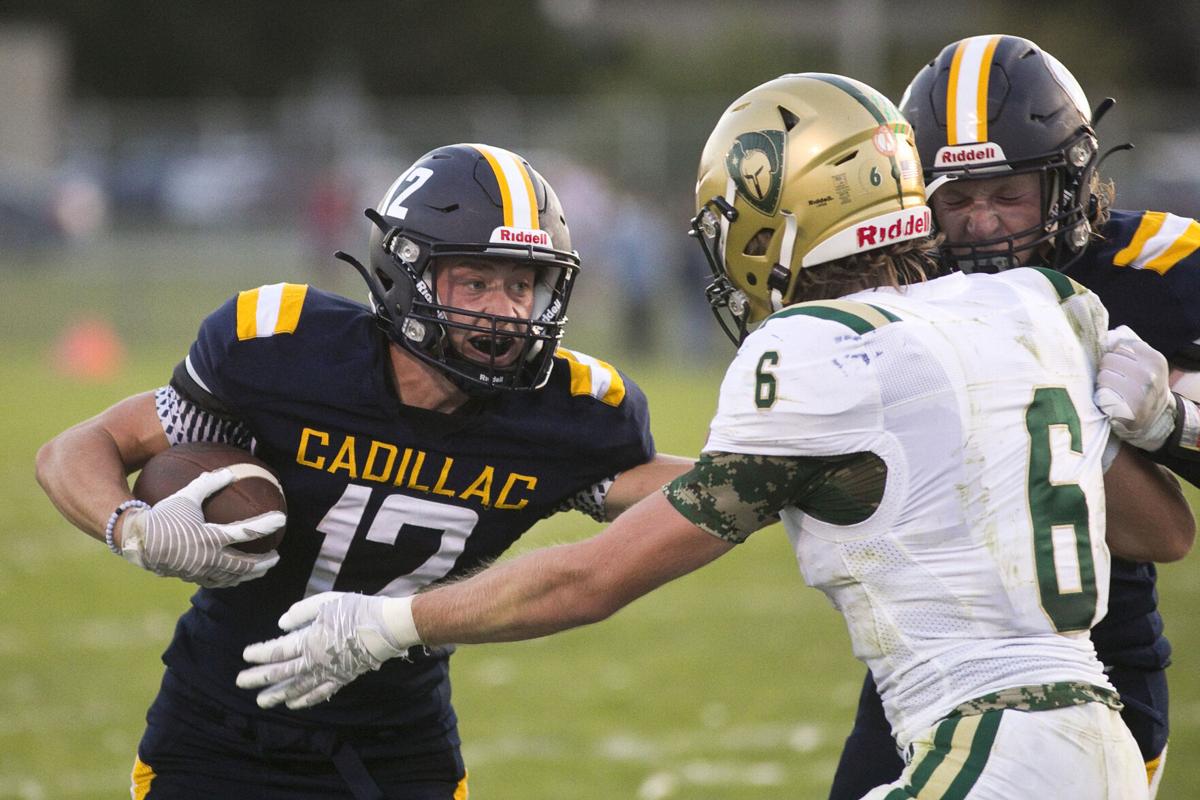 Cadillac’s Carter Harsh (12) gets a block from a teammate on Traverse City West’s Matthew Zoutendam (6) in the second quarter of the Vikings' Sept. 10, 2021, game at Veterans Memorial Stadium.

Cadillac’s Carter Harsh (12) gets a block from a teammate on Traverse City West’s Matthew Zoutendam (6) in the second quarter of the Vikings' Sept. 10, 2021, game at Veterans Memorial Stadium.

The Cadillac football head coach saw the numbers on his varsity squad dwindling. He had few choices, but one of them was to ask all of his sophomore players to forego their JV season and take their lumps on varsity.

"Nobody batted an eye," Mallory said. "Nobody complained."

That buy-in from his players resulted in the first of three straight Division 4 district championships and, as Mallory said, "laid the groundwork for years to come."

"They had to have faith that we weren't going to just put them by the wayside. They did a good job following that leadership ahead of them," Mallory said.

The 2020 season, despite all of the ups and downs that were out of the Vikings' control, included another district title, a regional championship and a trip to Ford Field in Detroit to play for a state crown. The Vikings fell short, losing to Detroit Country Day 13-0, but the hunger remains.

The seventh-ranked Vikings (9-2) travel to Jenison High School on Friday to battle it out against No. 3 Hudsonville Unity Christian (11-0) for a second straight regional win and a date with either No. 2 Edwardsburg or unranked Grand Rapids South Christian in the state semifinals.

Ben Meyer, a senior offensive lineman for Cadillac, sees the 2021 season as the culmination of his and his fellow seniors' hard work and dedication over the last three seasons. Meyer said his sophomore campaign was a learning experience that only helped develop them as a team and bring the players closer together.

"We had a special bond going," Meyer said. "We knew that — because we were younger — we had the opportunity to do something special. We all had to grow up a little bit and a little faster than some of us wanted, but it helped us become the football players were are today."

But Mallory said Cadillac's success won't stop with this group of seniors. Because of the sophomores' sacrifice in 2019, the Cadillac freshmen stayed at their level and had a chance to develop without getting a "bad taste of football" from "getting their teeth kicked in" on the JV team, Mallor said.

"That really set the program on track for the future," Mallory said.

For now, Cadillac's future is Friday and Hudsonville Unity Christian.

"Nobody outside of our locker room is giving us a chance," Mallory said. "That's a position we've been in before and have had success in before. It's just a matter of buying into what we're trying to do."

When asked why no one seems to believe Cadillac can win Friday, Mallory's answer was simple and straightforward.

"Oh, because of the scores," he said. "Their margin of victory is pretty high, but I think we're pretty well suited to deal with them."

The Crusaders dropped 79 points in their district championship win against Grand Rapids Christian last week and are averaging nearly 60 points a game this season.

The high-octane offense will be a challenge, but Cadillac faced a similar team in the state semis last season. Edwardsburg scored 40 or more points in every one of its games last year — just like Hudsonville this year — but the Vikings walked off the field with a 28-26 victory over the Eddies.

"If we can keep them off the field and keep them out of rhythm, that's going to pay huge dividends," Mallory said. "Our guys have been in this spot before. Now it's just a matter of going out and getting it done."

Clean, turnover-free football will be key for Cadillac.

"These are the kind of games you prepare for," Mallory said. "Everything is on the line."

What people are saying about his team's chances doesn't concern Meyer.

"That's just talk off the field, but I've always liked being the underdog," he said. "It lets us play with a chip on our shoulder. That's how Cadillac football has been, and that's how we do our best."

Cadillac football is all about brotherhood, Meyer said.

"We can come together and be more than just a football team," he said. "Having trust and love for the one next to you, it's a big help when it comes to making a block for someone to go through and being willing to take a shot for your teammate to get his name called."

SERIES: The Vikings and Crusaders have never played before.

BACKGROUND: Cadillac, which is coming off a 24-14 victory over Whitehall to win the program's third straight district title, brings in a crew with years of varsity experience that includes a run to the state championship game last season. The Vikings' spread the wealth on offense and have a solid team rushing attack that keeps control of the ball. The Vikings' defense will have its hands full, however. Hudsonville Unity Christian brings one of the highest-powered offenses in the state against Cadillac. The Crusaders put up 79 points in their district championship win against Grand Rapids Christian and have not scored less than 40 points in any game this season, averaging 58.2 per contest.

BRACKET BITS: The winner plays either Edwardsburg (11-0, No. 2) or Grand Rapids South Christian (8-3, unranked) in the state semifinals.