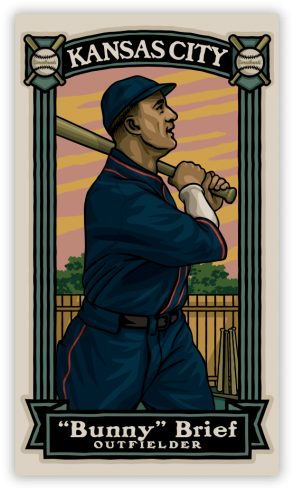 Gary Cieradkowski drew a photo illustration of what a baseball card for Bunny Brief would have looked like. 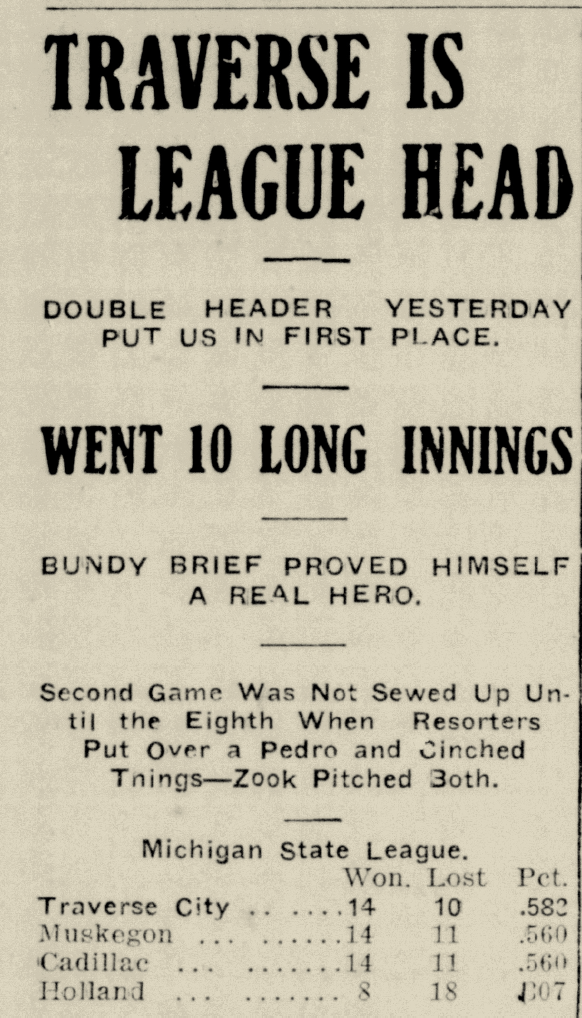 A newspaper clipping in a June 25, 1910 Record-Eagle of a Traverse City Resorters game. 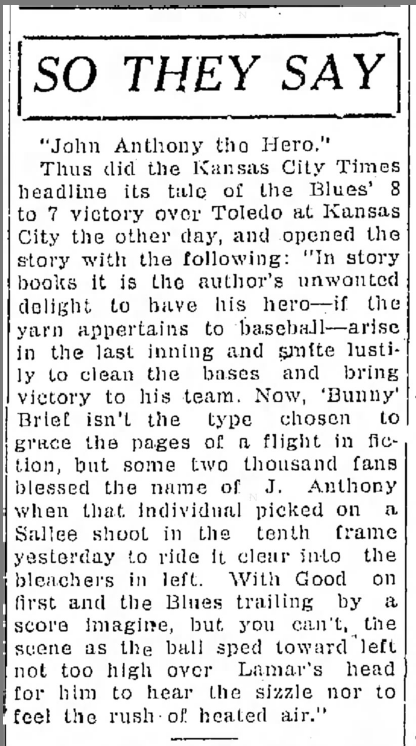 An archived clipping of the sports section of the Record-Eagle on May 8, 1922 featuring a game Bunny Brief stood out while a member of the Kansas City Blues.

Ethel Lawrence and Kathleen Sipples, children at the time, co-authored a poem published in the August 30, 1910 edition of the Record-Eagle on "Bundy" Brief’s style of play.

Gary Cieradkowski drew a photo illustration of what a baseball card for Bunny Brief would have looked like.

A newspaper clipping in a June 25, 1910 Record-Eagle of a Traverse City Resorters game.

An archived clipping of the sports section of the Record-Eagle on May 8, 1922 featuring a game Bunny Brief stood out while a member of the Kansas City Blues.

Ethel Lawrence and Kathleen Sipples, children at the time, co-authored a poem published in the August 30, 1910 edition of the Record-Eagle on "Bundy" Brief’s style of play.

TRAVERSE CITY – It’s easy to look past a tombstone at Oakwood Cemetery as if it was no different from the rest.

There lies a man better known as “Bunny.”

Nobody really has an answer on how the nickname evolved from “Bunty” to “Bunny,” but the 19-year record-setting baseball career for Anthony John Grzeszkowski — Traverse City Central graduate and the first star of the 1910 Traverse City Resorters — is undisputed.

On Wednesday the Resorters return to Traverse City under a new logo and colorway to compete in the northern Michigan pod of the Northwoods League.

Inspiration for the name of this season’s Great Lakes Resorters drew from the Resorters that Bunny was a part of. From 1910 to 1914, they were a team of young ball players from Michigan eying time in the major leagues. The purpose of today’s Northwoods league isn’t much different.

La Rue Kirby, Fred Markley, Hollie Dull, Homer Elder, Earl Zook and a man that simply goes by “Friend.” Those were your Traverse City Resorters. It’s no surprise none other than Bunny Brief led the way.

Legend has it that Grzeszkowski tried to pronounce his name to his manager and was told to “make it something brief.”

As for “Bunny,” Ethel Lawrence and Kathleen Sipples co-authored a poem published in a 1910 Record-Eagle on Brief’s style of play. By then, Anthony had picked up the nickname “Bundy,” an American pronunciation of the Polish word for rebellious, ‘bunty.’

An excerpt of the poem reads: “All of the kids in town would have to do as Bundy said. If they were playing ball, Bundy would have to march ahead, for Bundy would never play unless he could have his way. So everyone called him Captain Bundy Brief.”

“The guy was able to hit home runs on any type of level that they put him in,” says Gary Cieradkowski, a baseball historian and author of “The League of Outsider Baseball.”

Cieradkowski wrote a 12,000-word blog post in 2018 on Brief’s life inspired by the fact that both were polish. Most of the research for this story came from archived Record-Eagle stories Cieradkowski found as well as Baseball-Reference statistics.

Bunny had quite an athletic career before the Resorters.

Bunny moved from Remus to attend Traverse City Central High School and joined the Traverse City Hustlers, a semi-pro team that rostered both young ballplayers and adults. Record-Eagle stories in 1909 said he had a team from Elk City “pounding holes in the atmosphere.” Bunny joined the Resorters as a first baseman and left fielder.

He finished with the most home runs on the team in the Resorters inaugural season.

For his time, that was considered a lot.

“Hitting a home run was something that was so far out of the question for most players,” Cieradkowski said. “The easiest way to get on base was to just kind of tap the ball or bump the ball. It was basically just hitting singles and running as fast as you can.”

The team finished a half game behind a team in Cadillac with Bunny the only player on the team to hit more than one home run.

The Resorters were not as successful in their second year of baseball — finishing 62-56 and 11.5 games out of first – but Bunny was. He led the Michigan State League the summer of 1911 with 169 hits and 10 home runs on a .500 slugging percentage.

Bunny had a short stint with the St. Louis Browns to make his major league debut at 18-years old, then he returned to the Resorters after playing 15 games for a third season.

He took his first home run title that year with a 13 dinger season, averaging more than one hit per game and a .566 slugging percentage. If he played in the 2019 MLB season, he’d trade places with Jose Altuve with the 15th highest slugging clip in baseball.

The Browns recalled Bunny for the 1913 season, and he spent quite a while with them before being assigned to the American Association.

In front of 1,000 fans, his 45th game in the majors, Bunny Brief hit his first major league home run off Ray Collins of the Boston Red Sox at Sportsman Park.

St. Louis would only hit 18 all year.

Bunny at the bat

Bunny’s baseball career starts at the turn of the century, the ‘deadball’ era of baseball, and concludes just before Babe Ruth becomes a American phenom for hitting home runs.

He hit 342 home runs in 19 seasons of baseball across eight different leagues, sharing the record for the most minor league home-run crowns at eight.

The other player to do that is Ken Guettler, once called “the minor’s Babe Ruth.”

“It’s not like he’s this old archaic figure that played the game without a glove or something like that,” Cieradkowski said. “He played the game in that formative period, but he also played it in the modern times. I’m pretty sure his home run titles were divided equally between both eras, and that’s pretty neat.”

There were only 16 major league teams until the MLB expanded in 1961. To get to that level you had to play through at least one of the top three minor leagues at the time, the equivalent of triple-A baseball today.

Bunny played in two of them and still holds the home run record of one at 256.

“There were a lot of guys whose careers ended after they changed the baseball because they just couldn’t adapt to that style of play,” Cieradkowski said. “He was the person that could, that was his job and he loved the game.”

TRAVERSE CITY — For the first time this season the Traverse City Pit Spitters hit the road.

CHEESED OFF: Spitters fall to Mac Daddies for title