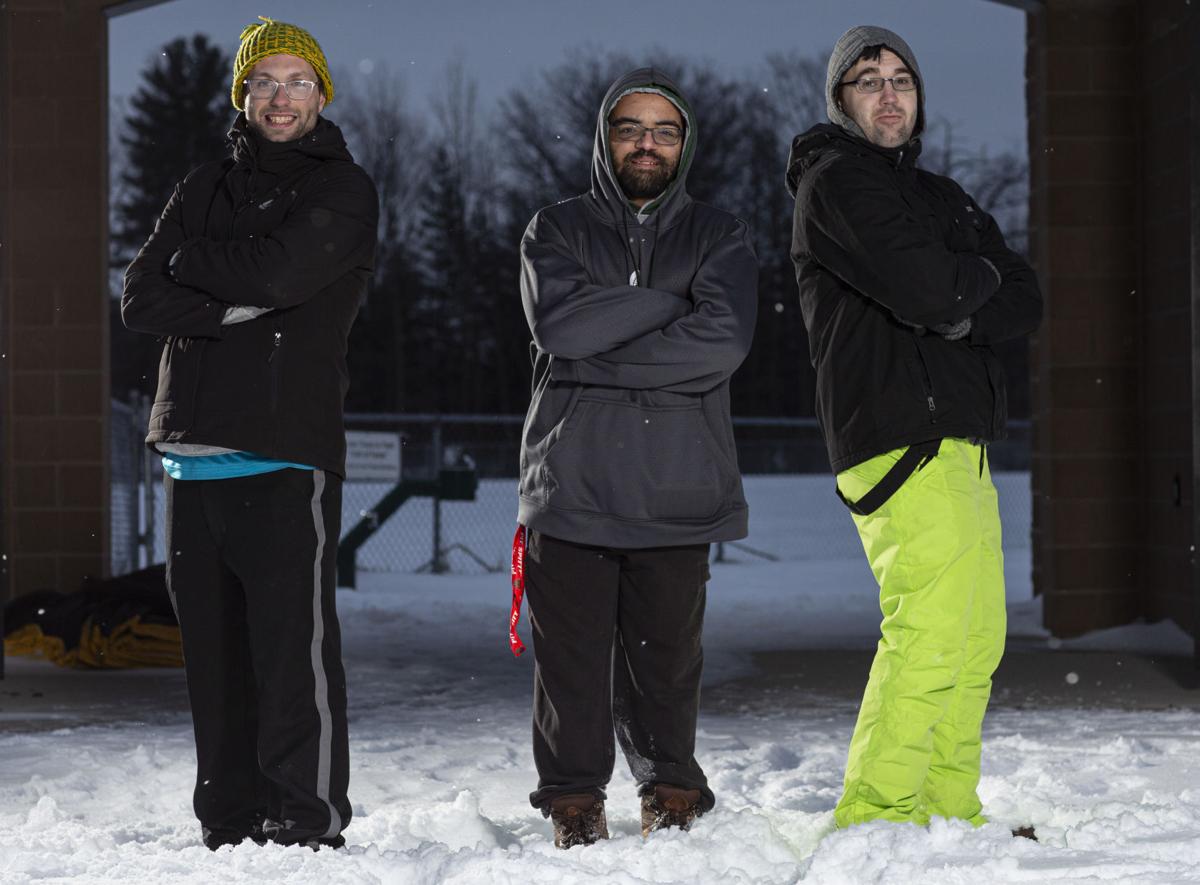 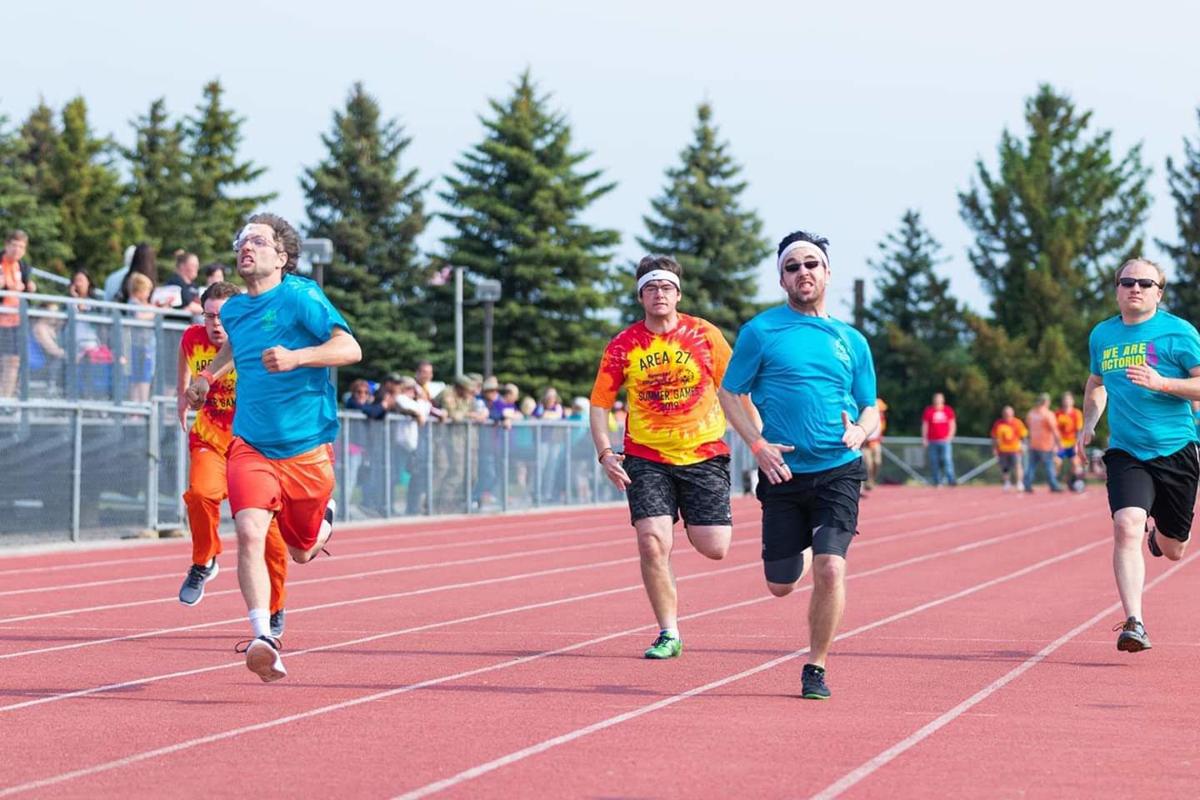 Eric Lemmon, left, in blue shirt, and Kelly Everson, second from right, race against each-other during a race in the SOMI summer games. 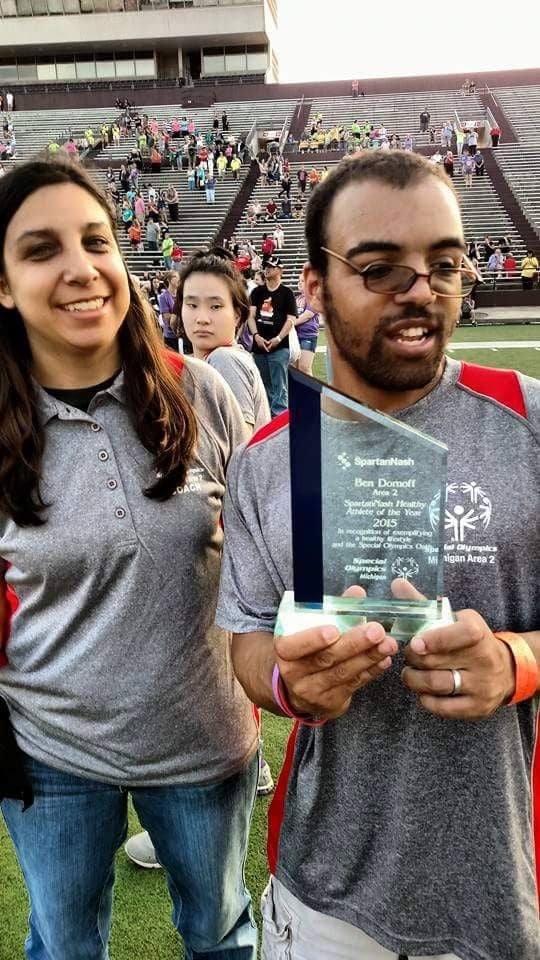 Ben Dornoff accepts the SpartanNash Healthy Athlete of the Year award at Central Michigan University in 2015. 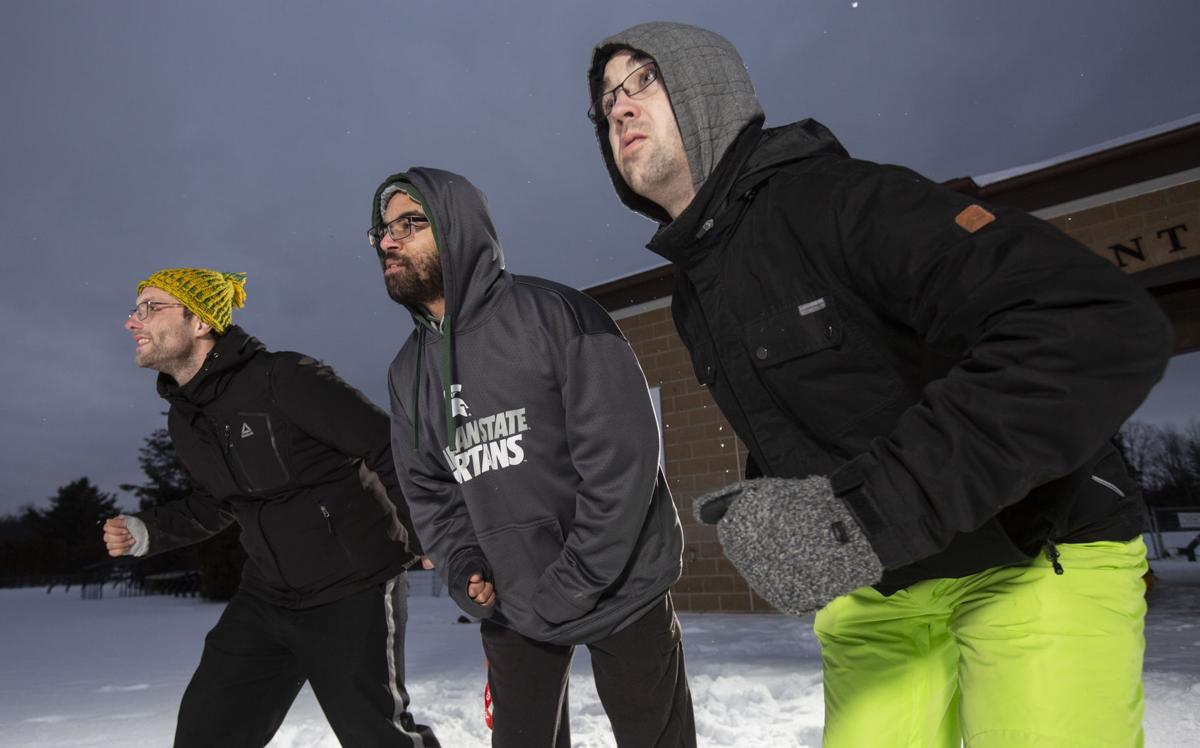 Eric Lemmon, left, in blue shirt, and Kelly Everson, second from right, race against each-other during a race in the SOMI summer games.

Ben Dornoff accepts the SpartanNash Healthy Athlete of the Year award at Central Michigan University in 2015.

TRAVERSE CITY — Kelly Everson, Ben Dornoff and Eric Lemmon of Traverse City are three friends who like to run. Everson and Dornoff have ran since high school, and Lemmon picked up the hobby within the last four years.

The three train for this summer’s Bayshore marathon together. And for the most part, their training schedule is no different than most for the same race. If you saw the three running at the Grand Traverse County Civic Center, they’d probably speed right past.

But a deeper conversation reveals quickly how their path has been anything but normal.

Their motivations reveal a past interlaced with numerous tragedies and setbacks that few ever experience.

Everson, Dornoff and Lemmon are each disabled. Their disabilities range from Cognitive Impairment, ADHD, ADD, Emotional Impairment, Bipolar, Extreme High Depression, Anxiety, Cerebral Palsy or a combination of any of the aforementioned. Dornoff says he was abused as a child and “thankfully” was adopted when he was 5. Lemmon was bullied in high school and has been battling testicular cancer for the last four years. He says around 30 percent of it is still with him.

An estimated 61 million adults in the United States live with a disability, 11 million adults battling a serious mental illness and 20 percent of students nationwide reported they were bullied in high school.

So, let’s try that again, this time with a more appropriate introduction.

Cue the song “Flame” by Lane Hardy, follow it up with “Champion” by Clark Beckham. The “Brothers of Destruction” have entered the Bayshore Marathon, and Lemmon and Everson have their sights set on another 26.2 miles at the Detroit marathon, five months later.

When they finish, they hope to send a message to those in their shoes who were unable to walk up to the finish line, but not in the way you might be thinking. The three are using long-distance running as a weapon to combat their mental illnesses. They hope to show the world the stereotypical day-to-day suffering society assumes they deal with is not reality.

The three have been told “no,” “you’re not good enough,” and “are you sure?” for the better part of their lives.

You don’t say no to the Brothers of Destruction.

Kelly Everson, 30, graduated from Forest Area High School in 2006 and was a member of the Warrior’s varsity wrestling team. He tried virtually any sport offered to him through Special Olympics of Michigan. He was on one of the last cross country teams the school had before cutting the program (it has since been reinstated) and also ran track and field.

Forest Area helped him enroll in a job training program offered through the Traverse Bay Area Intermediate School District following high school graduation, but he wanted to find a way to stay involved in sports. Everson continued to stay active in SOMI, and he’s been running competitively for the last 12 years.

“I would be lost without it,” Everson said.

Aside from his mental health and disabilities, Everson dealt with intermittent back problems which occasionally kept him sidelined from high school athletic events. Oftentimes he’d be misunderstood — and bullied — for people thinking he just didn’t want to do it. To this day, he’s training with scoliosis and arthritis in his spine.

Everson’s trainer, Todd Antrim of the Traverse City Track Club, formed a pact with him. If he can pull it together and show him that he can run the whole marathon, he’d cover the cost of his entry. Everson agreed, trained, raced and made it to the finish line — five years straight.

For the sixth year, Everson took Antrim’s words of wisdom and turned it into something more. Months after planting the seed to form a marathon group, Everson approached Dornoff and Lemmon mid-August, offering them the same deal.

The caveat? Everson would train the two.

“I wouldn’t want anyone else to train me,” Dornoff said.

Today they try to get out and train as a group when they’re all free from work, but most are done individually. By using apps like MapMyRun, the group will send Everson their distances through a screenshot. The farthest they’ve gone is an 18-mile run, trying not to overdo the runners before the race.

“I couldn’t have thought that I would have trained anybody else, to be honest with you,” Everson said. “Basically my whole entire life, everybody says, ‘Oh you’re a sports quitter’ and all this stuff in high school … I looked down and I said, ‘At least I did it.’”

He paused. Then his speech indirectly speaks to those who put him down in high school.

“When I complete this”

The first thing Ben Dornoff’s foster mom got him involved in was running.

He’s been hooked since, doing every sport SOMI has to offer.

“She was like, ‘I’m going to get you into something so you’re not just sitting around the house doing nothing,’” Dornoff said.

Other than running, Dornoff says he’s “all over the floor” in shootaround. Dornoff even serves as an equipment manager for the Traverse City West football team.

As he grew older, he decided to be a Special Olympics sprinter. He competes in the long jump, 100-meter dash and 200-meter dash. The first time he competed in a special olympics event, it felt good because it was something that he could personally himself and really see what he can do with it.

“I’ve fallen in love with it,” Dornoff said.

In 2015, Dornoff was named the SpartanNash Healthy Athlete of the Year, an award that recognizes athletes who eat and drink healthy and run. That year he was an ambassador for SOMI and became the first athlete from Area 2 (which encompasses northern Michigan) to ever win a statewide award.

Since winning the honor, Dornoff never stopped working out. If anything, he works out more.

“He’s kind, he’s got a heart of gold, he’s really fearless,” said Samantha Knudsen, Dornoff’s personal trainer at Anytime Fitness. “He definitely gets down on himself and nervous, but in the end he will overcome everything and pull through and finish.”

After connecting with Knudsen over Facebook, Dornoff set up a training program to work out with her regularly, specifically geared toward training for the Bayshore Marathon.

“If I’m just gonna say yes to this, I’m not just gonna say yes and then not show Kelly improvement,” Dornoff said. “I’m gonna show them that I’m in this for serious. If I complete this it will be the best accomplishment I’ve ever done.”

Better than his Healthy Athlete of the Year award?

“I feel like that’s what this is all about”

Everson and Lemmon spent the last seven years working together at Grand Traverse Industries. Lemmon knew the job so well, unintentionally, he trained Everson on his first day. Since, the two have talked just about every day.

But the coincidental friendship could just be destiny.

Ashley Everson’s (Kelly’s wife) grandma and Lemmon are related. The two found out through their church that they are step cousins.

Lemmon says he was taken away from his parents at a young age. Until 2014, Lemmon wasn’t even involved in sports. After hearing about Everson’s experience with SOMI, Lemmon messaged him on Facebook on a whim.

“I asked myself,” Lemmon began, “do I want to push myself to the limit growing through myself, or keep putting myself down?’”

Not much later the two began going on runs. In 2018, he got into cross-country skiing. His first practice, his body already told him something was wrong.

Lemmon collapsed mid-race and was unresponsive for about two minutes.

“I’m going to get checked in,” Lemmon said to himself as he exited the race.

The next day he’s in the emergency room with doctors explaining to him he’s been diagnosed with cancer. He’d spend four months in chemotherapy and eventually had surgery at the University of Michigan Hospital.

“I’m not giving up,” he said to himself again.

“I’m going to make sure to you, you can’t die,” Everson said to reassure Lemmon. “You’re not gonna die, you’re meant to be on this earth for a reason.”

Lemmon decided for himself that running is that reason.

He’s constantly asked by doctors if he really wants to be running two marathons, and Lemmon passively ignores them. He’s not dying. He’s going to stay strong, and frankly, he doesn’t care what anyone says to him.

“There’s a lot of people with cancer that can’t do that,” Everson said, resisting himself from crying.

He paused again, then finished his thought.

“I feel like that’s what this is all about.”