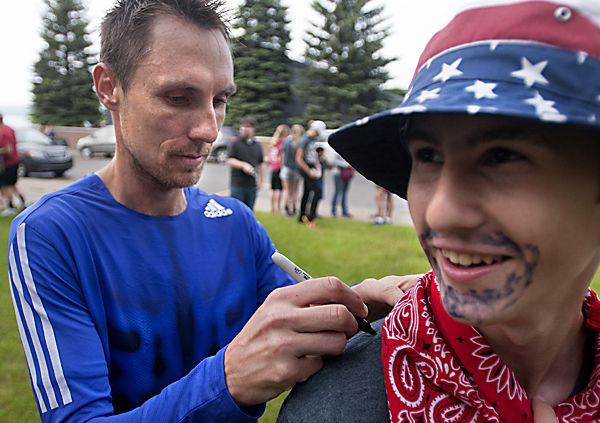 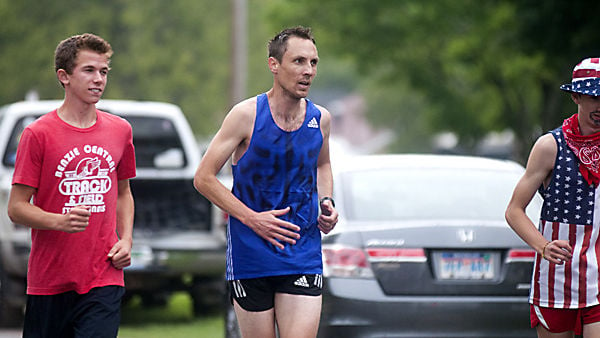 BEULAH — For Noah Robotham, Max Okros, Joey Johnston and Jeffrey Crouch, Monday was a day none of the four is soon to forget.

It was the day they teamed up to beat an Olympian.

"I thought we would be a little bit behind him, like probably five or 10 seconds behind him," said Robotham. "He was about five to 10 meters ahead of me (when I got the handoff). Just seeing him running right there I was thinking, 'O.K., I can get him,' and I just went for it."

The event, which helped raise money for improvements to the track at Benzie Central High School, featured Willis running the mile against 15 4x400-meter relay teams who entered. Robotham, the anchor leg for his team — dubbed the Bearded Warriors —  used that late push to surge past Willis near the end of the race to finish first in a time of 3 minutes, 56 seconds. Willis, who has a personal record time of 3:49 in the mile and was the silver medalist at the 2008 Summer Olympics in Beijing, finished in 3:58.

"I'm very happy (with my time)," said Willis. "I had no idea how it would go. You don't know how far ahead the relay teams are going to be or how far behind. You've got to judge your own pace. It worked out perfectly. There were two teams right around me. I was able to just hang on to them. We had a bit of a traditional westerly headwind for the last half-mile, but having the competition helped make the difference."

Willis, who has a family cottage in the area and occasionally runs with the Benzie track and cross-country teams when he's in the area, was eager to lend a hand when he learned about Benzie's fundraising efforts. That, coupled with his need to get ready for this weekend's Adidas Grand Prix race in New York City — the start of his professional season — made the decision to hold a running event a no-brainer.

"I just needed to practice the routine of doing a warmup, eating right, all of the mental side of preparing for a race right up to the point," said Willis. "These guys really showed up in support and I hope it helps give some platform to their fundraising effort for their new track, which I hope to use in the coming years."

It certainly was a thrill for the competitors, including the winning team.

"He was behind me when I first got the handoff," said Okros, the third leg of his relay. "But when I was about 100 meters from where the next handoff was he just started passing me. He kept it real smooth. It was kind of intimidating, but it was fun."

Benzie Central coach Asa Kelly called the event "special," and could only smile when reflecting on Willis' performance.

Kelly also marveled at the ability of some of his own runners to come out on top.

"They were warming up for about an hour," he said. "They came to run tonight. It's something they will talk about for the rest of their lives, too; the time they got to go and beat an Olympic medalist."