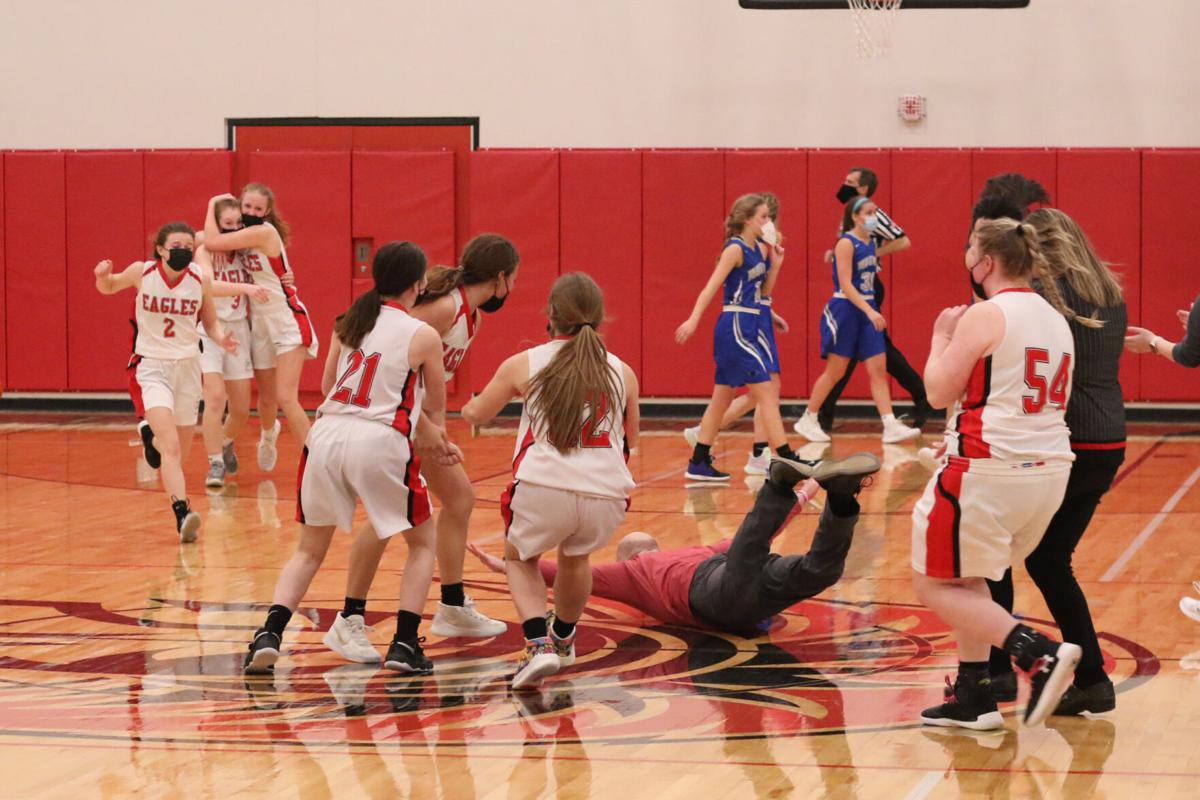 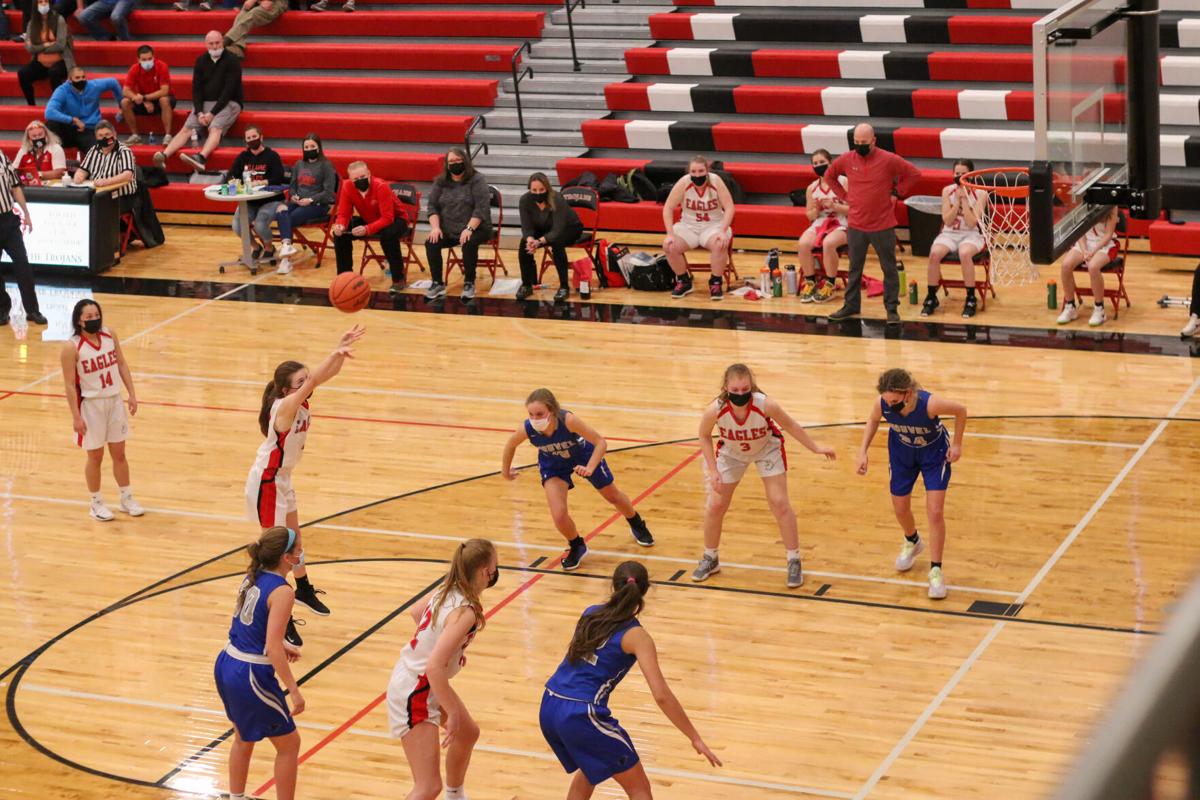 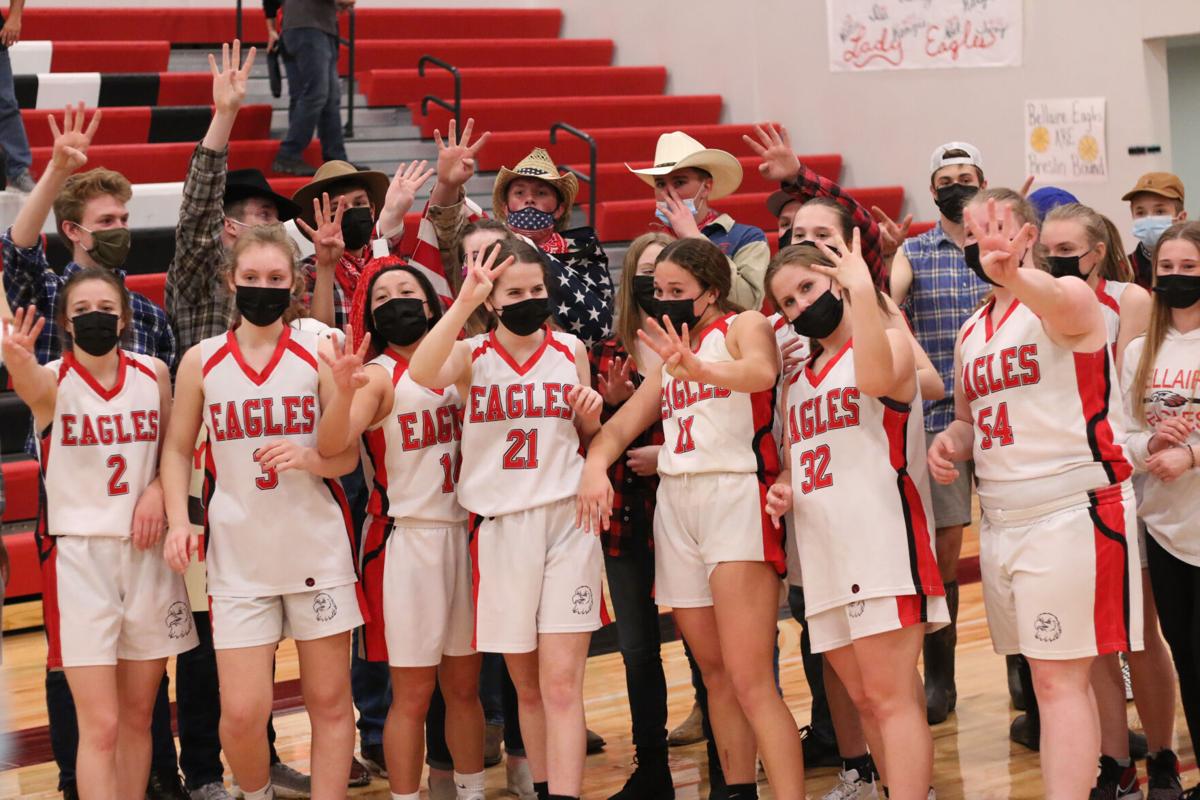 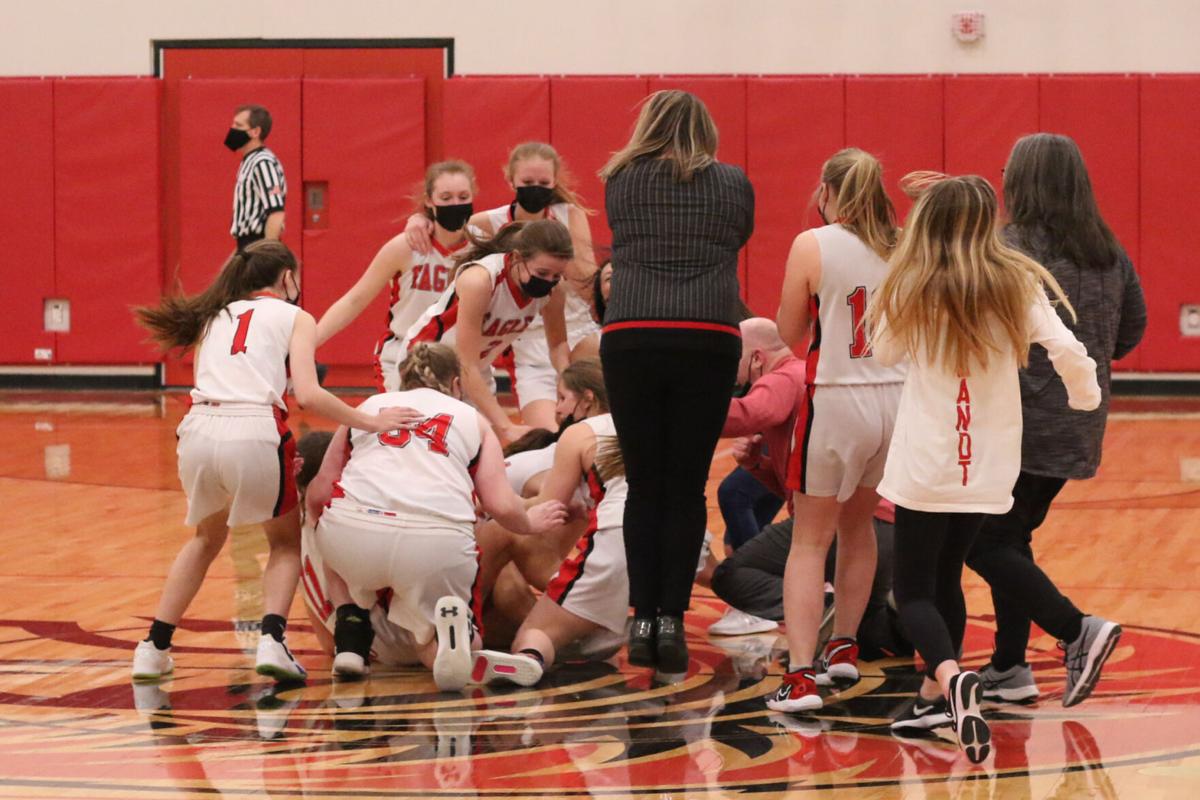 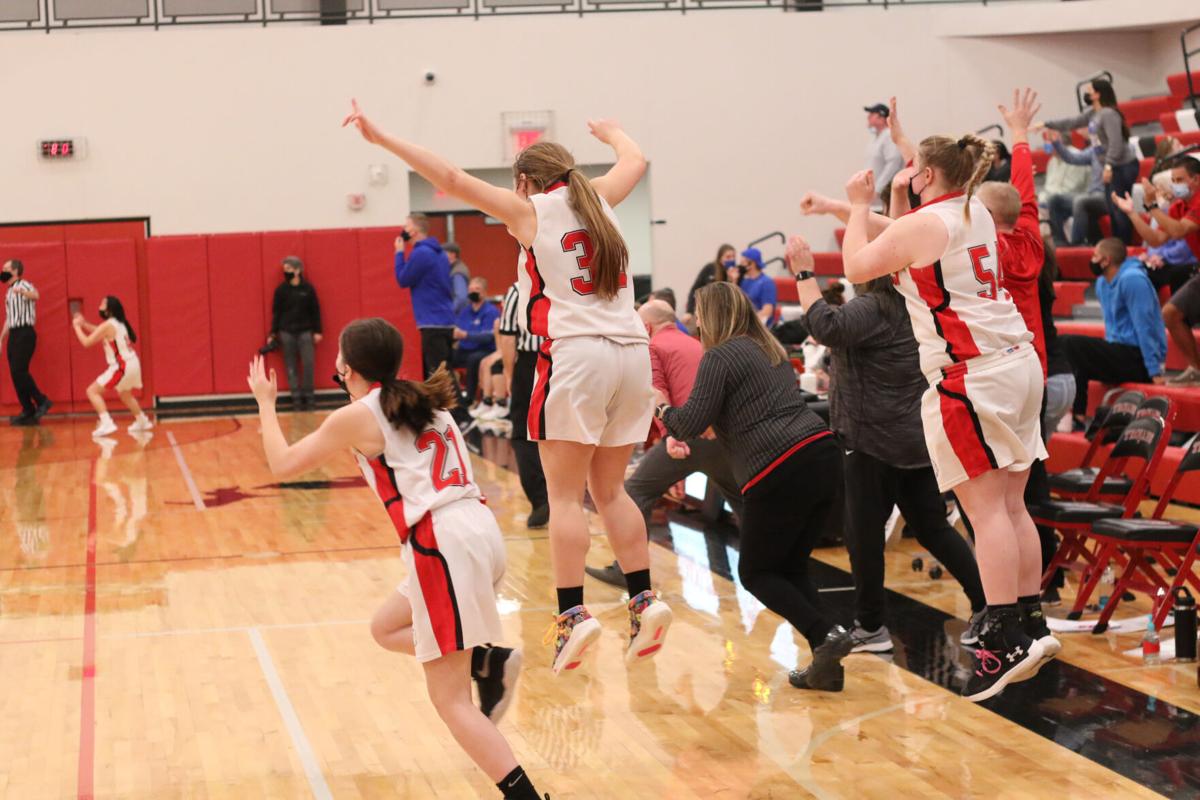 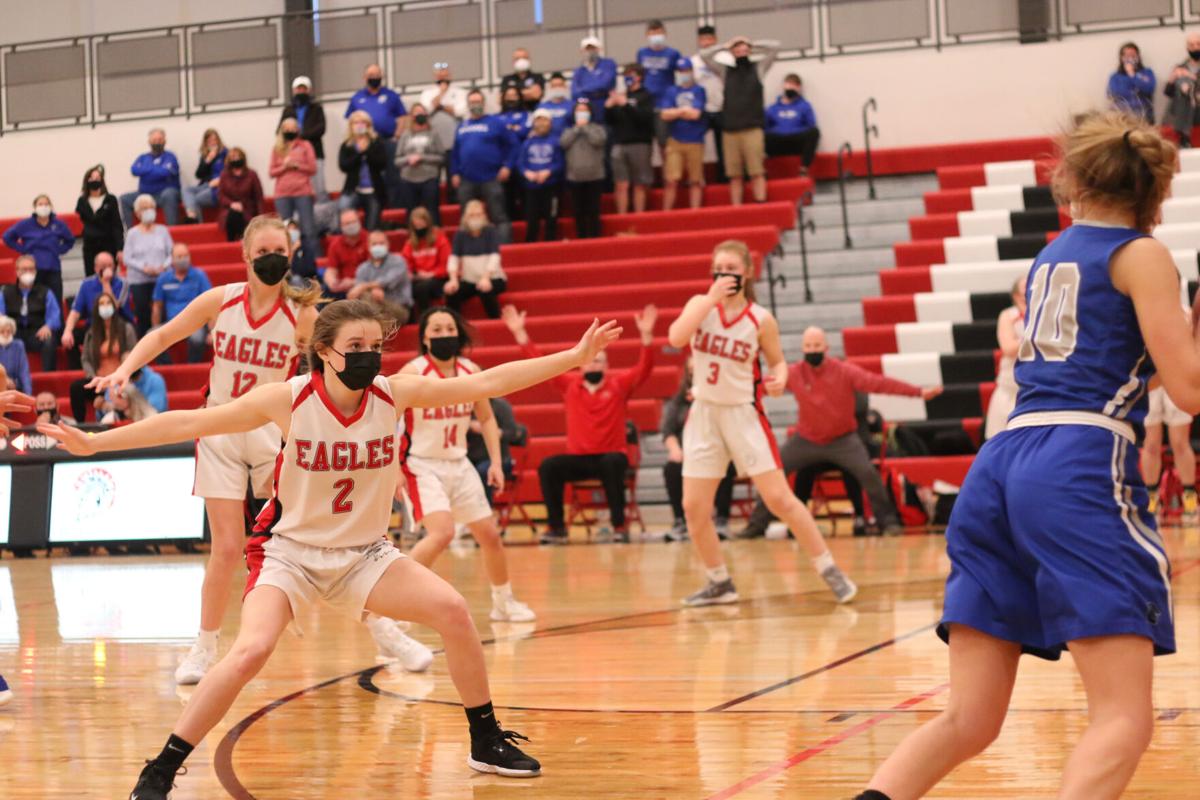 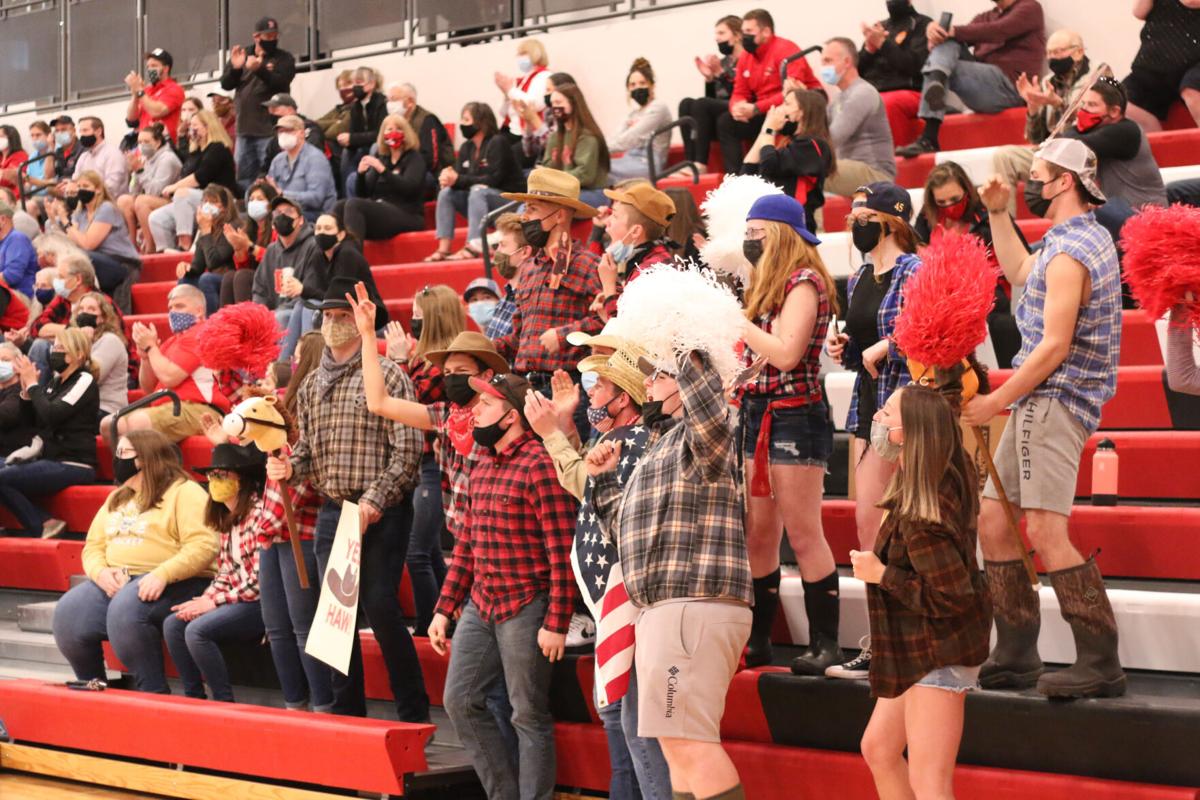 The Eagles student section celebrate a point in a Division 4 state quarterfinal against Saginaw Nouvel at Lake City Monday, April 5. 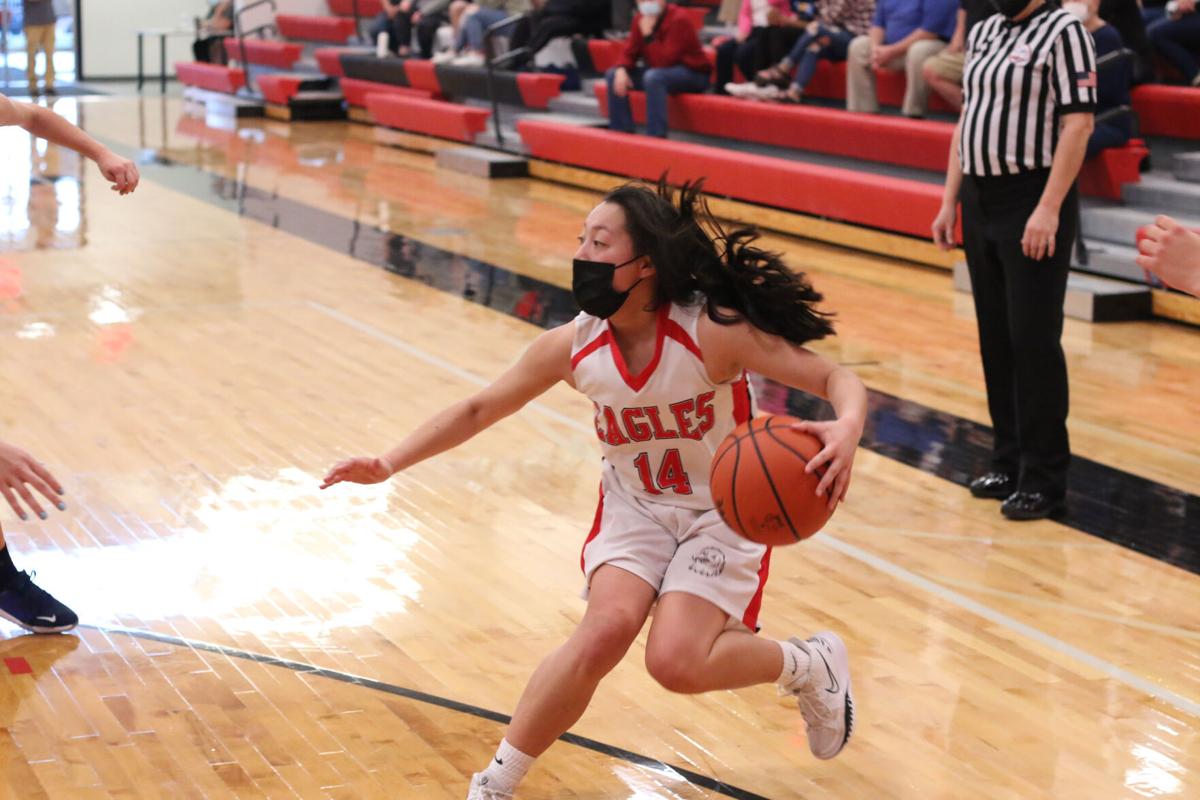 Bellaire senior Noel Mann steps back for a 3-point attempt in a Division 4 state quarterfinal against Saginaw Nouvel at Lake City Monday, April 5. 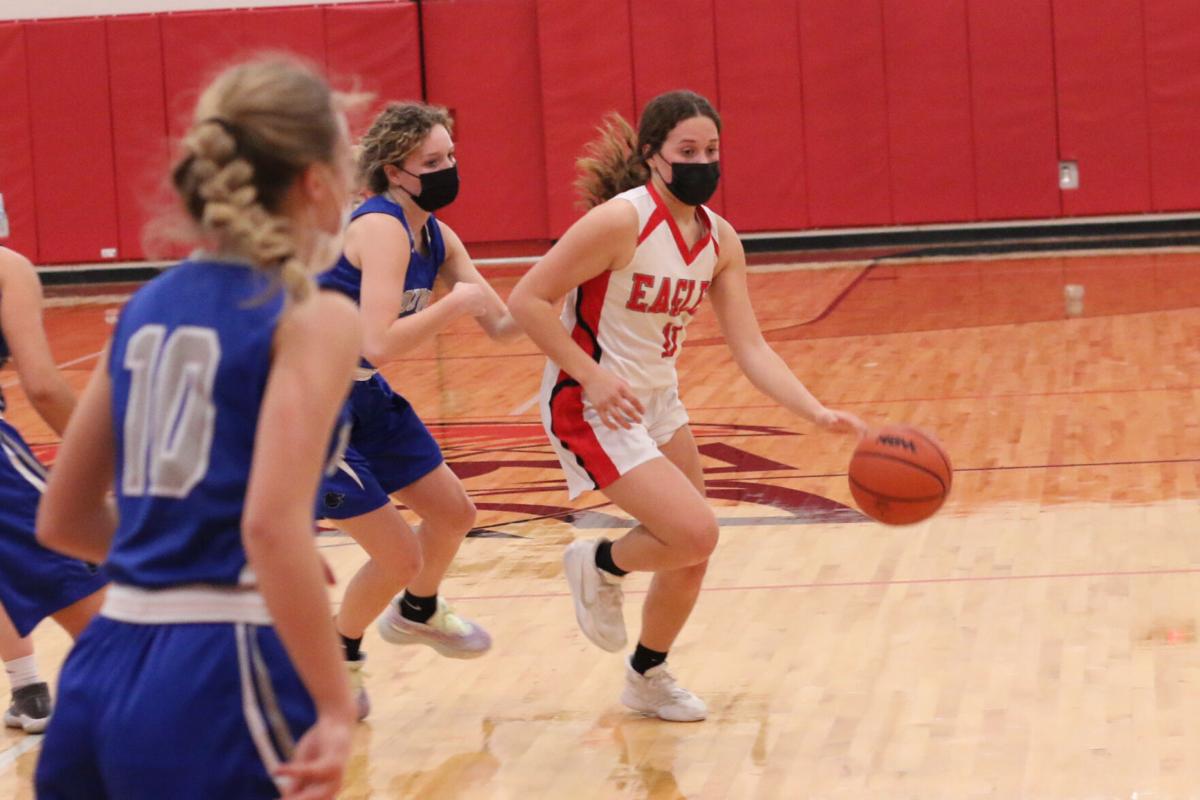 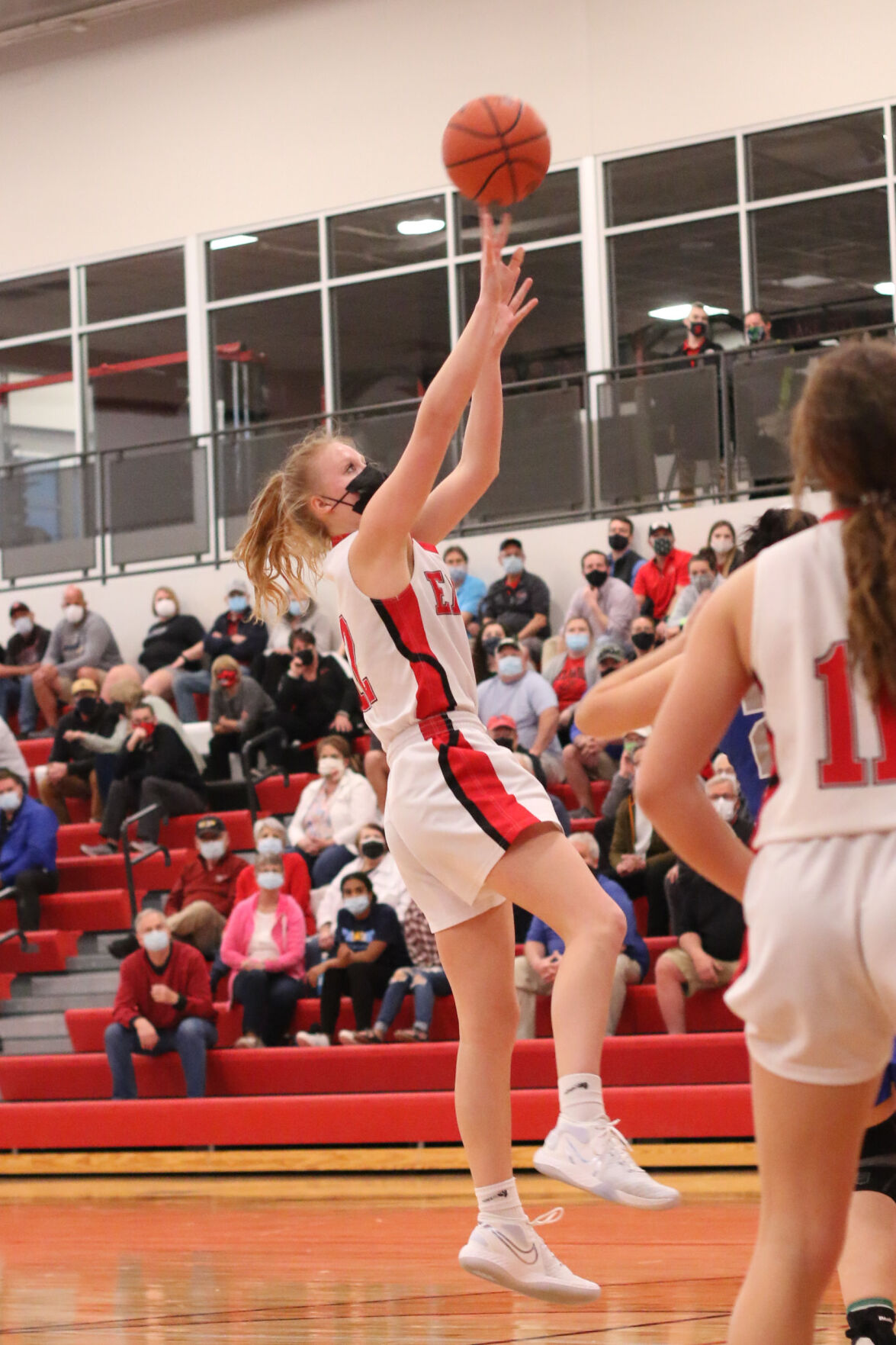 Bellaire sophomore Jacey Somers steps back for a basket in a Division 4 state quarterfinal against Saginaw Nouvel at Lake City Monday, April 5. 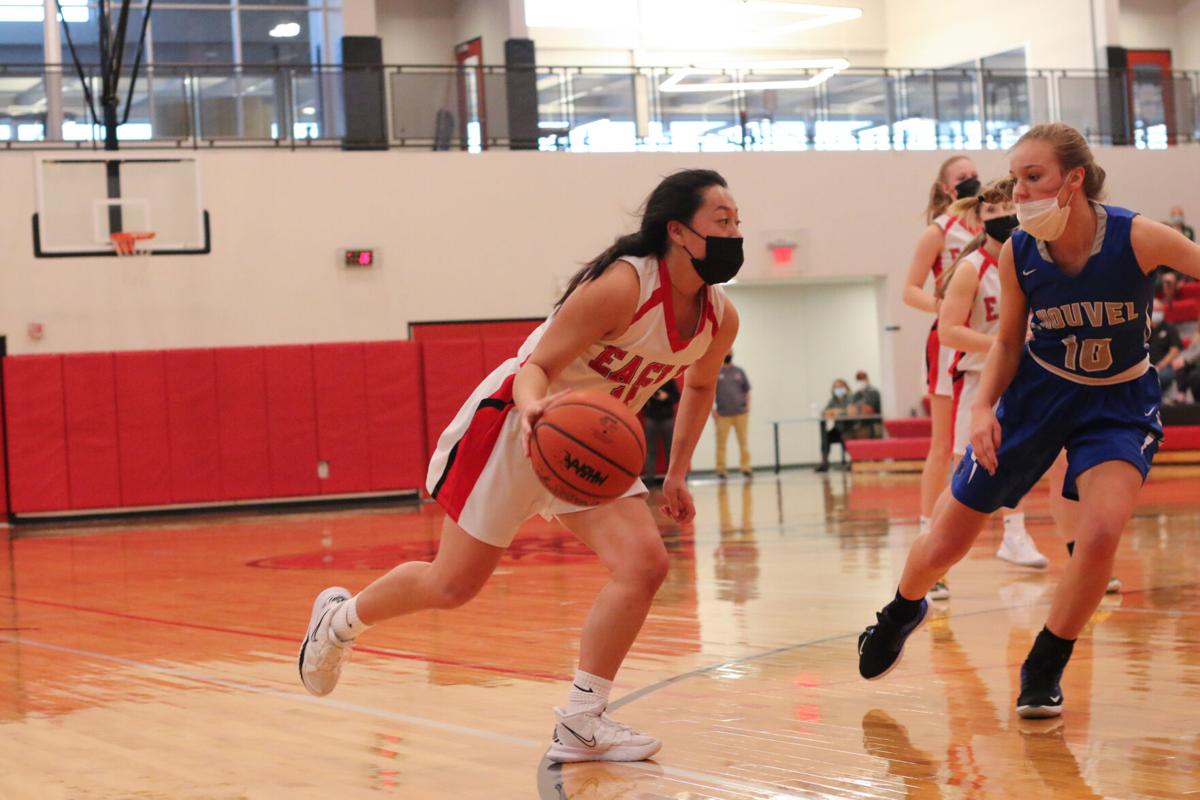 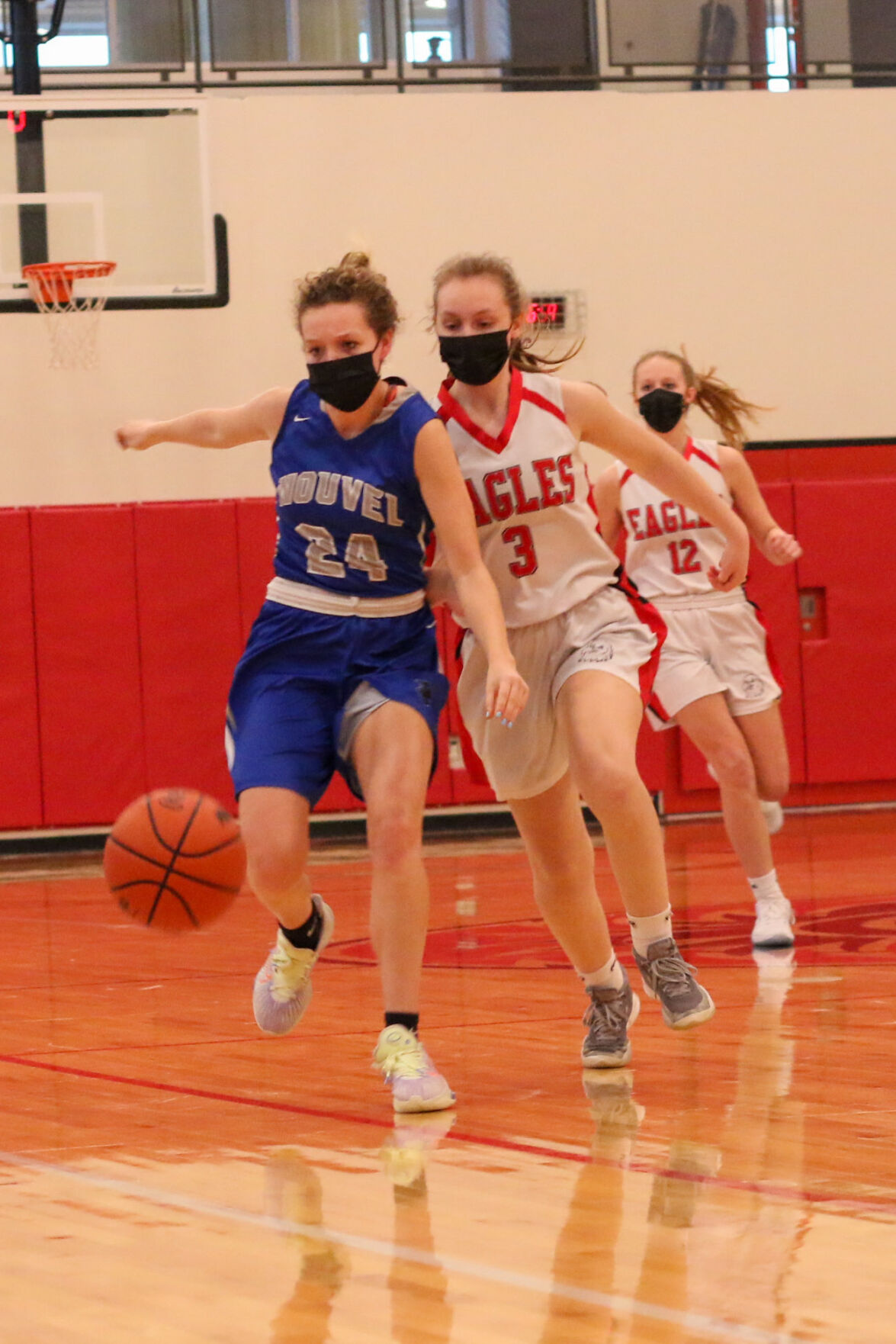 The Eagles student section celebrate a point in a Division 4 state quarterfinal against Saginaw Nouvel at Lake City Monday, April 5.

Bellaire senior Noel Mann steps back for a 3-point attempt in a Division 4 state quarterfinal against Saginaw Nouvel at Lake City Monday, April 5.

Bellaire sophomore Jacey Somers steps back for a basket in a Division 4 state quarterfinal against Saginaw Nouvel at Lake City Monday, April 5.

LAKE CITY — Since they were in second grade, Delaney Goodwin said the Eagles have talked about one day playing in the Breslin Center.

Ten years later Goodwin helped Bellaire inch one game closer to that being a reality.

Bellaire is in the Final Four for the first time in school history. It beat second-ranked Saginaw Nouvel Catholic Central in overtime 43-42 after facing a two possession deficit for most of the game.

The Eagles (17-3) will meet Petersburg Summerfield (15-5) at Van Andel Arena in Grand Rapids Wednesday. The winner heads to the Breslin Center Friday for the state championship.

Goodwin swished two free throws with 5.3 seconds to play to force overtime, tying the game at 34 points. The Eagles were down by five not even a minute before that, but Jacey Somers scored a 3-pointer to go within a basket and the Eagles forced a turnover to get the ball back.

Goodwin was fouled on an inbound violation to send her to the line for a one-and-one. She hadn’t yet scored at that point in the game.

Somers, returning from COVID-19 quarantine for her second game of the postseason, swished two free throws of her own at the end of overtime to increase the lead to three.

Nouvel did score a basket at the end of overtime, but the layup was uncontested and the Panthers didn’t go to the charity strip for an and-one.

“We’re organized chaos,” Fischer said. “For the good and bad take us for what we are, but we mean well. We make it hard on ourselves but you also have to give Saginaw Nouvel credit for their length and their quickness.”

Somers returned from COVID-19 quarantine and didn’t skip a beat. She scored a game-high 15 points and dominated the defensive glass. Somers grabbed 12 rebounds, snagged two steals and had a block.

“She’s gonna be a tired sore girl, but like we said, we’d figure that out tomorrow,” Fischer said. “Definitely wasn’t pretty. But the girls did what they needed to defend and pull it off against a very, very quality Saginaw Nouvel team.”

The Panthers held a four point lead at the half, but the Eagles and their famed full-court press held them to a four points in the third quarter to tie the game at 20. Bellaire stayed within two possessions the entire game.

No Panther scored in double digits.

Madison Looby and Sterling Solek led the Panthers with nine points each. Nouvel’s season finishes at 19-2 with losses to Bellaire and Standish Sterling.

Bellaire scored six of their nine field goals from beyond the arc to make up for a 33 percent field goal clip. The Eagles also made 7 of 9 free throw attempts. Nouvel finished shooting 12 for 43 from the field for 27 percent.

“After our Leland game, we knew we can come back from anything,” Goodwin said. “So we don’t get down on ourselves when we’re down, and he’s (Fischer) telling us ‘We can do what we put our minds to.’”

Bellaire’s game with Petersburg Summerfield tips off at 12:30 Wednesday.

The winner of that game meets the victor of No. 1 Carney-Nadeau (22-0) and No. 10 Fowler (14-4) Friday at 10 a.m. at Michigan State University’s Breslin Center in East Lansing. Those two teams play in the game before Bellaire’s game with a 10 a.m. tip.

BELLAIRE — The Bellaire girls basketball team dreamed of a trip to the state finals since elementary school.