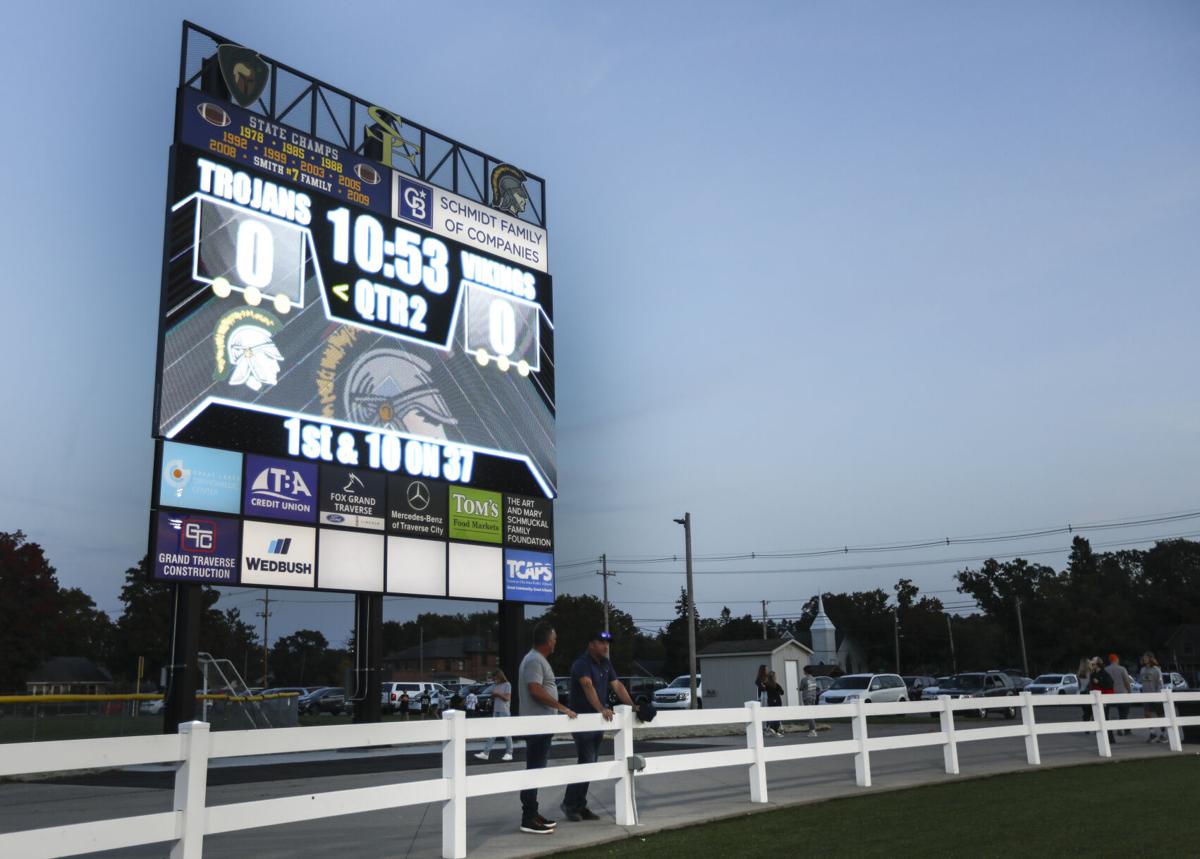 People stand under the video board in the east end zone at Thirlby Field in Traverse City on Friday, Oct. 1. 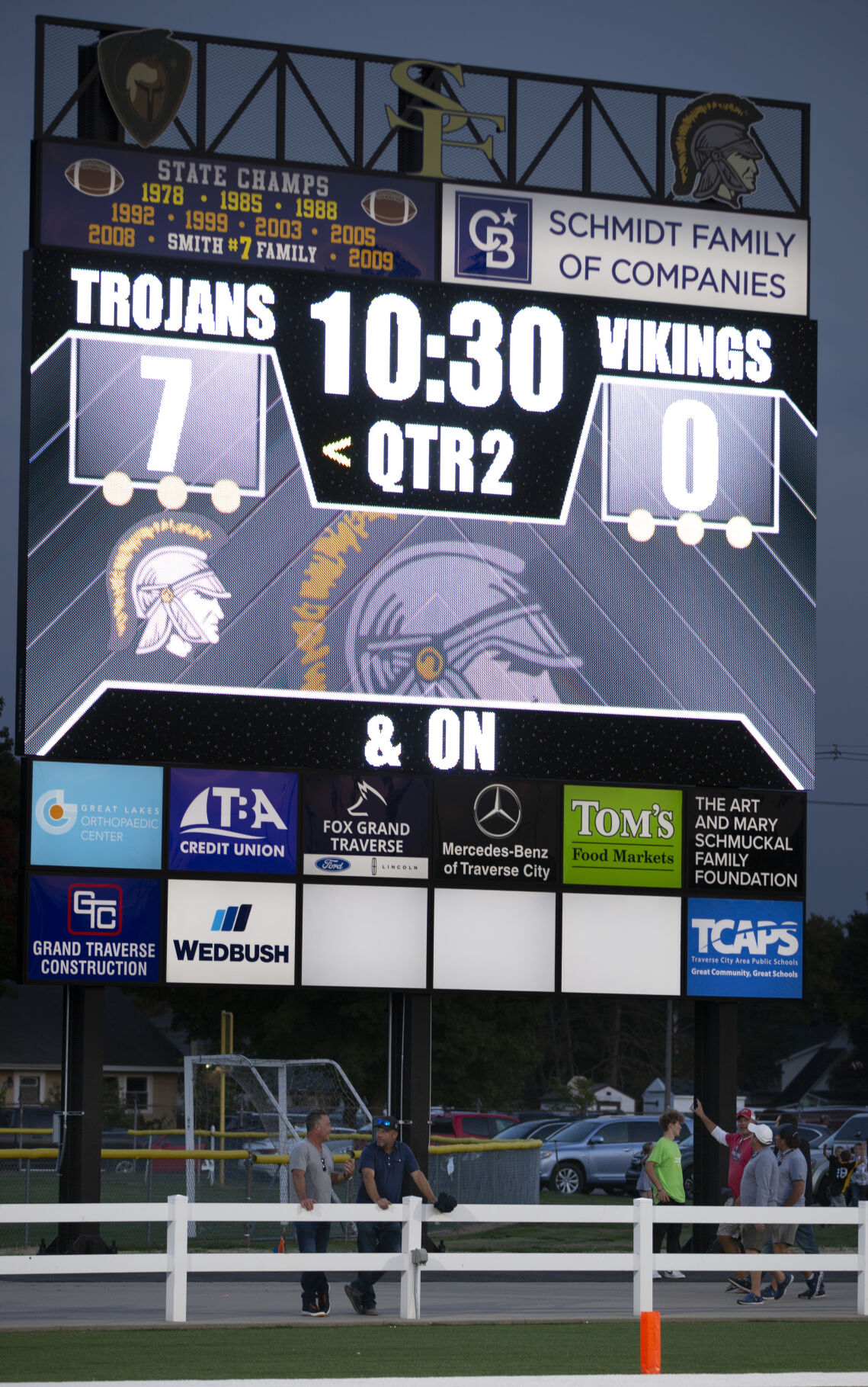 People stand under the video board in the east end zone at Thirlby Field in Traverse City.

People stand under the video board in the east end zone at Thirlby Field in Traverse City on Friday, Oct. 1.

People stand under the video board in the east end zone at Thirlby Field in Traverse City.

TRAVERSE CITY — Finding the right words to capture what it means to be part of the Traverse City Central football community is difficult for Mike Schmidt.

He takes a few beats before he finally settles on one.

Although that might seem cliché to some, that’s not the case for Schmidt, who spent summers cooking hamburgers and hot dogs for his two sons, Grant and Parker, and their Trojan football teammates in his backyard.

Schmidt’s sons are third-generation Central footballers. His father, Ken Schmidt, played in the 1950s, and Mike played in the late ‘80s and early ‘90s with Matt Bourdo — whose son, Carson Bourdo, now stars for the state-ranked Trojans alongside Grant and Parker.

So the word “family” is far from an exaggeration.

“Playing in that program has changed all of our lives,” Schmidt said.

For some, just a single year as part of Trojan football can be life-changing. Just ask Steve Smith, whose grandson, Peyton Smith, transferred from Ithaca High School to Central for his senior year in 2019 and is now a redshirt freshman quarterback at the University of Michigan.

Smith described that one year as something out of a storybook or from a movie.

“All the kids, the coaching staff, the administration, all the parents and the grandparents — the whole community — welcomed us like we were already family,” Smith said. “They were so good to us, you could hardly even believe it.”

For all they have received, the Schmidt and Smith families wanted to make sure they gave back.

And give back they did — in a big way.

Those who happen to glance toward the top of the new jumbotron scoreboard on the east end of Thirlby Field will notice two surnames: Smith on the left, and Schmidt on the right. The two donated $100,000 each to help construct the $450,000 behemoth, with the final quarter-million dollars being raised through grants, other private donations and advertising sales.

“We felt like this would be something that would continue to give to generations on and on down the line,” Schmidt said, adding that the new scoreboard goes beyond just Central as both Traverse City West and Traverse City St. Francis athletics also use the field.

The project came together rather quickly, and quicker than most expected.

Traverse City Area Public Schools Superintendent John VanWagoner said discussions about a new scoreboard ramped up in the spring, but the COVID-19 pandemic previously made it difficult to make any progress. The belief was that all of the money — the full $450,000 — needed to be raised by mid-July if there was any chance of the board being up for the fall football season.

Although the Schmidt family already promised the $100,000, the deadline came and went. VanWagoner assumed they would have to wait at least another year and devise a fundraising plan to put it all together.

“So I let it go for a month, maybe even two months. I figured that was it,” VanWagoner said. “All of a sudden, I get a phone call from Mike and Ken Schmidt who told me there was another gentleman who was interested in being a sponsor for the board.”

Smith was that gentleman.

“I wanted to help to get it done now, not a year or two from now,” Smith said. “I want these kids that played with Peyton, these great kids, to have something — something like that.”

Smith previously bought a similar scoreboard that’s installed at Ithaca Community Stadium, and his professional relationship with Daktronics, the makers of the scoreboard, helped move the process along quicker.

“I got a hold of Daktronics and said, ‘Hey, c’mon. Let’s make this thing happen,’” Smith said.

Once Smith was on board, it took just three weeks to raise the rest of the needed funds through a donation of $37,500 from the Art and Mary Schmuckal Foundation and ad sales.

Schmidt called Smith, who just so happens to be his neighbor, a “complete blessing.”

“He made it work,” Schmidt said. “They’re a great family and really good people.”

Even with the money in hand, VanWagoner thought getting the scoreboard up and running by Oct. 1 — Week Six of the football season — was “almost impossible.” They did better than the impossible and had it ready for Week Five for West’s 40-0 win against Alpena and St. Francis’ 48-14 victory over Boyne City.

“A lot of people came together with donations and even some of the labor of putting it up,” VanWagoner said.

Donors and others who helped with the construction of the scoreboard were honored at Thilrby Field last week before Central’s 56-13 drubbing of Brother Rice. VanWagoner said the TCAPS Board of Education will also recognize them at a future meeting.

The project, which was fully funded without a single taxpayer dollar, continues a long tradition of improving Thirlby Field through private donations.

Diane Portenga was part of Between The Fences decades ago when Thirlby Field was completely renovated and rebuilt to what it is today. The booster club helped raise nearly all of the funds needed to get the job done. Jim Ooley, who was the Traverse City football coach at the time, gave the public the final push necessary to get over the proverbial goal line.

“There was no money for the school system at that time,” Portenga said. “What that showed then — and what this (scoreboard) shows now — is that if the money can’t be raised through taxes, maybe it can be raised through the generosity of people. We don’t have to settle on not being able to do it.”

Portenga sees such efforts as major positives for the community.

“We ended up getting a lot of people who might not have been what you would consider ‘football people’ or ‘football parents’ — I was not a football parent — to support it,” Portenga said. “It’s a testament to how our community can respond to a need or a want.”

The scoreboard isn’t likely to sit dormant when football isn’t in season. Other athletic competitions, including lacrosse, take place at Thirlby Field. VanWagoner believes it will be great for marching band shows and would even be useful during the Traverse City Film Festival or other movie-in-the-park-like events.

“It has endless opportunities,” VanWagoner said. “We’re excited to have it.”

MIDLAND — Twinbill losses last month to Midland and Midland Dow are now in the past.