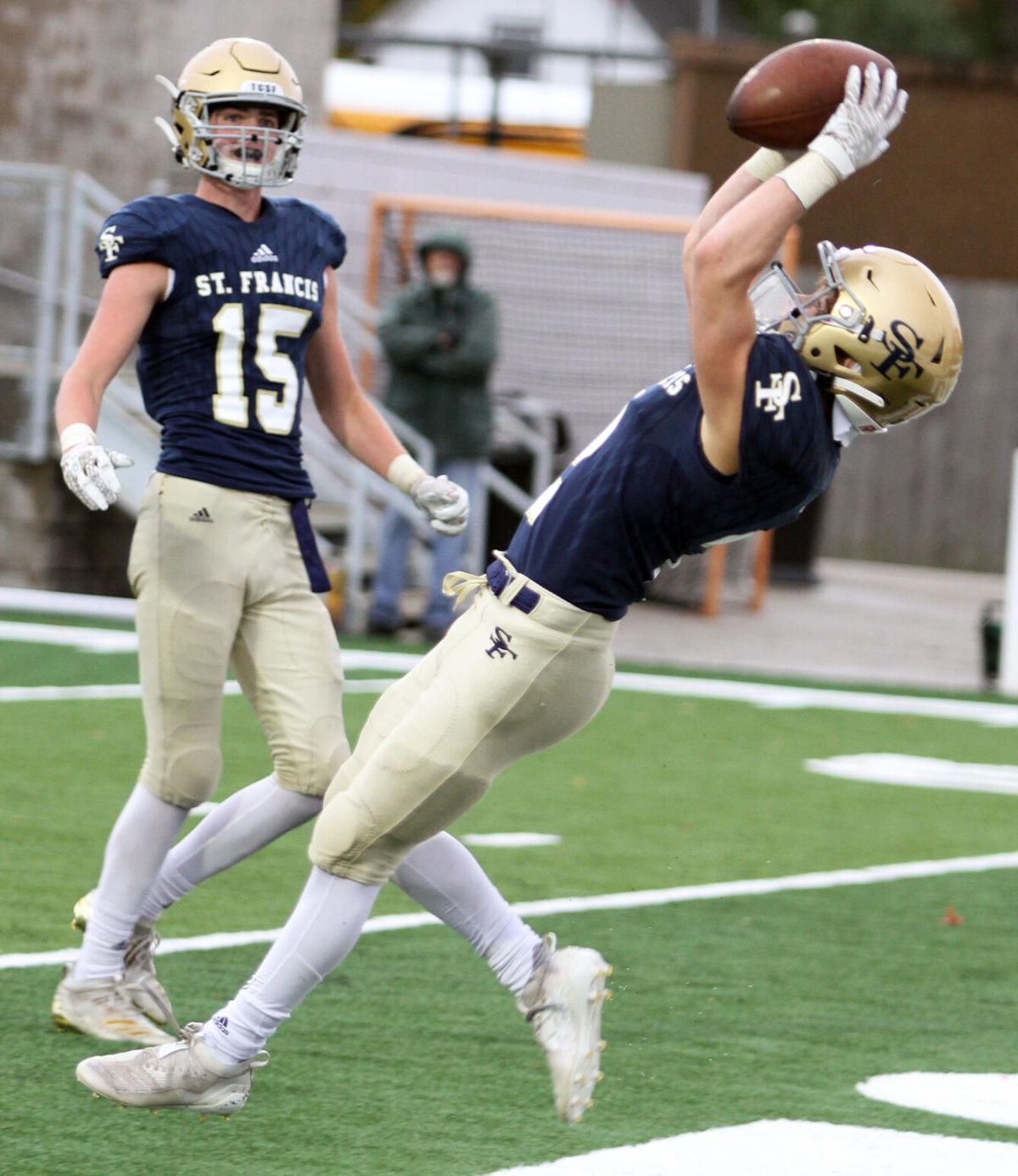 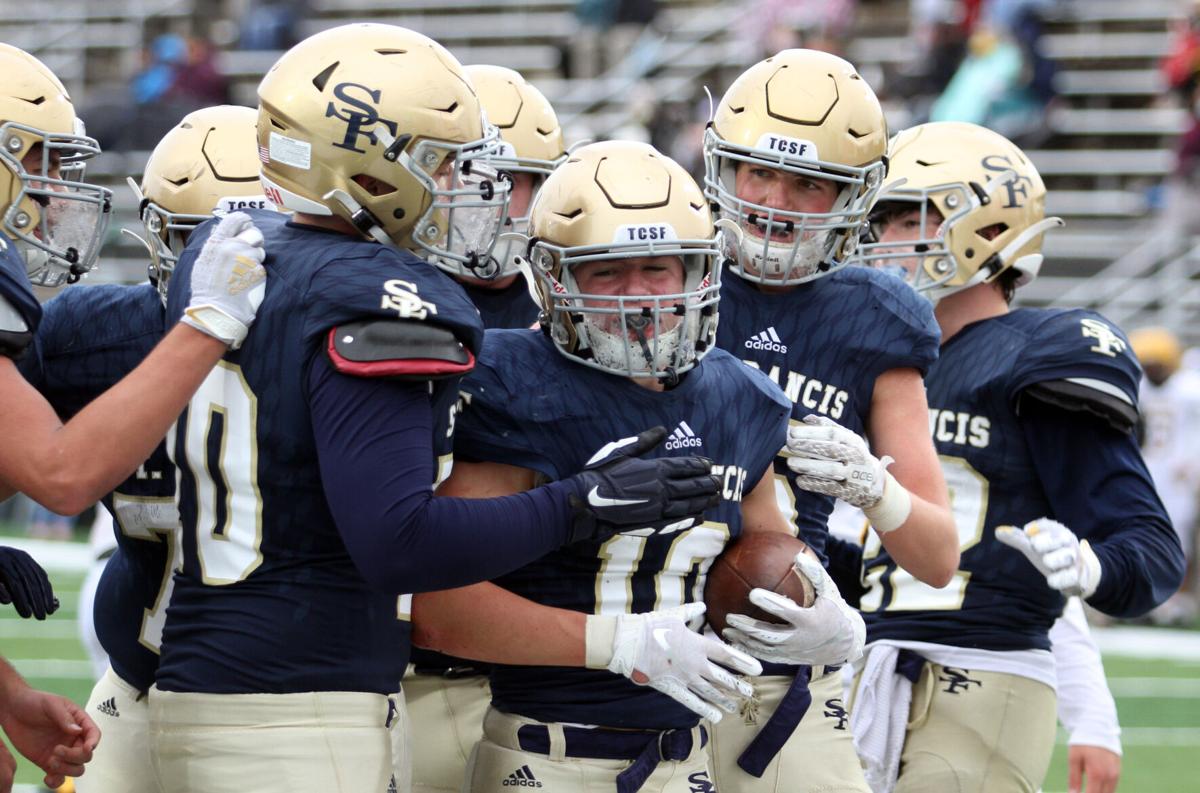 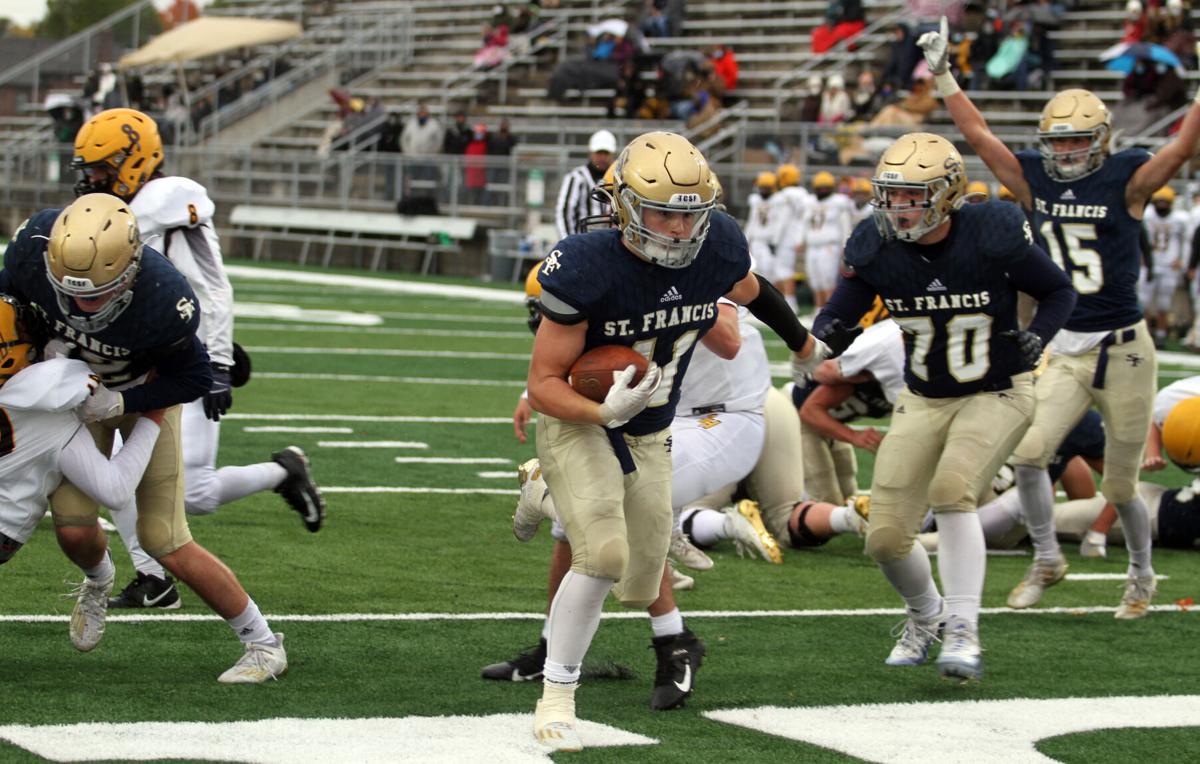 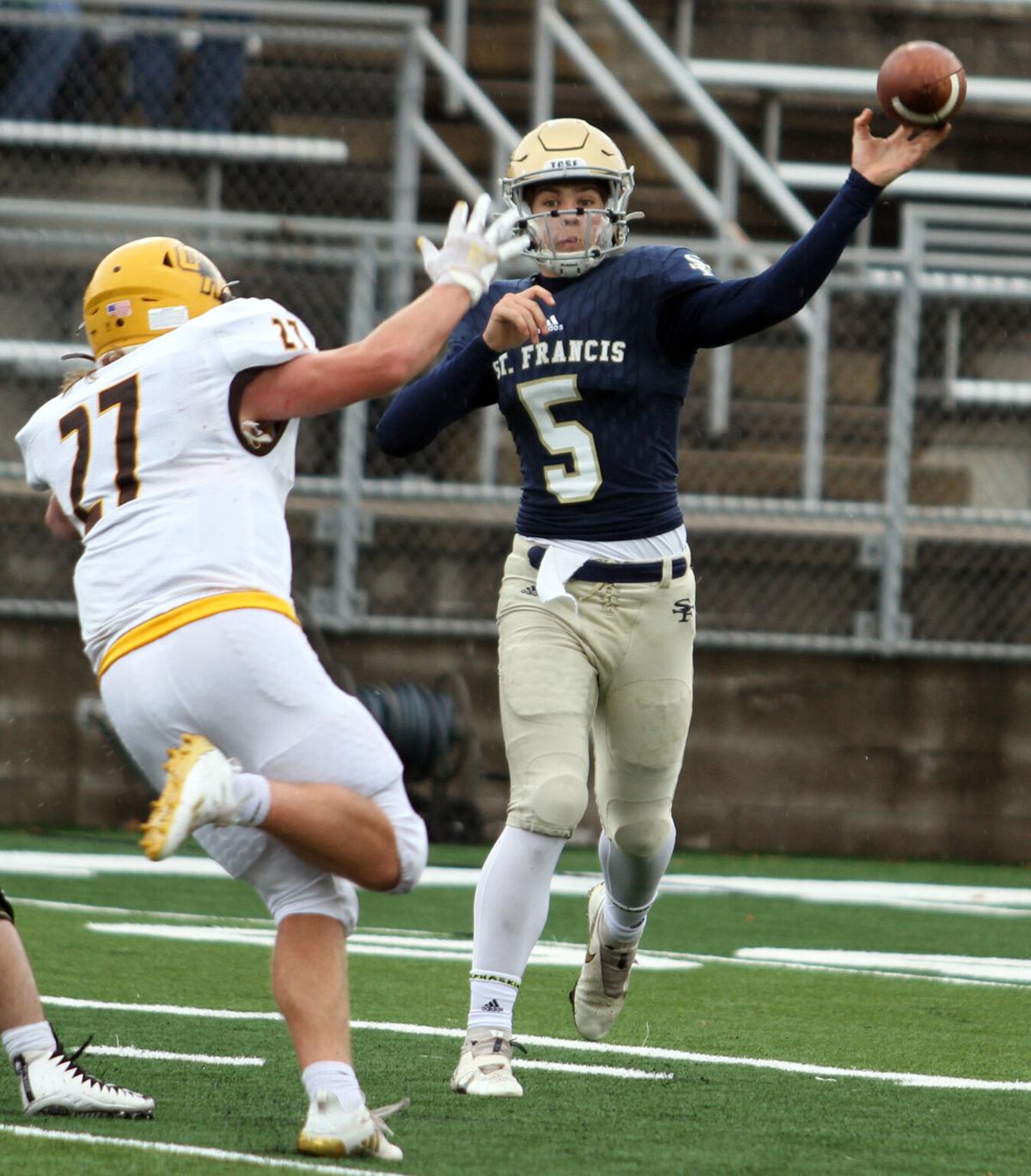 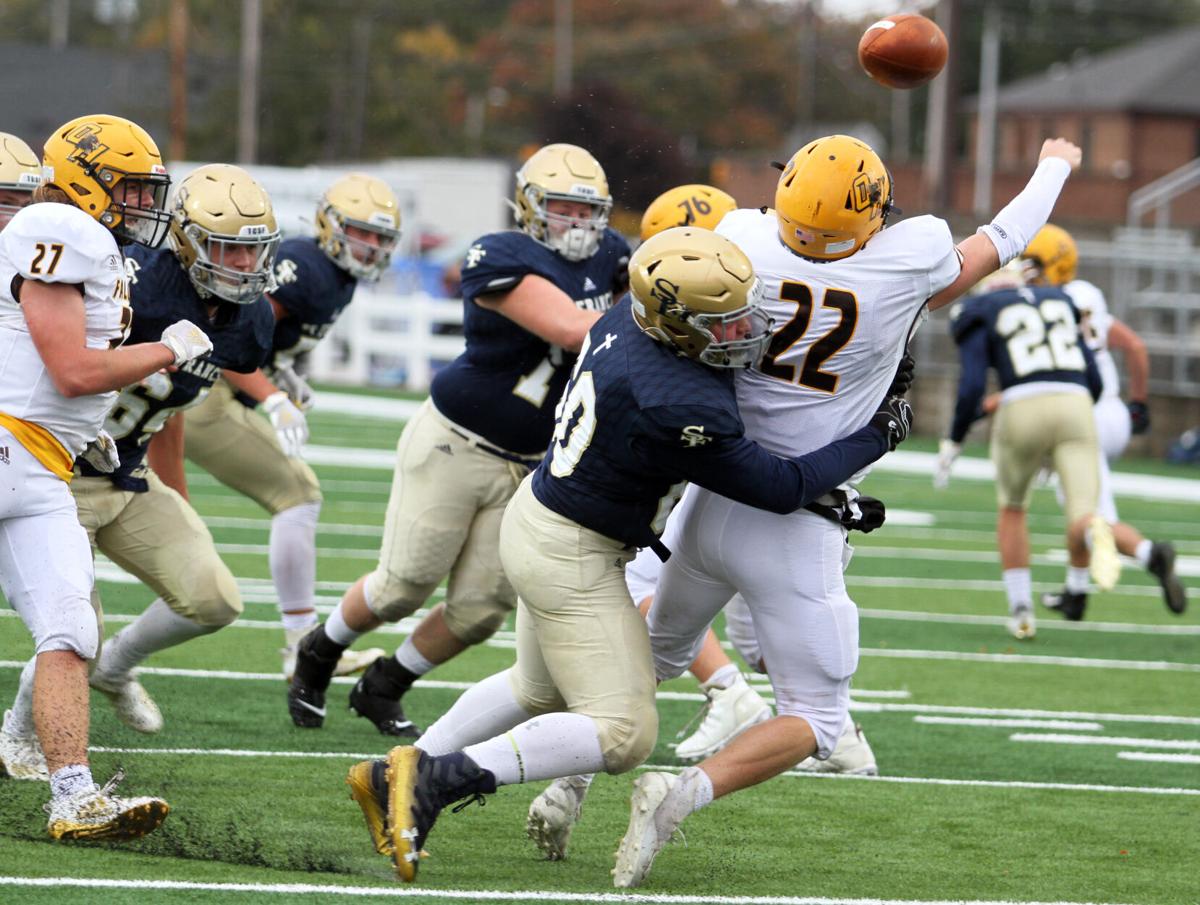 The Gladiators played the program's 700th varsity football game Saturday regardless of the outcome, but a 35-14 win over Ogemaw Heights rung in the historic contest with a little extra flair.

"The 700 — it a has a big impact on our team," St. Francis offensive tackle Corbin Domres said. "That gives us a little bit more motivation when we go out there and play."

"It's pretty, pretty incredible to be a part of this program," Gladiators head coach Josh Sellers said.

The Glads won by three touchdowns after being tied at 14 into the fourth quarter, as the Gladiator defense sunk its heels in and stopped three straight Ogemaw Heights drives with only one first down among them.

St. Francis (3-2) forced four turnovers, which helped offset Ogemaw's definite advantage in time of possession. The Falcons (3-2) held onto the ball for 31:17 out of 48 minutes.

Casey Donahue factored directly in two of those turnovers, intercepting a pass and recovering a fumble forced by a sack by sophomore lineman Ethan Morgan. Gavin Nickodemus and Wyatt Nausadis also picked off passes.

Ogemaw Heights noticed a junior varsity player who had just been called up at cornerback, and went right at him two times for fourth-quarter completions. The Falcons should’ve stopped there, as Wyatt Nausadis intercepted the third pass thrown his way soon thereafter.

Aidan Schmuckal tipped a Tousigna pass and Gavin Nickodemus snatched it up for a pick that set up Charlie Peterson's 17-yard touchdown pass to Ayden Ferris with under a minute left for a 35-14 final score.

The victory prevents a winless home slate for the gladiators, who had lost their previous two games at Thirlby Field.

"We couched this game as kind of a heavyweight slugfest, because we knew both teams are going to want to run the ball," Sellers said. "We came out, hitting pretty well on all cylinders and, and then that third quarter was ugly. We hardly had the ball, but our kids stood up when they had to stand up and they made plays when they had to make plays. So between the goal line stand and then Charlie's scramble, just a huge momentum shift in the game."

Peterson kept the ball after Ogemaw's defenders blanketed TCSF receivers and raced 55 yards for a touchdown to give St. Francis a 21-14 lead with 10:32 remaining. The Falcons punted on the next drive after Own Mueller broke up a third-down pass. Six plays later, Mueller scored from 4 yards out for a 28-14 advantage.

St. Francis ran four offensive plays in the entire third quarter, as Ogemaw pounded away with the ground game, running all but once in 19 plays during the stanza. Fourteen straight runs put the Falcons on the Glads' 2, and Joey Donahue stuffed Somerfield on 3rd-and-goal from the 2 for a 4-yard loss to force a field goal try that went wide right.

"What stood out in the game was the ability to bend and not break completely," said sophomore linebacker Joey Donahue, who had 12 tackles. "There were definitely some points, especially coming out of half, when we could have lied down. But we kept fighting and it paid off in the end."

St. Francis hosts Jackson Lumen Christi next Saturday in a matchup of two of Division 7's top programs. The Titans (2-3) need to win that game to qualify for the playoffs, while the Glads need a win to have any chance to overtake 5-0 Charlevoix (which visits Glen Lake) in playoff points in the district.

"We're going to have to win next week, and get some help from Glen Lake for that to occur," Sellers said. "The new math, I don't even understand how the system works, so I will see. We'll go and try to win wherever we land, but hopefully this will help us secure at least a couple of playoff games, if we can keep winning."

"A lot of playoff points come with this win," Domres said. "Playoff points that we need to secure our spot, a good spot and potentially getting a couple of home games."

St. Francis never trailed, but the Falcons kept catching up in the first half. The Glads scored first on a Schmuckal 18-yard run on the game's first drive. Ogemaw matched with a Tousigna 1-yard run, but the extra point missed the mark, and TCSF held a slim 7-6 lead thanks to Brice Kempf's PAT.

"The first drive, we went down there and scored," Domres said. "That was a big, big play to me, because we haven't been starting as hot as we should be. That gave us a lot of momentum as the game went on."

The Gladiators did suffer a loss with the ankle injury of starting lineman Aidan Schurg in the fourth quarter. The 220-pound junior was in obvious pain after going down during a run play, and had to be helped off the field by two of his teammates. He was later carted to the locker room.

St. Francis ended up out-gaining the Falcons 381-275, despite the time of possession disparity, including 335-149 on the ground. Schmuckal led the Glads with 123 rushing yards on 15 carries, while Mueller added 122 on 13 rushes and Peterson gained 53. Ferris pitched in 43 on four attempts.

"I think we had the edge on speed over them," Joey Donahue said. "And I think we used that to our advantage."

TRAVERSE CITY — Tens of thousands of parents have asked for the science and data behind Gov.…

GLEN LAKE — The first day of soccer districts nearly had a northern Michigan power get upset.

MANISTEE — Manistee’s football games with McBain this week have been canceled because of a COVID-19 quarantine.