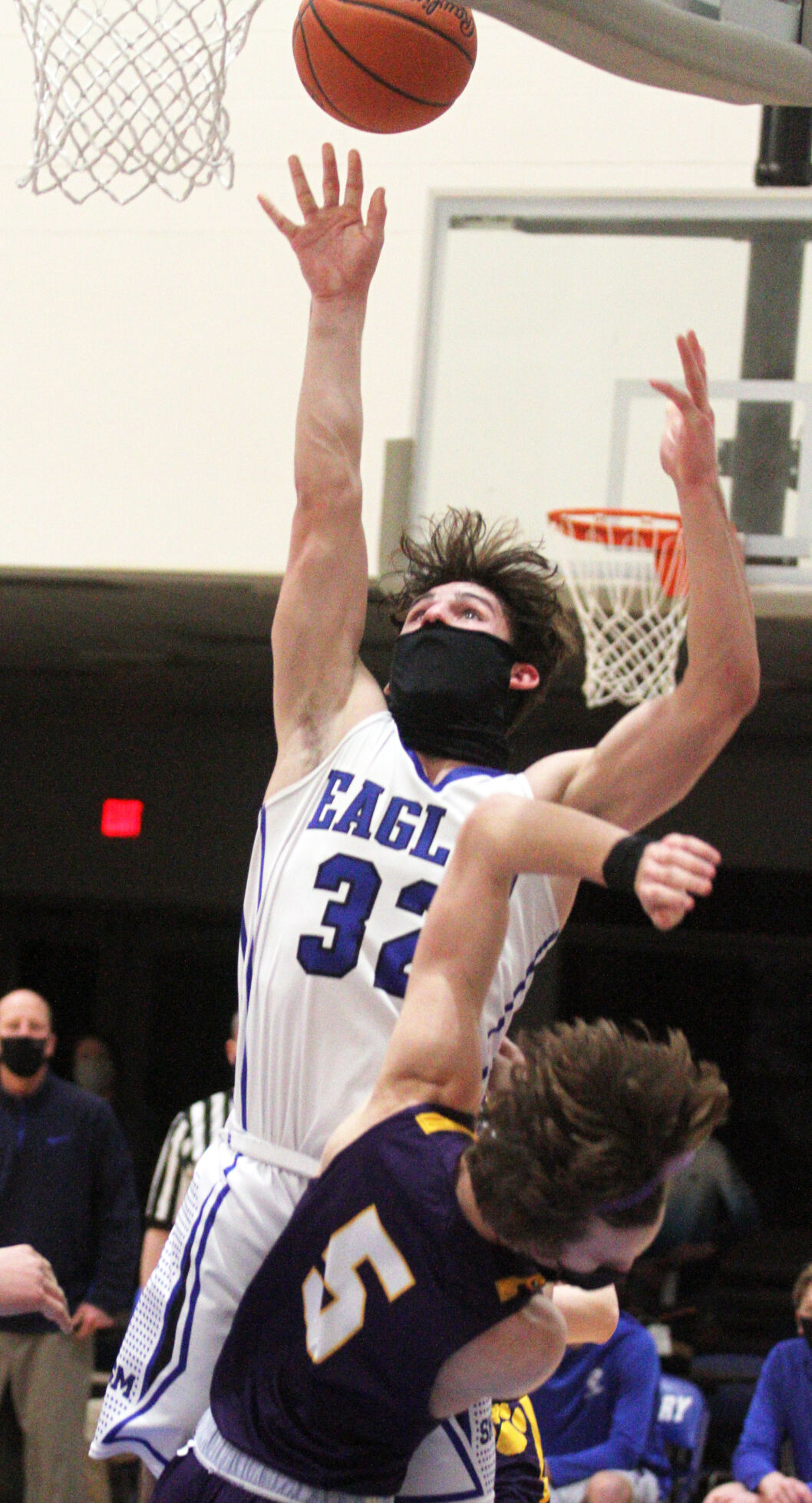 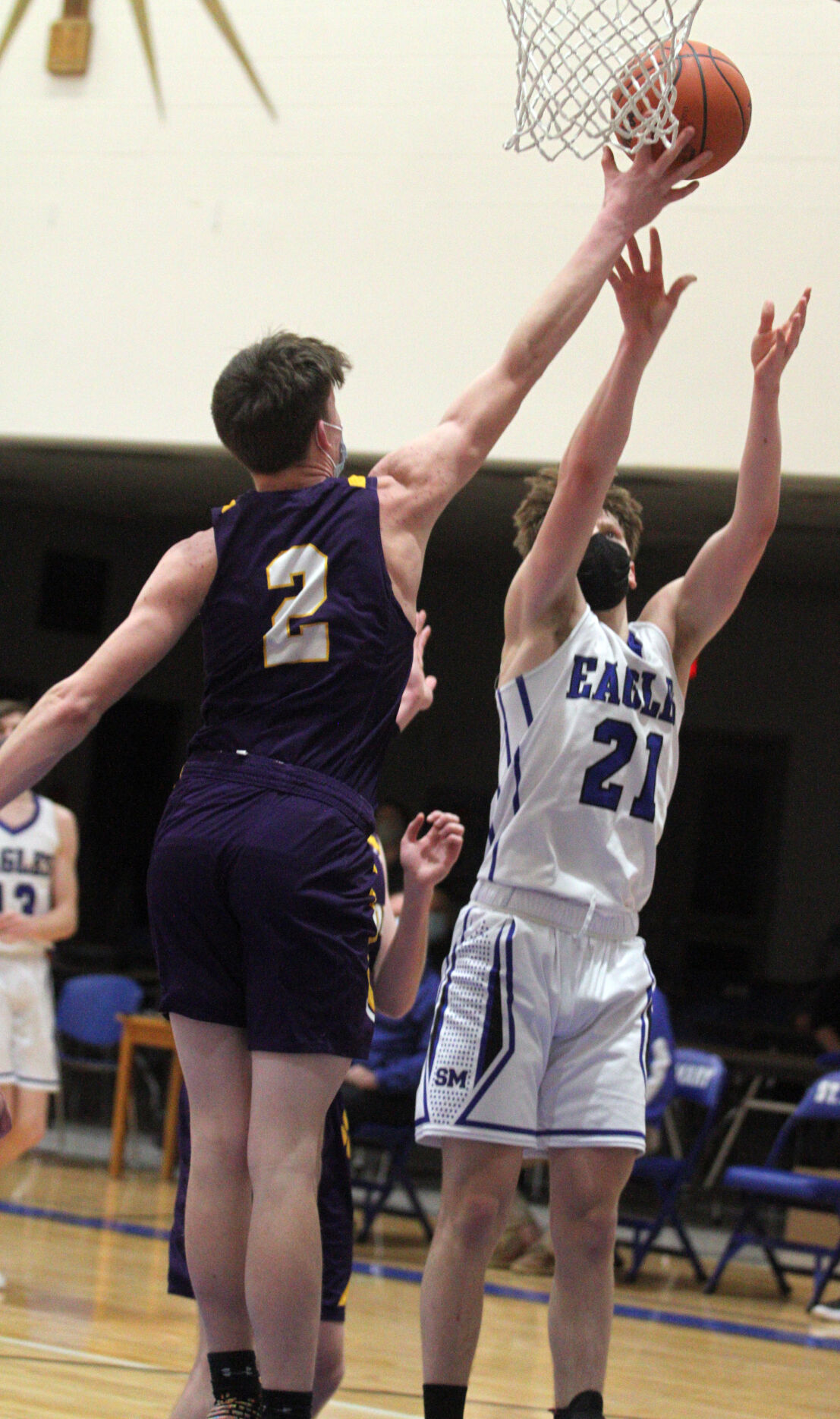 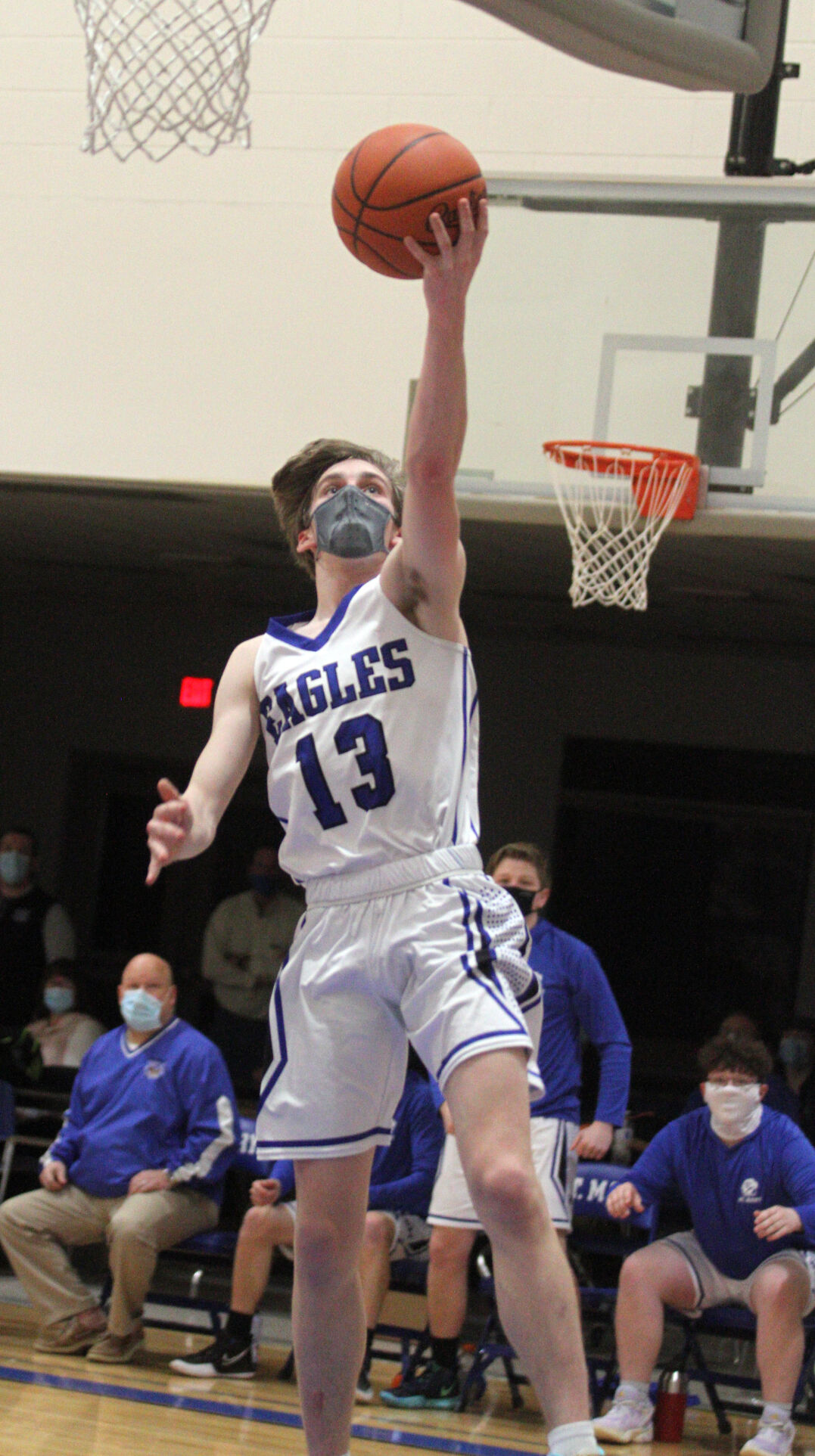 Lake Leelanau St. Mary guard Dylan Barnowski (13) glides in a for a layup Friday against Frankfort.

Lake Leelanau St. Mary guard Dylan Barnowski (13) glides in a for a layup Friday against Frankfort.

Barnowski and his Lake Leelanau St. Mary basketball brethren lost it for the first quarter, then certain found what they were looking for the rest of the way in a 49-44 nonconference home win over Frankfort.

It’s the first time the Eagles beat the Panthers in basketball in well over a decade, a stretch that could go all the way back into the 1990s. LLSM officials couldn’t name the last time it happened.

“I lose everything,” Barnowski said. “(My dad) always tells me I would lose my head if it wasn’t attached.”

The Eagles seemingly didn’t remember how to score in the first quarter, trailing Frankfort 13-2 after eight minutes.

Then LLSM’s offense turned up. Maybe someone looked in the lost and found box; maybe the Eagles (6-3) just changed up defenses.

Either way, the game turned 180 degrees from there on.

“We hated it,” said Barnowski, who scored a game-high 24 points, half of that in the fourth quarter. “Getting embarrassed like that, 13 to two at the end of the first quarter. We didn’t want that.”

Frankfort (6-5, 5-3 Northwest Conference) used a 1-4 offense early on to create wide open jumpers that led to a 7-0 lead — all from the outside.

Jack Stefanski ended with 15 points. Seven of those came in the first quarter, including the 3-pointer that put the Panthers up 7-0 when the game looked like a potential blowout.

Both those changed in the second quarter. Lake Leelanau switched from man-to-man defense to a 1-2-2 zone to combat Frankfort’s motion offense.

Suddenly, the offense was found again.

“Oh geez, he’s probably got some stuff in there right now,” LLSM head coach Matt Barnowski joked of the school’s lost-and-found box. “I’m just glad he’s got his jersey and his shoes.”

Shawn Bramer scored eight of the Eagles’ 20 second-quarter points, including a fast break layup with 39 seconds left that gave Lake Leelanau its first lead at 22-21. That was short-lived, as Blake Miller countered with a drive to take a 23-22 Panthers lead into halftime.

“The first quarter was rough,” Dylan Barnowski said. “We started out slow. They came out in a really tough defense, but we just needed some momentum. As soon as we started scoring, we just kept rolling.”

Then the fourth quarter belonged to Dylan Barnowski.

He scored the Eagles’ first 12 points of the fourth. The team’s only other offense came on free throws by Bramer and August Schaub in the final minute.

“That’s one thing with these kids, they never count themselves out of the game, which is great,” Matt Barnowski said.

“They throttled us on the boards,” Matt Barnowski said. “Rebounding definitely won us this game. They were thumping us with with rebounds in that first half and we just had to man up.”

Matthew Kohler grabbed a career-high 12 boards to lead the Eagles. Bramer hauled in seven. Schaub added five, but four of those came on the offensive glass.

Bramer scored 18 points, including 17 of the team’s 35 through three quarters. St. Mary used only one sub, playing Luke LaCross for a few minutes here and there, but otherwise playing the same five players all game long.

“Coming off two losses in a row, it was just big,” Bramer said of the win. “It helped us gain momentum.”

Last season’s 65-60 Frankfort home win came in the first meeting between the two schools since the 2011 season opener. Frankfort won all four meetings since 2009. The Michigan High School Athletic Association’s game-by-game basketball records only go back to 2009, but the Eagles did beat Frankfort in districts in the 1990s.

The two could meet again if they both get to the Division 4 regional finals in Buckley.

“We finally came out of the gate like we want to,” Frankfort head coach Dan Loney said. “I tell my guys, ‘No highs, no lows.’ Basketball is a game of runs, so you know we’re gonna make a run and we did in the beginning. And that’s a really good team and we know they’re gonna make a run. We expected a game just like this. Obviously, we want to be on the other side of it, but there was improvement. And then, at times we defaulted back to things that have been costing us games. Those are the things that we’re gonna have to work on.”

, so we can make the deep playoff run that we want to make.”

The Eagles could be favorites in almost every game remaining on their schedule. The Panthers still have a good many challenges ahead of them, including matchups with NWC contenders in Leland, Kingsley, Benzie Central and Suttons Bay, plus Gaylord St. Mary.

“We love these tough, tough games,” Loney said of playing Lake Leelanau. “It’s a possible regional matchup. So this is a game we wanted on the schedule. We look forward to and we knew it would be this type of game. That’s why we schedule it.”

The Get Around Ep. 67 — Will Newbold & Jack Stefanski, Frankfort

BUCKLEY — Leland's Gavin Miller had his mind set on one thing Saturday.

LAKE LEELANAU — When the national anthem wouldn’t play more than a few notes on his phone, L…

Decker: 'I gave all I had. What I kept is lost forever'