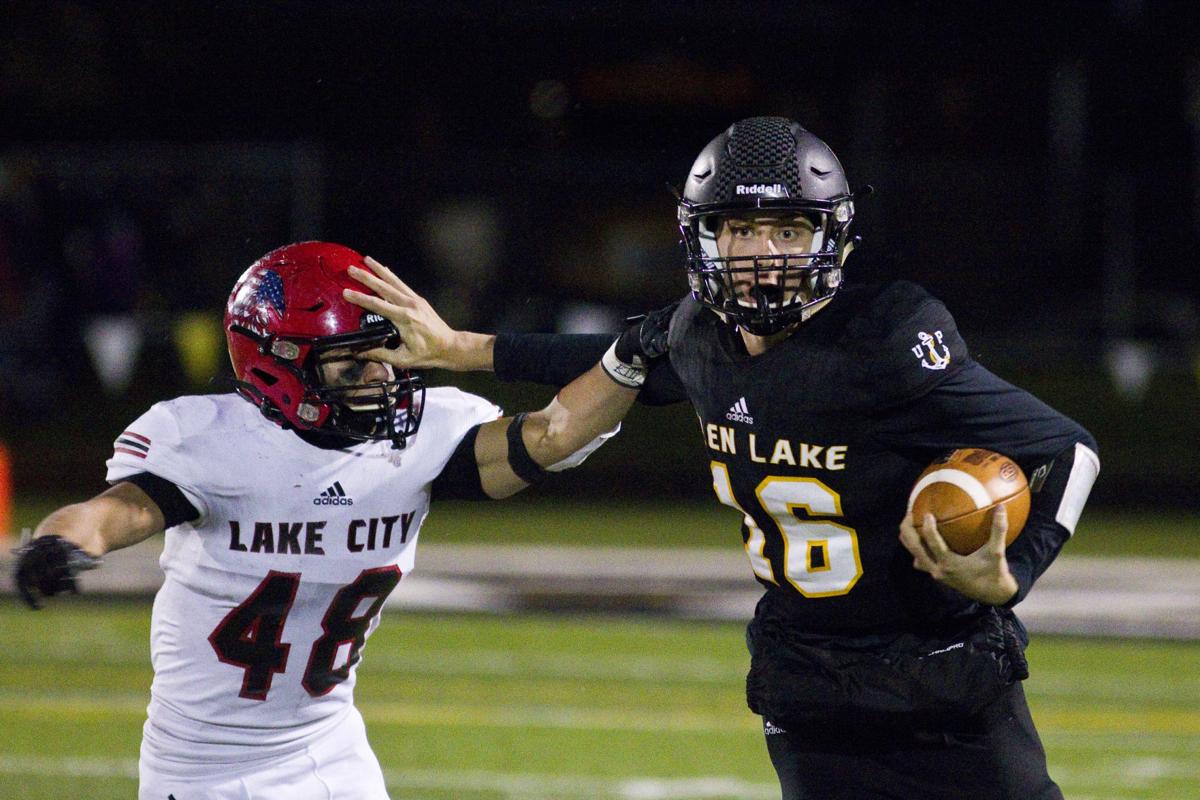 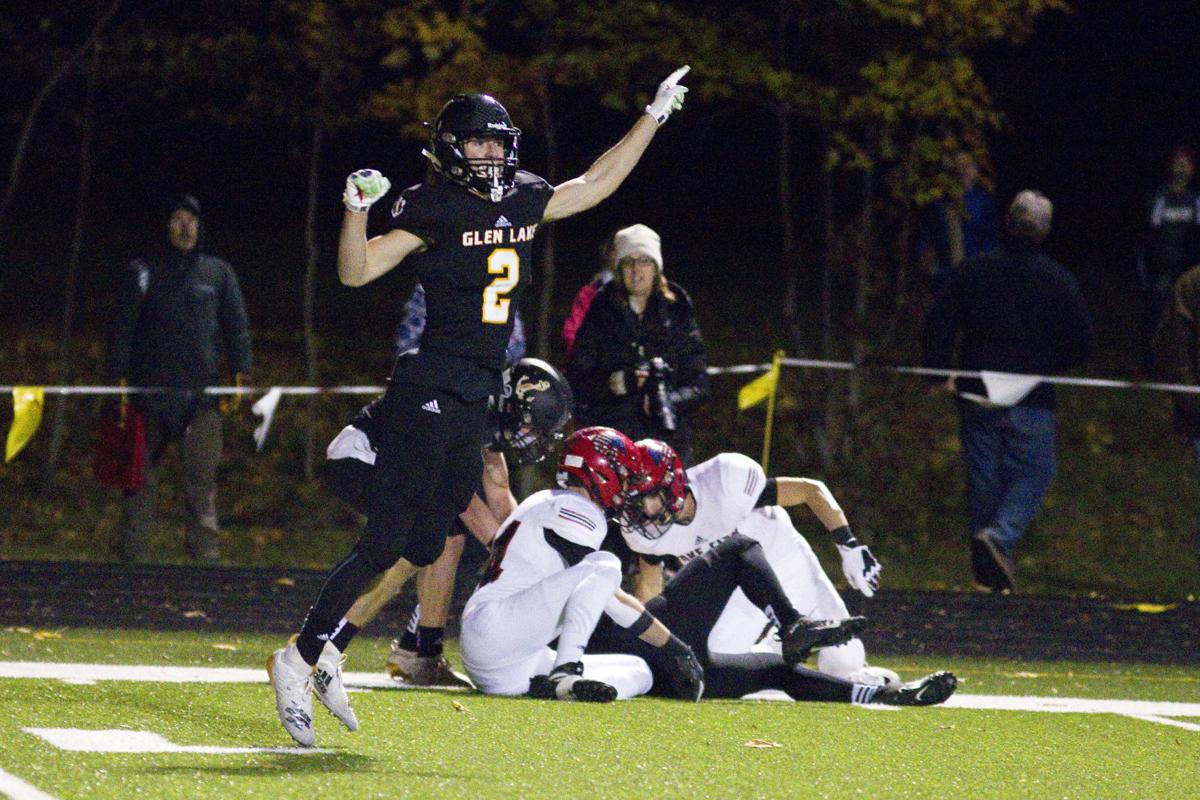 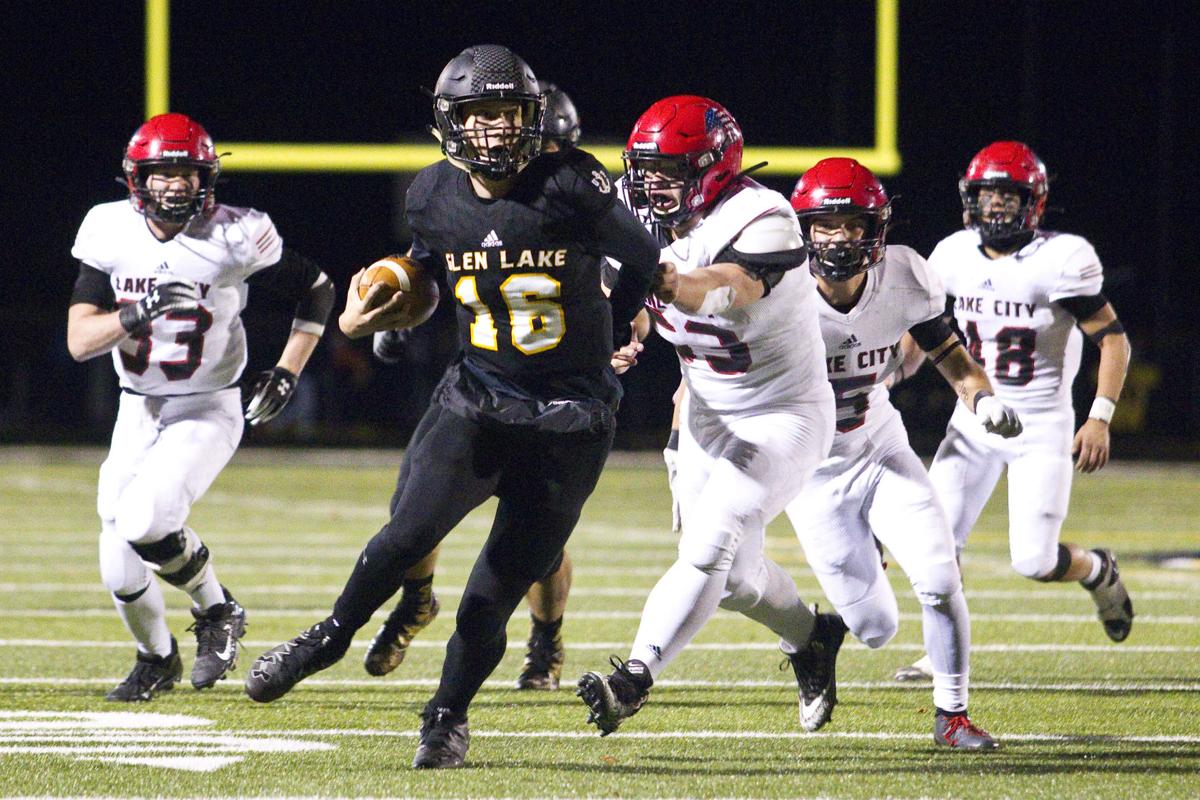 Glen Lake quarterback Reece Hazelton (16) runs past a group of Lake City defenders in the second quarter of a district semifinal.

Glen Lake quarterback Reece Hazelton (16) runs past a group of Lake City defenders in the second quarter of a district semifinal.

Some remember cheering in the sprawling stands of Ford Field, while some recall helping on the sidelines but all of them remember the 26-14 defeat at the hands of Jackson Lumen Christi.

The 2019 Lakers are looking back to that experience, coaches and players alike, to prepare them for the Division 6 state title game against Monroe St. Mary Catholic Central (11-1) Friday at 4:30 p.m. on the Detroit Lions’ home turf.

“Experience always takes over,” Lakers head coach Jerry Angers said. “We didn’t have any headsets last time and we spent the whole first quarter figuring it out. We now have binoculars in the high press box for spotters. Even the kids walking the tunnel for the first time, we talk to them about all of that.

“This time, we have to make sure that we don’t let it overwhelm us. We have to realize we are still on a 100-yard field with two goal posts in the center of two end zones.”

The Lakers earned their shot at the title through a grueling postseason run — one that has included three one-score contests and a 1-point overtime victory in the semifinal over Montague.

Just like their 2016 postseason run, the Lakers went through Calumet, defeating the Copper Kings 15-14 in the regional final two weeks ago. Glen Lake made a 14-point comeback to force overtime with Montague in the semifinal and capitalized on a missed PAT by the Wildcats to win 31-30 to stamp their ticket to the championship.

“I think the seniors already have somewhat of an experience at Ford Field. It gives us an idea of what we need to do mentally to be prepared,” senior quarterback Reece Hazelton said. “I think everyone is in pretty high spirits after last week’s comeback. A lot of the guys are really determined to end the season on a really high note. We don’t want to be content with just getting there. We want to win it.”

Hazleton said he has called several of the Laker alumni who played on the indoor, artificial turf surface in 2016 for advice on the difference between playing outdoors and at an NFL stadium.

Angers learned from his team’s previous venture downstate in November and is taking a page out of Lumen Christi’s playbook, who practiced indoors five times, ahead of this year’s title game with the Falcons.

The Lakers head to Saginaw Valley State University — where Angers’ son, Duke, plays linebacker — Wednesday to get two practices under their belts indoors. Luckily, the Lakers were fortunate enough to have a practice at Northern Michigan University’s Superior Dome ahead of their game with Calumet, only adding to the comfortability. Glen Lake only had one indoor practice prior to their 2016 game.

The Lakers are happy to get the extra practice in as zero players on the current roster have played a single game indoors.

“The air is so different than what we have been practicing outside in all the time,” Jerry Angers said of the controlled environment. “For them to play in perfect conditions, it will be interesting and fun to watch. We haven’t had that. It will be fun to see how our offense reacts to a dry surface and fast field.”

The Lakers offense is averaging nearly 34 points per game, but haven’t had the perfect conditions to air the ball out like they want to since the weather turned south.

“With they way they align, we are pretty excited to see what we can do in the passing game,” Hazelton said. “I think being able to throw and run the ball effectively starts with our offensive line. They are our anchor. Without them we couldn’t do what we could do.”

The Falcons are a run-heavy team and Angers said he’s prepping his defense to deal with that pressure, while staying alert for big plays in the passing game. Angers said the Falcons don’t pass often, but when they do, they catch you off-guard and make a huge chunk play.

Angers hopes the Lakers can shut down the Falcon run game and force them into uncomfortable situations where they have to throw the ball.

The Lakers defense has plenty of close-game experience to fall back on from this season and this postseason in particular. Glen Lake held Calumet scoreless in the second half of their 15-14 win, stopping the Copper Kings cold on 4th-and-1 on three separate occasions.

“When adversity arises or something negative happens our kids can look back at the adversity we had against Calumet or Montague,” Angers said. “Our kids believe that no matter what they can win a football game. You can’t really coach that.”

Glen Lake is dealing with a shortened week, playing on six days rest and having the normal routine derailed by travel. However, Angers said his team is used to this and will fall back on the early-season experience of short weeks to remember how to prepare their minds and to get their bodies ready for battle.

Angers told his team to enjoy the experience. To take photos and live in the moment.

But he also told his team once they head down the tunnel toward the locker room, it’s all business.

All Angers needs his team to do is finish.