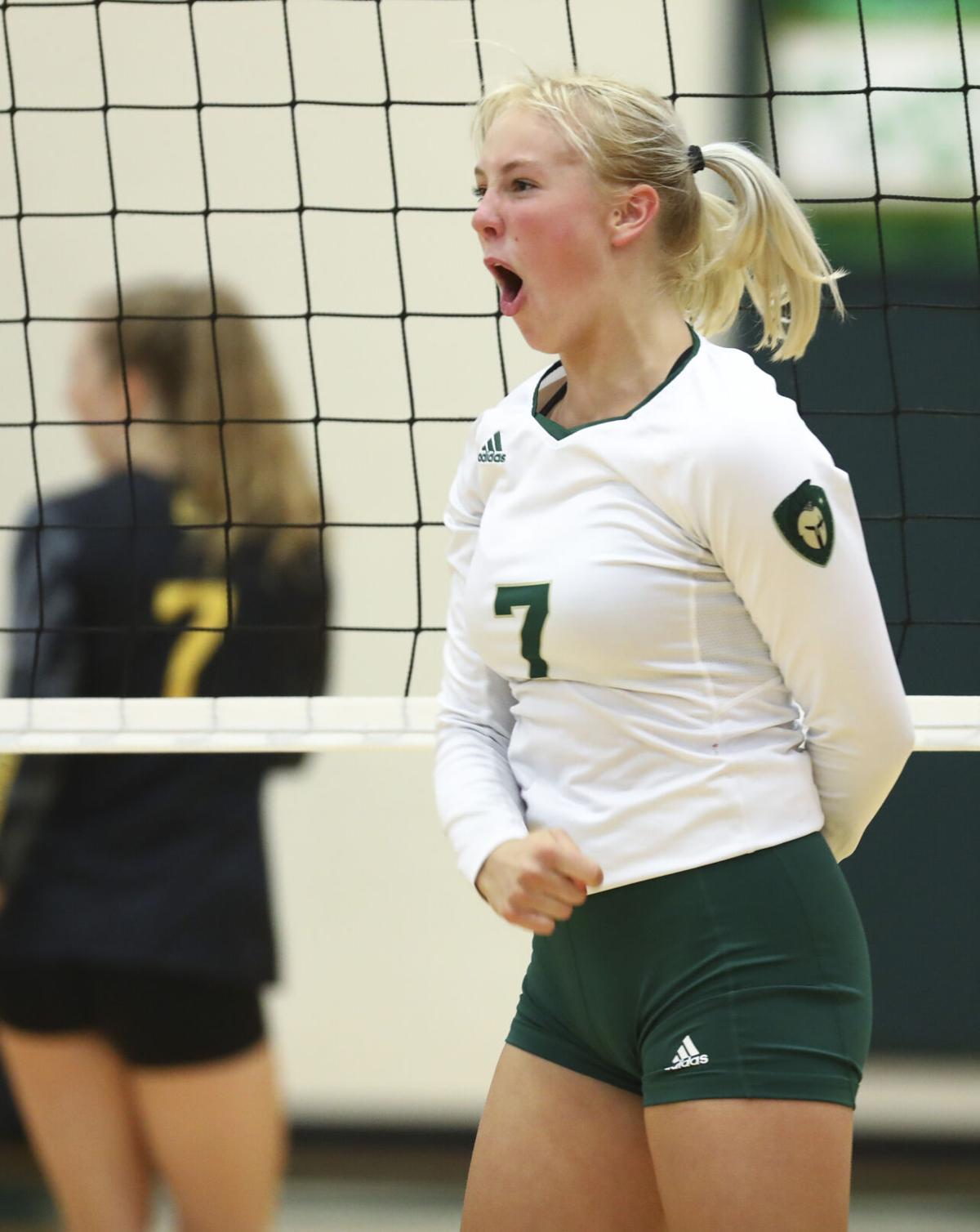 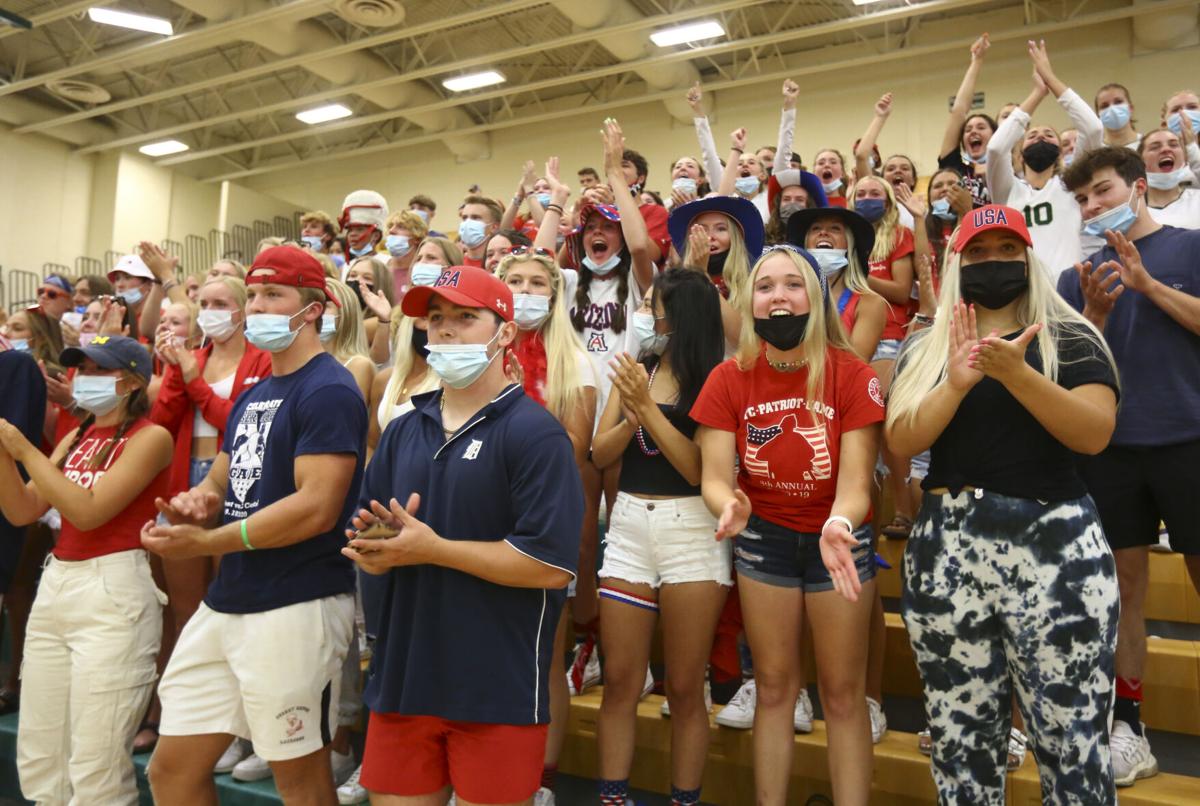 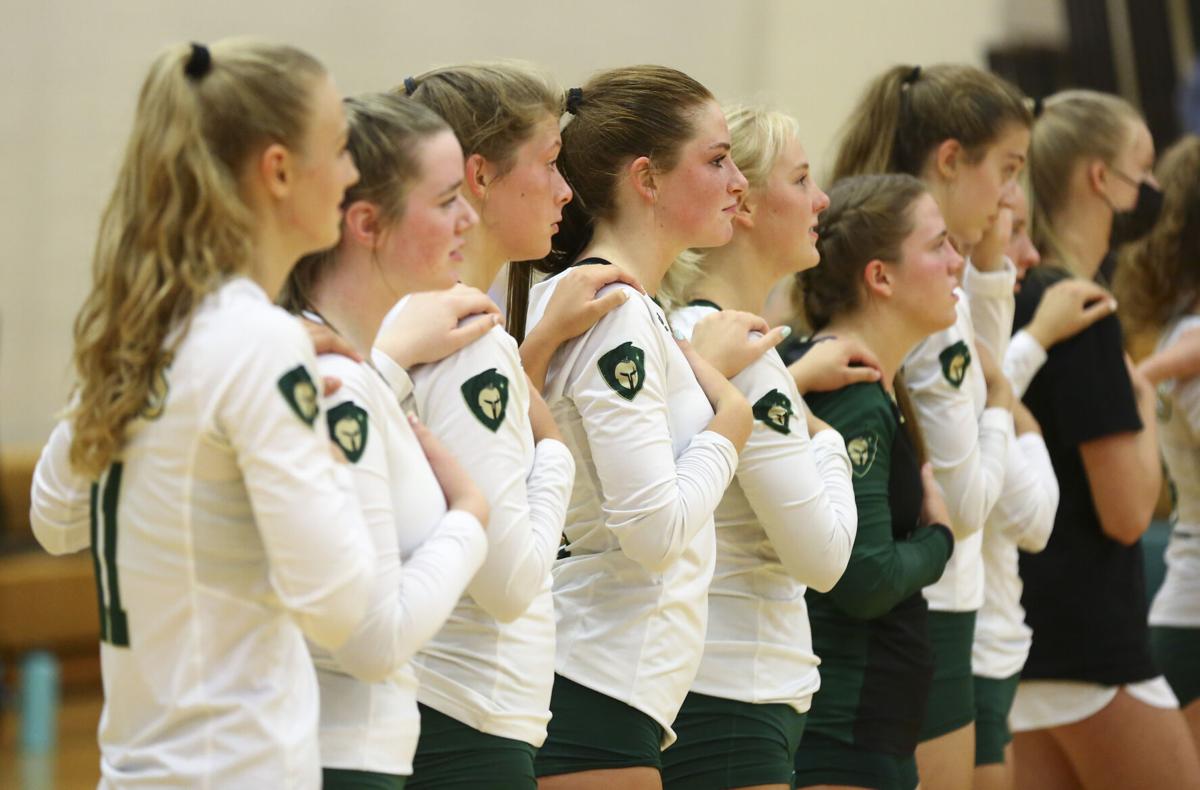 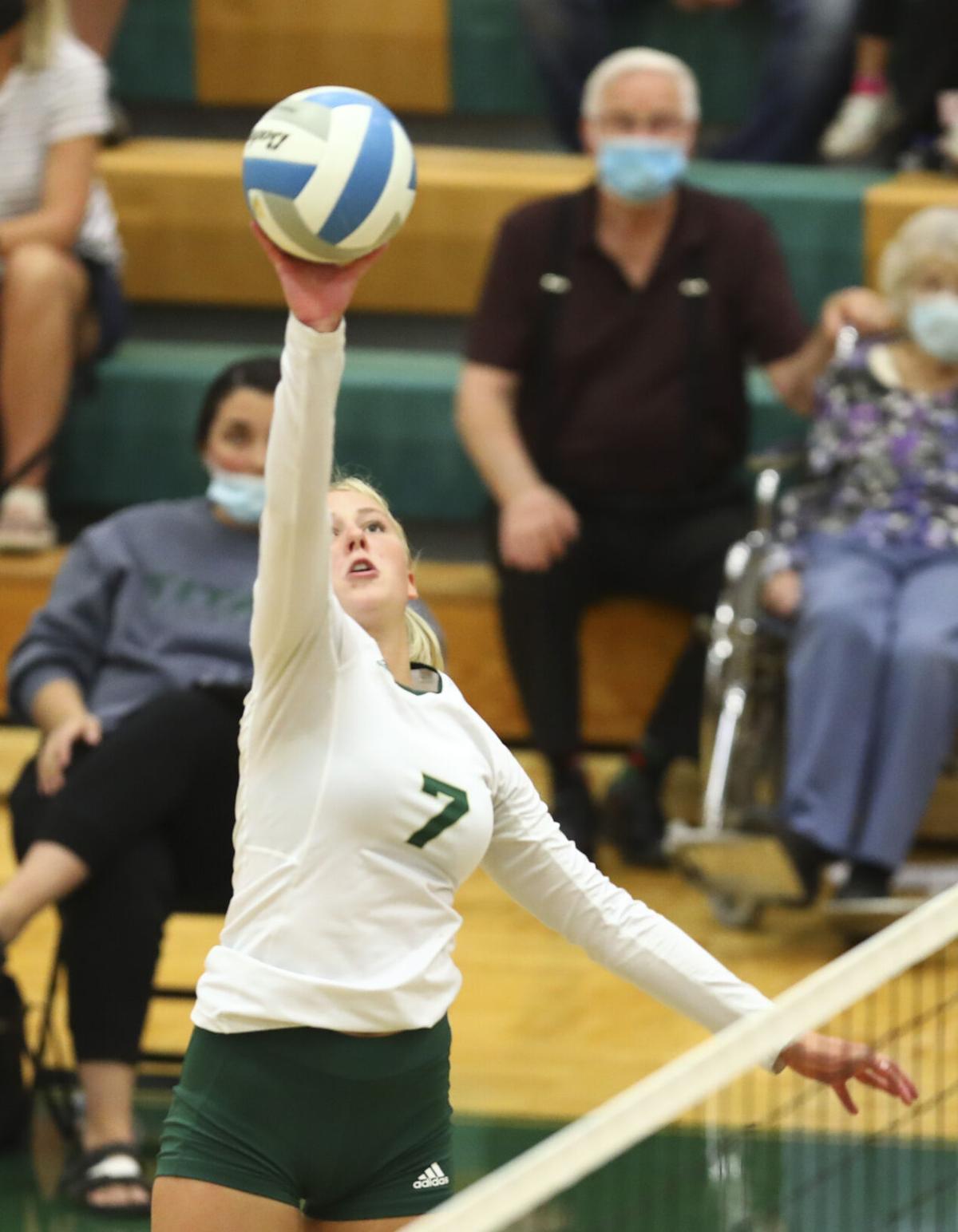 Sometimes it’s even hard for her teammates to avoid them.

Lane emphatically punched her fist in the air over and over again after hitting a roll shot to give Traverse City West a 3-1 Big North Conference opening win over a rival Traverse City Central on Wednesday.

On more than one occasion, Lane’s exuberance after a kill connected with one of her teammates.

Lane led West with 21 kills, adding three blocks, an ace and nine digs. Each of those kills, blocks and the ace were followed with flamboyant celebrations.

Sometimes the TC West huddle looks like Lane's own mosh pit, with the senior outside hitter flailing around with fists pumping and jumping up and down.

"I have a problem of fist bumping when I come into the huddle," Lane said, "and it just is so easy to punch someone."

So does she expend more energy on the frantic post-point revelry?

"Well, I have to have about equal amount of energy in both, because that fuels the next play," Lane said. "I think just having that celebration makes me crank it get a little bit more."

Central took the first game 25-19, letting the Titans know they were in for a long evening.

Trojans freshman Elyse Heffner and senior Kailey Parks did much of the damage, with sophomore Phoebe Humphrey lending some added punch to the Central side. Parks added her own excited point celebrations to counter Lane's, throwing down 22 kills. Heffner added eight kills, a block and two digs as the 6-foot freshman joined a fellow 6-footer in Humphrey in throwing up a big block against the Titans.

"She's going to have a good career for sure, so she's come on strong as the season goes on I look forward to seeing her at the end October and November time," Central coach Jen Wright said. "That'll be a lot of fun. She's been strong for us starting out."

Parks' kill from the back row gave Central a 22-17 lead as the Trojans' lead nearly slipped away before a 6-2 run to close out the first. West also missed its first four serves of the game.

"We questioned ourselves," West coach Emily Baumann said. "You could see that they weren't completely flowing well together and then it clicked in the second game. Then they started playing really well together, communicating, getting intense, getting excited about just even the small things."

The Titans took the second set 25-16, closing it out on a kill by sophomore middle blocker Avery Lahti, who finished with four kills and five blocks. Her back-to-back tips over a double block put the Titans in control 22-13.

"Avery out of the middle did an awesome job, throwing up a big block," Baumann said. "She got a few stuff blocks and got really excited, so it was awesome to see that."

Central led 15-8 in the fourth before two Lane kills and an ace on top of that started a run. They'd end up tied at 21 before a Lane kill, Sara Schermerhorn ace, Madison Neu block and Lane's match-sealing roll shot.

"It was really intense and a little closer than we wanted it, but it was definitely really fun," Ebling said. "(Central is) definitely really, really scrappy and it was hard to get things down on them. They also had a big block, so that was hard. We had to adjust. We definitely have been competing for a long time, so we push each other to do better. So we get pretty hype during these games."

Aside from the quality play on the court, the coaches and players noticed what was happening off of it for the first time in a long time. Student sections returned, and both sides of town brought loud throngs of masked-up fans, especially the home Titans, who had a couch placed behind the referee at mid court among a crowd of screaming students.

"It's always a fun match it was really cool to have student sections again," Wright said. That was a good feeling. My sophomore were talking and asked a bunch of questions about it, and then I realized that they haven't experienced a student section as a high school student."

Ally Jo McKenna led West with 28 digs, including one in the second game from the back wall after it hit a ceiling girder. Ebling added 16, Schermerhorn 11 and Neu six. Alaina Mikowski chipped in five kills and three blocks, and Schermerhorn logged 41 assist.

Kate McCrary put up 10 kills and 15 digs for Central, while Park added 14 digs and two blocks to her game-high 22 kills. Lauren Richmond dished out 30 assists and Sophie Hagerty 17, while Natalie Bourdo paced the Trojans in digs with 35. Hagerty added 13 digs and Humphrey contributed six kills, two blocks and six digs.

"I think we just came out confident," Wright said. "I think confidence is a big thing for us in staying positive on the floor and internally. When we stay confident and we're flowing, we do really good things. When we're playing relaxed and loose, that's when we're at our best."