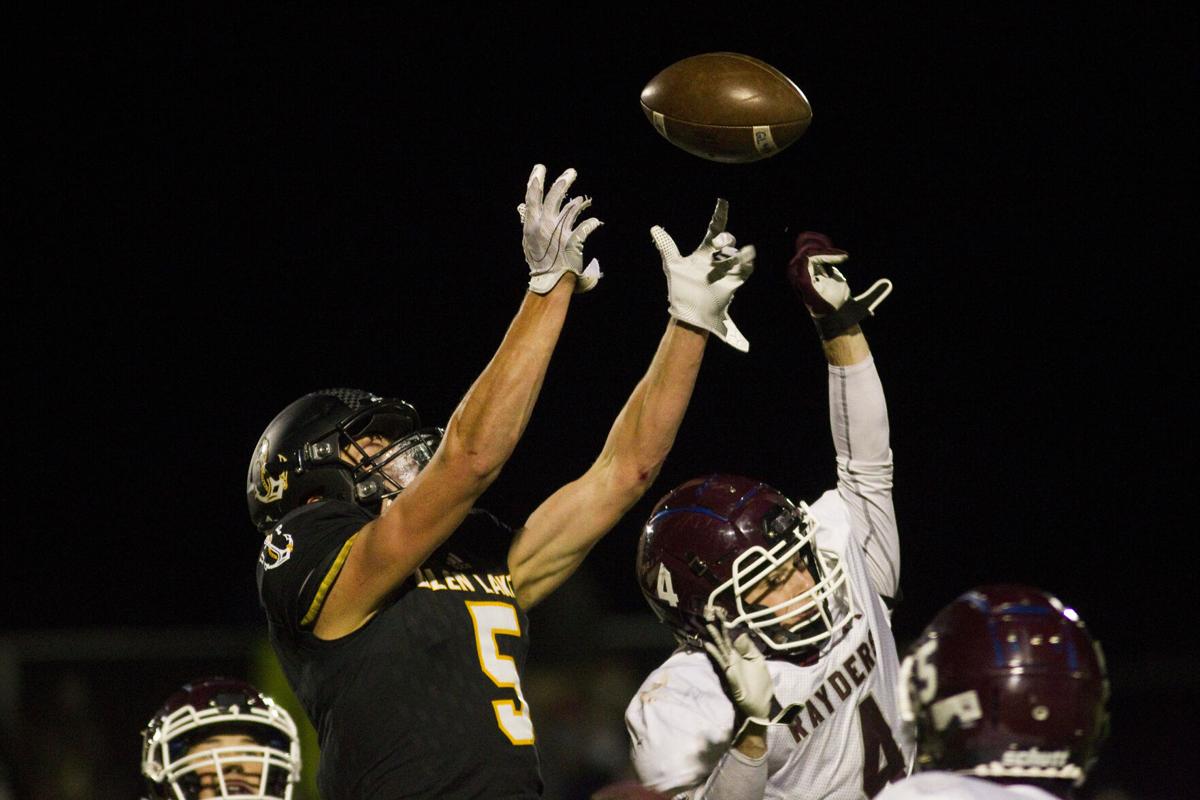 Charlevoix’s Phillip Sterrett (4) breaks up a pass to Glen Lake’s Finn Hogan (5) during a game this season. The ball bounced off another Lakers player and was caught by Hogan. 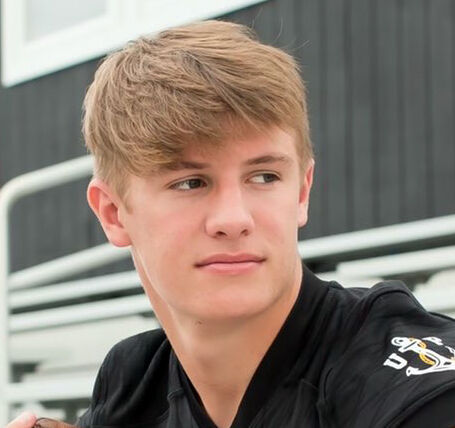 GLEN LAKE — Finn Hogan never missed a workout for the Glen Lake football program last year, even in the middle of a pandemic.

The senior wide receiver is known by his coach for the work put in behind the scenes to better himself, so its no surprise it was noticed at the next level.

Hogan gave his verbal commitment to continue his football career at Central Michigan University this week and will put pen to paper on national signing day in February to make it official. He chose the Chippewas over rival Western Michigan University.

“Growing up as a kid I’ve always wanted to play at that level, play on TV and do those kind of things,” said Hogan of joining a Division 1 program. “I feel like when the opportunity comes you just have to jump on in and take a risk on yourself.”

Hogan denied several scholarship offers from Division 2 schools to take the preferred walk-on spot offered by the Chippewas. He said he’s betting on himself to earn a spot on the field, and hopefully a scholarship.

The three-sport athlete first drew notice from CMU during his junior season during a playoff run that ended with the Lakers playing for a state title at Ford Field. Immediately following the season, he and the CMU coaching staff were in contact and had plans for camps and official visits, but like many other recruits all of that was upended by the COVID-19 pandemic. Even through a year of no face-to-face contact or skill evaluations from the Chippewa’s staff, they stayed in contact and showed a lot of interest in bringing in the 6-foot-4, 210-pound pass catcher.

“You see the trend with a lot of receivers nowadays is big, tall, fast, jumps high and runs crisp routes and Finn fits all those check marks,” Lakers head coach Nate Sneed said. “CMU is getting a good culture kid who is going to bust his tail no matter what he is asked.”

Hogan said he’ll most likely get a redshirt for his first year with the team, giving him time to mold himself into someone who will see the playing time he wants. The senior will be 17 until July, giving him the extra time to earn a spot on the field.

He said he could see himself being moved from wide receiver into the tight end position because of his size and ability to put on more weight without losing his speed or his pass catching ability.

“It all depends on how camps go to see if wide receiver works or if they want to move me into tight end,“ he said. “I’m tall and can put on weight if that’s what ends up happening. Whatever is going to get me out of the field I am down for.”

Sneed agreed that Hogan will succeed at either position because of the work he puts in off of the field.

“His family has always pushed him to be the best he can whether it be in the classroom, the basketball court, the football field, the track or the weight room,” said Sneed. “He’s got that internal drive that separates himself from the rest of the pack.

“It’s built in the weight room and in the gym. He’s been all about is putting in those invisible hours.”

Hogan said the Glen Lake culture made it easy for him to see the path to playing college sports. Former Lakers head coach Jerry Angers sent dozens of his players to play college football and started instilling the mindset that Hogan could be one of them from day one.

“Coach Angers brought like 70 kids into college football ... so he knows exactly what’s going to be coming at you, the work ethic needed and what you need to be prepared for,” Hogan said. “I feel like the people around me who are supporting me have really helped me with this whole situation.”

The senior is still unsure of what he will be studying, but noted physical therapy and finance as possible choices. The big-school atmosphere and game-day experiences drew Hogan to Mt. Pleasant, a far cry from the small community at Glen Lake.

“I couldn’t ask for a better school to grow up in and people to support me,” Hogan said. “I would definitely not be here right now if it wasn’t for those people so it’s a big thank you to those guys.”

Inside Voice: Glads practice inside Grand Traverse Resort to prep for finals

ACME — Charlie Peterson doesn’t need an excuse to dial it up a little in practice.

DETROIT — If only it counted that way.

You’ve probably heard it time and time again, especially when the latter stages of the football season come around.

Cook: Not knowing why is the worst part

TRAVERSE CITY — Groups are pushing back on the most recent delays of the winter sports season calendar.