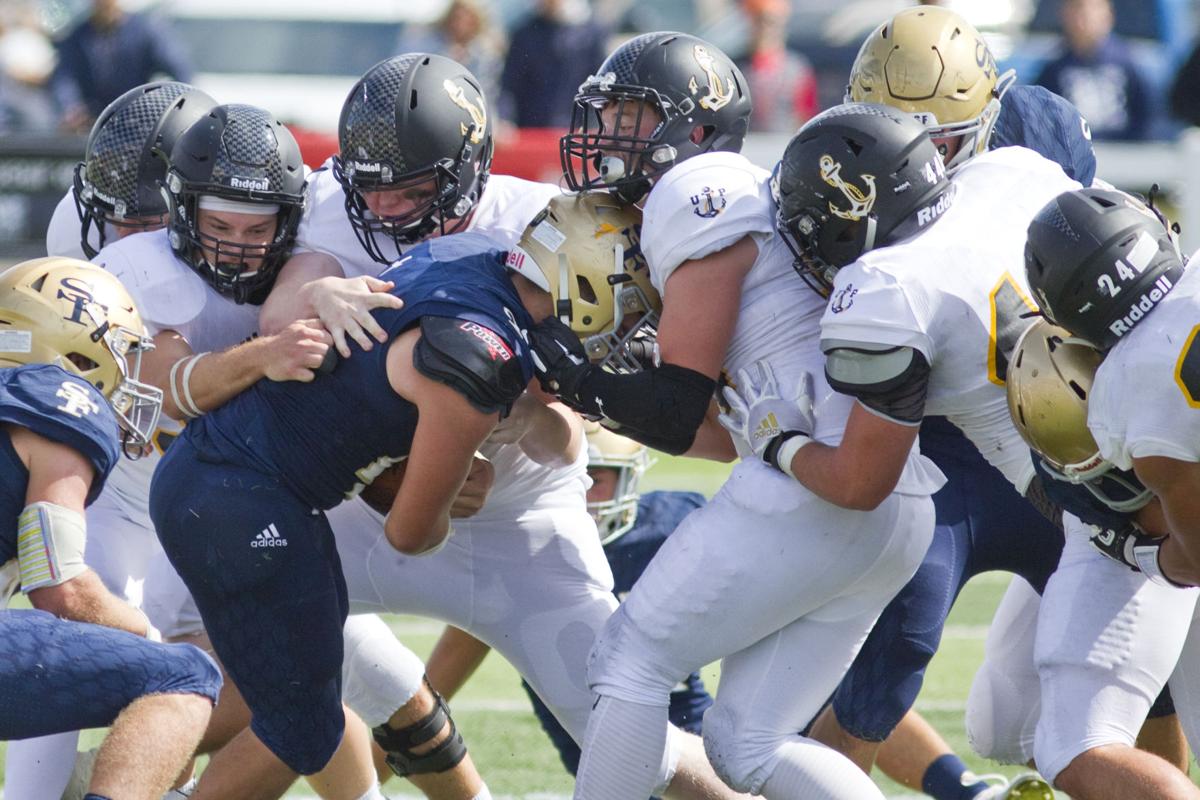 Traverse City St. Francis running back Aidan Schmuckal (41) gets stopped by a gang of Glen Lake defenders in the third quarter of Saturday’s game at Thirlby Field. 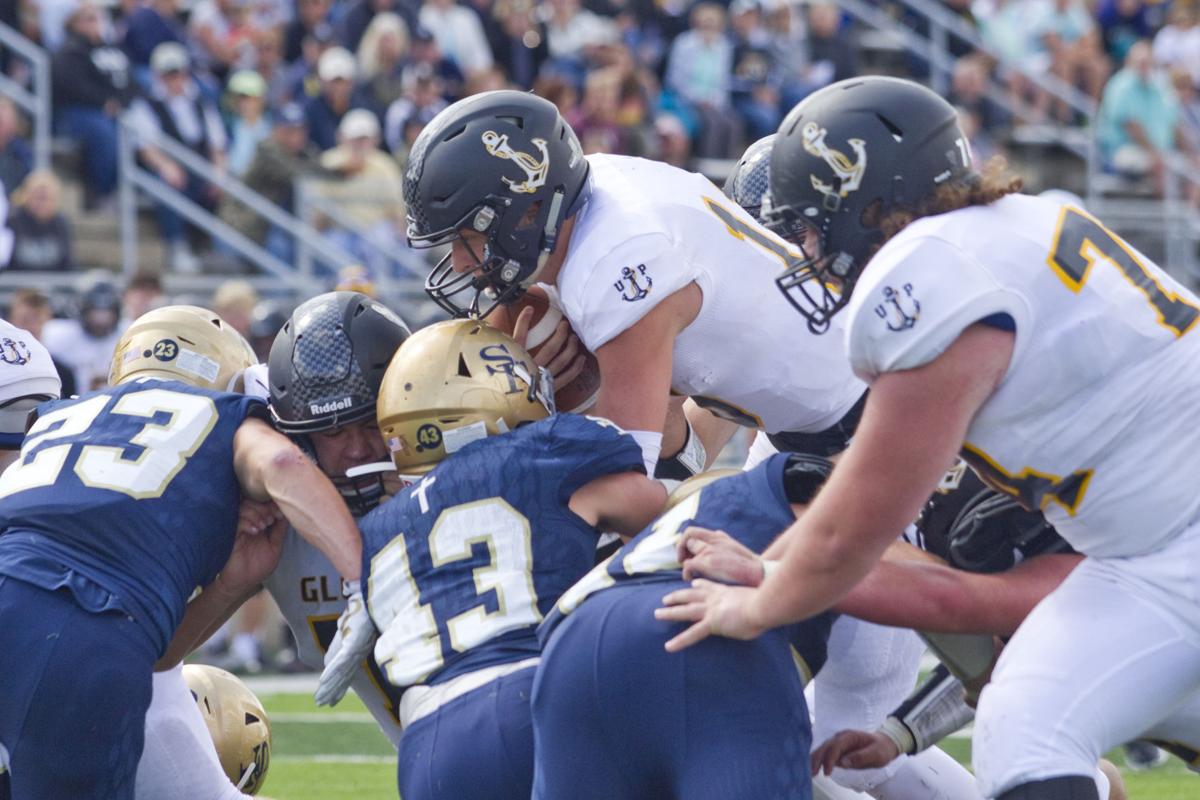 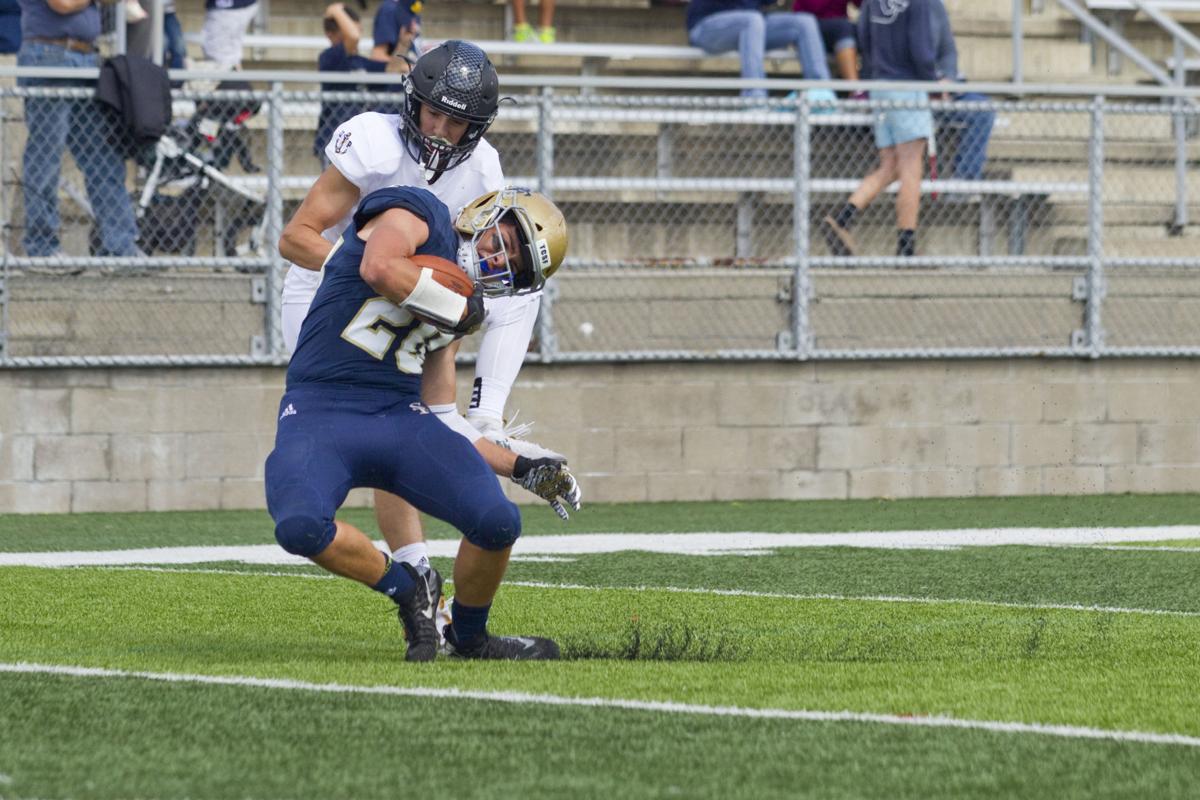 Traverse City St. Francis running back Gabe Oliver (20) scores with Glen Lake cornerback CJ Helfrich (2) on his back in the second quarter of Saturday’s game at Thirlby Field.

Traverse City St. Francis running back Aidan Schmuckal (41) gets stopped by a gang of Glen Lake defenders in the third quarter of Saturday’s game at Thirlby Field.

Traverse City St. Francis running back Gabe Oliver (20) scores with Glen Lake cornerback CJ Helfrich (2) on his back in the second quarter of Saturday’s game at Thirlby Field.

Glen Lake (2-0) beat Traverse City St. Francis (1-1) for the first time since 2012 with a convincing 28-7 win Saturday afternoon at Thirlby Field, displaying the size, physical play and diverse attack that made the Lakers a football team many focused on heading into the season.

“Donovan Boots said it best after the game,” Lakers head coach Jerry Angers said. “He’s crying on the sidelines. He said, ‘Coach, I’ve been working my tail off for 10 months for this. This feels so good.’ And that’s just a senior leader.”

The 270-pound senior lineman, at time triple-teams by St. Francis blockers, was one of many Glen Lake linemen who impacted the game as the Lakers imposed their will in the trenches, averaging 4.7 yards a carry and scoring two touchdowns through the air.

“Look up to that scoreboard,” Glen Lake running back Jonathan Wright said, admiring the Thirlby Field scoreboard still displaying the final score. “See those numbers on there? It’s like it feels like we’re on top of the world. But you know, we have to keep a level head. Stay smart, be safe, celebrate for 24 hours and then move on to next week.”

The Lakers (2-0) host Mancelona next week, while St. Francis plays its third straight home game of the season, with Benzie Central visiting Saturday.

But on this Saturday, Glen Lake accomplished a myriad of goals.

The Lakers not only improved to 2-0, posting victories against two traditional powerhouse programs in Millington and St. Francis, but scored their most points against the Gladiators since a 37-0 playoff win in 2001 and surrendered the fewest against TCSF since a 7-6 regular-season win in 2001. It’s Glen Lake’s first 2-0 start since 2015.

“It’s a big momentum swing for the year,” senior quarterback Reece Hazelton said. “And just to start off to know where last year we were all into I think that’s just a big confidence boost for us. And to have it coming at St. Francis.”

The Gladiators had won 40 of their last 41 regular-season games and hadn’t lost at home since the 2014 season opener against New Lothrop in triple overtime.

“I feel like this is huge,” Wright said. “Last week, we had some momentum that took off and this week it just skyrockets us even farther.”

“They came up with a great game plan and executed it to a tee,” St. Francis head coach Josh Sellers said. “Any mistake we could have made we we made it. So we regressed this week compared to last week’s performance. A lot of that has to do with what the team on the other side of the field did to us. And we’ve got to learn from it.”

Part of the game plan was simple: Use their size advantage to control the trenches and wear down the Gladiators. The Laker offensive line of Garrett Tremble (230 pounds), River Dallas (190), Sam Shiflett (200), Bootz (270) and Ben Kroll (270) was without starting center Dylan Kilinski (295) and guard Sam Keys (240; he only played defense while coming back from a foot injury), but still dominated for large swaths of the game.

The Lakers punted just once, and only five of their eight possessions lasted eight or plays.

“This game was not a statement game, but just a game to show how the how we’re going to play,” Hazelton said. “We play physical and fast. Today was just one of those games where we just kind of let ourselves play and not let anything else affect us.”

Glen Lake strung together a 10-play drive to take a 15-7 lead on Wright’s 1-yard TD plunge and a 2-point conversion from Wright as well.

Hazelton hit Finn Hogan in stride, and Hogan outjumped the defense to snare a 33-yard touchdown pass for the game’s first score. Brady McDonough’s extra point made it 7-0 on the first play of the second quarter.

“We went in knowing that they were there were a lot bigger than us. Definitely,” St. Francis senior linebacker Andy Simaz said. “We weren’t expecting them to be as physical or I we were expecting them to be very physical but we thought we could just our physical them. But our effort was just not there.”

St. Francis responded to that score with a six-play, 74-yard drive aided by two big Laker penalties — a roughing the passer call that negated a J.J. Bradford interception and a personal foul that gave the Glads a first down.

after Kroll had made a tackle that looked like it would force TCSF to punt. Sophomore Gabe Olivier shook off a Lake tackler to break free for a 30-yard touchdown.

The Lakers added a third-quarter touchdown on an 18-yard pass from Hazelton to Jackson Ciolek and a fourth-quarter score on Wright’s second 1-yard TD run.

Hazelton threw for 151 yards and ran for 80 more. Wright added 81 rush yards, Isaac Sterzer 30 and Jacob Pleva 25. Bradford picked off another pass in the fourth quarter, one that stood.

Saturday’s win was the Lakers’ fourth against TCSF in 18 meetings.

“You’re 1-7 against them and they’ve called scored 276 points and we’ve only scored 53 over our career, not that that’s been on the board all year,” Angers joked. “Our kids wanted to win for the seniors, and our seniors want to help out the past players that lost big games here. That’s one of the elite programs in the state of Michigan, and they’re going to make a run and we know that.

“I don’t really call it a rivalry. From a record standpoint, when you’re 1-7 against them, how much of a rivalry is there? Well, now we’re 2-7.”