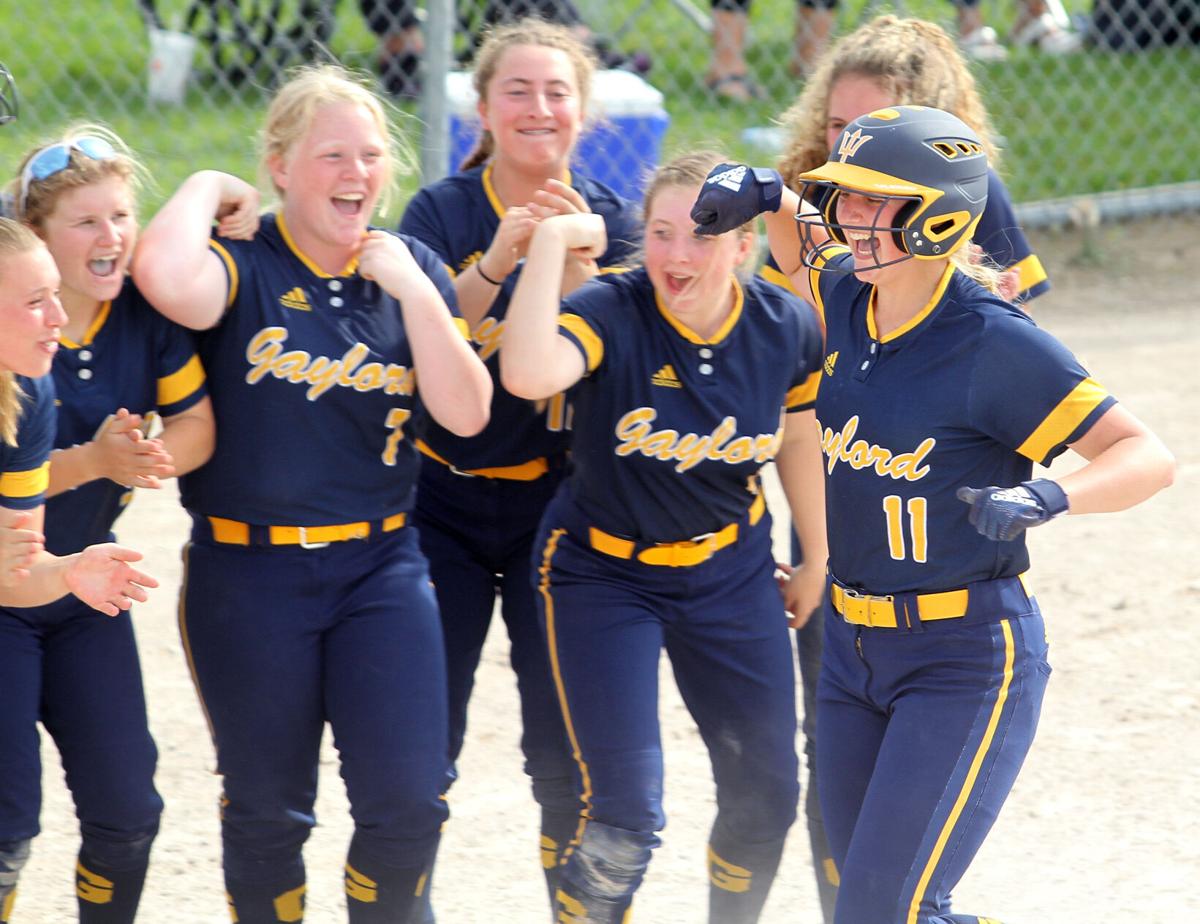 Gaylord’s Abby Radulski (11) is greeted by teammates as she trots home after a home run Thursday against Traverse City St. Francis. 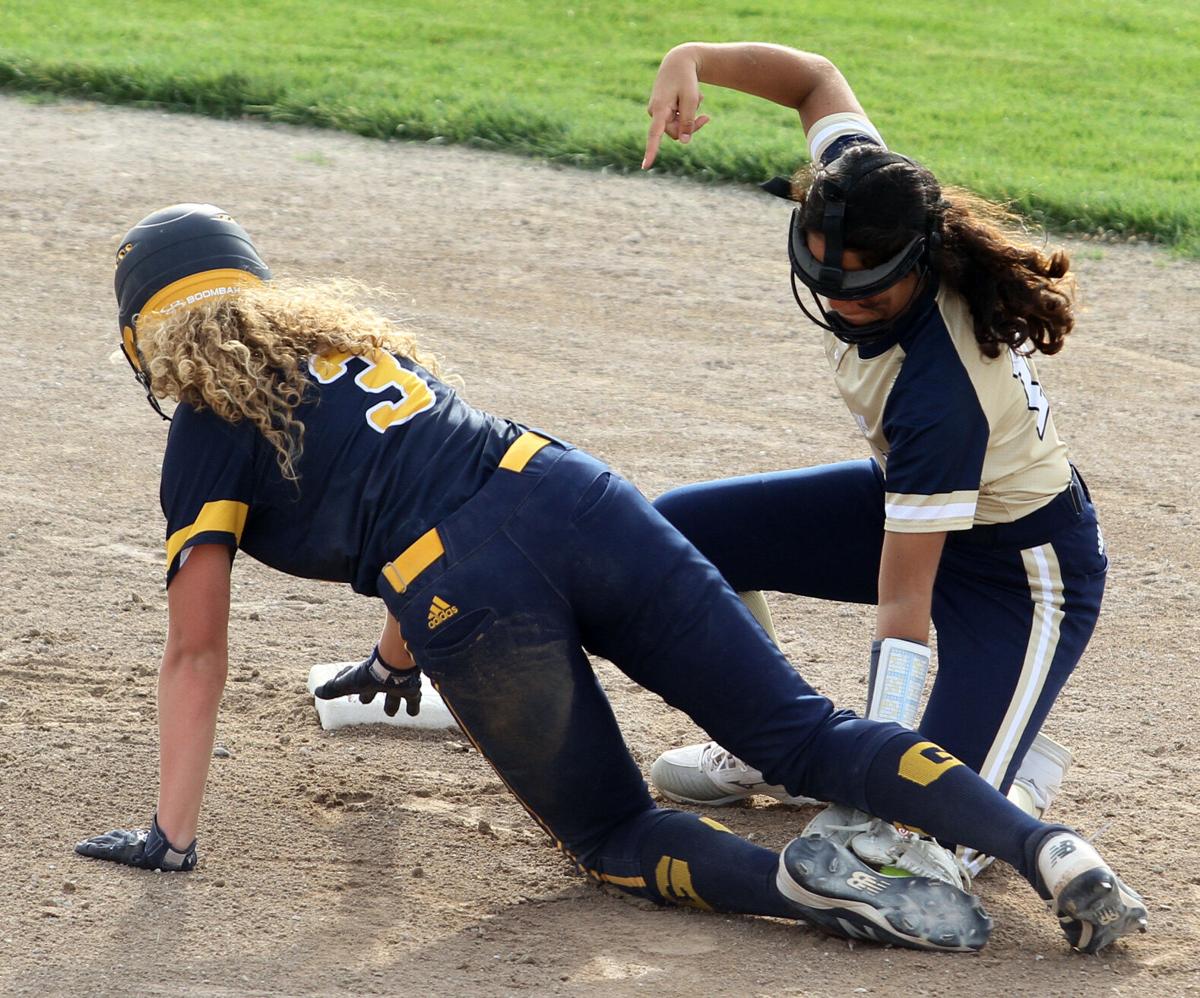 Gaylord’s Abby Radulski (11) is greeted by teammates as she trots home after a home run Thursday against Traverse City St. Francis.

Radulski pitched the Blue Devils (27-1) to the opening-game win and hit a pair of two-run home runs. Jones’ bid for a perfect game in the nightcap ended with one out to go, on a Stephanie Schichtel sharp grounder down the third-base line.

“I wasn’t trying to do too much,” Jones said. “Just trust myself and trust my defense to get outs, and that’s what we did.”

The Blue Devils came out of a week in Traverse City with a 3-1 record against St. Francis (28-4) and West (19-8-1). Gaylord and the Titans split a doubleheader Tuesday to stay tied for the Big North Conference lead.

“We’re just looking forward to playing more good competition and preparing for states,” Jones said. “That’s our goal — to win states this year — so everything we do is working towards that.”

Jones mowed down the Gladiators in the second game, after the Devils almost squandered a 7-2 lead in the first game and held on to win 10-8.

Jones struck out only three, but kept the Glads off balance and her defense did the rest, with the outfield running down numerous fly outs. Jones retired St. Francis’ first 17 batters in order before Schichtel’s infield single broke up the perfect game and no-hitter.

“She got the win and she got the team the win, so that’s all that matters,” Gaylord coach Abe Cruz said. “And that’s what these girls are all about, is playing team ball. They really look out for each other.”

Alexis Shepherd drove in four runs in the nightcap win, with Addison Wangler adding two. Braleigh Miller scored three runs on two hits and a walk and Taylor Moeggenberg doubled in a run. Jones and Avery Parker added two hits and an RBI each and Catilin Robbins scored twice and drove in a run.

The Devils broke out the offense early in the twinbill, scoring five runs in the first frame.

Radulski hit the first of her two bombs over the left-center fence in the first inning for a 5-0 lead and Gaylord led 7-2 at one point.

St. Francis rallied back to within three runs before Radulski stemmed that momentum with another two-run shot to the same section of fence. The pair of bombs are her second and third of the season, making her the third Blue Devils player with multiple home runs this season, joining Parker (seven) and Jones (nine).

“I thought that this was a good chance to bounce back from that (split with West),” Radulski said. “I think that the mentality is staying high, because we kind of got low with her energy sometimes (against West). I think just keeping our heads up high and keeping a positive mentality just kept us higher than the other team.”

Wangler drove in two runs in the 10-8 win and Shepherd, Alexis Kozlowski and Radulski each scored two runs. Radulski also picked up the win, scattering eight hits and four earned runs over six innings. She recorded a 1-2-3 fifth inning on just four pitches.

With Gaylord holding a 10-4 lead headed in St. Francis’ last at-bat, Leah Simetz led off the frame with a solo home run to dead center. Quinn Boyle was plunked, Hunter St. Peter singled and Allee Shepherd hit to left for a RBI. Schichtel reached on an error and Maggie Napont’s sacrifice fly to right drew the Glads within two with just one out.

The Blue Devils turned in a stellar 6-3-5 double play to end the game.

“I still don’t think it was a quite to our standard of excellence,” Jones said. “But I do think the second game was a lot better. I still think there’s areas to improve, but we did a good job capitalizing when we could.”

“We gave them a little bit too much in the first couple innings for sure in that first game,” St. Francis coach Phil Meeker said. “We battled back, but that’s a team that you just can’t give anything to and every time we gave them an inch, they took a mile. They’re a great team; definitely going to have a great run in D-2, for sure.”

The Gladiators’ calendar is booked in the week ahead. They host Elk Rapids on Monday and face Boyne City on Thursday in Lake Michigan Conference play, but also have games Wednesday against Traverse City Central and May 29 versus TC West.

“We put these games on the challenge the girls,” Meeker said. “We’ve talked about it before we went into the game, that we can either win and get better or we can lose and get better and today, we did a little bit of both. We didn’t win, but we had some winning opportunities so we got better as a team with them.”

St. Francis also drew Kingsley (27-6) in the opening round of districts.

TRAVERSE CITY — The hottest day of the spring season was no match for the No. 1-ranked Trave…