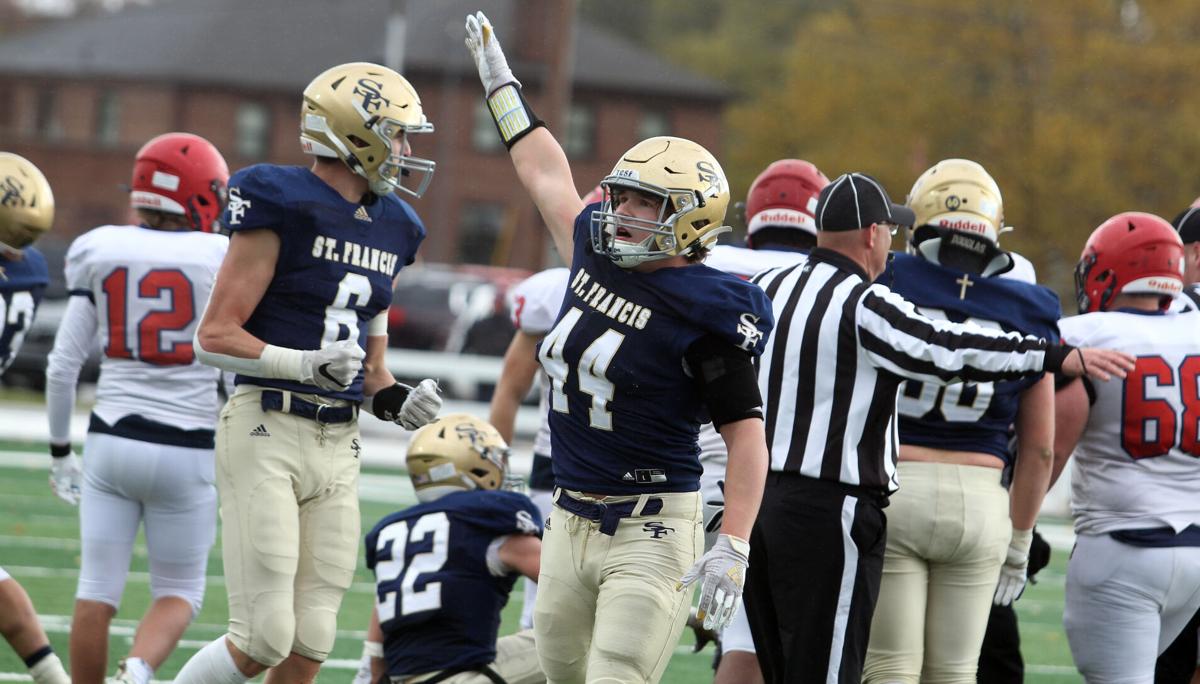 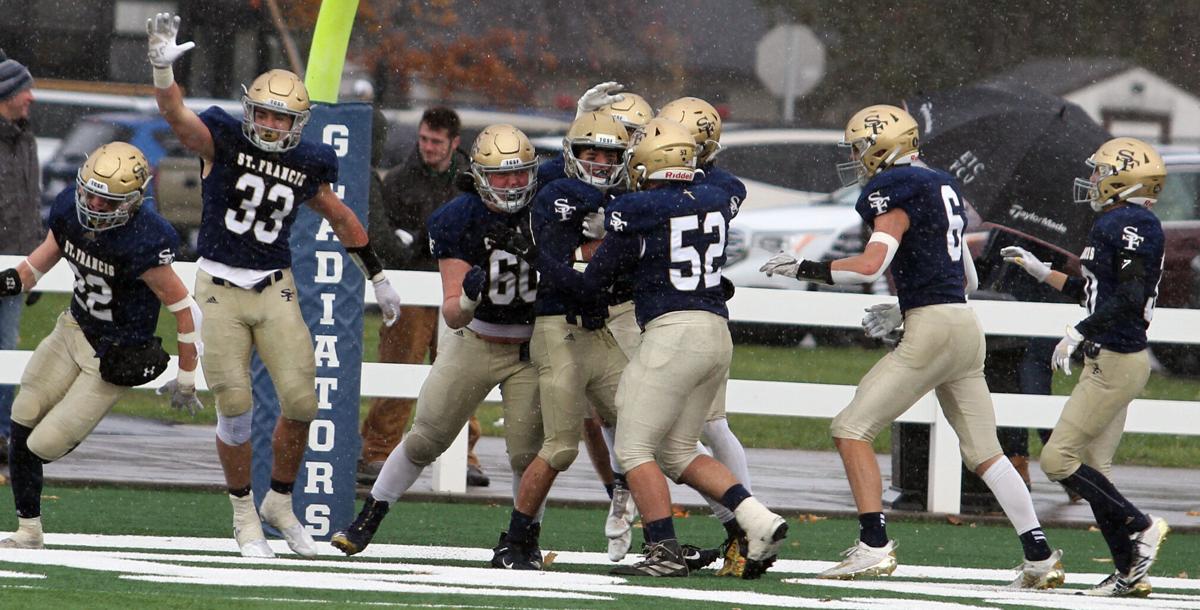 Many do it for a bond between players like a brotherhood. Traverse City St. Francis boasts legacies that make the often-used slogan more literal.

Nearly a dozen Gladiators on the 2021 football squad have fathers who played decades ago.

That’s a lot of firsthand knowledge passed down to these players about playing in big games, which the Gladiators get at 1 p.m. Saturday when they face Pewamo-Westphalia in a Division 7 state semifinal game in Cedar Springs.

“You see it on both teams, too,” said St. Francis head coach Josh Sellers, whose dad Larry coached the Glads from 1974-2002. “Anytime you have those smaller schools, you’re going to have those generational kinds of relationships. The expectations then kind of feed down at the holiday dinner table or just the dinner table from generation to generation.”

Luke and Eli Biggar not only had their dad donning the TCSF gold helmet before them, but all eight uncles and a grandfather.

Senior offensive lineman Hunter Alpers even wears the same jersey number (62) as his father Scott, who played for the Gladiators from 1974-77. Hunter’s mother Beth was a Gladiator cheerleader and played volleyball at TCSF.

Scott Alpers played for the 1974 state champion Gladiators, although that was the last year the “mythical” state title was determined by a vote of newspaper writers and sportscasters after the season and not on the field.

“He said that just dig deep and stick to your role and just think of it as just another football game,” Hunter Alpers said. “Play your heart out.”

Mark Bramer, a 1993 St. Francis grad who played on the 1992 championship team, will be watching his son Shawn play along with his Suttons Bay teammates for the eight-player football title Saturday in Marquette. But he’ll be getting updates on his alma mater from his father Tim and brother Pat, TCSF graduates in 1956 and 1996, respectively.

“Usually I get updates from my dad or brother,” said Mark Bramer, who played alongside Josh Sellers and Aaron Biggar much of his TCSF career. “God only knows, coming up to the U.P., the signal can be a little sketchy.”

On the field, the teams have things in common aside from bloodlines.

Both come into Saturday’s semifinal 12-0, with the Gladiators ranked No. 1 in the state, and Pewamo sitting at No. 2.

In the final Associated Press poll in late October, only three votes separated the two, and they drew all of the first-place votes between them.

The Pirates put up five shutouts this season to St. Francis’ four.

St. Francis comes into the game almost completely healthy, aside from missing star inside linebacker Joey Donahue, who had surgery after suffering a torn meniscus before the regular-season finale against Kingsley. He’s missed four games with the injury and still leads TCSF in tackles by 16.

“All hands on deck,” Sellers said of his mostly-healthy squad. “Week 13, it’s going to be nice to have that. It’s unusual. I’m kind of looking around going, ‘How did this happen?’ But here we are.”

Pewamo, on the other hand, battled injury adversity much of the season, losing 2019 all-state running back Tanner Wirth to a second torn ACL in as many years (this to the other knee) in Week Three, seeing quarterback Cam Cook lost for the season in Week Six with a knee injury and star receiver/linebacker Brock Thelen sustained a broken leg late in the season. Senior running back and defensive back Tanner Bengel, senior wide receiver and defensive back Connor Bengel, junior wide receiver Connor Pohl and junior lineman Cade Stump also suffered injuries this season.

”Our kids have really adapted well,” Pirates head coach Jeremy Miller said of the rash of injuries. “Our defense has been our strongpoint all year. When you look at us, our kids look like long, skinny kids, but they’re stronger than they look.”

Alpers noticed that on tape. The Gladiators will have the size advantage along the lines, but Alpers said his offensive line unit will have to deal with Pewamo’s speed.

”They’re not the biggest line, but they’re definitely one of the quicker ones, just like what we’ve seen in Kingsley,” Alpers said. “They weren’t that big, but they’re quick. We’ll need to stay on our toes.”

Division 7 features one of the most competitive fields remaining in the playoffs, with three of four remaining teams undefeated. Only Division 4 can say the same. Lawton (12-0) plays Jackson Lumen Christi (11-1) in the other D-7 semifinal.

”D-7 is just unreal. It’s crazy,” Miller said. “Division 6, Lansing Catholic is going to win that. You might as well just give them the trophy right now, and we beat them.”

Pewamo-Westphalia topped Lansing CC 12-7 in its regular-season finale. The Gladiators beat Kingsley 38-30 that week to cap off an undefeated regular season after making a trip to last year’s Division 7 finals, a 42-35 loss to New Lothrop.

“Last year, coach said that after Kingsley we wouldn’t take a backseat to anyone and unfortunately that happened in finals last year,” Alpers said. “So, I’m just taking that to heart and I’m not going to take no for an answer.”

Central's Flynn and VenHuizen, Manton's Morrow to compete in Meet of Champions

TC Central preps for the Fracassi brothers of South Lyon

TRAVERSE CITY — At this point last season, two Traverse City Tritons dove in the pool at the…

BENZONIA — Hunter Jones wants to be a national champion.

BACKGROUND: These two played only once before, in the 2016 playoffs at Thirlby Field. On a very windy day, the Pirates hit a long field goal with the wind at their backs to finish the first half, a score that would prove to be the difference in a 17-14 game. The Glads missed a late second-half field goal into the wind. The weather forecast predicts it won't be that windy this time around in Cedar Springs. Both teams like to run the ball first and pass second, but are efficient when throwing. “They're very dangerous because they can pound the ball with that T (offense), but they can also throw it with that quarterback (Charlie Peterson),” Pirates head coach Jeremy Miller said. “He can throw guys open. … They way they can do both is very dangerous.” Pewamo is coming off a 20-0 shutout of Elkton-Pigeon-Bay Port in its regional title game, while the Gladiators topped Ishpeming Westwood 48-20. Each team has played in only one game this season decided by one score or less. “They play very fast on both sides of the ball,” St. Francis head coach Josh Sellers said of the Pirates. “Especially defense, they're very aggressive to the ball. They've only given up less than 100 points all season. So we're going to have to execute offensively like we have all year. Offensively, they run a bunch of different stuff at you formationally in motion to try and get you moving around. But they want to run the ball first and foremost.”

BRACKET BITS: The winner plays either Lawton (12-0) or Jackson Lumen Christi (11-1) in the Nov. 27 state championship game at Ford Field in Detroit.