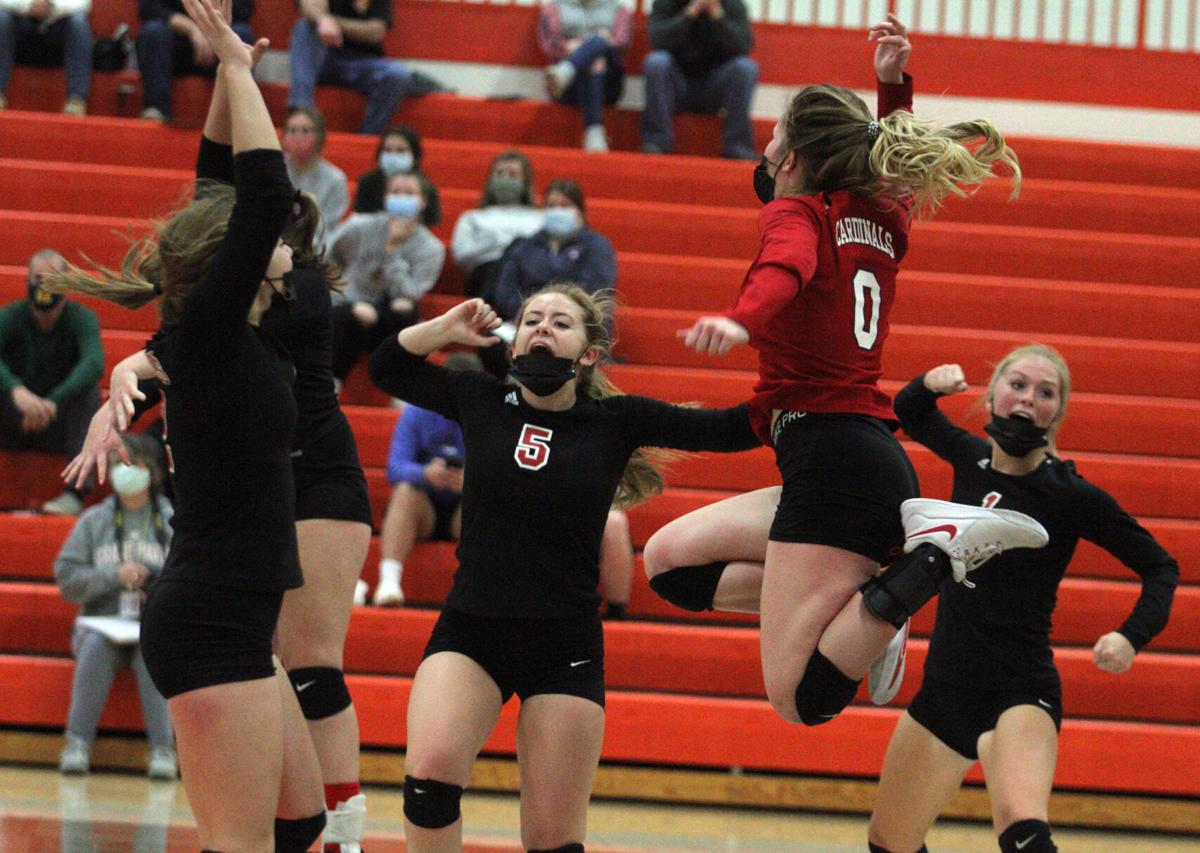 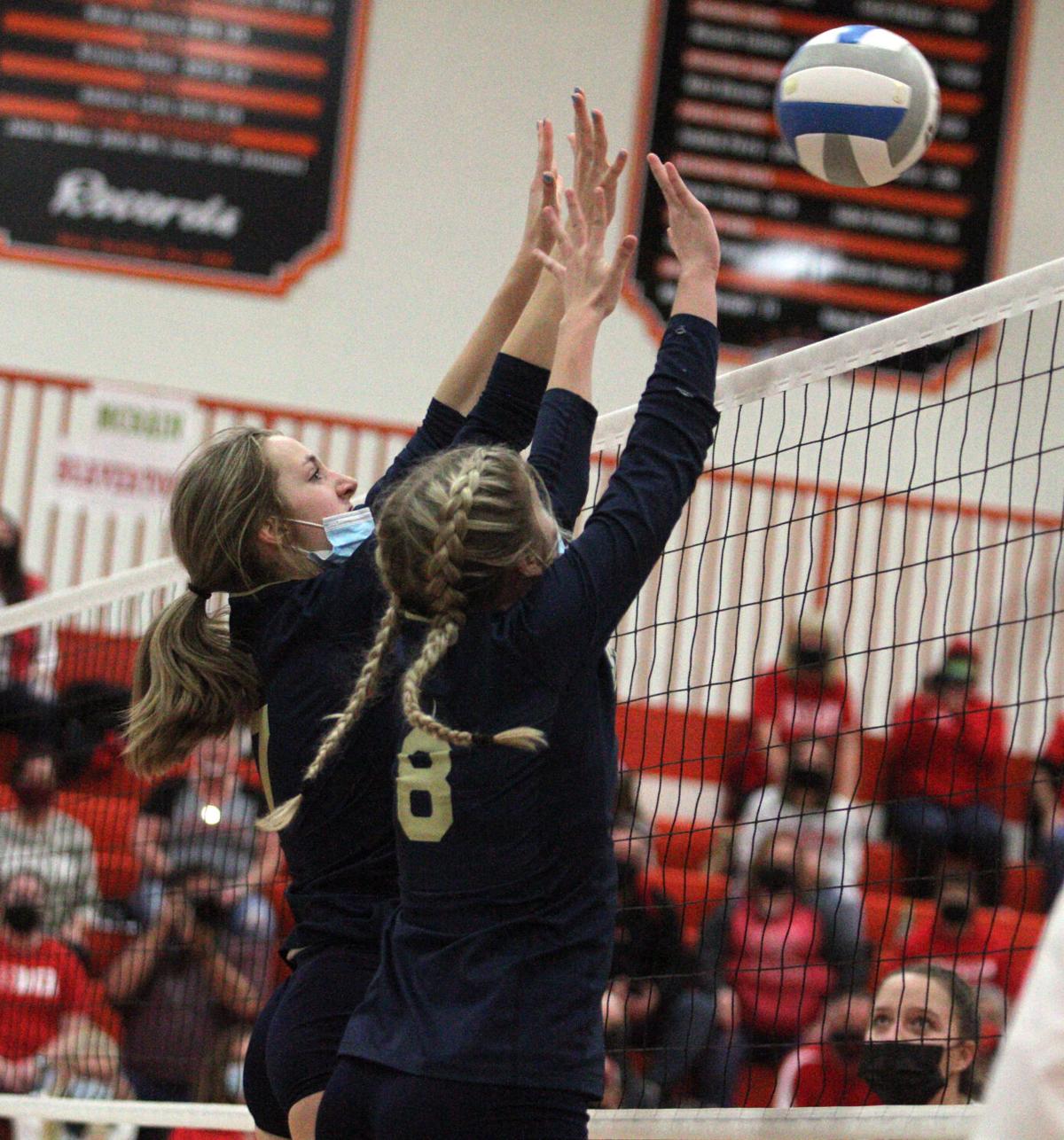 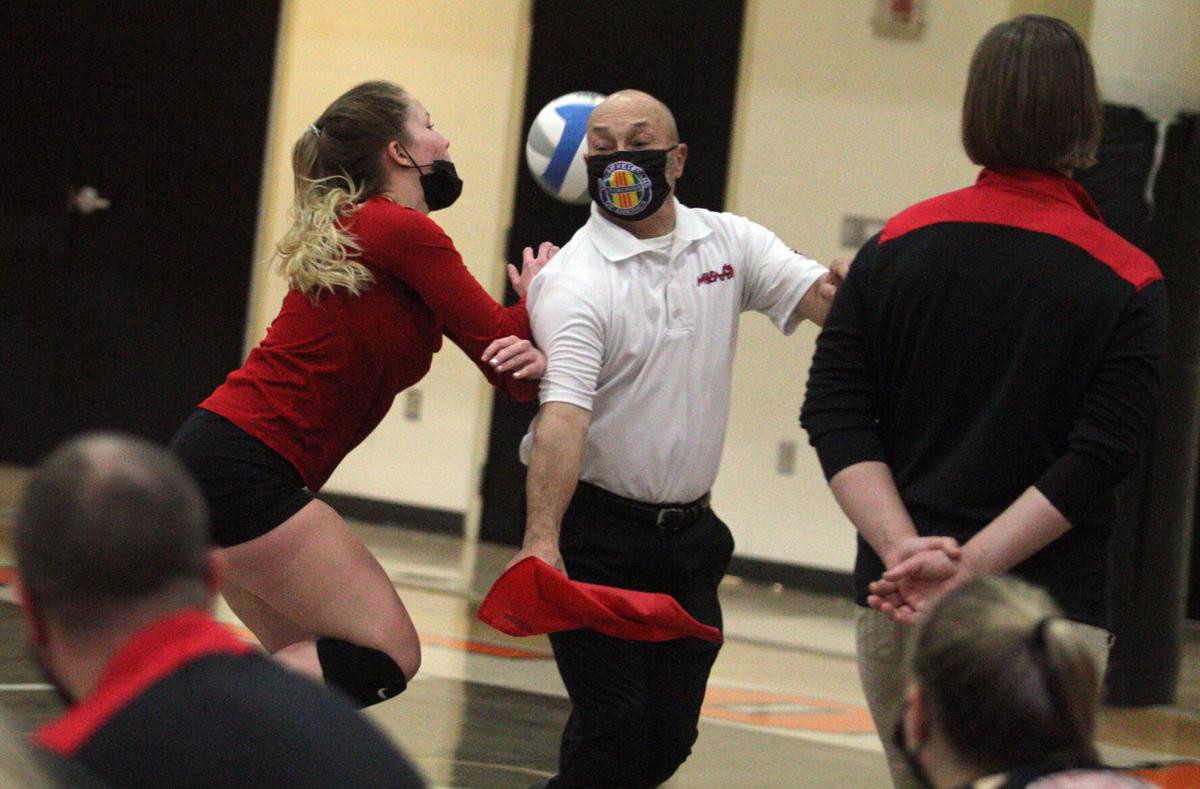 Johannesburg-Lewiston's Delaney Hogle runs into an official trying to chase down the ball Tuesday in Manton. 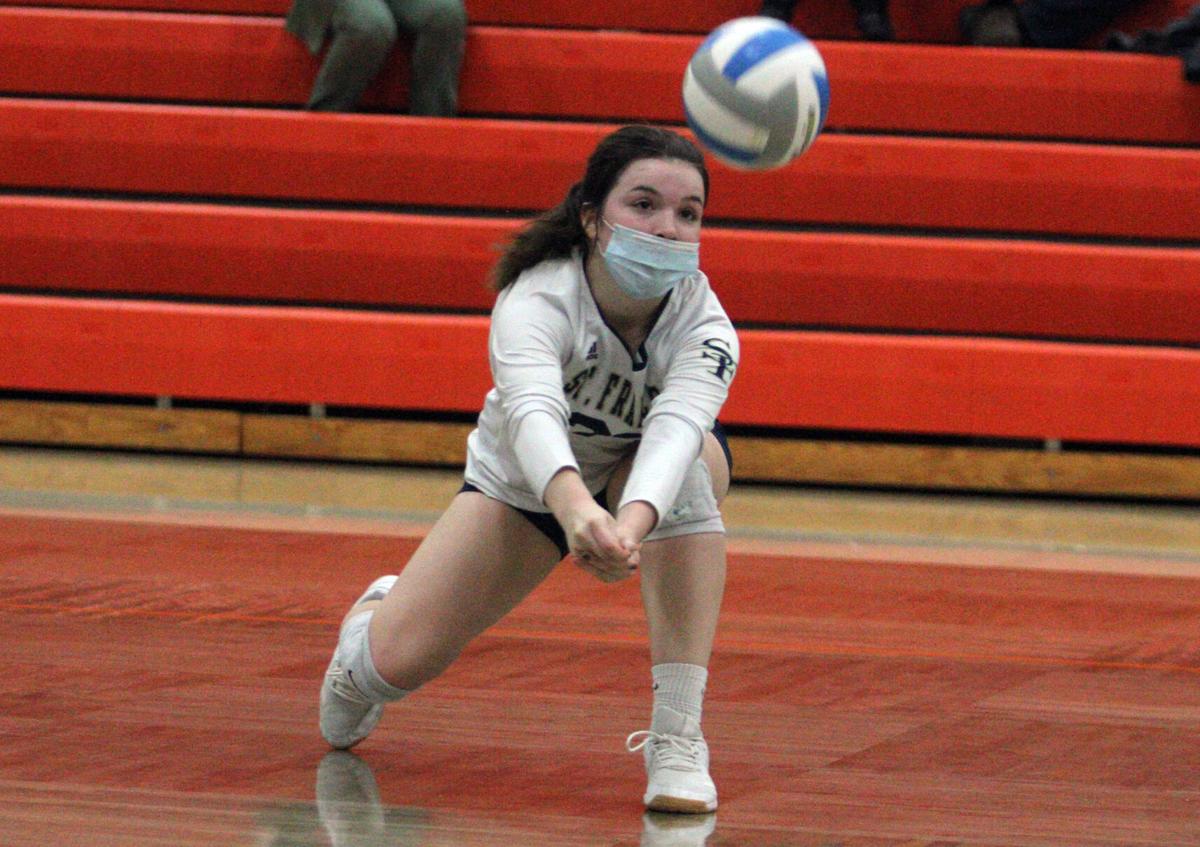 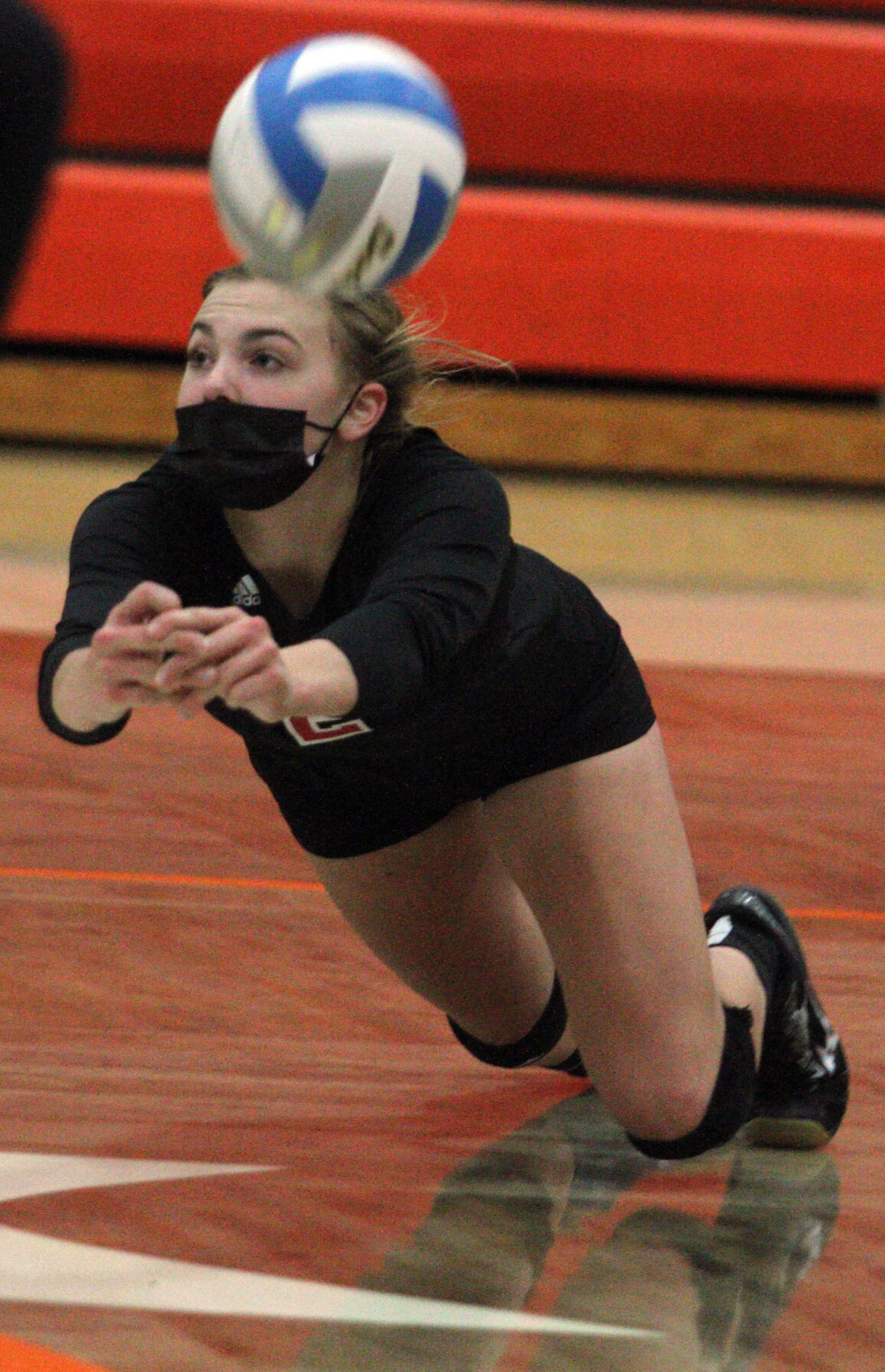 Johannesburg-Lewiston's Delaney Hogle runs into an official trying to chase down the ball Tuesday in Manton.

Johannesburg-Lewiston and Traverse City St. Francis each fell in Tuesday’s Division 3 volleyball regional semifinals at Manton, but not until each squad accomplished something big.

For Joburg, the feat was capturing the program’s first Ski Valley Conference championship. The Gladiators kept a streak of consecutive district championships alive at nine.

Some photos from Tuesday's Johannesburg-Lewiston volleyball regional game in Manton. Never got one of a player running into a ref before.https://t.co/PUSRya9iy8 pic.twitter.com/3t98IK3aao

“I’m incredibly proud of what the girls have accomplished because you know they put two numbers up on the board this year which has never been done for J-L,” said Joburg head coach Kristine Peppin, who has won five of the school’s six district titles in her 12 years at the helm.

Johannesburg-Lewiston rung up a 32-9 record this season, while St. Francis finishes 28-8-1.

The Cards dealt with a lot of adversity this season, as the only SVC team that couldn’t practice indoors because a small amount of the school district sat in a county still designated Phase 4 of Michigan’s Safe Start Plan, instead of Phase 5. As a result, Joburg practices outdoors on the softball fields, and the Cardinals’ first game was the first time the team stepped inside a gymnasium this season.

“We were outside till September,” Peppin said. “I think they’ve responded to the challenges that we’ve had to face this year like no other.”

St. Francis also dealt with quite a bit this season, juggling lineups with injuries popping up.

“I’m really proud of my team this year,” head coach Kathleen Nance said. “We were hit with a lot of different things that happened to us all year. We had sicknesses and injuries and all kinds of things. We had to change our lineup quite a bit throughout the season. They always rallied and they always just worked hard, no matter what. And this team just had a lot of heart all season and I’m a proud coach.”

Joburg held fleeting leads in the first two games against McBain and trailed 12-10 before going on a 10-1 run to charge into the lead. The Ramblers countered with a small 3-0 run, but the Cards finished off the set with a 5-0 run.

J-L reeled off a 6-0 spurt to start the third before McBain started chipping away at that and finally went in front with a 5-0 run featuring a pair of Emma Schierbeek aces. The Ramblers closed out the match with a 9-0 run.

“I think we just had a lot of nerves going on in first couple games,” Peppin said. “We made a lot of errors that were kind of uncharacteristic of us. Game game on the line in set three, they responded really well. I think they really saw what they could do and really shifted their mindset. We traded well with their hitters when we actually set up our offense. But we just had far too many hitting errors. A lot of the mistakes happened on our side of the court.”

Beaverton started strong from the beginning, reeling off a 9-1 run. The Glads drew within three on a Maggie Jarema kill, but that’s as close as they’d get.

The Beavers led 8-4 to start the second, as senior outside hitter Molly Gerow pounded shots from the left side, racking up kills on at least half of the team’s first dozen points.

“I think that we started a little bit nervous and we started really slow,” Nance said. “We tried to rally from that, but in that first set it was kind of a little bit too late for us to rally. I think the second set we still had some of those nerves. At the end of the day, they’re a great team and we didn’t have answers for some of what they were throwing at us.”

MAPLE CITY — Rob Flaska spent most of the last 35 years working alongside countless incredible basketball coaches whose lessons rubbed off on him.