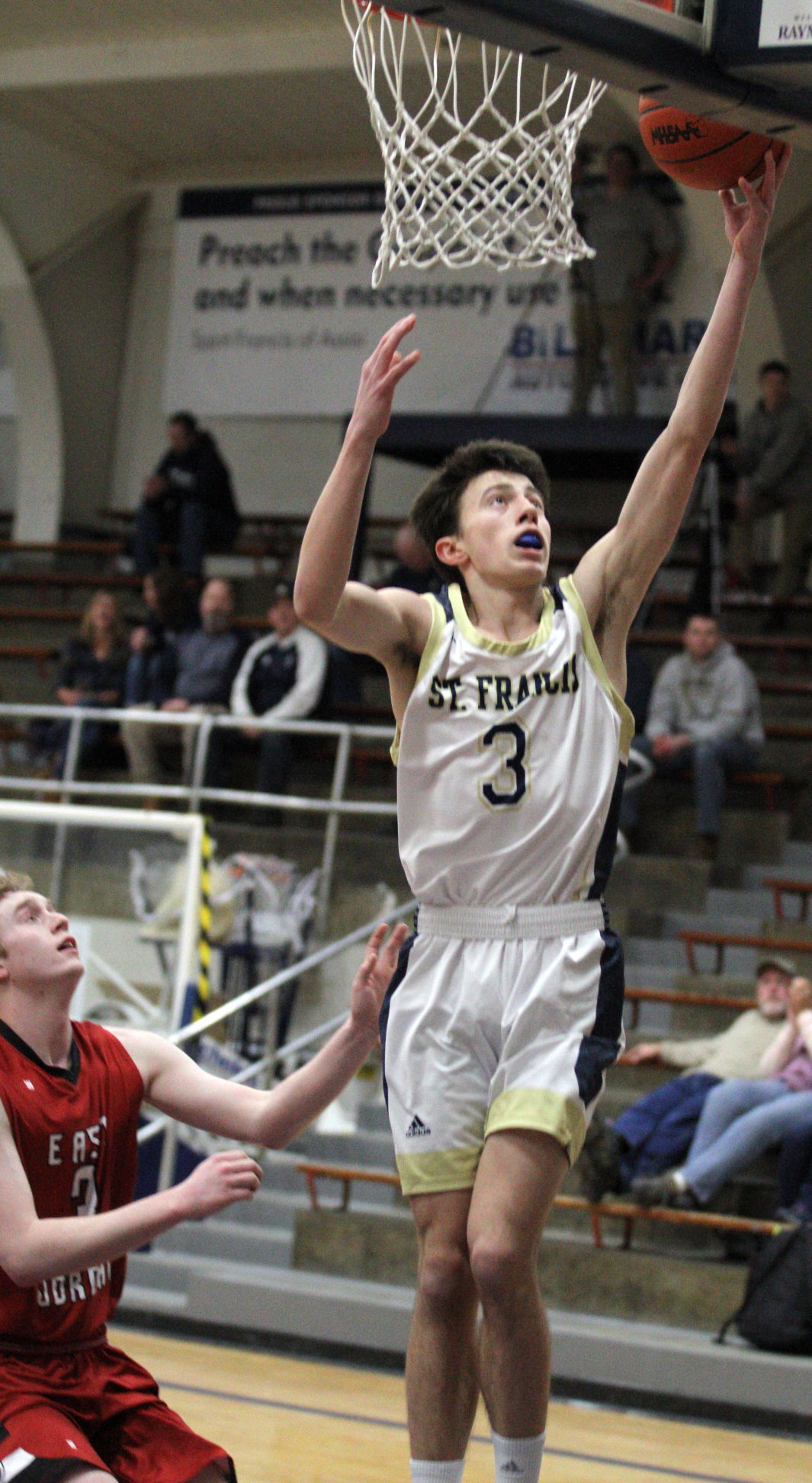 TC St. Francis guard Adam Gerberding (3) goes up for a layup Friday against East Jordan. Gerberding led the Gladiators with 15 points on 7-for-7 shooting. 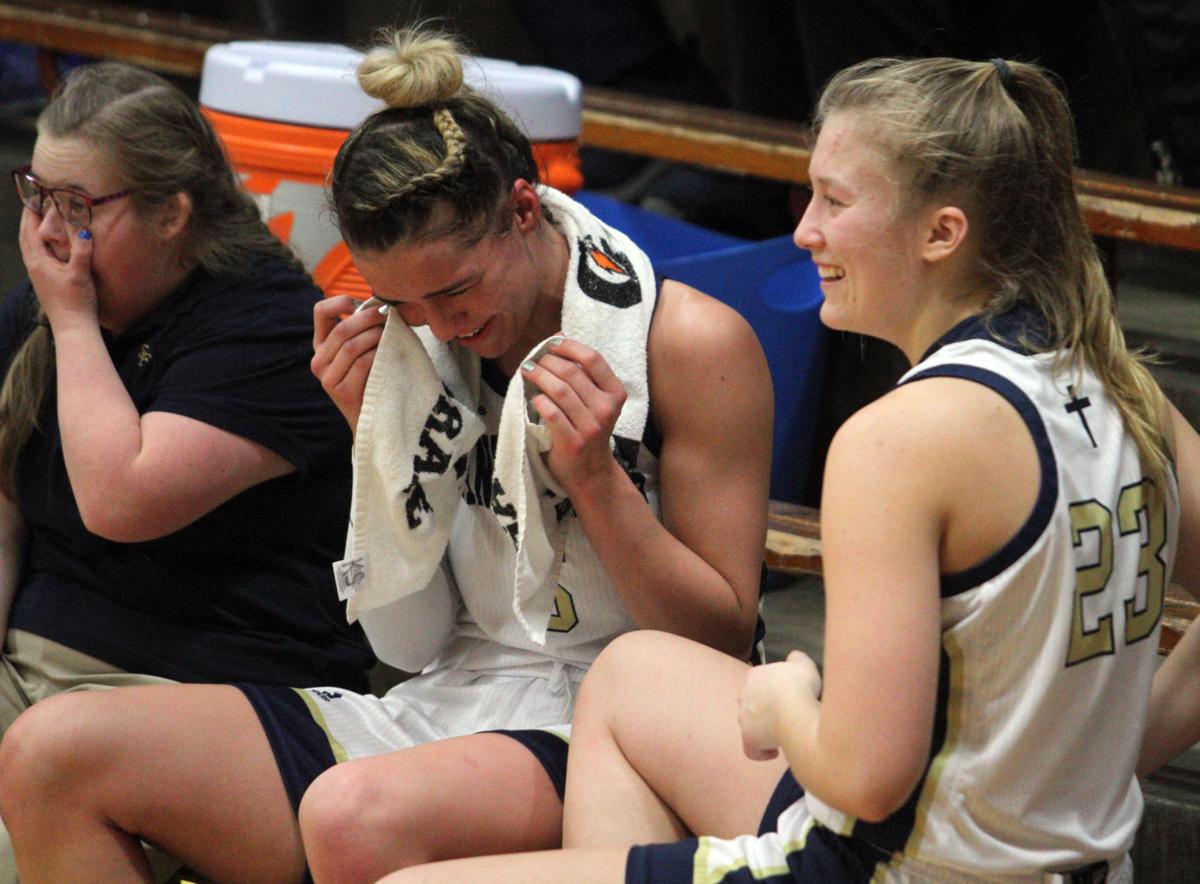 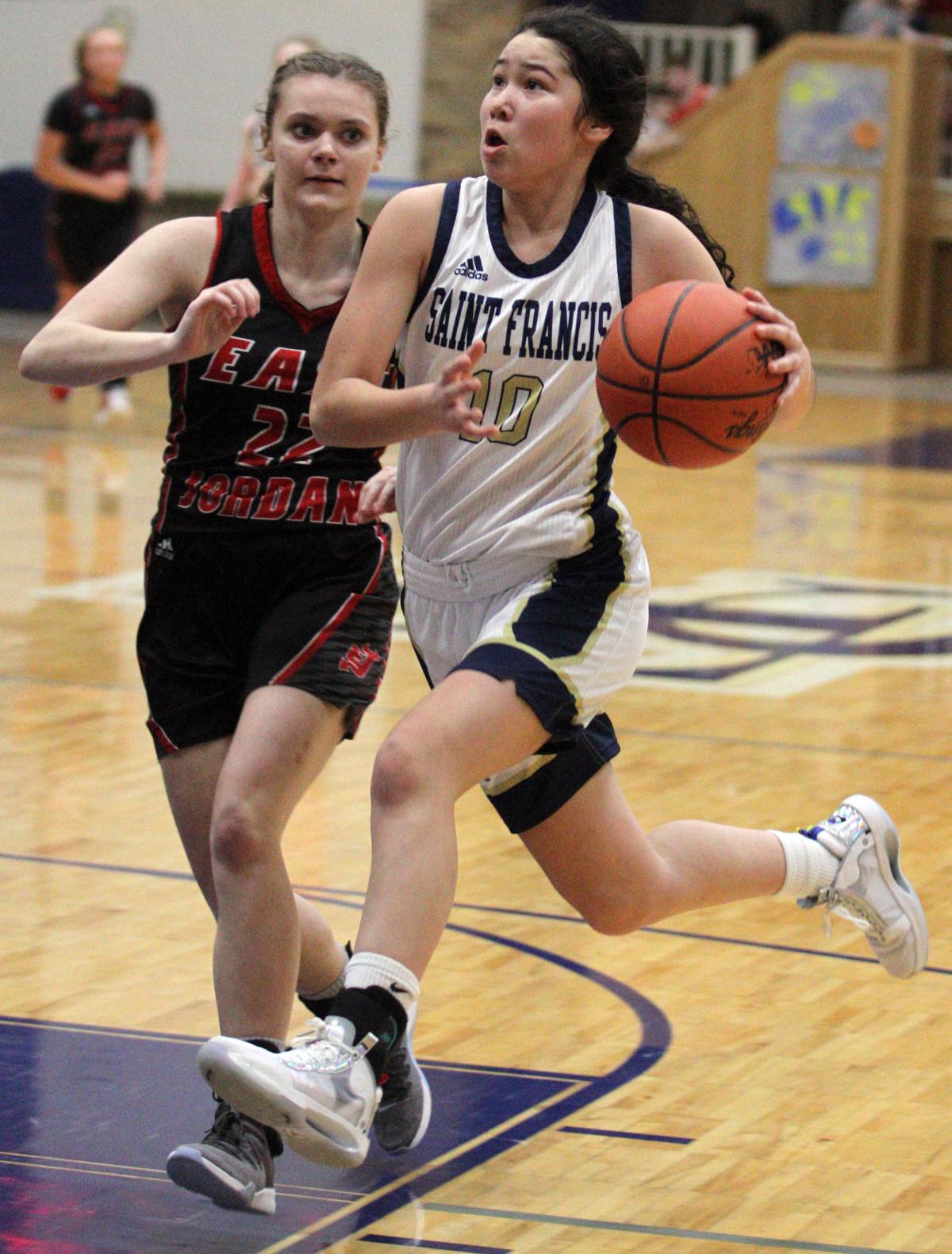 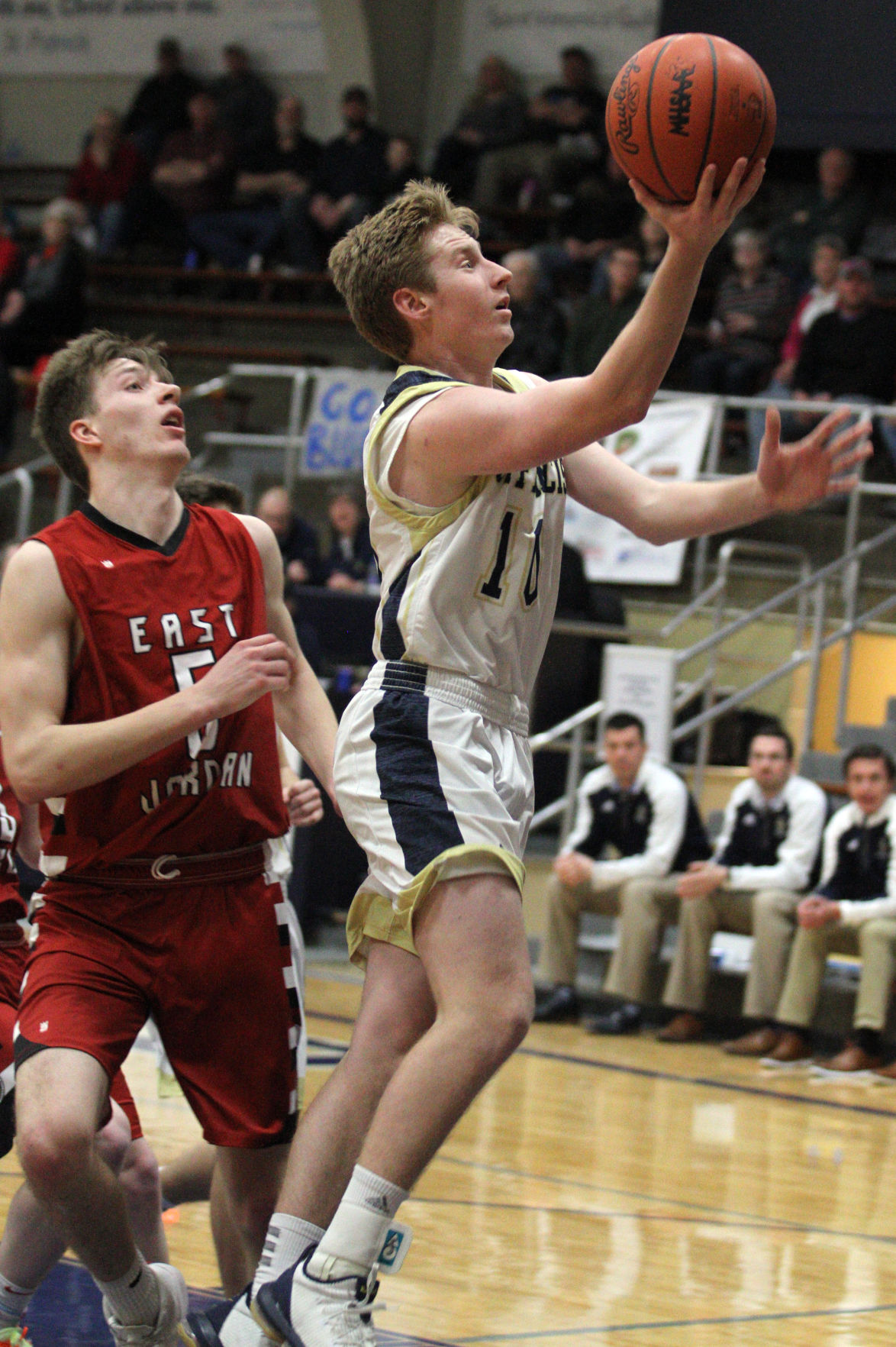 TC St. Francis guard Adam Gerberding (3) goes up for a layup Friday against East Jordan. Gerberding led the Gladiators with 15 points on 7-for-7 shooting.

TRAVERSE CITY — Traverse City St. Francis scored only four points in the second quarter, and still came away with a 59-43 boys basketball win over East Jordan.

A big part of those other three quarters was Adam Gerberding.

The Gladiators’ sophomore backup guard ignited a sometime-stagnant offense Friday to the tune of 15 points on a perfect 7-for-7 shooting from the field, leading the Gladiators to clinch a share of the Lake Michigan Conference championship.

“As we talked about in pre-game, it’s you have to stop Wyatt (Nausadis) and you had to stop (Brendan) Chouinard, and if we can control (Patrick) Mackey and keep him off the glass will be all right,” Red Devils head coach Nate Dzwik said. “We’ll make other guys beat us and credit to them, the other guys beat us tonight.”

St. Francis’ girls also beat East Jordan, winning 55-23. The win keeps the Glads (15-3, 11-1 LMC) in the thick of the Lake Michigan hunt, one game behind first-place Charlevoix, with road games against Elk Rapids and the Rayders next week.

Then East Jordan’s defense held the Glads to four points in the second and cut the deficit under 10 by halftime.

A Chandler Bartig baseline jumper with a minute left in the third quarter drew East Jordan within six, 36-30. TCSF responded with a 9-0 run that included who buckets from Gerberding and a Chouinard putback with six minutes left that put St. Francis up 15.

“There’s a reason why St. Francis wins games,” Dzwik said. “They expect to win those games. When we got the ball where it needed to be I thought we were going to be okay and they got the stop and they score the next nine. They took it out in a quick hurry.”

That forced the Devils out of their 2-3 zone.

“Second half we came out a bit more aggressive, so we ran the floor a little bit better and we played a little faster,” said Chouinard, who put up 10 points, six assists and two steals. “We wore them down and made more shots the second half. Adam Gerberding did a really good job off the bench.”

Dzwik said the Devils (7-10, 3-9 LMC) have something to play for in the league’s two finals games — Raymond and Stevenson. In order to get them both on the LMC’s all-conference team that assigns a certain number of picks based on the final standings, East Jordan hopes to pass teams like Kalkaska and Harbor Springs in order to get both a spot.

Gerberding could be in that position in the future if he keep this up.

“Just about two or three weeks ago we finally started getting him (Gerberding) back in the mix and started getting some rotation,” St. Francis head coach Sean Finnegan said. “He responded. It just really came with confidence. Once he kind of settled down and had that confidence, you can see what kind of player he’s capable of being. He’s a good athlete and a tough kid.”

There’s not much turnaround time for the Glads, who host Midland at 2:30 p.m. Saturday. East Jordan hosts Kalkaska, St. Ignace and Grayling next week.

Gladiator girls come out on top in final home game

“They stepped up tonight,” Gladiators head coach Tyler Schell said. “One thing we talked about with it being senior night tonight is coming in and giving them the best senior night they could have. To have that supporting cast with those younger girls to come out with a win like that was great for the seniors.”

When the three seniors came out of the game with 2:31 left, Schaub broke down in tears on the bench.

“It was crazy to me, thinking that this was the last time I was going to play on our home court,” Schaub said. “I’m just so proud of my team and everything we’ve come to accomplish this year. So it was a little emotional thinking of the past four years how they flew by so fast. When they tell you it goes by fast, they’re not kidding.”

“It’s so difficult when you dig yourself a hole against a good basketball team,” East Jordan head coach Steve Hines said. “It seems like it takes all of your energy just to try to get back to even and then just came up a little short. But they’re good ball club. They played well; they shot the ball well.”

St. Francis is bracing for the possibility of facing Michigan-bound Elise Stuck next Friday.

Stuck has missed the entire season after suffering a torn ACL in a travel game last summer, but is rumored to be near a return in time for the playoffs — or even the Rayders’ contest against the Gladiators.

“I had heard that she’s possibly going to come back,” Schell said. “But we’re going to prepare the same way we always do so.”