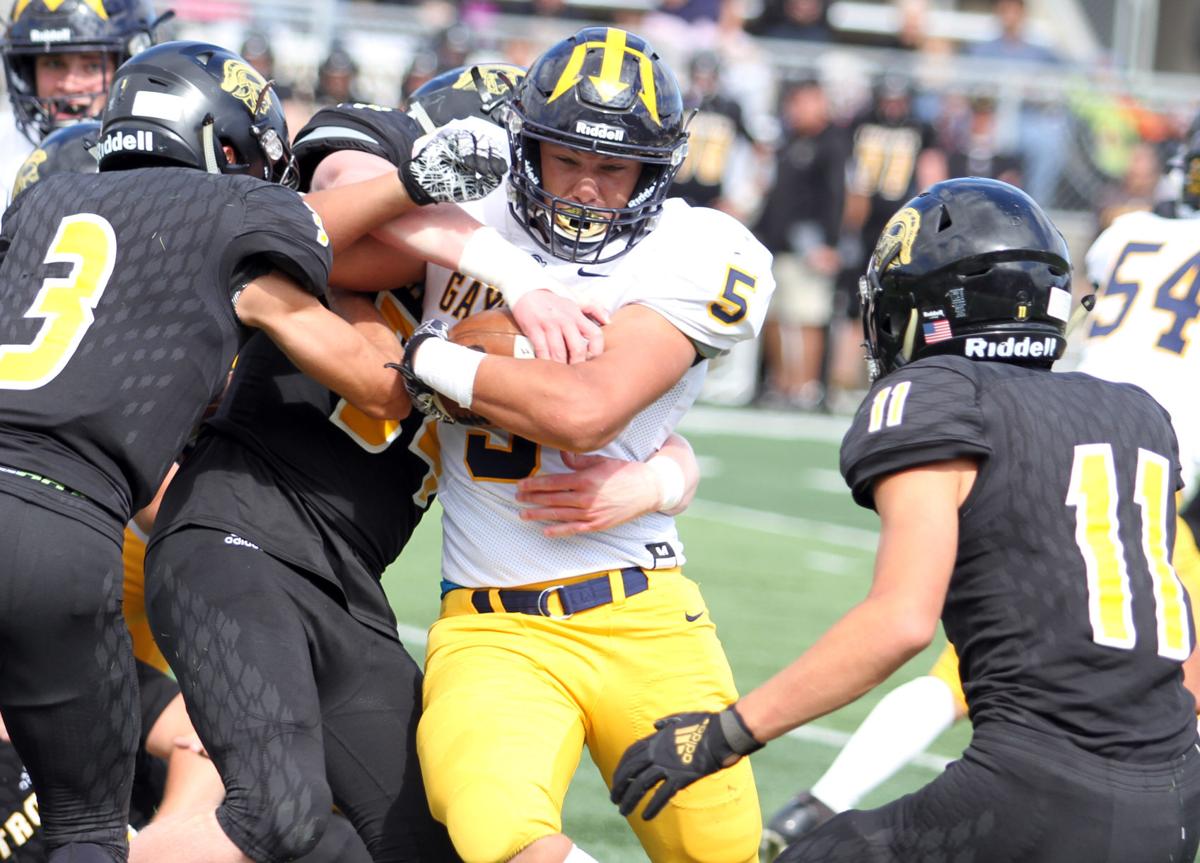 Gaylord’s Ben Welch (5) fights for yardage in a game against Traverse City Central. 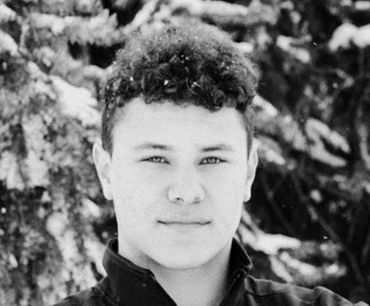 The Warriors made players wear pads during their camp.

“That was my chance to show how aggressive I could be,” said Welch.

Boy, did he ever.

The Gaylord outside linebacker did all the hitting to make an impression, and received an offer on the spot at the camp last summer.

“He stood out to us then,” said Grand View assistant coach Jacob Gilbert. “That is one of our big evaluation opportunities for kids we bring in. We like to put the pads on and see if guys can hit or be physical. You can only tell so much by running around the field.”

The Grand View camp came during a whirlwind travel marathon that included going to camps at Saginaw Valley State University, McKendree University in southern Illinois, the Warriors’ campus in Des Moines, Iowa, and then a 16-hour drive to Raleigh, North Carolina. All in a Chevy Impala.

Welch and his mother Brandy camped for the first part of the lengthy trip, but then she insisted on hotels the rest of the way.

They could have just just as well stopped after Grand View, where he made a big impression. Welch plans to major in criminal justice to pursue forensic science at the Iowa school.

“He was physical, played with his hands and wasn’t afraid to get in there and hit somebody,” Gilbert said.

Welch attended one of the Warriors’ practices during spring ball before things shut down because of the coronavirus. He didn’t have a jacket, and continued to mull around on the sideline and observe drills while others left because of the cold.

“I believe his college coaches are looking for him to be an outside linebacker, which is similar to what he played for us during his high school career,” Gaylord head coach Sean Sargent said. “I’m excited to see how Ben will grow physically once he gets into a full-time college strength and conditioning program.

“As with many incoming freshmen, I think Ben has great potential to make an impact on special teams. He knows what it means to pursue ball carriers and be a real solid tackler. With the defensive skills he showed in high school and the potential improvement he will make with the college strength and conditioning, I think Ben will do some great things the next four years.”

Welch (6-0, 200 pounds) is one of eight linebackers in the Warriors’ 2020 recruiting class. Iowa high school teams can resume activities June 1, giving the NAIA Warriors hope that they can in that same timeframe.

Participating with pads allowed Welch to show his edge and physicality more than most camps.

Welch, who transferred from Port Huron Northern just before his freshman season, played almost every snap for Gaylord last year, seeing time on kickoffs as a gunner, kick returns as a blocker, field goal block, punt return and punting units.

The only time he left the field came when he asked for a breather.

A second-team all-Big North Conference pick at defensive line and Record-Eagle Dream Team selection as a lineman as well, Welch often played multiple linebacker positions where he’d be purely an outside linebacker in some packages and play with his hand in the dirt on the defensive line in others. He racked up 43 tackles, three blocked field goals and three touchdowns (two rushing, one receiving) as a fullback.

GSM's Koenig slides in at Alma

GAYLORD — Vayda Voss didn’t think the Upper Peninsula was for her.

Olli getting back in net at Tech

GAYLORD — It’s been awhile since Reagan Olli last made a high school save.