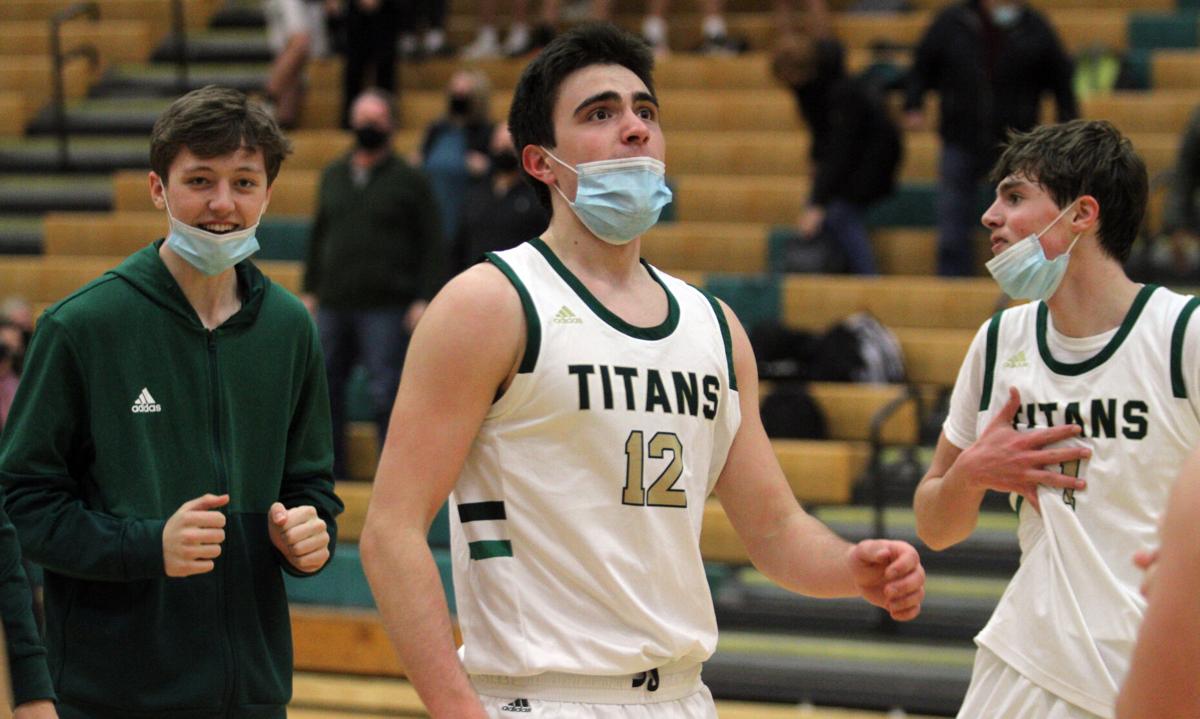 Traverse City West’s Mel Frechette (12) looks up at the scoreboard after hitting the game-winning 3-pointer at the buzzer to beat Cadillac 55-54. 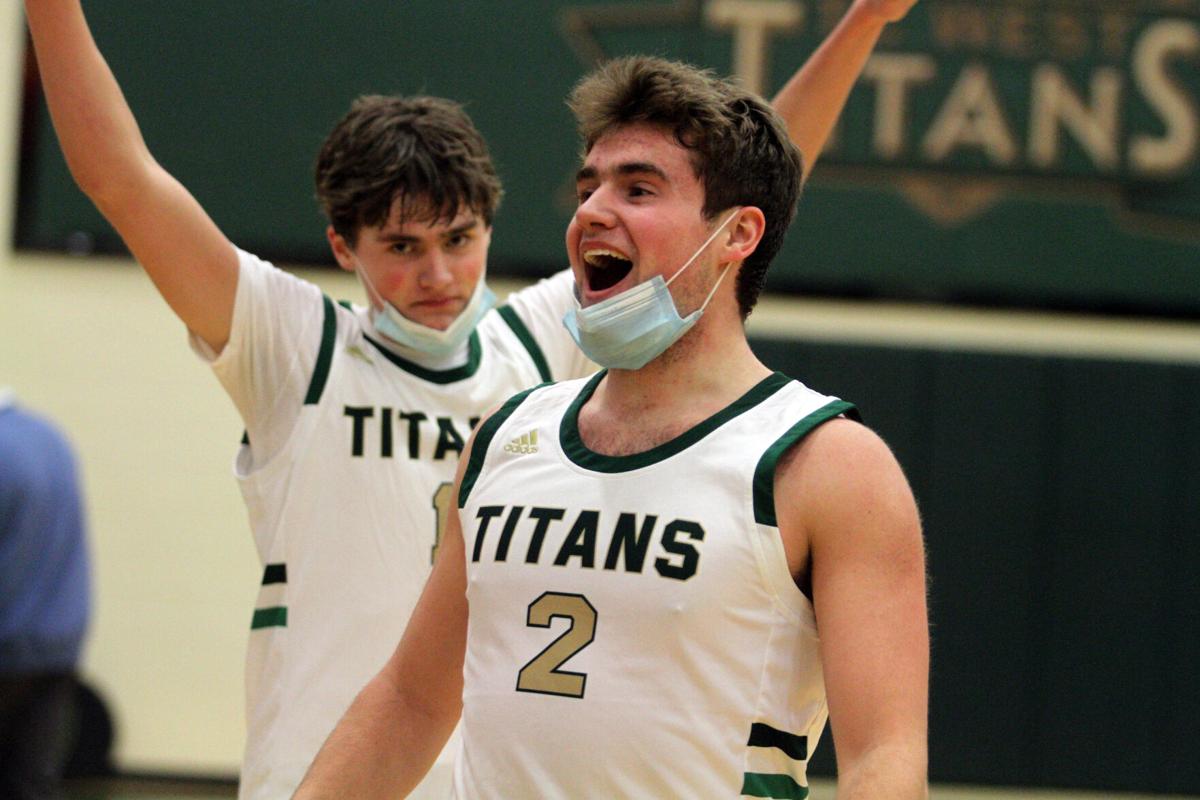 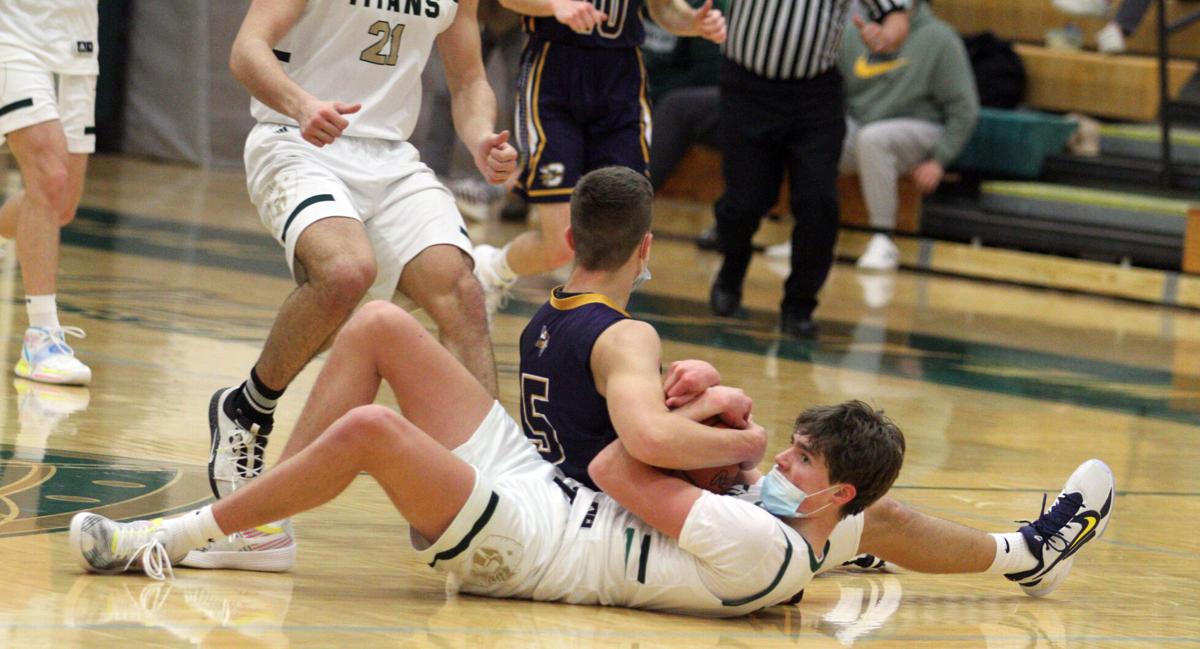 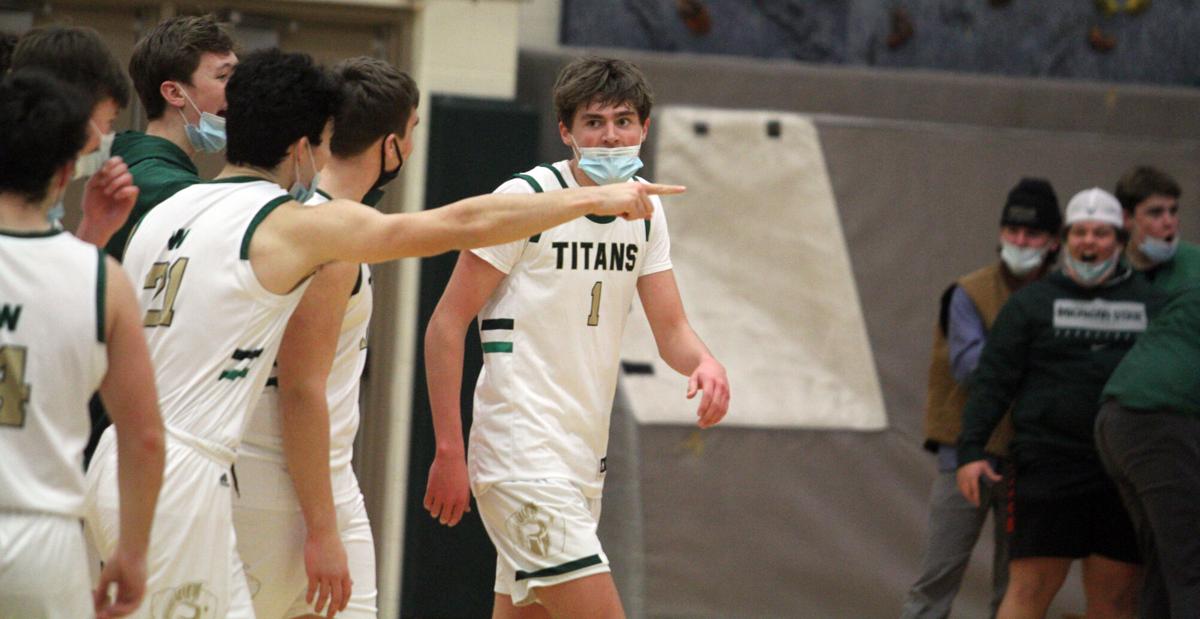 Traverse City West's Will Goston (21) gestures at teammate Jon O'Connor (1) after O'Connor dunked to end the first half Tuesday against Cadillac.

Traverse City West’s Mel Frechette (12) looks up at the scoreboard after hitting the game-winning 3-pointer at the buzzer to beat Cadillac 55-54.

Traverse City West's Will Goston (21) gestures at teammate Jon O'Connor (1) after O'Connor dunked to end the first half Tuesday against Cadillac.

But it went perfectly.

“I just happened to be standing right there and caught it and everyone’s yelling, ‘Shoot it!’ and I just shot it,” Frechette said. “It just felt good off my finger, and went in and just felt unreal.

“I kind of blacked out for a second. It just didn’t feel real.”

The Titans had 6.1 seconds to work with after coach Sanders Frye called a timeout. The play was designed to get Jon O’Connor to ball for a game-tying bucket inside the arc, but 6-foot-9 Cadillac center Cole Jenema foiled the play.

Titans forward Will Gaston tipped the ball away from Jenema and out to Frechette, who loaded up the second the ball touched his hands and let loose a hasty 3-pointer that found its target as the final horn sounded.

“I haven’t had emotions like that in sports for over a year,” O’Connor said. “It felt so good.”

O’Connor led West (3-0, 3-0 Big North) with 13 points, as the Titans spread it out. Six players scored six or more points, and Carson Whipple added four. TC Central is the only other BNC team without a conference loss.

Garett Schuler, who took the inbound pass on the final play and then found O’Connor open on the block before Jenema intervened, scored 10 for West, Frechette added nine, Patrick O’Connor seven and Luke Robertson and Gaston each recorded a half dozen.

“It worked really well to get Jon the ball where we wanted him to have it,” West head coach Sanders Frye said. “They just happen to have a 6-9 guy there waiting for him. I told the guys afterwards, sometimes you just have to make plays. Will has the tip out and Mel to catch it, gather himself and hit it. Sometimes that’s how it has to work out, so it’s just a great play off of a broken set.”

Cadillac falls to 0-2 this season despite being outscored by a single point in each of their two BNC road games. The Vikings lost by one to Petoskey as well.

“We secure one rebound and we get out of here and we’re feeling a whole lot better about ourselves,” Cadillac head coach Ryan Benzenberg said. “So, back to the drawing board. I just told our guys the best thing about pandemic basketball is short memory. We have one practice and we play, so we don’t get to dwell on it too much.”

Jenema led the Vikings with 19 points and eight rebounds, while Evan Borr added 10 points and nine rebounds. Jaden Montague scored 15 — all on 3-pointers.

“We showed some grit,” Benzenberg said. “This group is learning how to win. I graduated six seniors, including a four-year starting point guard, so this group has to figure out how to do it right and sometimes you have to come up on the short end of that for it to burn enough.”

Montague accounted for three-quarters of Cadillac’s first-quarter scoring, knocking down a trio of 3-pointers, and Austin Abram also hitting one as the Vikings led 12-6 early on. Gaston’s baseline triple tied the game at 12 and Frechette’s layup off a Jon O’Connor assist gave West a 14-12 the Titans would hold onto until the fourth quarter.

West’s lead swelled to as much as 13, the Vikings rained threes again early in the fourth quarter, with Borr draining one and Montague two back to back to tie the game at 42. Whipple put West up 44-42 with a driving layup.

A Jenema 3-pointer with 1:12 left put Cadillac up 51-49, and the Vikings led by as much as four on two Jenema free throws. Jon O’Connor hit 3-pointers on both ends of Jenema’s scores, which left the Titans trailing 54-52 when Frye called a timeout with 6.1 seconds left to diagram the final play.

West reeled off a 12-0 run to end the second quarter and take a 30-18 lead into halftime. Jon O’Connor put an exclamation point on that run with a steal and dunk as time expired.

“That was definitely huge, that really gave us some momentum and some energy going into halftime,” Frechette said.

“I got my charge first,” O’Connor said. “I was already hyped, and came down and hit a three. Then I got really hyped, got the steal and dunked and went into half feeling good.”

TRAVERSE CITY — Traverse City Central set itself up nicely for the rest of the Big North Conference wrestling season.