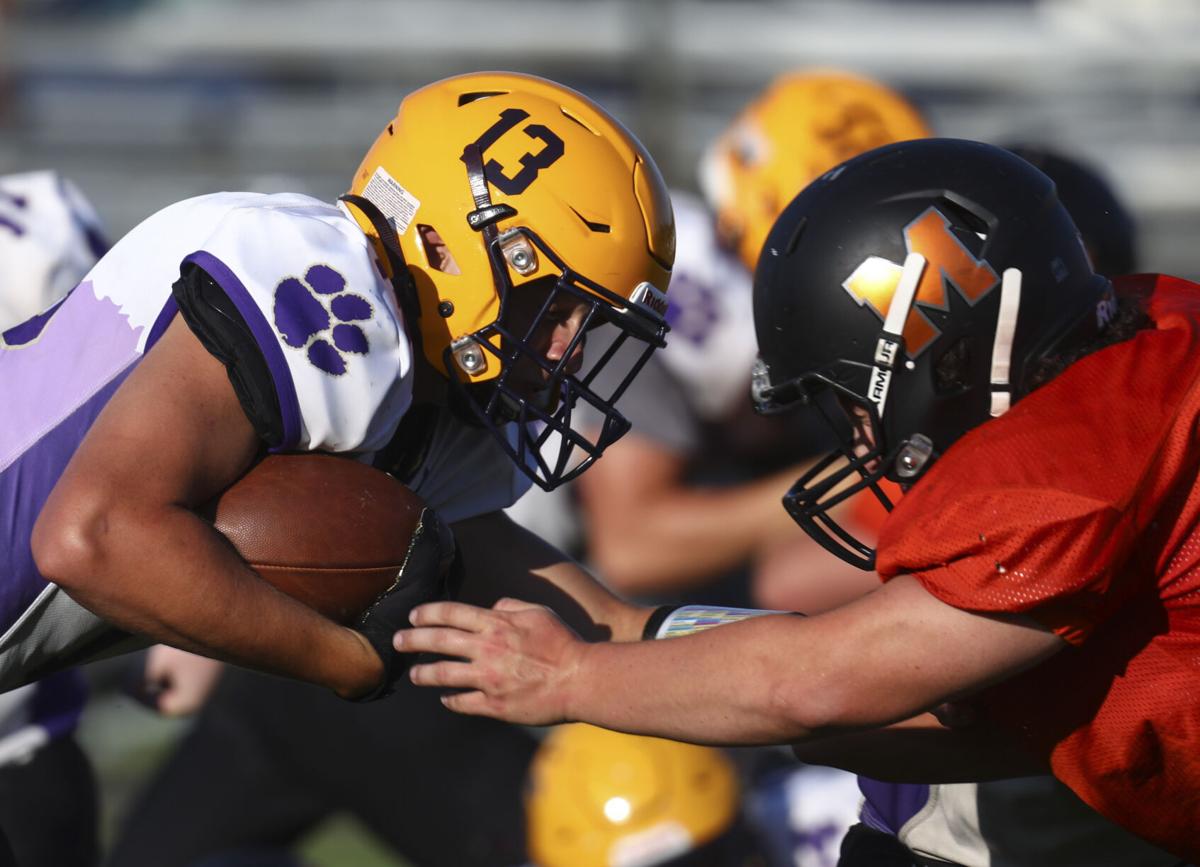 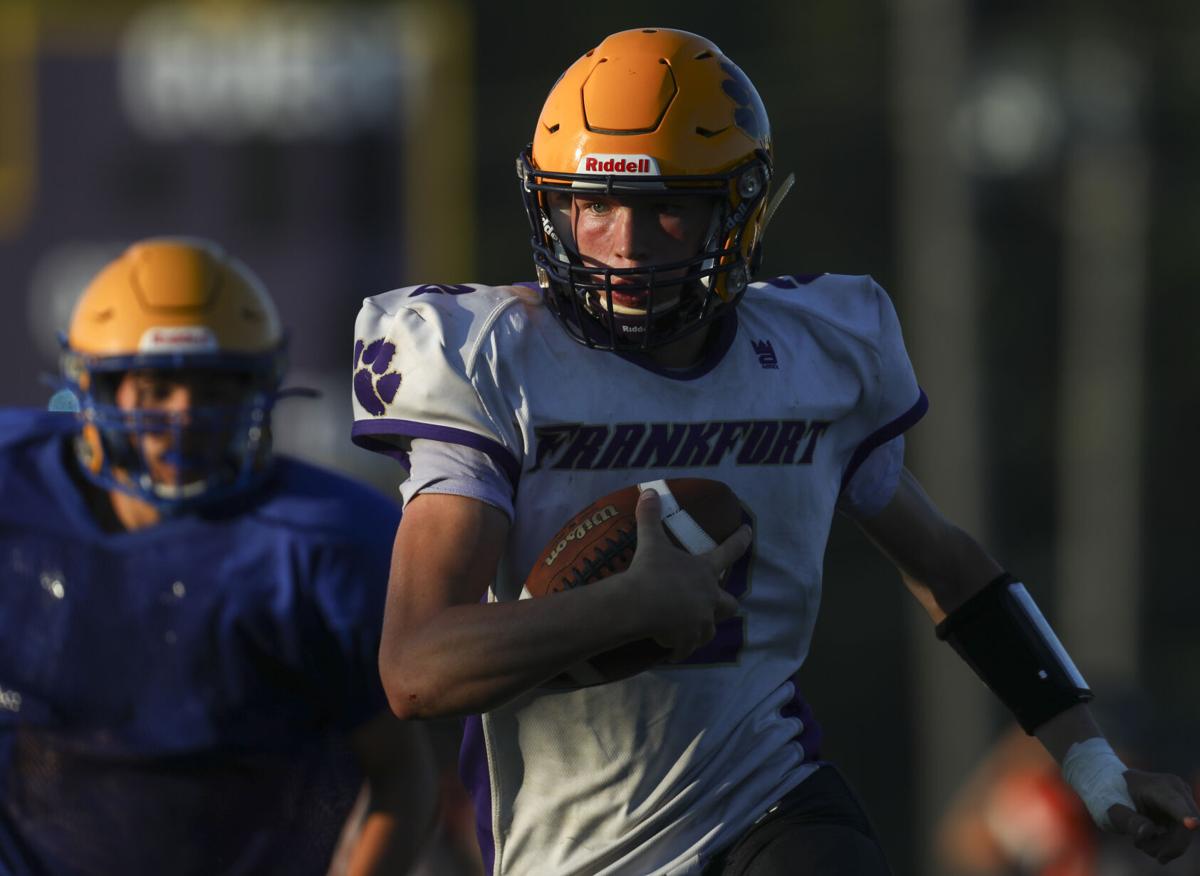 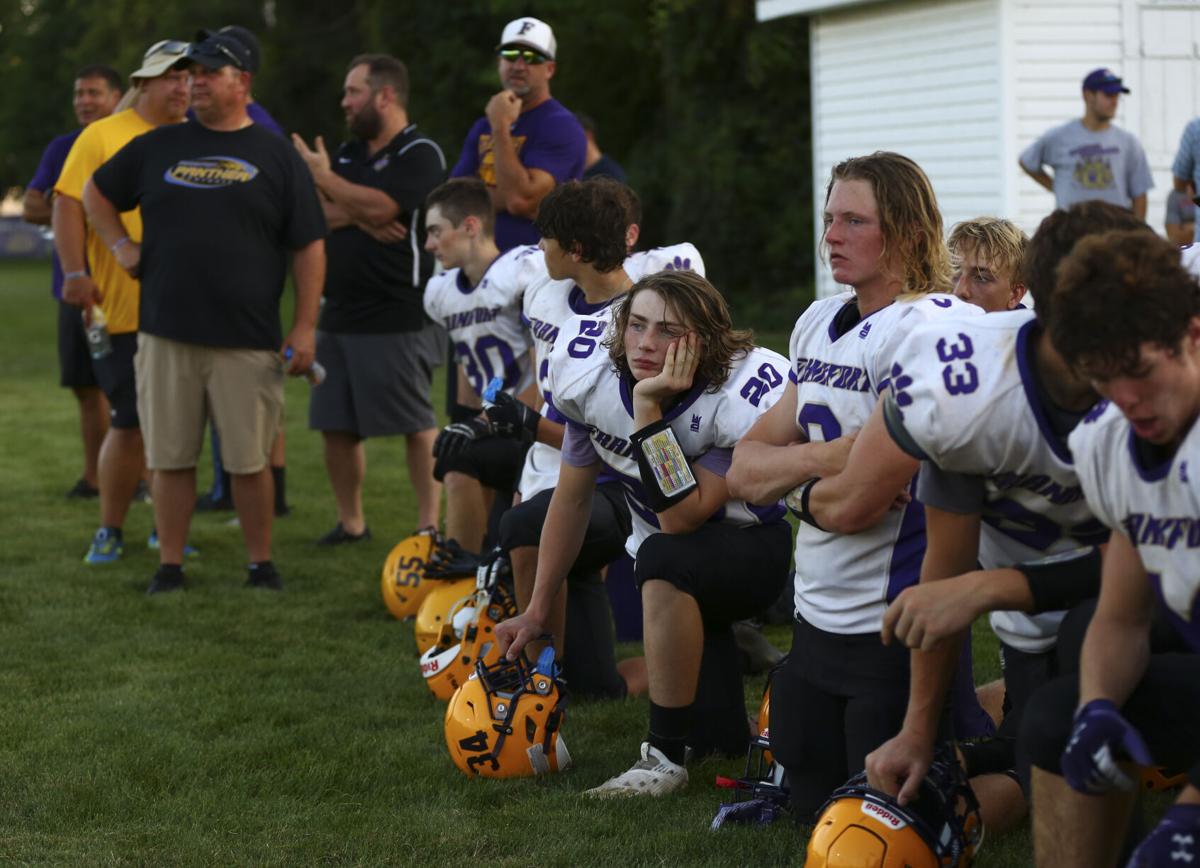 The Frankfort Panthers scrimmage with the Mancelona Ironmen at Frankfort High School in Frankfort on Thursday.

The Frankfort Panthers scrimmage with the Mancelona Ironmen at Frankfort High School in Frankfort on Thursday.

Struggling with low varsity numbers the last several years, the Panthers scrapped junior varsity for one united team with 24 players.

“So now that we combine JV varsity — we only had two freshmen, with a decent-sized sophomore class — we’re going to be able to move around quite a bit,” junior running back Adam Mills said. “So it’s going to help us a lot, just having more numbers for practice and games.”

With only two freshmen and seven sophomores, the Panthers wouldn’t even be able to field a starting lineup without using at least juniors to fill gaps and have some backups.

“We had a lot of kids work hard, took COVID as an advantage,” Mills said. “And they continued to show up in the summer.”

Two area the Panthers don’t need to worry much about are the backfield and lines.

With leading rusher and tackler Mills back, and Benzie Central transfer Nick Stevenson taking over at quarterback, Frankfort has some explosion to its offense, as displayed in Thursday’s scrimmage, where the Panthers broke long runs for touchdowns on three consecutive plays.

“Those three linemen have been guys that we’ve been pulling up from JV when they were young. So those guys are are invaluable, and then we have our leading rusher back and we get Nick that transferred.”

“We’re looking on really just having our team show up every day for practice ready to play, and show up on Friday nights again ready to play,” Mills said. “We’re not going to put any goals aside for what we want to win. We just want to show up to every game ready and having that winning mentality because that’s something we’ve lacked in the past five years.”

Schindler said getting the Panthers back to when the program was a powerhouse year in and year out is the target.

“It’s my alma mater,” Schindler said. “And to have success here, would be the pillar of coaching for me. To be able to be on the west side of the field and watch your team have success is hard to put that in words how that feels is an alum.”

Frankfort starts the season Friday with a home game against Schindler’s other alma mater, Evart. Schindler played for Evart through his junior season before moving to Frankfort.

Evart posted a 6-3 mark a season ago, winning two district games before a close 38-35 loss to undefeated Oscoda, which later forfeited a regional game to Traverse City St. Francis.

“That’ll be a good test for us,” Schindler said. “That’ll be our first thing. Then we haven’t won the conference in forever. Back in 2016, I think. For Frankfort, that’s like 20 years.”

The Panthers play Oscoda in back-to-back weeks in a consecutive home-and-home series Sept. 10 and 17.

“We’re really close team,” Mills said. “We go swimming after practice and get ice cream after practice and I think that’s going to help a lot having that brotherhood. Especially having COVID splitting us apart. Being away from each other. I think everyone is really excited to have that family atmosphere.”

Panthers at a glance