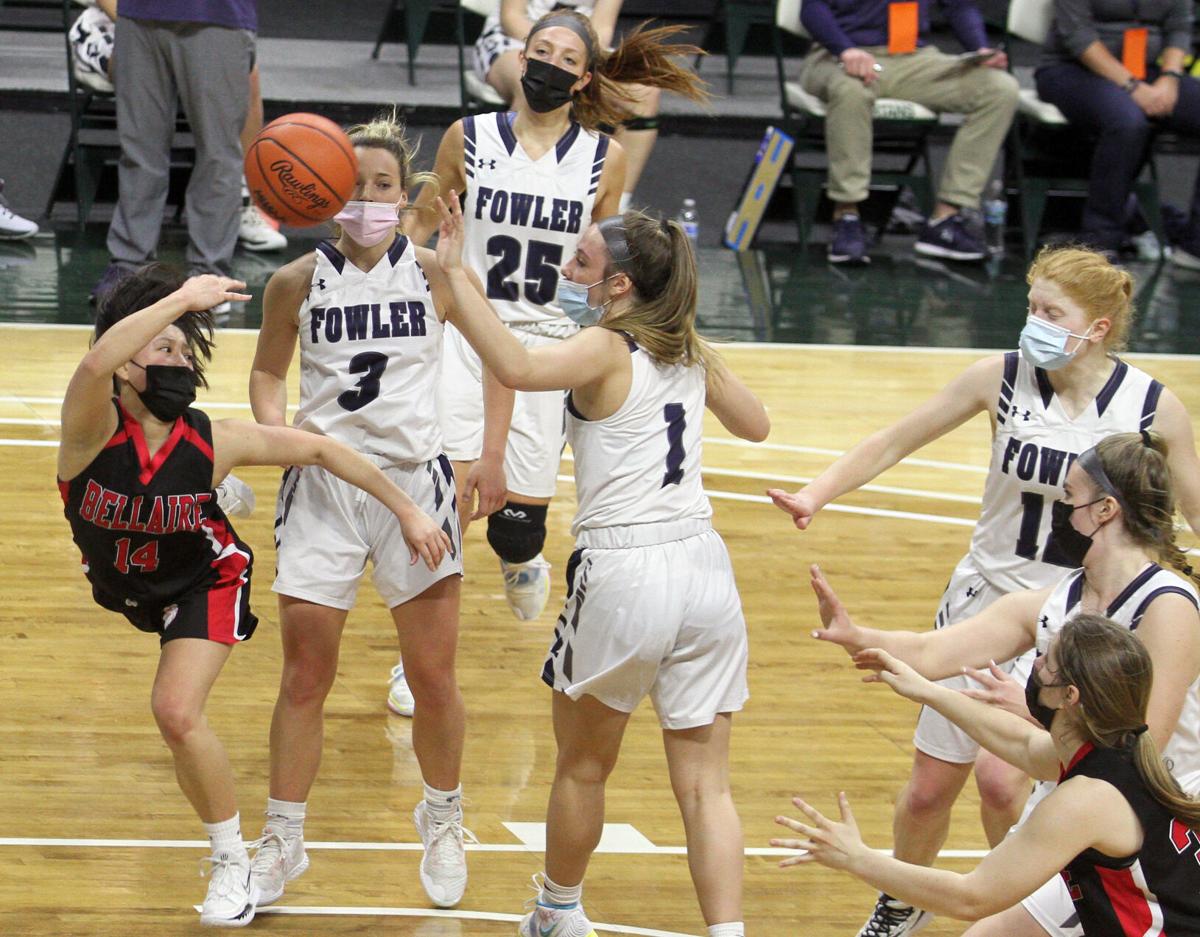 Bellaire senior Noel Mann (14) tries to save the ball from going out of bounds in Friday’s Division 4 state championship game against Fowler at Michigan State University. 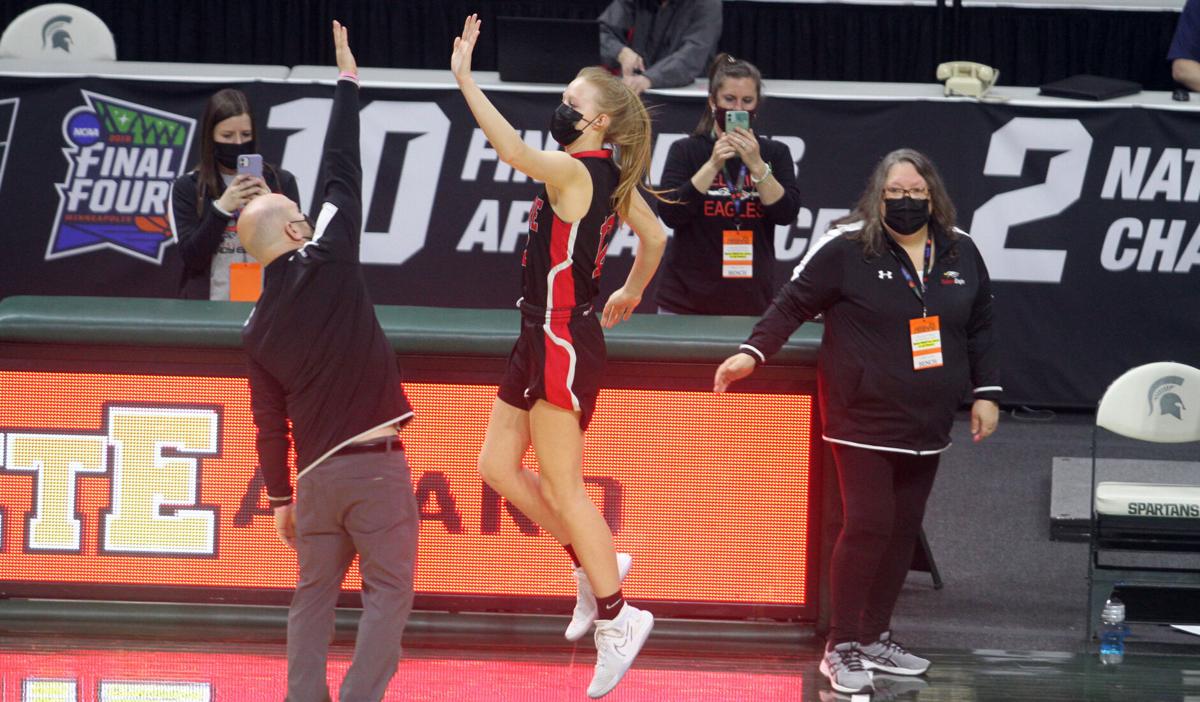 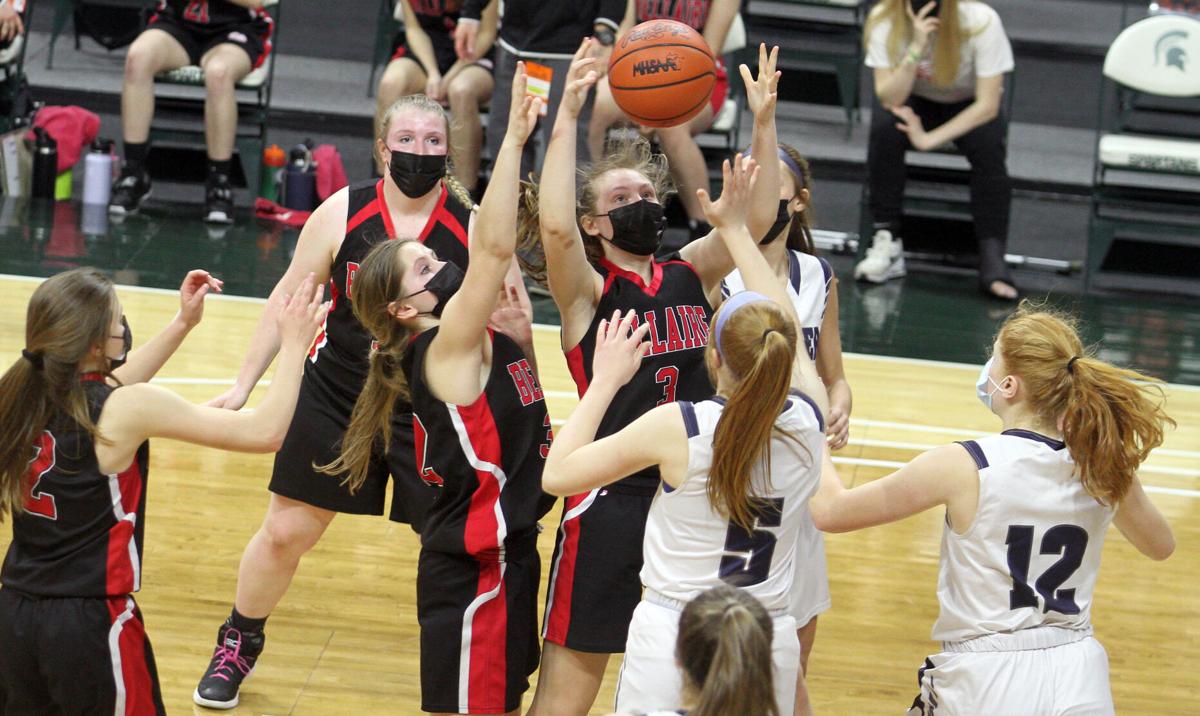 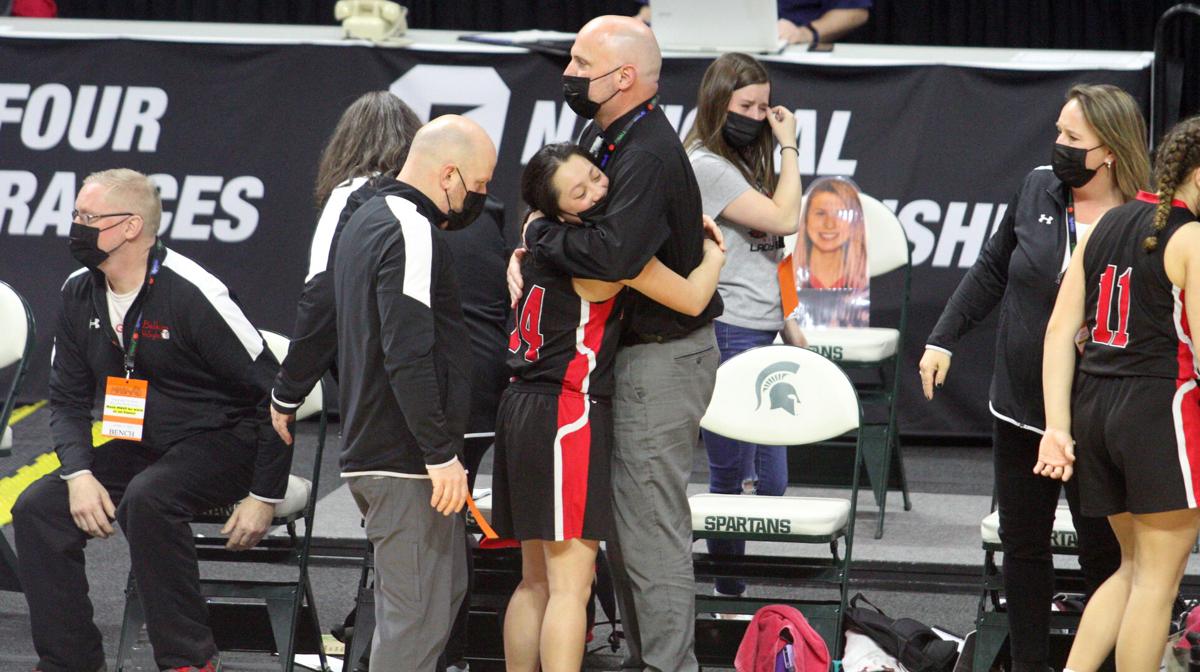 Bellaire senior Noel Mann (14) tries to save the ball from going out of bounds in Friday’s Division 4 state championship game against Fowler at Michigan State University.

EAST LANSING — Fowler head coach Nathan Goerge makes sure to write one recurring message on the board in the locker room before each game.

The Fowler Eagles (16-4) absorbed and executed Goerge’s mission Friday in East Lansing as they used a full-court press and excellent defense to defeat the Bellaire Eagles 54-20 in the Division 4 girls basketball state title game.

Bellaire (18-4) made its first trip to the Breslin Center in school history and add another trophy to a growing list of accomplishments for the girls basketball program.

The best finish in school history comes on the heels of a 2020 season shut down when Bellaire scorched through districts and regionals with a 23-1 record. Senior Delaney Goodwin said Bellaire dreamed of playing at Michigan State University since they were kids and the run to Breslin still holds weight in the Eagles’ history books.

“It’s very special,” Goodwin said of the experience. “We’ve been talking about this for a long time. We’ve dreamed of coming here so we are just proud to be here.”

A full-court press executed to perfection by Fowler in the first half continued to cause fits for Bellaire throughout the day. Fowler forced turnovers on four of Bellaire’s first six possessions and totaled six in the first quarter to take an 11-3 lead.

The lead looked to be manageable, but Fowler’s Mia Riley erupted for 12 points on a perfect 5-for-5 shooting in the second quarter. The big run by Riley happened during a 9 minute, 11 second gap in scoring for Bellaire.

Mia, along with her younger sister Emma, combined for 16 points in the second quarter to extend a 29-7 halftime lead and ended with a total of 34 points for Fowler.

Fowler took a 22 point lead into halftime, but that ballooned to 49-12 by the end of the third. Bellaire shot 8-for-40 from the floor and only managed five field goals through three quarters of play. Bellaire’s half-court offense often resorted to contested layups and the team was unable to dominate the glass like in the semifinal.

Fowler outrebounded Bellaire 36-24 and held it to 0-for-7 from behind the arc.

“It definitely was a little upsetting because normally we can bounce back when shots aren’t falling ... I didn’t know what was happening,” Bellaire senior Katie Decker said. “I guess maybe nerves and we never really settled in.”

“We had the confidence that teams will struggle against it (the press) with our speed and aggressiveness and it’s worked,” Goerge said. ”It doesn’t work every game but for the most part I think teams have a hard time adjusting to because we have so many guards we can rotate in.”

Fischer and Goerge agreed that preparing for a state final where both teams use the press religiously was a challenge.

“They are just a different level of defense that we knew was coming, but to simulate it, you can’t, so much respect to a very well rounded team,” Fischer said. “The score is what it is, but we knew that’s not reflective of what this team has done and what this team is capable of.”

“I don’t think any other organization could have gotten through a season like this,” Fischer said of the MHSAA. “When most of us throw in the towel, they fought for us for when a lot of people didn’t want to go that place so we are beyond appreciative to them it’s just say and I’m just so proud of my girls.

“We obviously lose a very special strong senior group here, but I appreciate everything they’ve done and they inspire a lot of little ones,” Fischer said. “Just getting this far is special and also helps the overall program because it’s like, ‘Hey, I want to be like her; I idolized her.’ This will benefit the program as well.”

TRAVERSE CITY — It all started with a Discord whiparound during the Hawk Owls Rocket League tournament last fall.

AUBURN HILLS — Traverse City West got back on the winning track, pulling out an 8-1 victory over Auburn Hills Avondale following a close 12-9 …