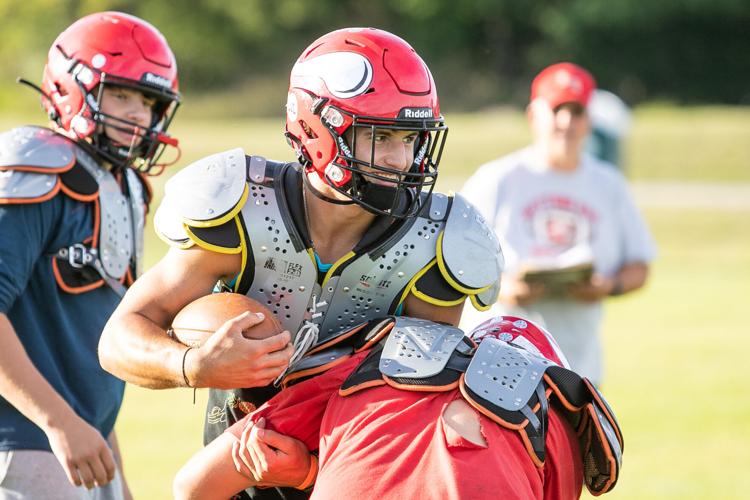 Suttons Bay’s Shawn Bramer gets tackled during drills in practice. 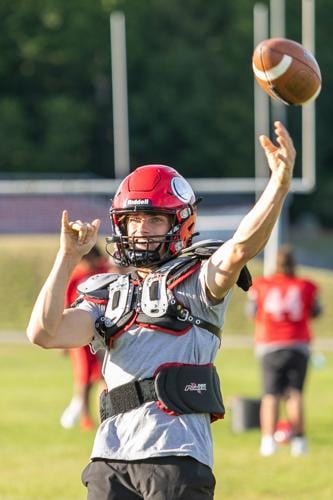 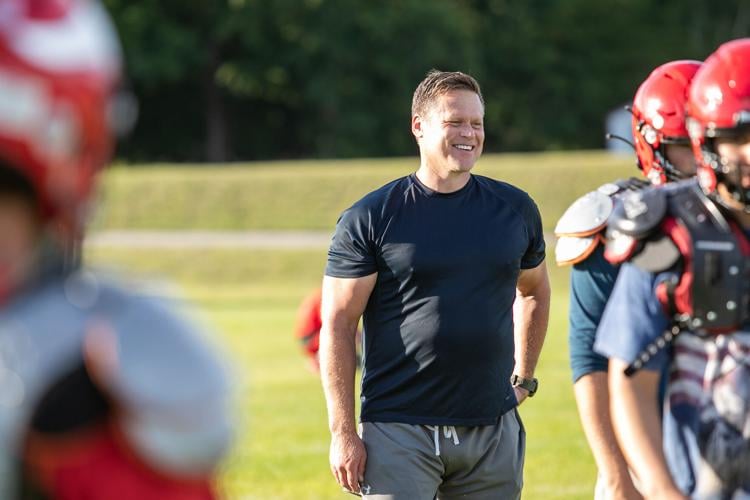 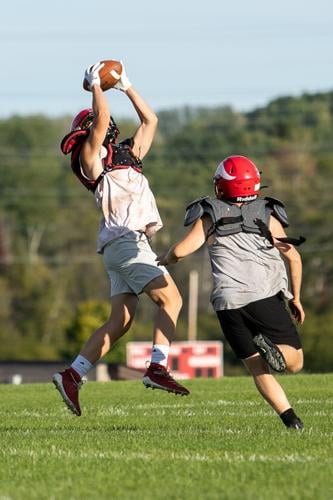 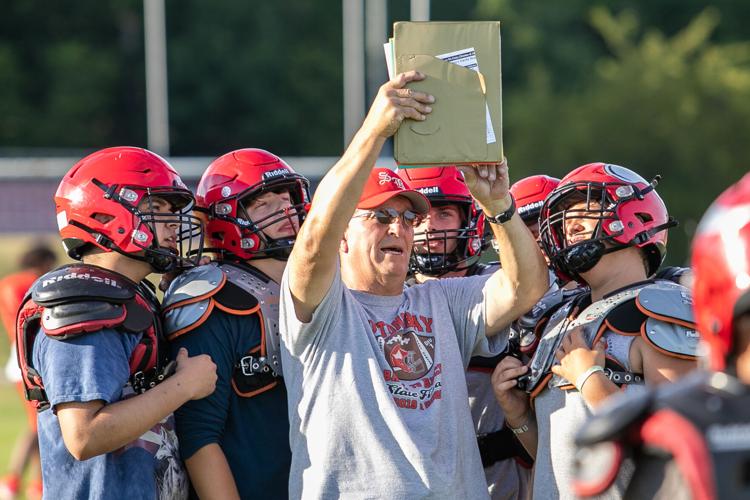 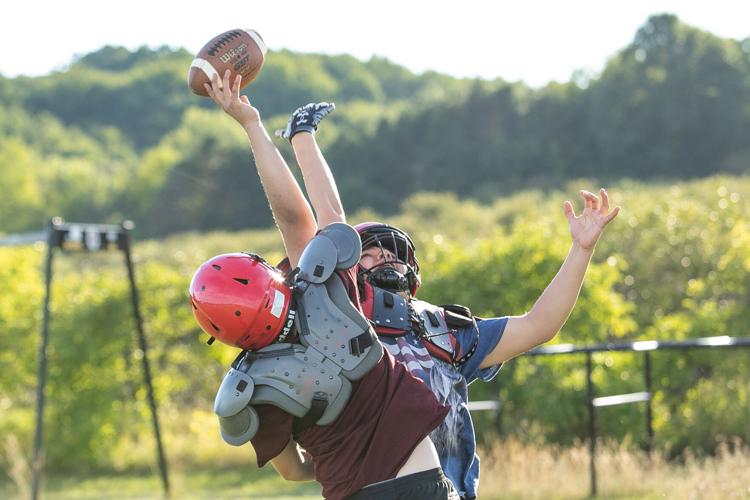 Suttons Bay’s Jack Glynn breaks up a pass for Dennis Anderson during practice. 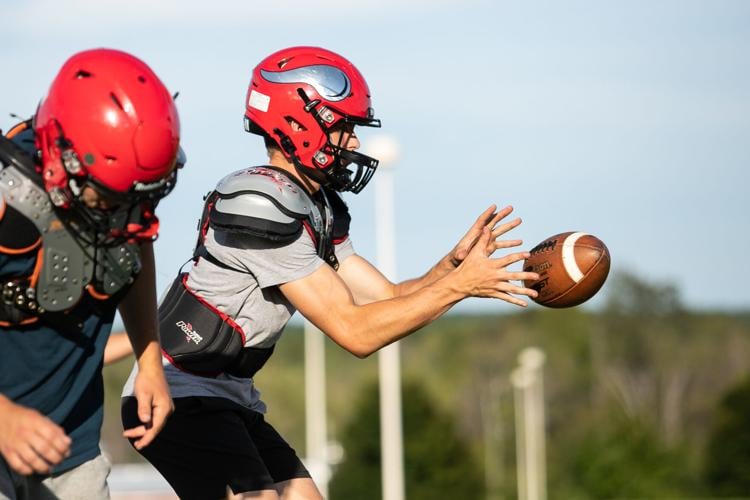 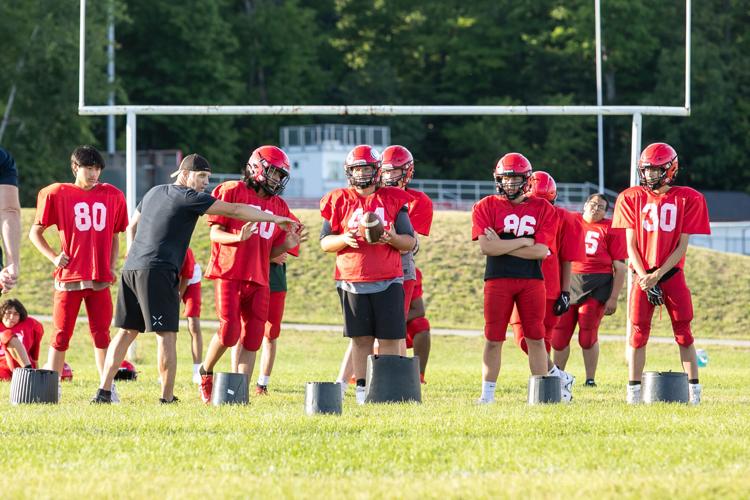 Suttons Bay’s Shawn Bramer gets tackled during drills in practice.

Suttons Bay’s Jack Glynn breaks up a pass for Dennis Anderson during practice.

SUTTONS BAY — They have stood on the precipice, been so close they could reach out and touch it. But that state championship trophy has remained elusive to the Norsemen of Suttons Bay.

For the last three seasons, head coach Garrick Opie and his band of Norsemen have been forced to stand on the field while their opponents celebrate and raise state title hardware. Tears of joy on one side. Tears of sadness on the other.

Three times the season has been an incredible upward ride that ended with the steepest fall.

Each year, the glory of a state championship for the perennial 8-man contender has been there. Each year, it has been snatched away and replaced with heartbreak.

“I feel like we’re ready to get over that,” senior starting quarterback Dylan Barnowski said. “We don’t want to have another heartbreak season. We want to prove just how good this program still is. A lot of people don’t think we’re going to be any good this year, but I think they’re wrong.”

“We lost some of our defense. Seven out of the eight were seniors, and that’s tough,” Barnowski said. “But we’ll find replacements. People will have to step up.”

And Barnowski is ready to step up as a leader.

“So much different. So much more confidence,” Barnowski said when asked to compare starting his junior and senior campaigns. “I get to lead the team. Last year as the quarterback, I’m supposed to lead the team. But as a junior, those seniors led the team. This season, I’m looking forward to leading and leading by example in practice and in games.”

The QB said he feels like he has ownership of this year’s team and can feel the promise and potential of the guys on the field.

“I’m already out here getting on guys,” Barnowski said. “If kids aren’t paying attention, I’m harping on them. We’re out here to play for people who want to play. We’re not going to have anyone out here who’s half-assing it.”

Opie has already noticed a big difference in his quarterback through just the first week of practice.

“I always try to push even very humble kids out of their comfort zone and say, ‘Hey, we need you as a leader. It’s now your turn. You’ve had guys that you’ve looked up to in the past, but now it’s your turn to be looked up to and lead — and lead well,’” the head coach said.

Opie has found that having the seniors teach the younger players and serve as pseudo-coaches has been a great benefit to the team.

“I want that mutual respect. I want them to be able to teach each other in a kind way and not in a disrespectful or demeaning way,” Opie said. “When they can do that, it really converts. The senior is having to think about it in a way he really hasn’t had to before, so it’s teaching him more as well. That really works.”

Coaching is about thinking and learning. Opie said it’s not about barking orders all day.

“These are good kids and good young men that try, smart young men who have been here and convert what we’ve told them and taught them into action and to do it well,” he said.

The 2021 offense was a pure and unabated behemoth for the Norse. Suttons Bay lit up their opponents to the tune of 554 points in their 12 wins. The defense was no slouch either, pitching two shutouts and holding the opposition to less than 20 points 11 times in an 8-man game that is built for offense and lots of it.

Can the 2022 squad match that dominance?

“We’ll see,” Opie said. “It’s going to be a matter of seeing what chess pieces we have and then where we can place kids to succeed. That’s really it.”

The biggest question for those on the outside looking in is if Opie has another state championship-caliber team on his hands like he has the last three seasons.

“I never like to say ‘yes,’” Opie said. “I like to approach every season in a humble manner. Every year, I sit there and go, ‘I don’t know.’ You try to evaluate and say, ‘Oh, we’ve lost six seniors.’ But every year, we’ve lost a bunch of seniors, and that’s more pronounced in 8-man.

The Norse open the season Thursday, Aug. 25, at Grand Rapids NorthPointe Christian and then at Forest Area just six days later before their first home game on Sept. 9 against Brethren.

They are riding a string of 29 consecutive regular-season wins. The last time Suttons Bay lost in a non-playoff game was nearly four years ago — Sept. 14 to Wyoming Tri-Unity Christian in a 38-27 final.

“There’s definitely pressure,” Barnowski said. “Coach already talked about that. He goes, ‘Do you want to be the first team to lose it?’ And as a senior, we don’t want to be the team to fold and let somebody beat us in the regular season.

“It’s pressure, but it’s also fun. We get to be a powerhouse team.”

That reputation is something Barnowski and Bramer want to keep going. They don’t want to see it end their senior year.

“I’m just going to work hard in my last season, and hopefully it all comes out our team’s way,” Bramer said. “But if it doesn’t, I just want to know that I worked hard, that our team worked hard, and that we had fun out there.”

Bramer said he already loves the atmosphere surrounding the team.

“We have a lot of fun, but we also work hard,” he said. “Everyone gets along, which builds our teamwork and communication when we’re out there playing games.”

As the start of the season approaches, Opie knows football goes beyond the wins and losses. The head coach simply wants the best for the young men under his care.

“I would love every team to be undefeated. I would love every team to go to states and have that experience. It’s an amazing experience, and some of these kids have had it twice,” Opie said. “I’m really happy we’ve been able to give them that gift and they’ve given themselves that gift, but every year I just want them to come out, work through adversity and be really good at what they do. If at the end of the day we lose because of it, it is what it is and life goes on tomorrow.”