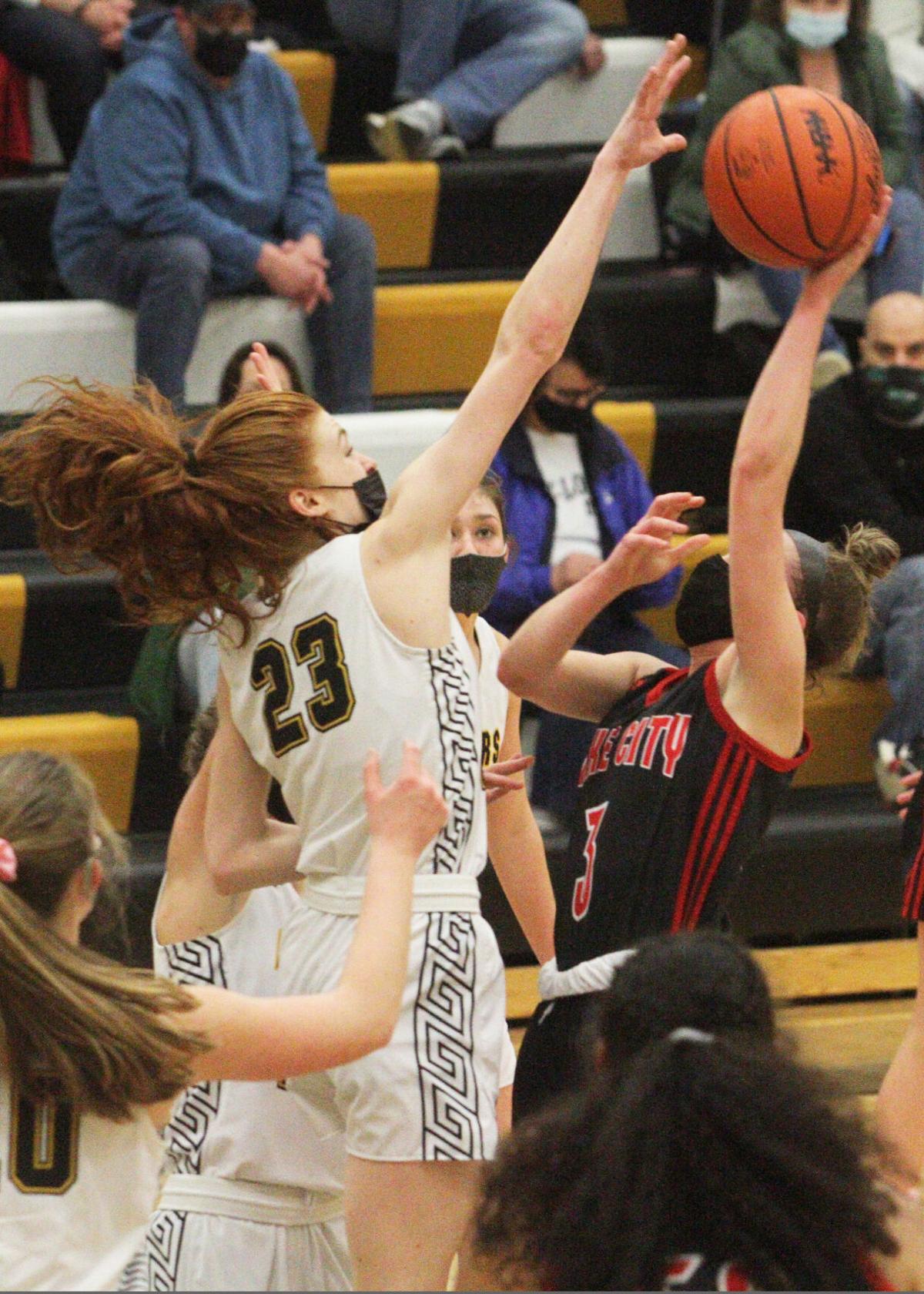 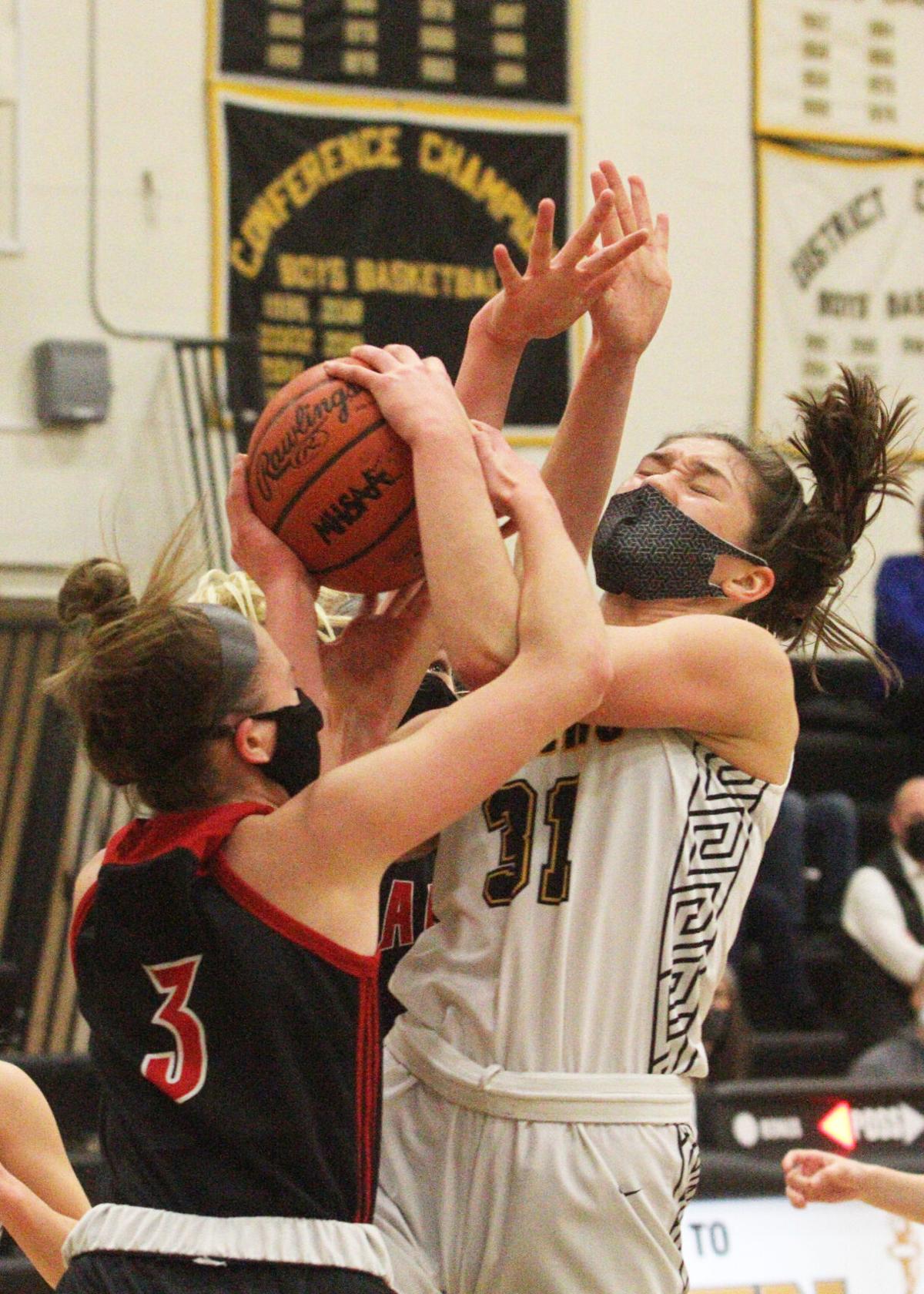 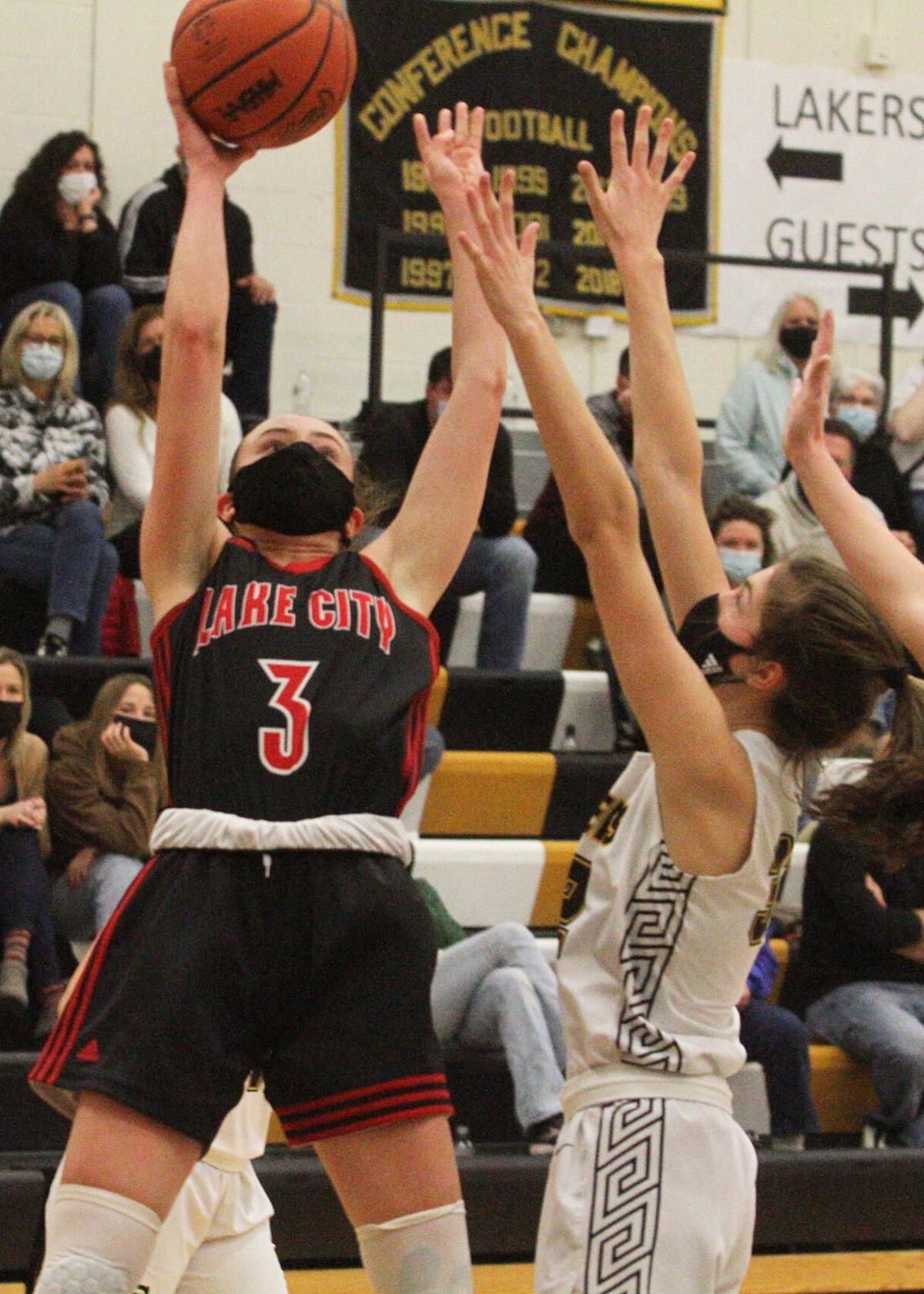 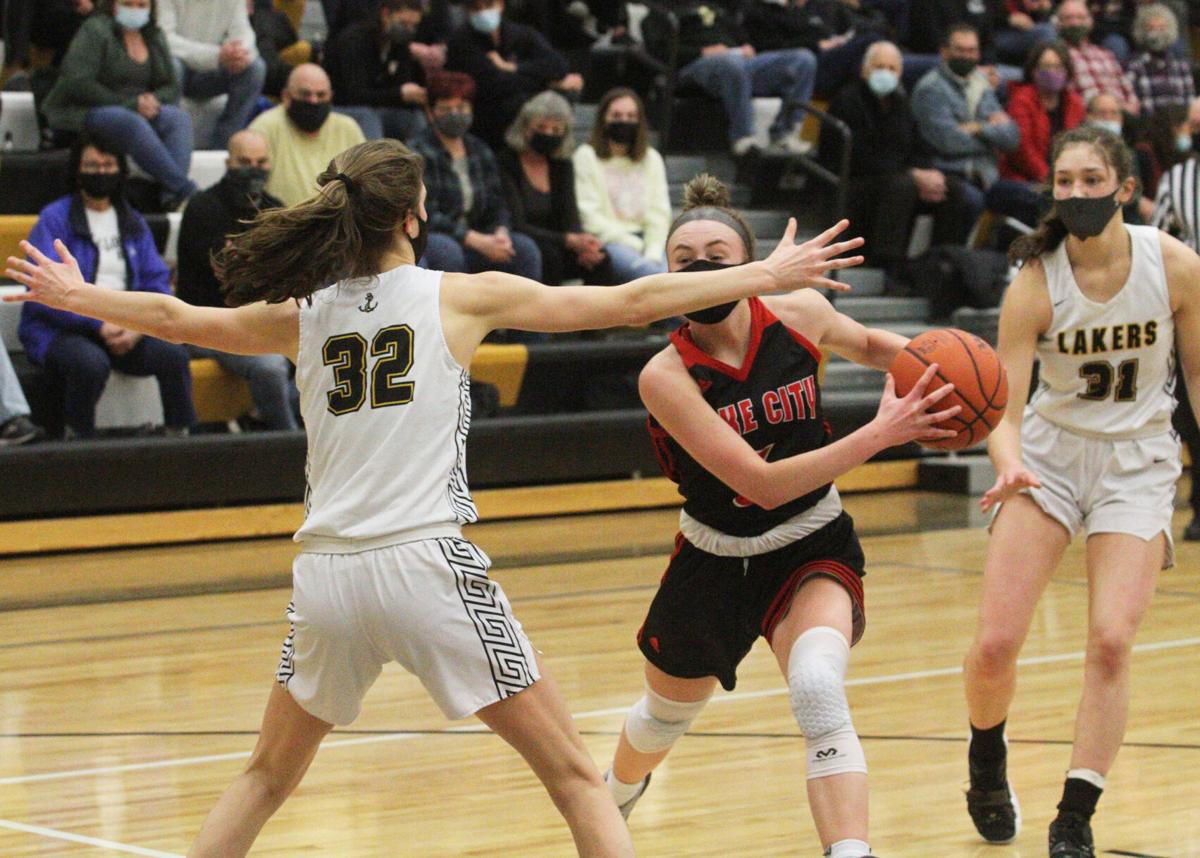 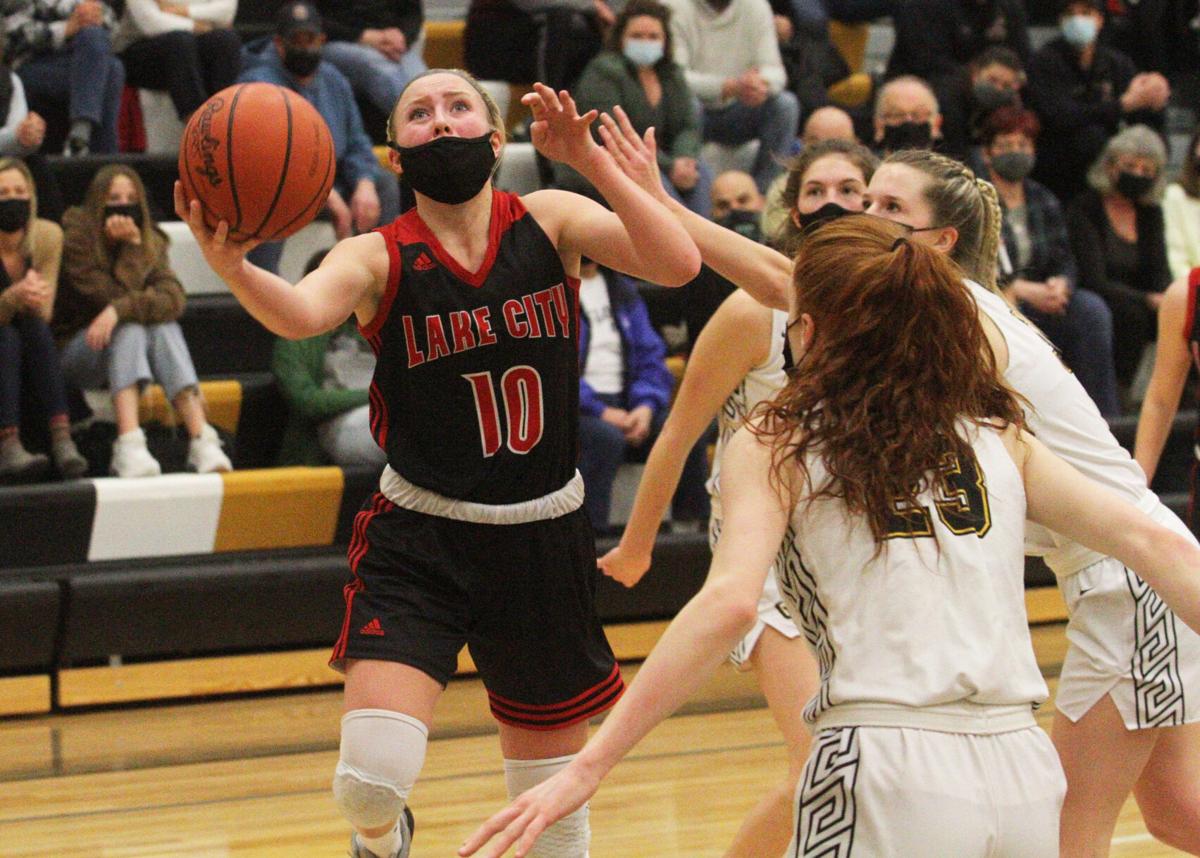 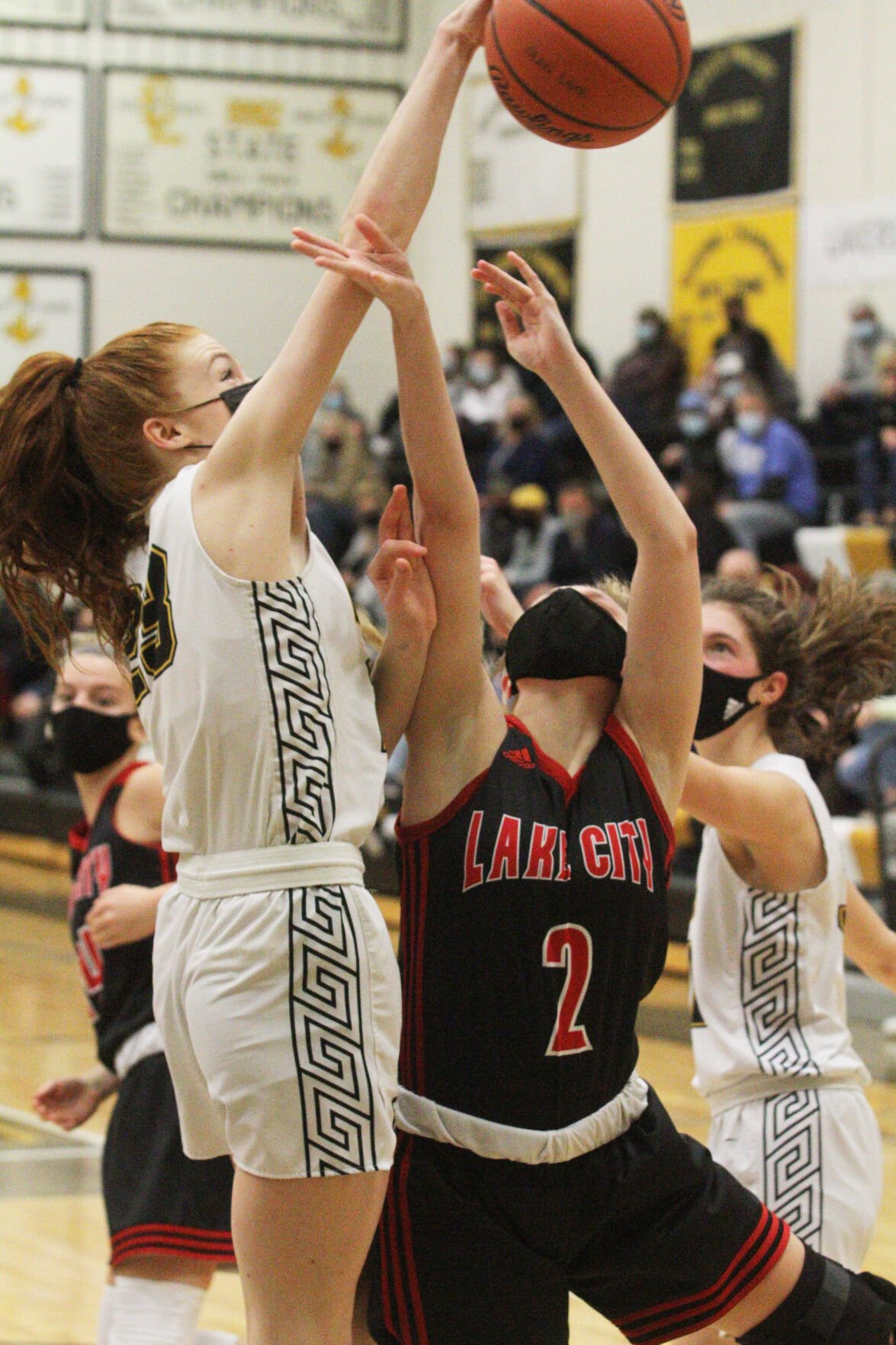 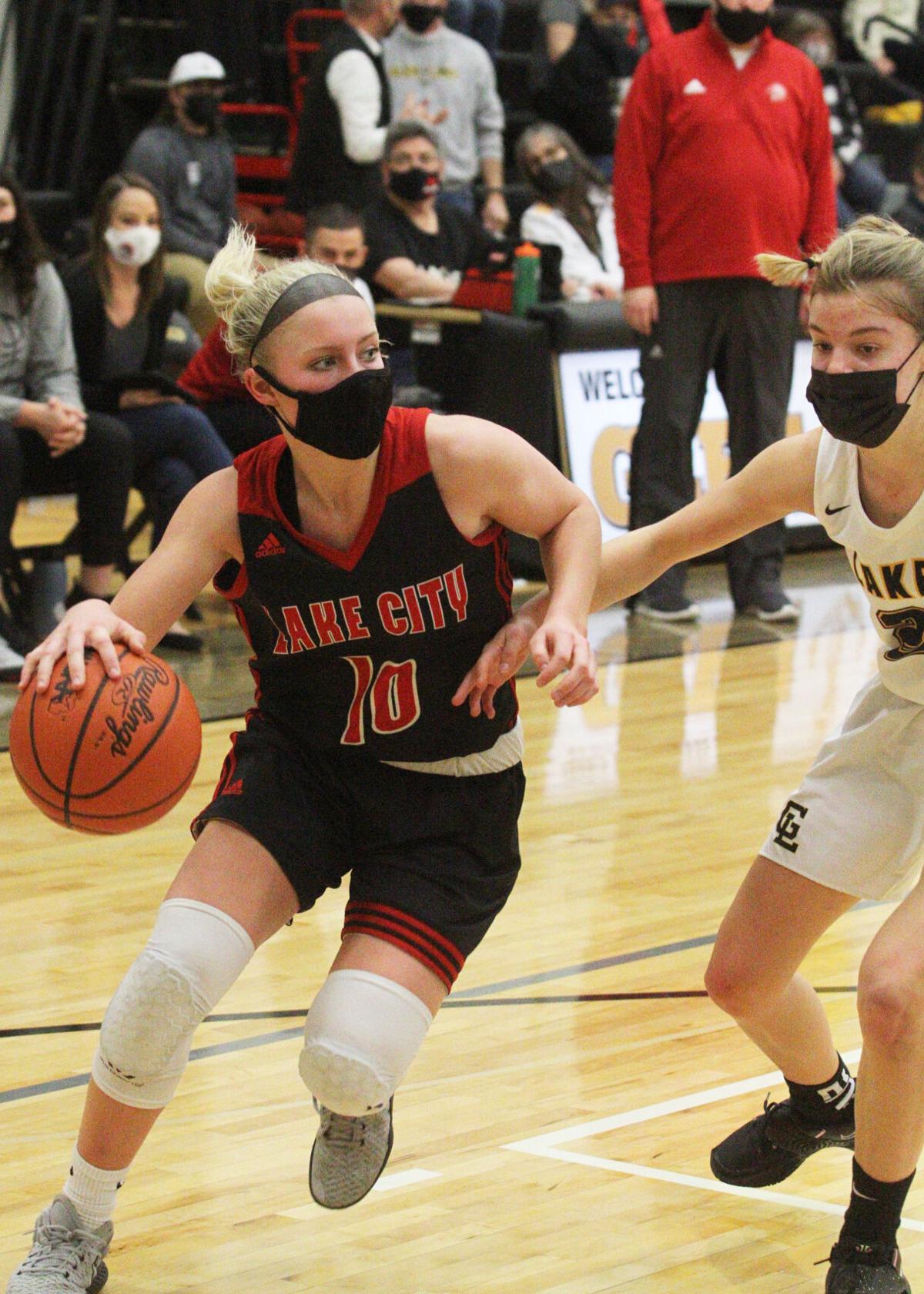 MAPLE CITY — Teams never really know exactly who they are until their backs are against a wall.

Coaches wonder how their team will react when adversity strikes, especially when they haven’t been in any close games.

The Glen Lake girls basketball team had its first real test of the season Saturday afternoon against Lake City, defeating the Trojans 60-52 at home.

The eight-point victory is the smallest of the Lakers’ 13 wins — each of the other 12 came by 25 points or more — and gave them a chance to perform under pressure.

“Going into this we knew it was going to be a tough game,” Lakers senior Hailey Helling said. “We just pride it on our defense and pushing the ball, playing as a team and just coming out with composure.”

Glen Lake was as composed as ever to begin Friday night as Grace Bradford nailed a 3-pointer on the team’s first possession and it looked like the Lakers would be off to the races. Grace Fosmore would add another 3-pointer on the Lakers’ next time down the court en route to a 12-4 start for her team.

A 10-point first quarter Lakers lead was trimmed to nine by the end of the first half as the Trojans’ senior Olivia Bellows began to heat up, tallying nine points before the break.

Bellows hit two free throws to cut the lead to six just before the half but Glen Lake’s Jessica Robbins drained a buzzer-beating 3-pointer to stretch it to 27-18 at half.

The Trojans came into Saturday’s game unbeaten on the season and Bellows came out in the second half with intentions of keeping it that way.

A quick layup from Bellows began the third, then she hit a floater before coming back down the floor to sink an and-one layup that saw the free throw fall.

Bradford answered with a bucket but Bellows could not be stopped.

The Trojans’ senior hit another two 3-pointers over the course of two minutes and all of a sudden the Lakers only led by four, 35-31.

The Lakers took a timeout to regroup and flipped into a zone defense that turned Lake City and Bellows on their heads. Glen Lake took no time to flip the switch on the Trojans and break off a 17-4 run that spanned the third and fourth quarters and left Lake City down 17 points.

“Our biggest adjustment was going into zone and that way we could double her (Bellows) and get her down because she’s a tough girl to guard,” Helling said. “We just had that fire under us and just went out there and gave it our all.”

Chloe Bisballe ended the third with a basket for Lake City to break up the run that ended with just over four minutes to play. The Trojans began a miraculous comeback that saw three straight 3-pointers followed by two and-one calls that put the pressure back on Glen Lake to win the game.

Ruby Hogan and Helling hit free throws down the stretch that kept the Lakers at arms distance but Mackenzie Bisballe kept firing.

“I’m proud of the way we fought,” Lake City head coach Bill Tisron said. “We got way more out of this today than beating a team by 50 points. We never gave up when we could have easily packed it in down 17. No one was sad. No one had heads down, they know that this was a good one for us all the way around.”

The late season non-conference competition is just heating up for Glen Lake as they will end the regular season with Cadillac.

“Flip the switch is kind of the saying we have been using the last two games,” Lakers head coach Jason Bradford said. “What does it take to flip that switch and be mentally strong and we talk about entering lion mode.

“Right now it’s about turning that switch and keeping them hungry. We know what we need to work on from seeing that and get to work this week and build off this Friday.”