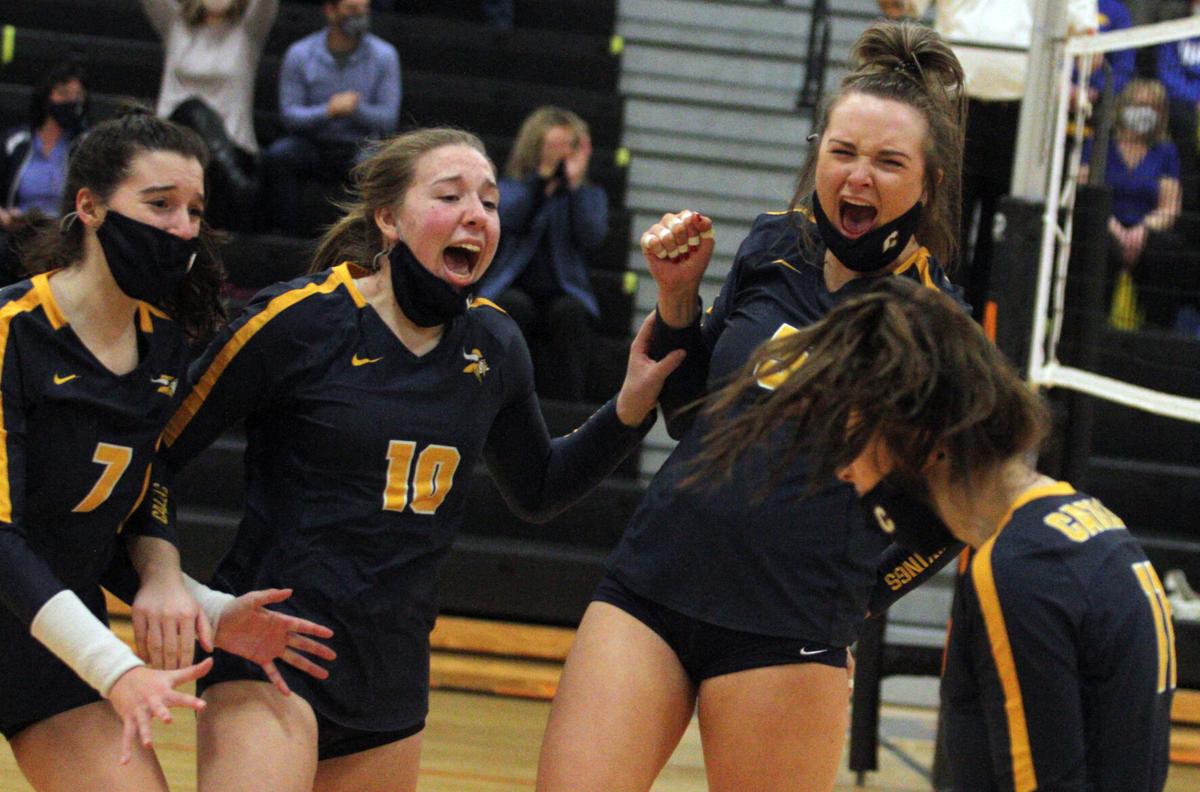 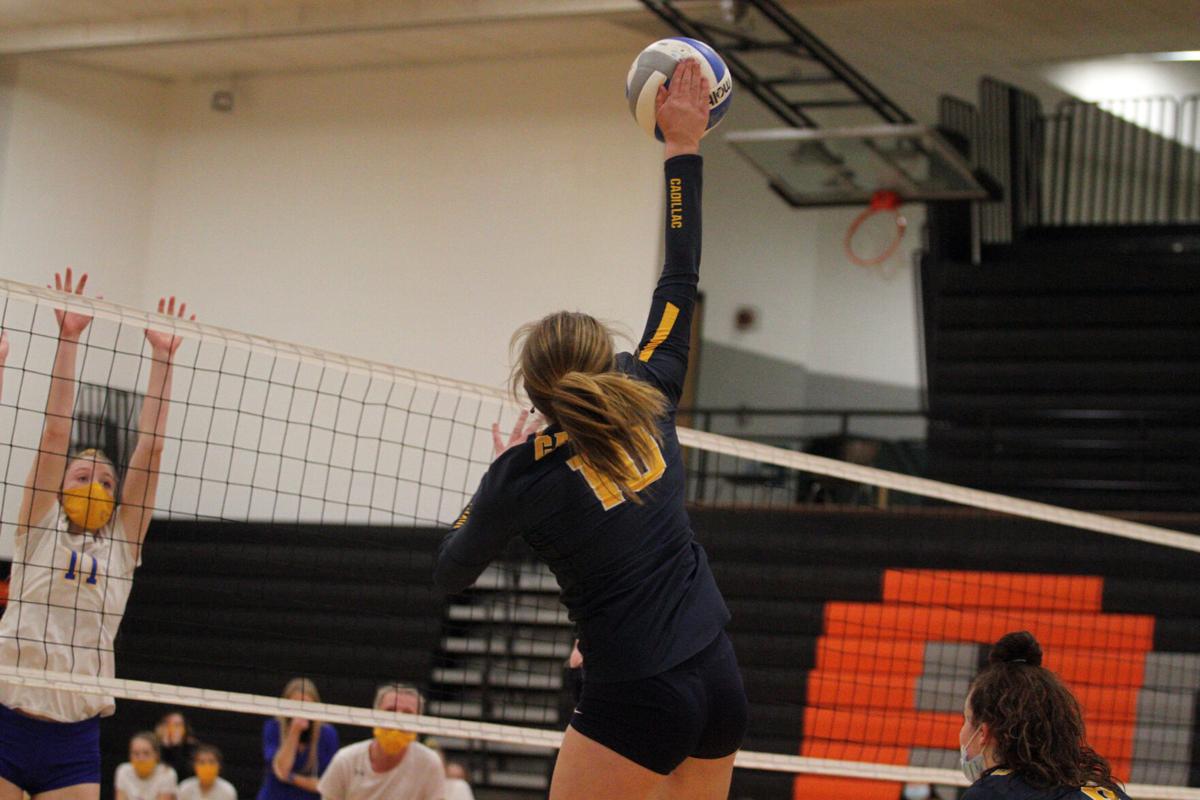 Cadillac's Joslyn Seeley (10) put a dent in the volleyball during a hit in Tuesday's Division 2 quarterfinal at Alma. 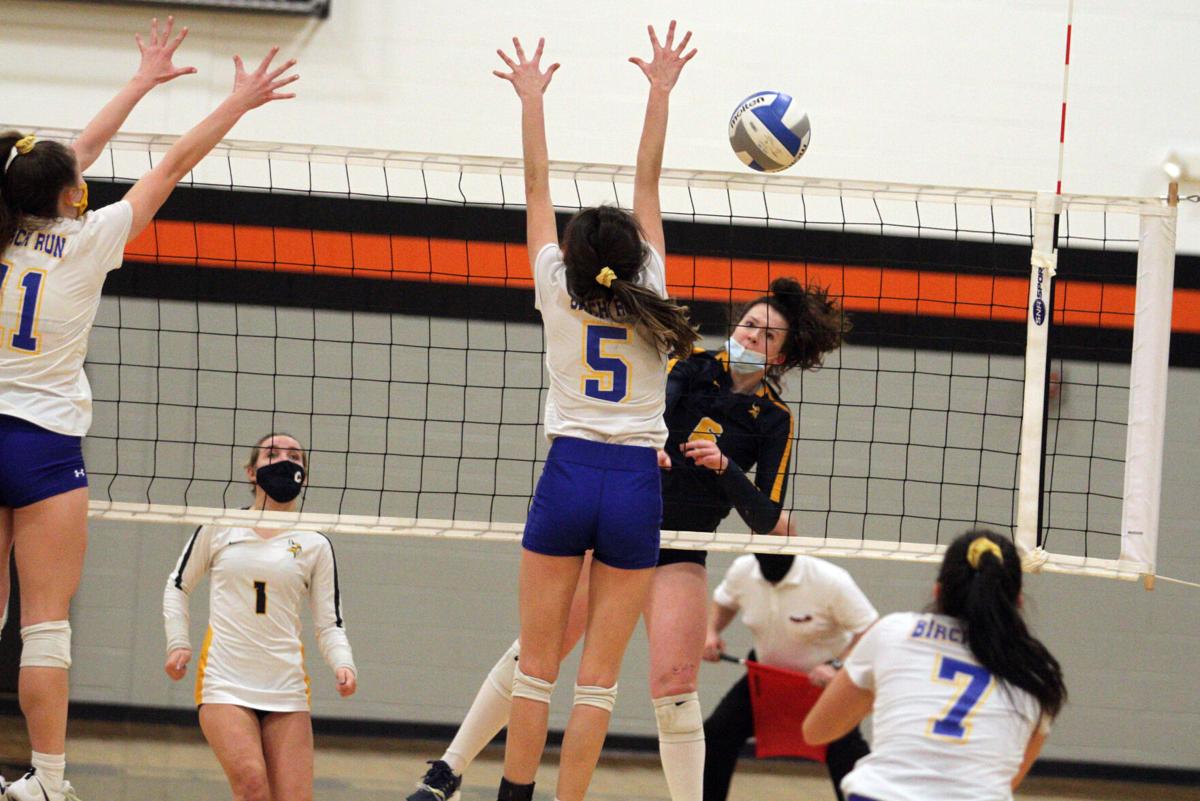 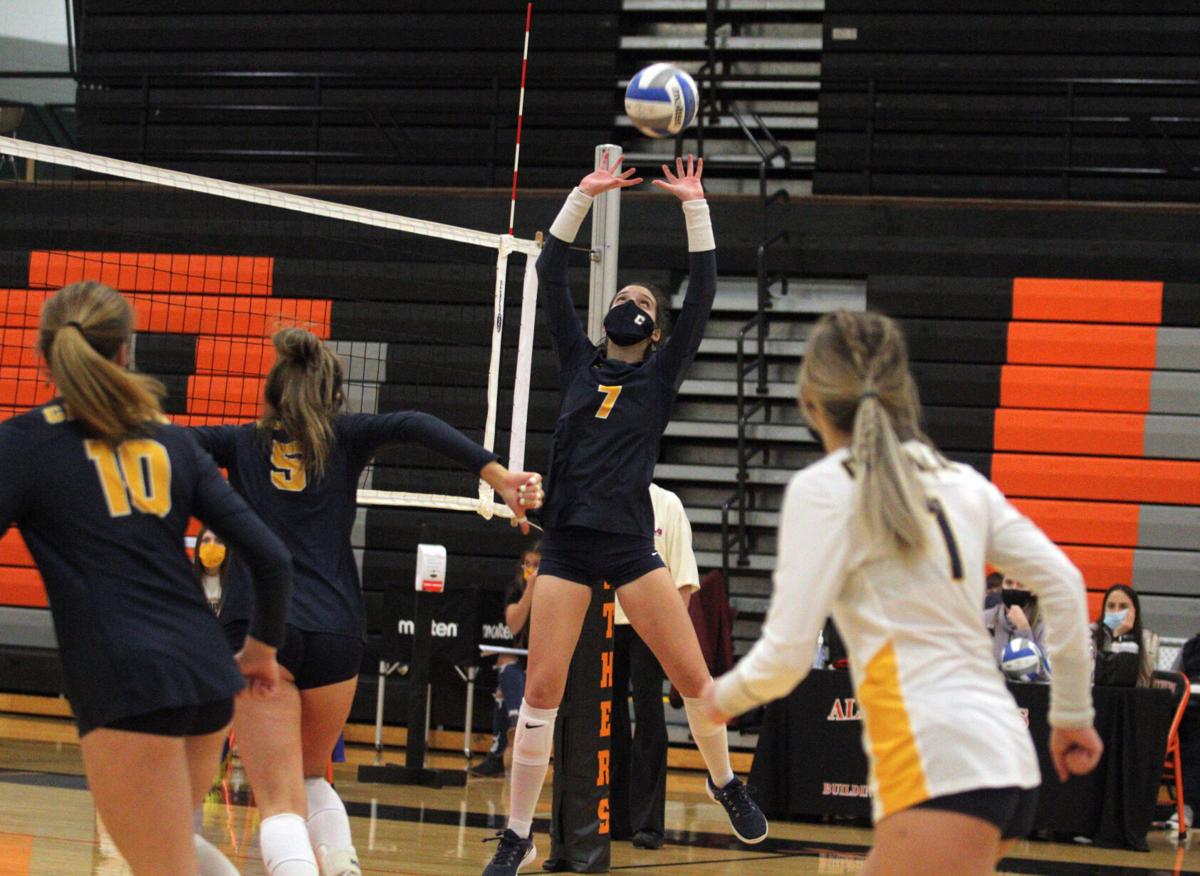 Cadillac's Renee Brines (7) sets up a teammate in Tuesday's Division 2 quarterfinal at Alma.

Cadillac's Joslyn Seeley (10) put a dent in the volleyball during a hit in Tuesday's Division 2 quarterfinal at Alma.

Cadillac's Renee Brines (7) sets up a teammate in Tuesday's Division 2 quarterfinal at Alma.

Cadillac kept the volleyball team’s stats on a clipboard from the county home to the state championships, then gave it a workout by coming back from a 0-2 deficit to defeat Birch Run in five sets tn Tuesday’s Division 2 quarterfinal at Alma High School, 24-26, 15-25, 25-20, 25-19, 15-7.

The clipboard says, “It’s Battle Creek & So Much More.”

Well, the No. 3-ranked Vikings booked a trip there and get to look forward to more in Thursday’s state semifinals against top-ranked Grand Rapids Christian.

“I think we realized that we really were the better team and that we needed to reach our full potential,” senior libero Julia Jezak said. “Because we were playing terrible.”

That could be in part because of a 60-day COVID-induced layoff in between the regional finals Nov. 12 and Tuesday’s resumption of the state postseason. The Vikings were also without starting middle blocker Carissa Musta, who is in quarantine after a family member tested positive for COVID-19. Junior Madyson Smith started in Musta’s place and ended up with a kill and a block.

Birch Run (37-6) won the first two sets, 26-24 and then a more convincing 25-15, leaving the Vikings facing a huge deficit. The Panthers also led 20-17 in the third set, with Cadillac staring at elimination in five points.

“We’re down 20-17 in the third, but you know what? They buckled down,” Vikings head coach Michelle Brines said. “Brooke (Ellens) made a great play over here in the corner, and that kind of sparked us.”

Ellens’ save led to an 8-0 run to close out the third game, with Renee Brines finishing it off with a tip over the Panther defense.

“We knew we weren’t playing well and there was a lot of things we had to fix,” said Cadillac senior outside hitter Macy Brown, who led the team with 32 kills. “But it was our first match in two months. After the second set we just came together and said, ‘Alright, reset.’ Here we go, these next three, you see it all the time in the tournament; it’s our turn now. We’re gonna get the next three.”

Tied 7-7 in the fourth, the Vikings and Panthers traded points almost equally until Cadillac scored four of the last five, outlasting Birch Run on a lengthy final point for a 25-19 win.

The Vikings started fast in the fifth, taking control with a 4-1 lead out of the gates and capitalizing on several Birch Run errors to lead 11-4 and really put the pressure on the team sharing a mascot with the host Alma Panthers.

The gym’s walls were emblazoned with “Welcome to Panther Country” on the end Birch Run faced, but Cadillac wasn’t as welcoming.

“It was terrifying that we were down in the first two sets,” Jezak said. “I had a bad mindset at that point, if I’m being honest. I wasn’t sure if we were going to win. And then after that fourth set, I felt like it really changed. I felt like we could really do it and then I didn’t have any doubts going into the fifth set.”

Michelle Brines said she’s looking forward to replacing her Final Four sweatshirt she bought the last time the Vikings made it to Battle Creek, in 2016. She wore the old one for Monday’s last practice before the quarters.

“I looked at my girls and I said, ‘You see this?’ It was looking pretty nappy. ‘I need a new one,’” Brines said. “They all laughed.”

Brown came onto the court with “yup” written just above her right knee in Sharpie, and “eat” on the left. She said she’s had the mantra written there all week.

The senior-laden Birch Run program saw its first quarterfinal since 1991, with outside hitter Emma McIlhargie going kill for kill with Brown much of the match.

“That’s probably the best comeback I’ve ever been a part of,” Brines said. “I mean, that was just crazy. That was crazy. We were on the ropes big time in the third set. They turned it around.”

MARQUETTE — Defense, defense and more defense. That was the key Saturday as Johannesburg-Lew…

Vikings come back for first ever regional title

Delay lets Glads get captain Piedmonte back for semifinal