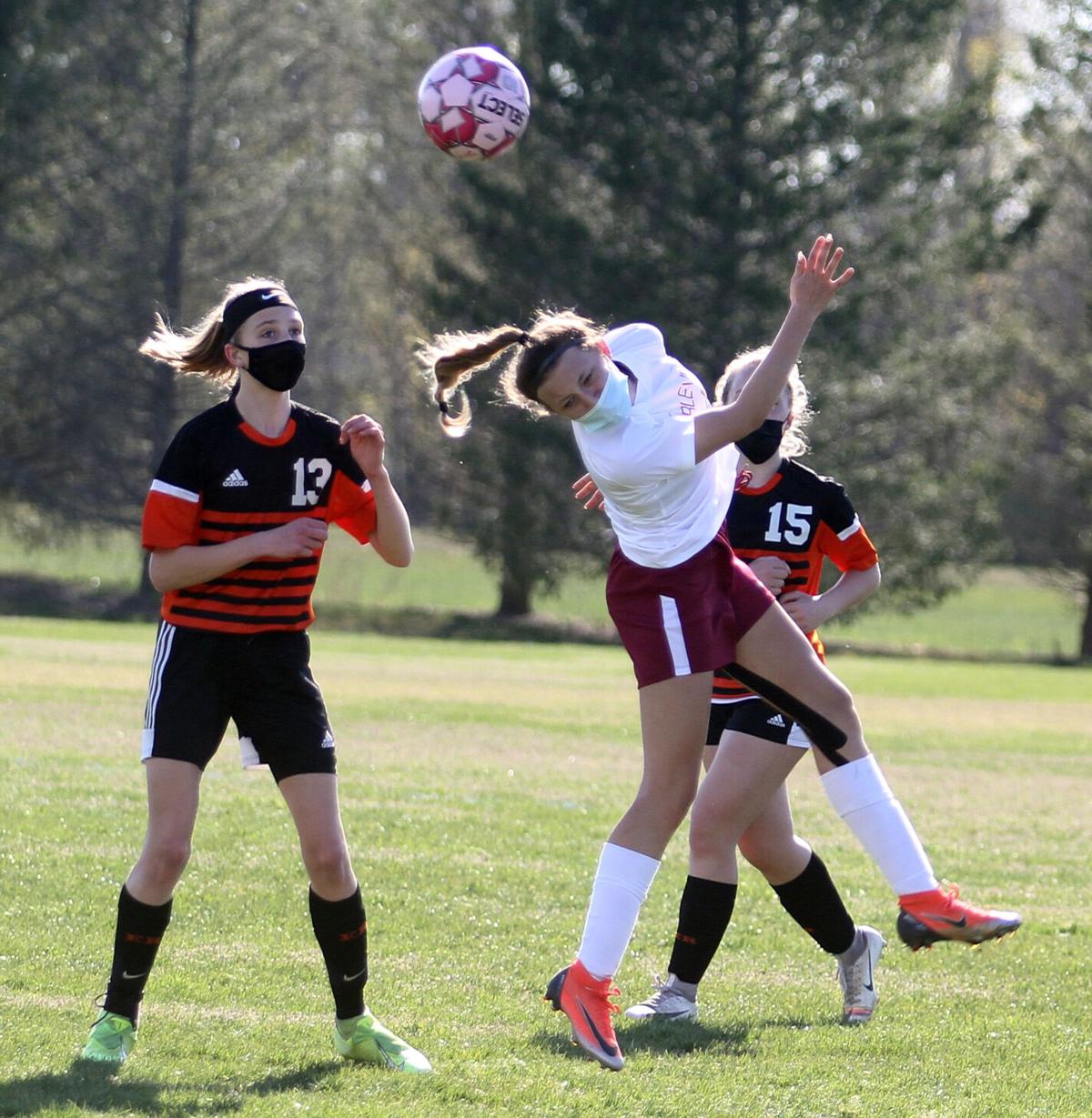 ELK RAPIDS — It’s always a good soccer game when you score more goals than you give up.

Even better when you’re the goalie.

“It’s pretty exciting,” the sophomore netminder said. “I’m a goalkeeper so I don’t get much time on the field at all, so to be able to do something like that, it’s a little fun moment for me.”

Elk Rapids led 2-0 at halftime, with Gabby Krakow opening the scoring on a left-footed goal from outside the box in the 27th minute. The Elks hit the crossbar 30 seconds later, but made it 2-0 on Gwen Carroll’s goal 4:23 before intermission. Sara Sanchez Gomez picked up an assist on Carroll’s score.

Charlevoix came out and controlled the ball much more early in the game, generating several opportunities in the first 15 minutes. But the rest of the game primarily ended up on their side.

“Elk beat us to the ball,” Charlevoix head coach Pete Scholten said. “That was probably the biggest observation. We need to be quicker to the ball, and I think we need to play more calmly. Hats off to them; they’re a very good team and they apply pressure. We were too quick to just boot the ball and not settle down and get passing wide. They’ve got a fast defense, too.”

The Rayders played many of their first five games without multiple players from quarantines, but had everyone back Thursday. One issue, Scholten said, is they hadn’t all played together before.

“At halftime, I encouraged the girls to go the ball, quit watching, quit sending it back to where it came from and use our switcher field, not be afraid to play it back to defense or the keeper and play it to the flanks,” Elks head coach Andrea Krakow said. “You use the width of the field to try to draw the defense out and then send it back in. Second half, they did that.”

Seven minutes into the second half, Charlevoix made a change at goalie, pulling Claire Scholten in favor of freshman Addison Boop. Claire Scholten re-entered the game two minutes later after changing out of her goalie jersey in order to add more speed to the midfield.

The defensive play of the game came from Caitlyn Morley, who chased down Charlevoix freshman Karlee Eaton from behind after a long serve found the freshman behind the Elk defense. That stop quickly transitioned into a Bingham goal to make it 3-0 with 23:53 left.

“We were expecting it to be a really close game,” Bingham said. “They were pretty good competition, but we scored in the end.”

Bingham stepped into a big role right away in her first varsity season after her freshman year was wiped away by coronavirus.

“She plays like she’s played on this field before,” Andrea Krakow said. “It’s fun to watch her.”

Jenema’s PK in the final 30 ticks closed out the scoring after the Elks’ Emma Clark was taken down inside the box.

“Our team definitely connected passes a lot better than the other team,” Jenema said. “When we were able to connect passes we were obviously able to move the ball up the field, instead of how the other team moves the ball by just kicking it straight over our heads.”

“I figured it would be close and competitive,” Andrea Krakow said. “I think it was. The score doesn’t always reflect the competitive nature of the game.”

Both teams turn around and play again Friday. Elk Rapids travels to Leland and the Rayders visit North Bay.