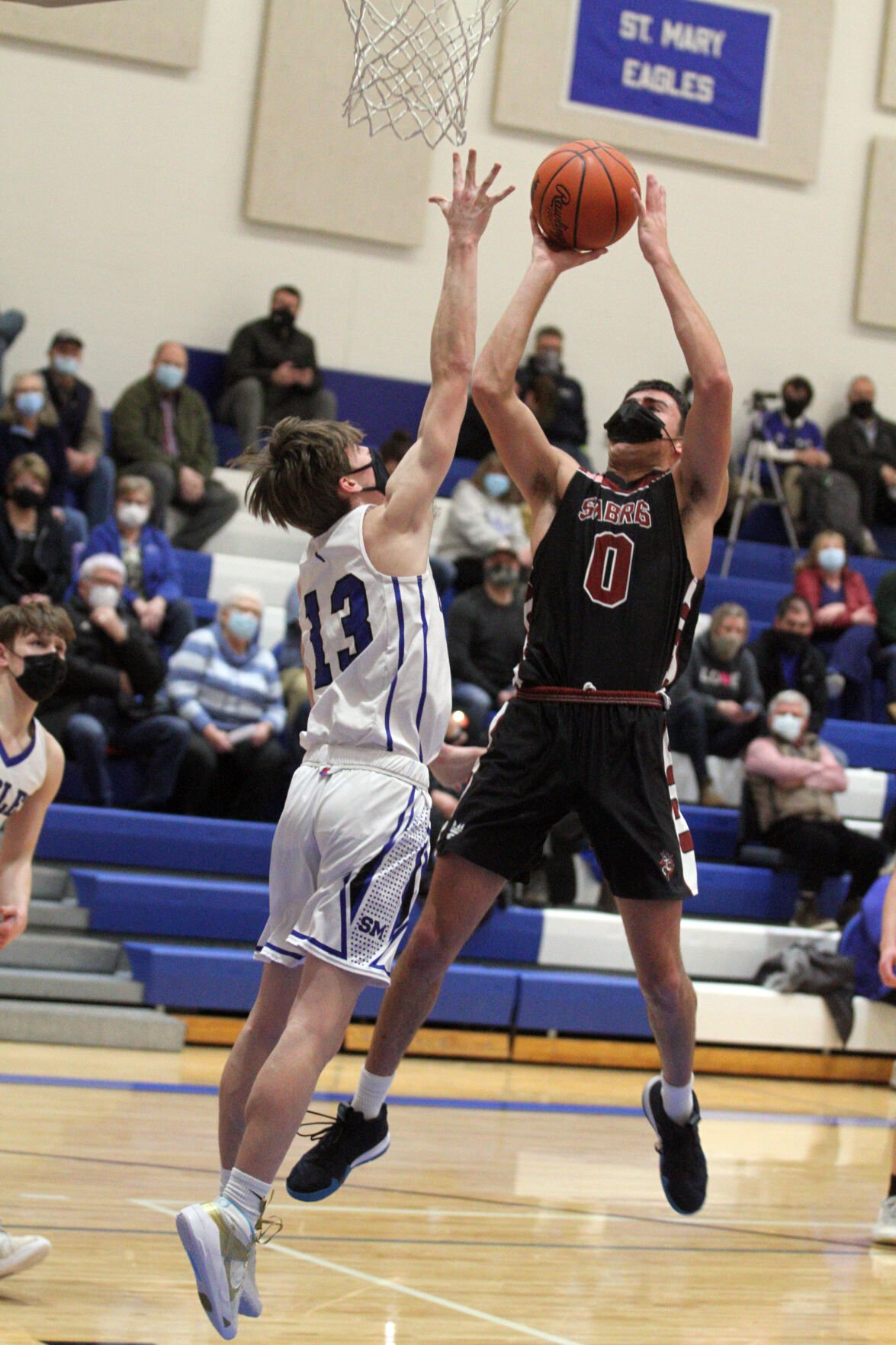 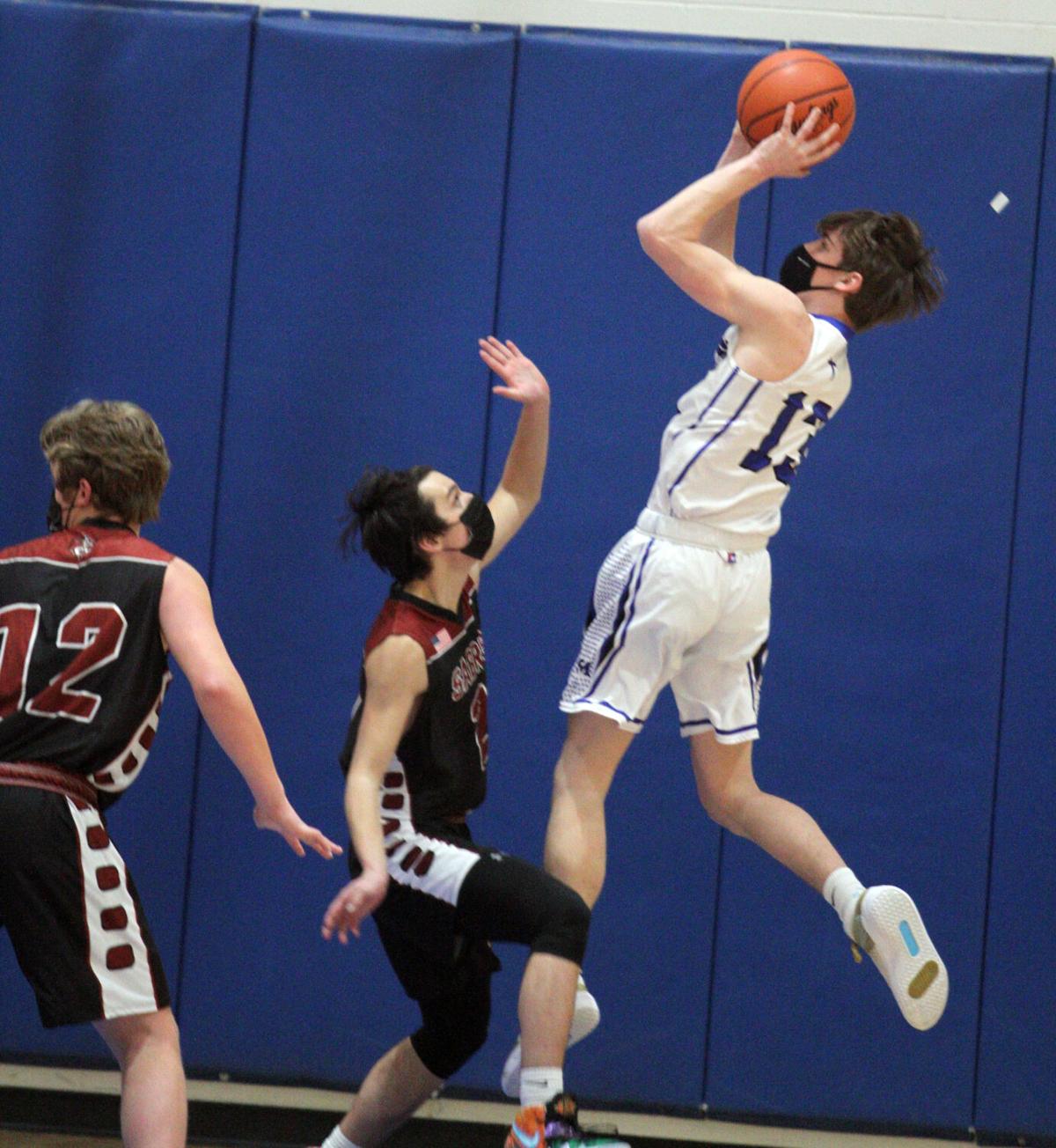 LAKE LEELANAU — When the national anthem wouldn’t play more than a few notes on his phone, Lake Leelanau St. Mary athletic director Nick Papes improvised and sang the song himself.

The Eagles boys basketball team likewise called an audible, changing up defensive strategy during the intermission to rally from a 10-point halftime deficit Thursday against Traverse City Christian to win 69-61.

St. Mary sophomore Dylan Barnowski scored a game-high 32 points, including 15 in the fourth quarter. He hit all six free throws he attempted (all in the final stanza) and scored at least five points in each quarter.

“Pounding it inside really worked for us,” Barnowski said. “We were bigger. We were more physical than them in the second half. The first half, we struggled a little bit, but the second half we really picked up intensity and that’s what helped us out a lot. The two-man game inside out, that really worked well. The dribble drives, kicks, everything.”

TC Christian (3-1) knocked down five 3-pointers in the first half to stake itself a 39-29 lead. Then the long-range shots dried up in a nine-point third quarter as the Sabres lead wilted to four going into the fourth. Two Barnowski free throws gave St. Mary (3-1) a 54-52 advantage with 4:45 remaining, the Eagles’ first lead since a Jacob Schaub 3-pointer put them ahead 16-14 in a wild first quarter that witnessed nine lead changes or ties in a span of 4:38.

“They definitely have some good athletes and they run a good system,” TC Christian head coach Aric Woughter said. “Our weakness is down low, and they definitely made a point to take advantage of that in the second half. I think our flow wasn’t as good as it was in the first half, either. We were moving the ball much better, getting better looks. They clamped down their defense after half time, too. All the credit in the world to them, they came out and made the adjustments and just never quit. They just kept fighting.”

The two teams face off again next Thursday at TC Christian.

“Looking forward to next Thursday,” Woughter said. “We’re definitely going to get back to the drawing board and work on some things.”

In the meantime, the Sabres travel Saturday to Mesick and host the Traverse City Bulldogs on Tuesday. The Eagles travel to Forest Area on Saturday and Brethren on Wednesday as part of a four-game road trip.

“That’s a darn good team, too,” St. Mary head coach Matt Barnowski said of TC Christian. “They’re really good. We knew that they had a chip on their shoulder from districts last year and districts from the year before, so we knew it was gonna be a dogfight, no doubt.”

Coming off a 14-win season that featured three victories against the Sabres, Lake Leelanau aims to take up right where it left off last season.

St. Mary would have faced Leland for a shot at the school’s first district championship since 1973. The Eagles target that title and hope to go even farther and claim the program’s first regional crown since 1950.

Lake Leelanau picked up numerous Northwest Conference girls games, filling in as a sort for proxy for Buckley, which opted out of the season because of low numbers. The Eagles boys likewise face a bunch of NWC teams as well as their old Cherryland Conference foes in TC Christian and Grand Traverse Academy.

The Eagles’ only loss this season came by eight points against 4-1 Elk Rapids, and LLSM averaged over 70 points a game in its other contests.

“We wanted to contest their shots more, because in the first half they were getting open looks and knocking them down,” Dylan Barnowski said. “And that was killing us.”

HARBOR SPRINGS — Great North Alpine and the rest of the Lake Michigan Conference took advantage of one more tuneup for the state finals.

ALPENA — The trip was worth a goal for about every half hour.