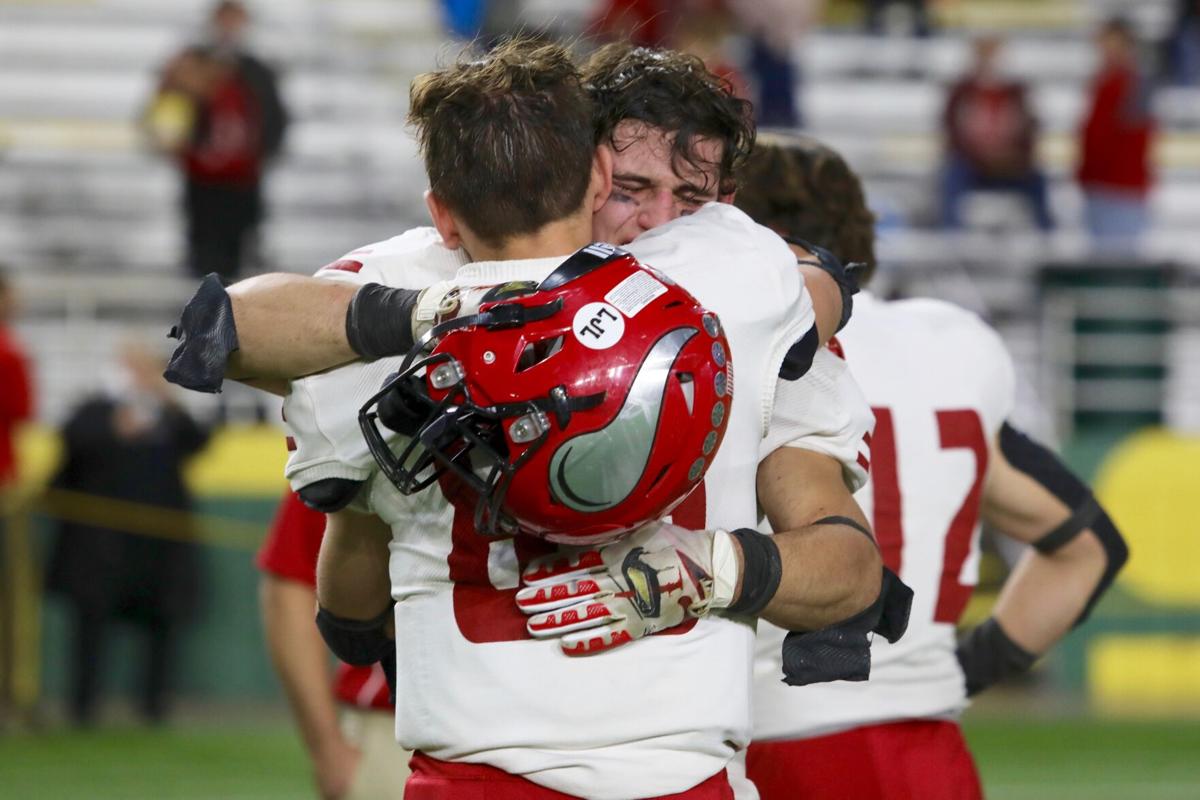 Brayden Opie (85) and Shawn Bramer embrace after Suttons Bay’s 31-20 loss to Adrian Lenawee Christian in the 8-player Division 1 state championship game at the Superior Dome in Marquette on Saturday. 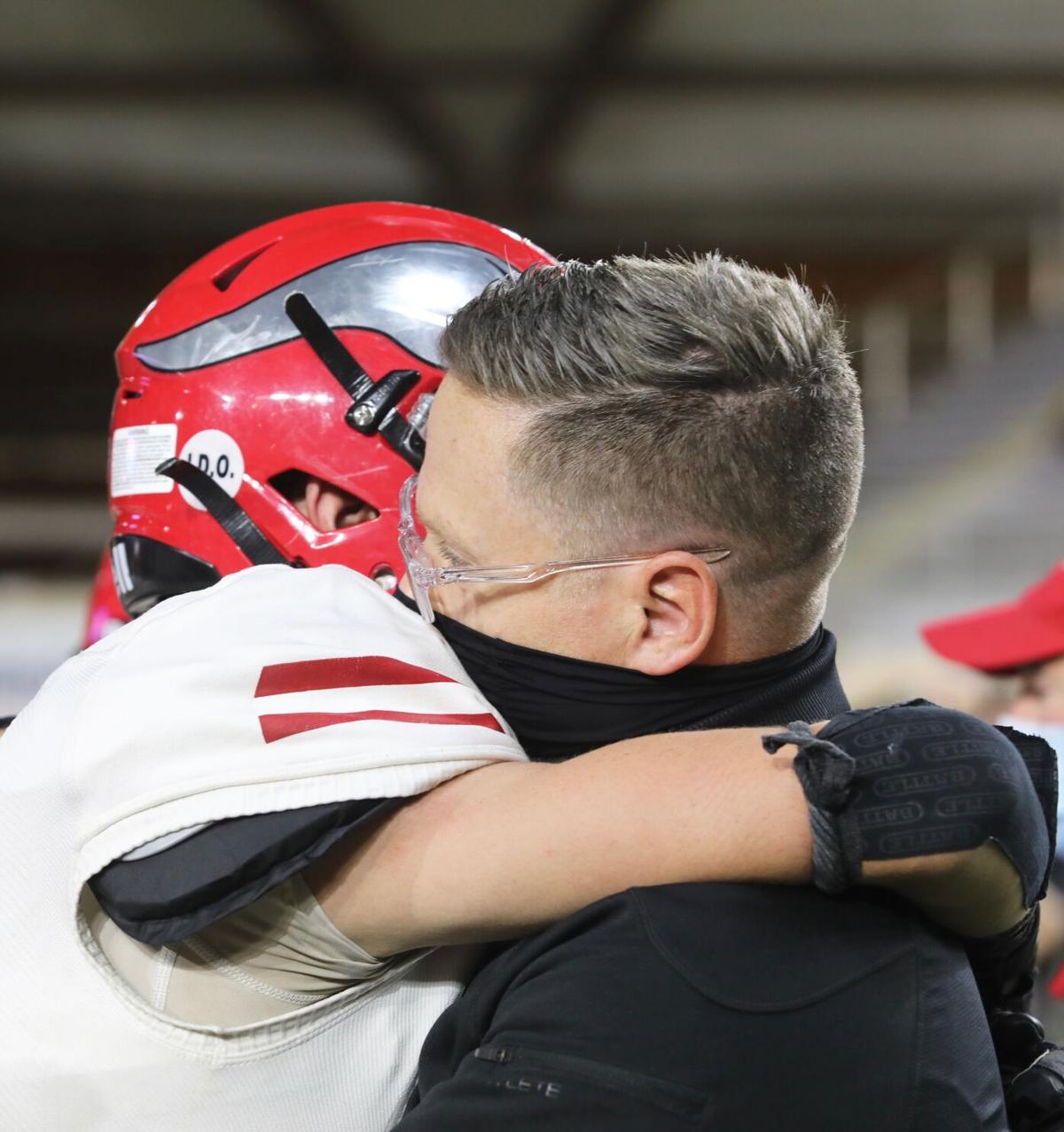 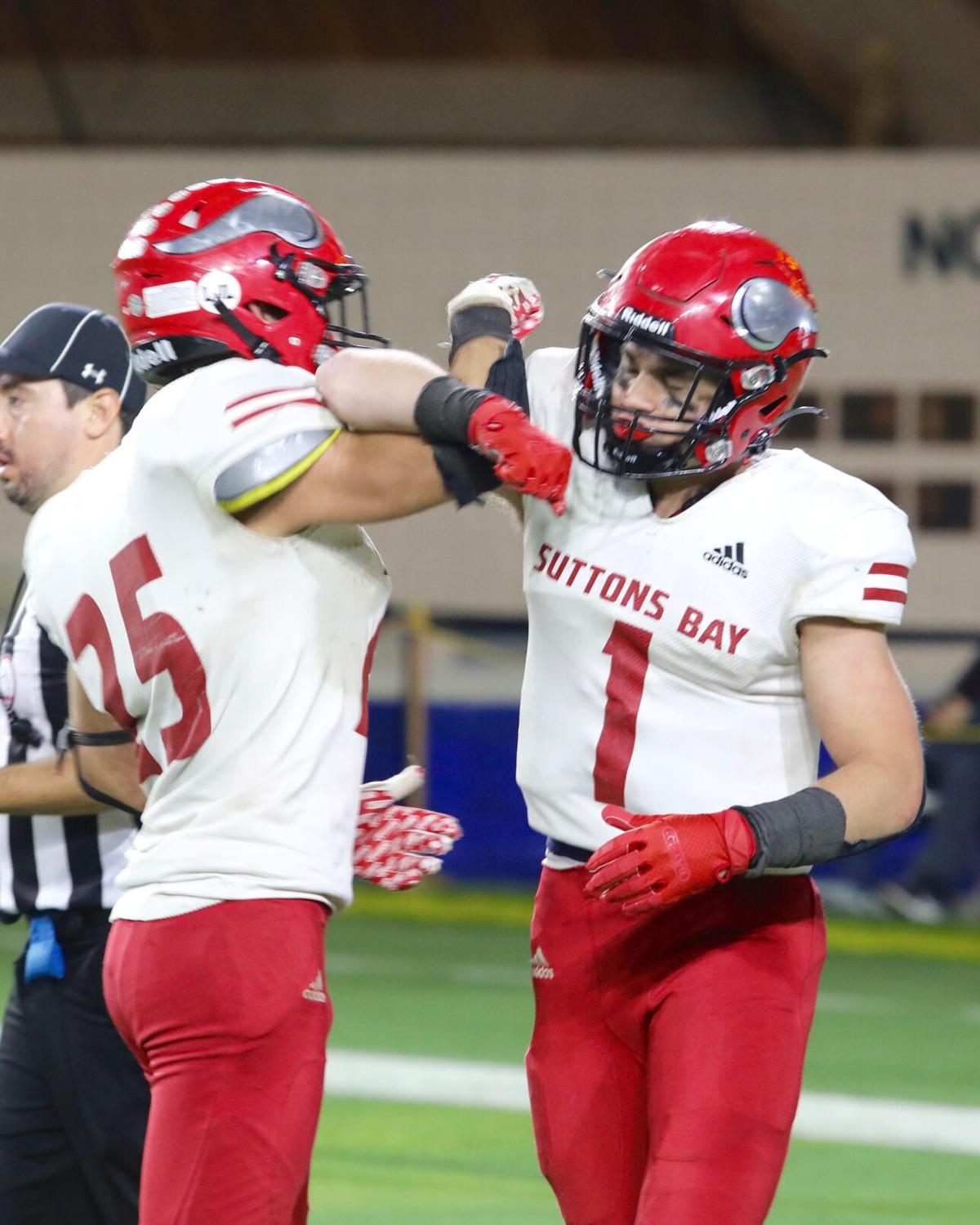 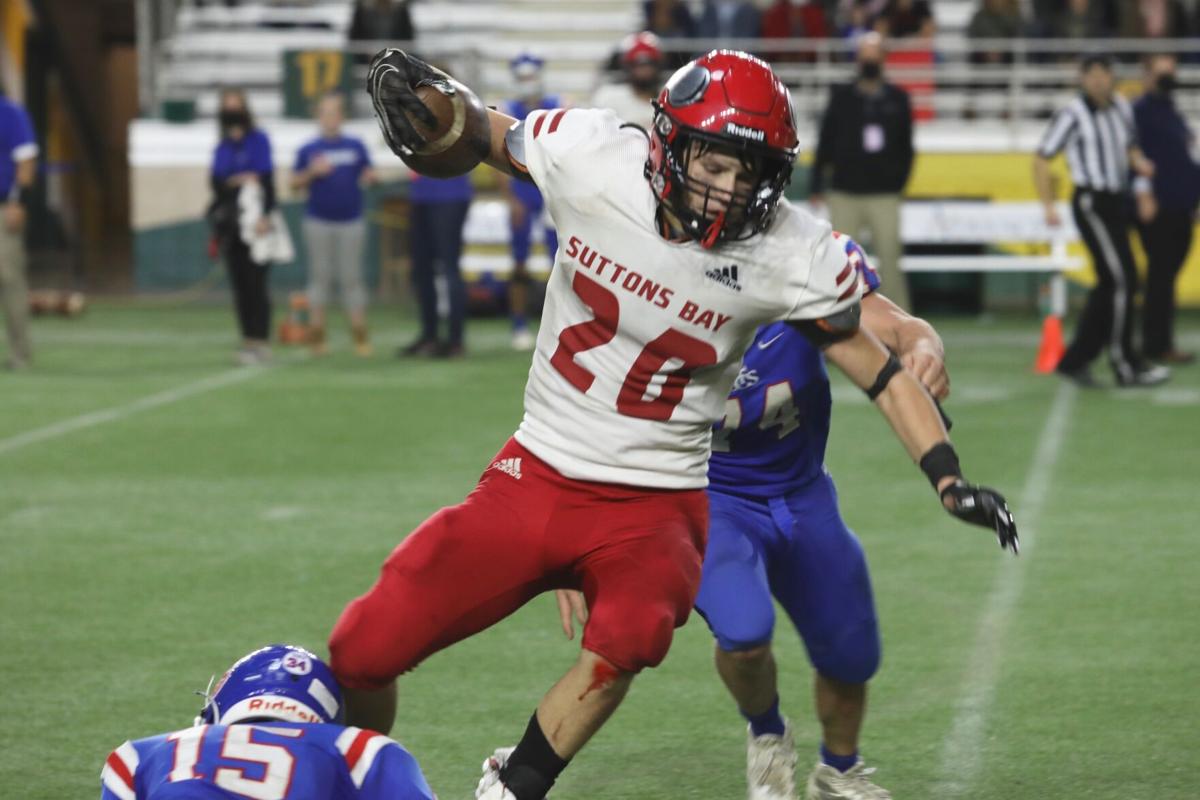 Suttons Bay's August Schaub breaks a tackle in the 8-player Division 1 championship game at the Superior Dome in Marquette. The Norsemen lost to Adrian Lenawee Christian 31-20.

Brayden Opie (85) and Shawn Bramer embrace after Suttons Bay’s 31-20 loss to Adrian Lenawee Christian in the 8-player Division 1 state championship game at the Superior Dome in Marquette on Saturday.

Suttons Bay's August Schaub breaks a tackle in the 8-player Division 1 championship game at the Superior Dome in Marquette. The Norsemen lost to Adrian Lenawee Christian 31-20.

Suttons Bay, for the third straight year, felt the bitter pain of defeat after coming up just short of the pinnacle of a state championship. The Norsemen (12-1) lost a hard-fought battle against No. 2 Adrian Lenawee Christian (13-0), falling 31-20 in the Division 1 eight-player finals at Northern Michigan University’s Superior Dome on Saturday.

“The previous two hurt pretty bad, but this one hurts the most,” Suttons Bay senior Hugh Periard said. “We were so close to pulling this one out. This one’s definitely the worst.”

The Norsemen put up a better fight against the Cougars this year in a rematch of the 2020 state championship game. Lenawee Christian pitched a shutout against Suttons Bay last year, winning 47-0. Suttons Bay lost in the Superior Dome in 2019 as well, 26-14 to Colon.

“Lenawee Christian is a great team. We knew that coming in. Glad we didn’t have a repeat of last year,” Opie said. “We understood walking in the door today that we’d have to fight it out. We knew it was going to be a total grudge match.”

The Norsemen got down early, just like they did in the state semifinal against Rudyard — which Suttons Bay won 42-36 on a Brayden Opie 11-yard walk-off touchdown reception in overtime.

Lenawee Christian’s Ashur Bryja picked off Suttons Bay quarterback Dylan Barnowski and took it into the end zone for a 20-yard touchdown. Suttons Bay turned the ball over on its first three possessions, twice in the red zone at the Cougars’ 16- and 9-yard lines.

A three-and-out from Lenawee Christian resulted in a punt that took a friendly Cougar bounce and backed up Suttons Bay to its own 3-yard line. But the Norsemen were not fazed. Three plays later, Periard broke through for a 90-yard TD run to make it 7-6.

Lenawee Christian drove down the field and looked prime to answer, but August Schaub tipped a pass from Bryja, hauled it in at the 1-yard line and busted down the sideline for a 99-yard score to put the Norsemen up 12-7 with just under five minutes left in the first half.

The Cougars again marched down the field. Suttons Bay was unable to stop them this time around. The quick drive ended in an 11-yard Bryja TD on the QB keeper and a 14-12 lead at the half. Lenawee added a 28-yard field goal in the third quarter and 15-yard Clay Ayers rushing score in the fourth to push the lead to 12 at 24-12.

But the Norse refused to concede the game. Barnowski found Periard deep down the field for an over-the-shoulder 55-yard touchdown strike. The successful two-point conversion made it 24-30, but Bryja’s 33-yard TD run with 1:27 left in the game was the dagger.

Ayers sealed the state title for Lenawee when he intercepted Barnowski inside the 5 on Suttons Bay’s last-ditch effort.

“These guys played their hearts out, and we still have each other. That’s what matters — more than anything,” Garrick Opie said. “They held up extremely well and fought through. They could have given up. ... (They showed) a huge amount of resolve. I’m so proud of these guys.”

Bramer spoke of the Norsemen’s brotherhood after the loss.

“These guys mean so much to me,” Bramer said. “We’ve been able to stick together all the way through and stay close to each other. It’s something I’ll never forget, especially with these guys.”

The Suttons Bay fans showed out big for the game and stayed long after to show their support. Bramer couldn’t thank them enough.

“The community has always been there for us,” he said. “We wanted to win this for them. We just couldn’t pull through today.”

Bills onto finals in 100 backstroke

BATTLE CREEK — McBain took the No. 2-ranked team in the state to the limit.

I am notorious for sleeping through my alarm. Well, alarms is definitely more accurate.