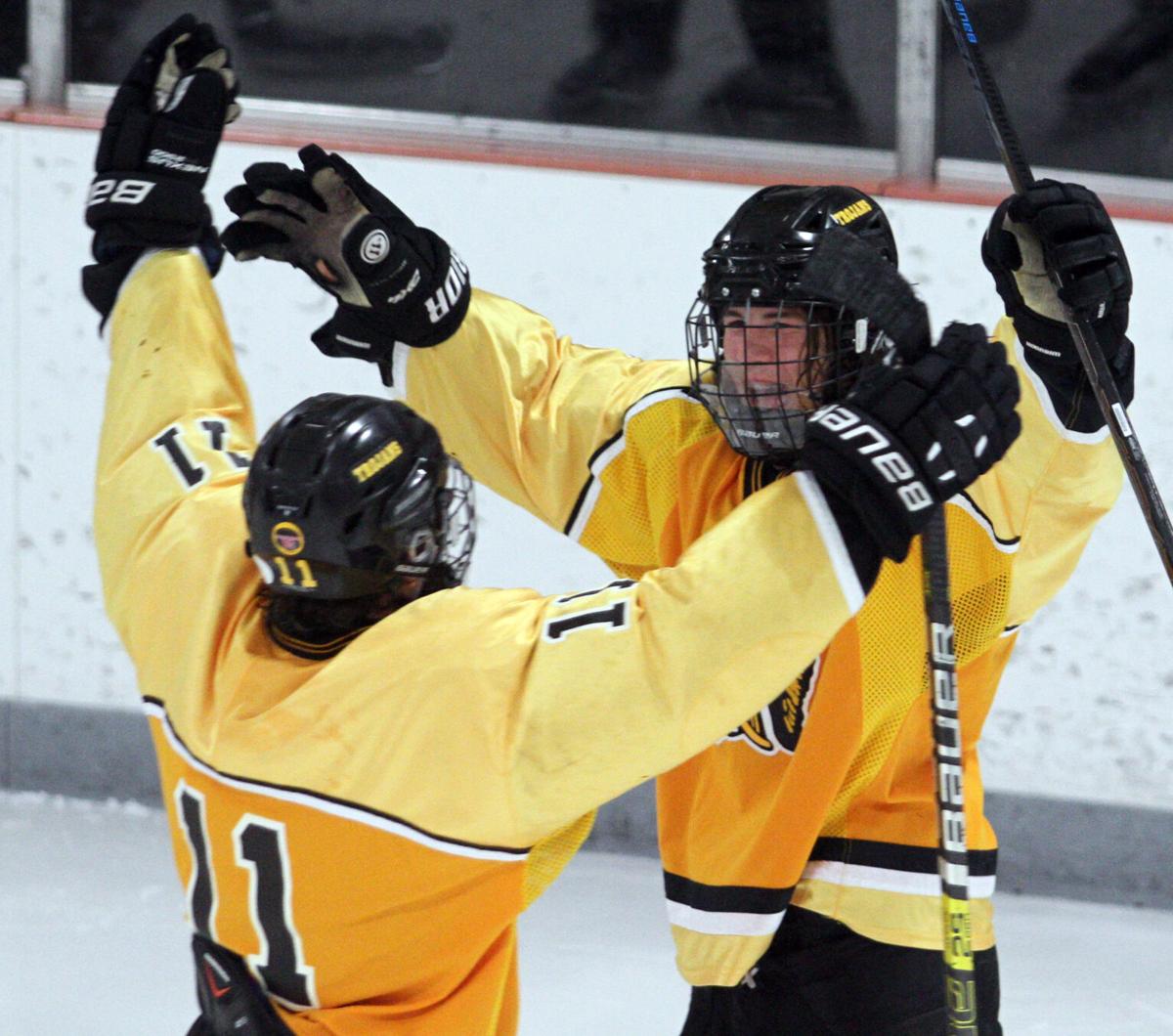 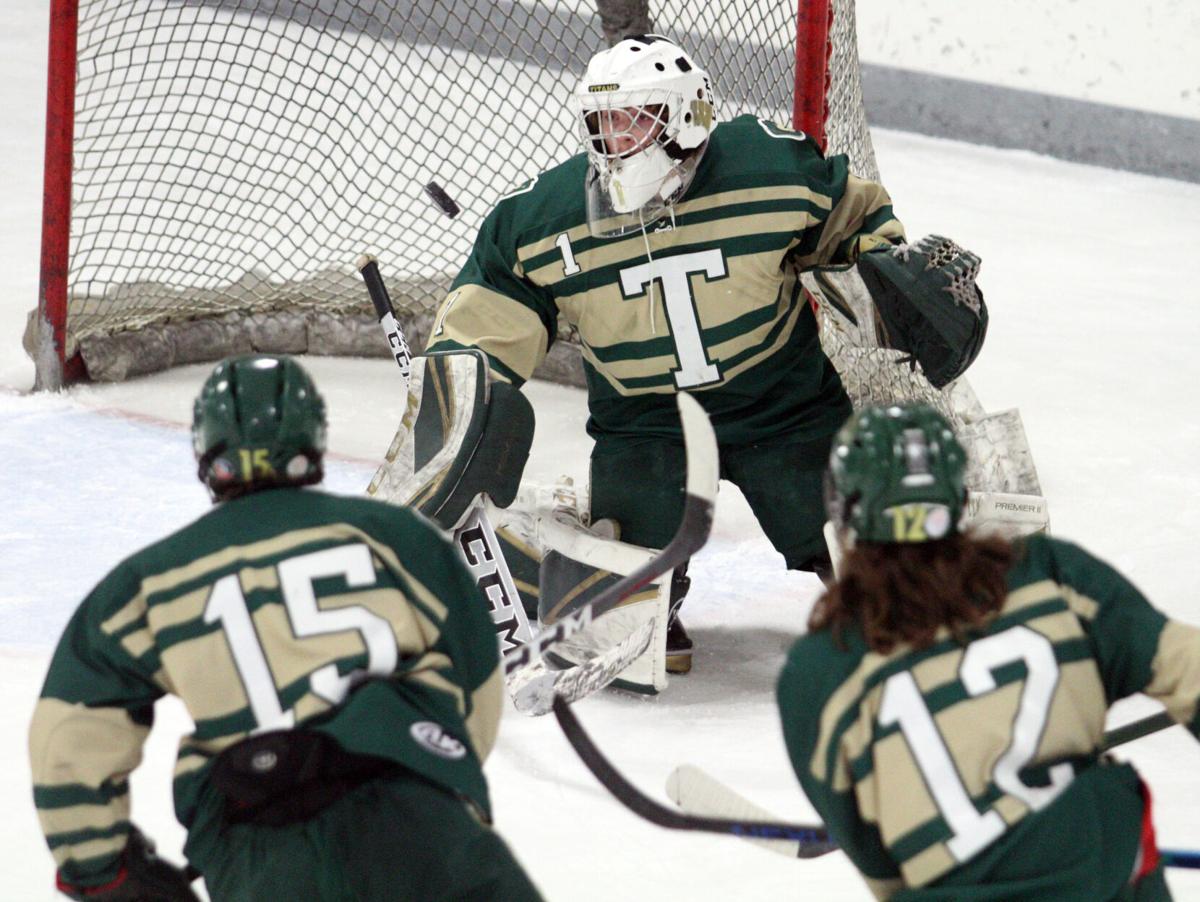 In this photo from March 2021, Traverse City West goaltender Tyler Herzberg (1) keeps his eye on the puck during the McCullough Cup against Traverse City Central as teammates Murphy Kehoe (15) and Abe Starr (12) look on. The 2022 McCullough Cup, which was slated for Wednesday night, was postponed and rescheduled to Feb. 17 because of COVID-19.

In this photo from March 2021, Traverse City West goaltender Tyler Herzberg (1) keeps his eye on the puck during the McCullough Cup against Traverse City Central as teammates Murphy Kehoe (15) and Abe Starr (12) look on. The 2022 McCullough Cup, which was slated for Wednesday night, was postponed and rescheduled to Feb. 17 because of COVID-19.

TRAVERSE CITY — Chris Givens had just stepped off the ice when he felt the familiar buzz of a notification on his cell phone Tuesday.

Granted, it wasn’t nearly the worst kind of bad news, but it was certainly disappointing for a team gearing up to play its intra-city rival in one of the biggest regular-season games of the year Wednesday.

That game — the annual McCullough Cup between Central and Traverse City West — wasn’t going to happen. At least not yet.

Having several players out due to COVID-19 restrictions forced West head coach Jeremy Rintala to reach out to Givens and ask if the game could be rescheduled. Rintala said Givens was “gracious enough” to accept the request, and the game — which has been played every year since 1998 — is now set for Thursday, Feb. 17.

“It’s hard. We thought this (COVID-19 pandemic) would be over with by now,” Rintala said. “It wouldn’t be fun for either team to win or lose knowing that some of the key players are out.”

Rintala had a strong feeling Saturday that he might not be able to put a full team on the ice Wednesday, but he held out hope for as long as he could.

“There’s was a little bit here and there, but it became too much,” Rintala said.

The proper name for the game is the Jeffrey J. McCullough Memorial Challenge Cup, which is traditionally the second of the two Big North Conference games between the Trojans and Titans. McCullough was a three-year varsity player for Central who died of cancer in October 1996, just weeks into his senior year of high school. Central retired McCullough’s No. 14 jersey and put it on display in the lobby of Howe Arena.

Central holds a 19-5 advantage in the McCullough Cup, including the last three and nine of the last 10 years.

The Trojans and Titans have met twice already this year, battling to a scoreless tie on Dec. 15 followed by a Central 7-3 win in the consolation game of the Scott Miller Memorial Tournament two weeks later.

Givens said his players were disappointed but understood the decision.

“They were geared up, but you just have to go with the flow and not get too high or too low — whether it’s the outcome of a game or COVID,” Givens said. “You have to be able to adapt and accept change when it happens.”

Once the call was made to postpone the game, Rintala and Givens as well as West Athletic Director Jason Carmien and Central Athletic Director Justin Thorington went to work trying to find an acceptable day for both programs. With just five weeks left in the regular season, that was not an easy task.

Both Central and West have several weeks in which they are already scheduled to play three games. Givens said they even considered playing on a Sunday afternoon but ultimately found a mutual date that works. However, Feb. 17 is in the last week of the regular season, which gives them no wiggle room.

“If COVID were to pop up again, we’re not going to have any time to make that up,” Givens said. “That game has to go.”

The Trojans (7-3-1) haven’t seen live-game action on the ice since Jan. 5 when they beat Cadillac 4-1. Central plays Midland Dow at 8:15 p.m. Friday in the Deneweth Cup, also known as the North/South Showcase, at Centre ICE Arena and Livonia Stevenson at 2:30 p.m. Saturday.

The Titans (8-4-1) started off the season hot, winning their first five games, but they’ve dropped three of their last four. Rintala hopes to have enough players to get on the ice Thursday when West is slated to play Mattawan at 8 p.m. at Centre ICE, also in the Deneweth Cup. The Titans are scheduled to play Utica in the showcase at 2:15 p.m. Saturday.

“Any day, something could happen and we could be scrambling — but so far so good,” he said. “Lots of teams across the state have run into this before us. You always know it’s potentially there to happen, but we’ve been pretty safe so far.”

After listing nearly 50 canceled or postponed events Tuesday, the Michigan High School Athletic Association website showed 23 more Wednesday. Fourteen have already been canceled for Thursday and 36 more on Friday, according to the MHSAA site.

That has left coaches and athletic directors in an everyday state of limbo. Carmien said canceling Wednesday’s contest was a tough choice but the correct one.

“West and Central hockey is a big night for our community,” Carmien said. “But these things just kind of come with the territory. It’s been two years inside the pandemic, and we’re juggling right now.”

“It is very frustrating. We’re back into day-to-day mode for a bit, and that’s not where anyone wants to be,” Carmien said. “We’re playing when we can, but we’re just not playing every night like we want to.”

Carmien said one positive has been how players, coaches and families have responded to the scheduling changes.

“They are very flexible and persevering because they want to play as much as they can,” he said. “But I think I speak for everyone involved when I say the pandemic is a huge bummer. We’re just continuing to ride different waves of frustration. We all know there’s nothing you can do about it.”