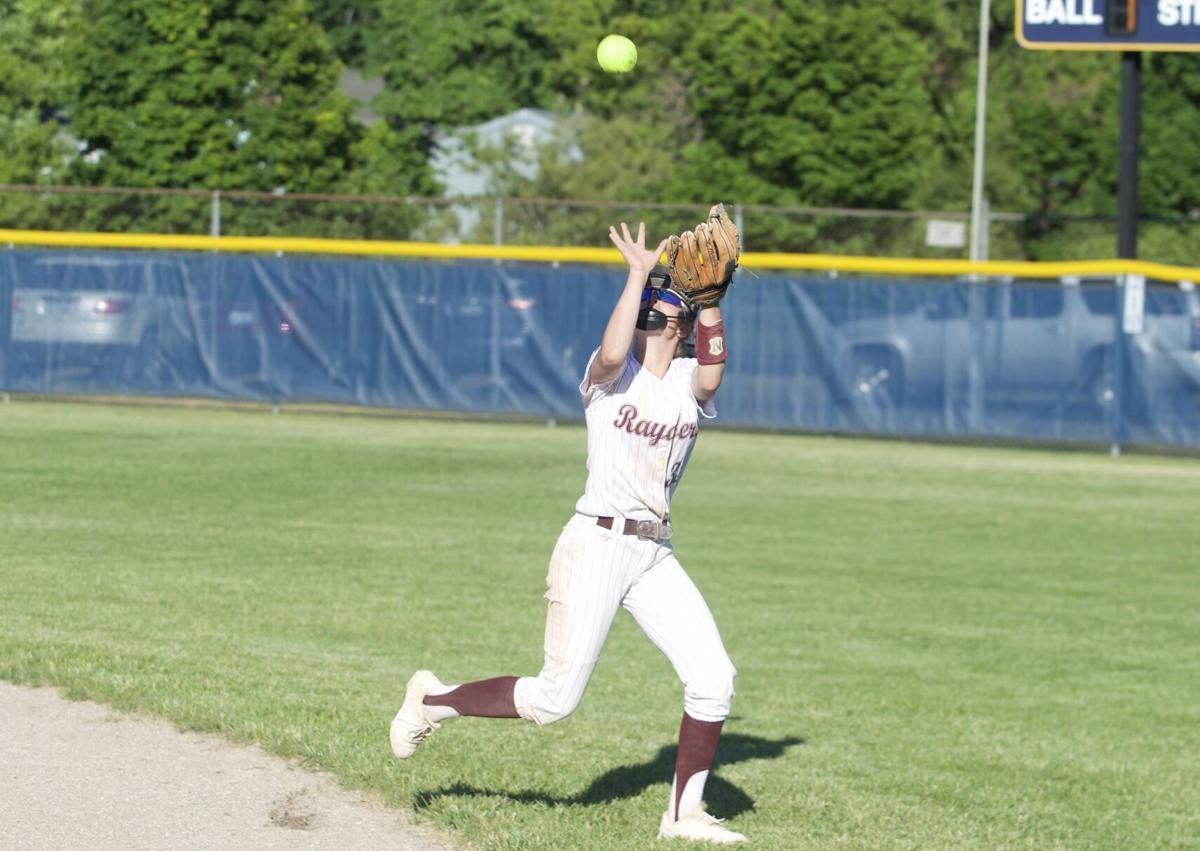 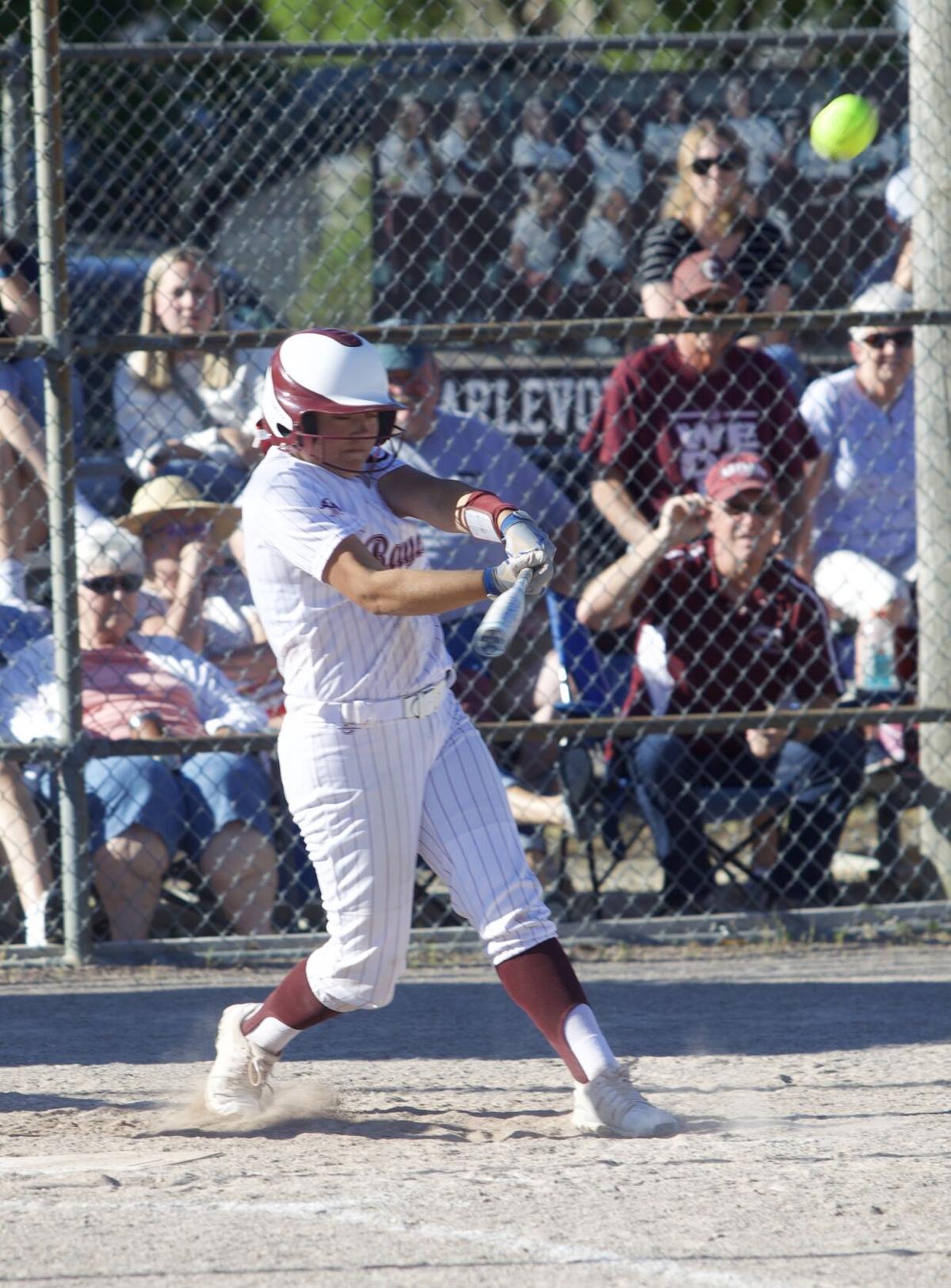 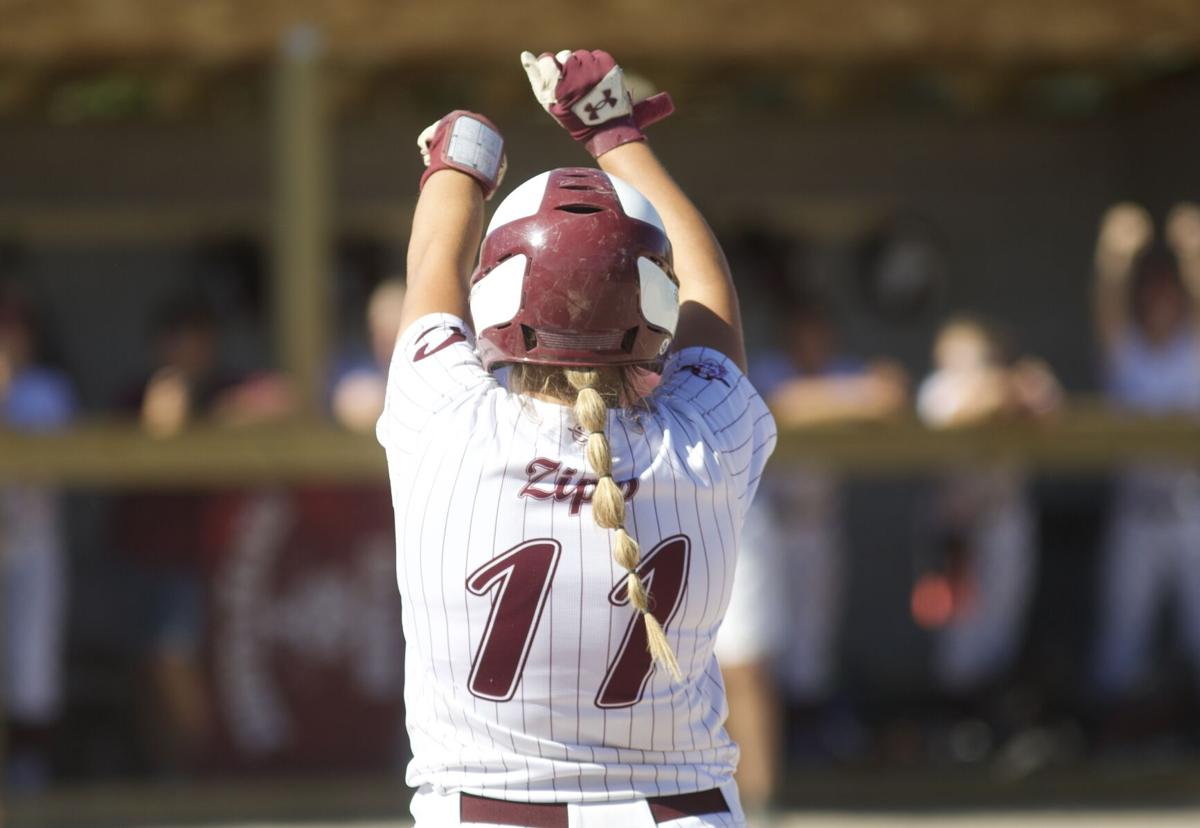 Charlevoix’s Avery Zipp hand signals toward her teammates after hitting a single during the Division 3 quarterfinal in Cadillac Tuesday. 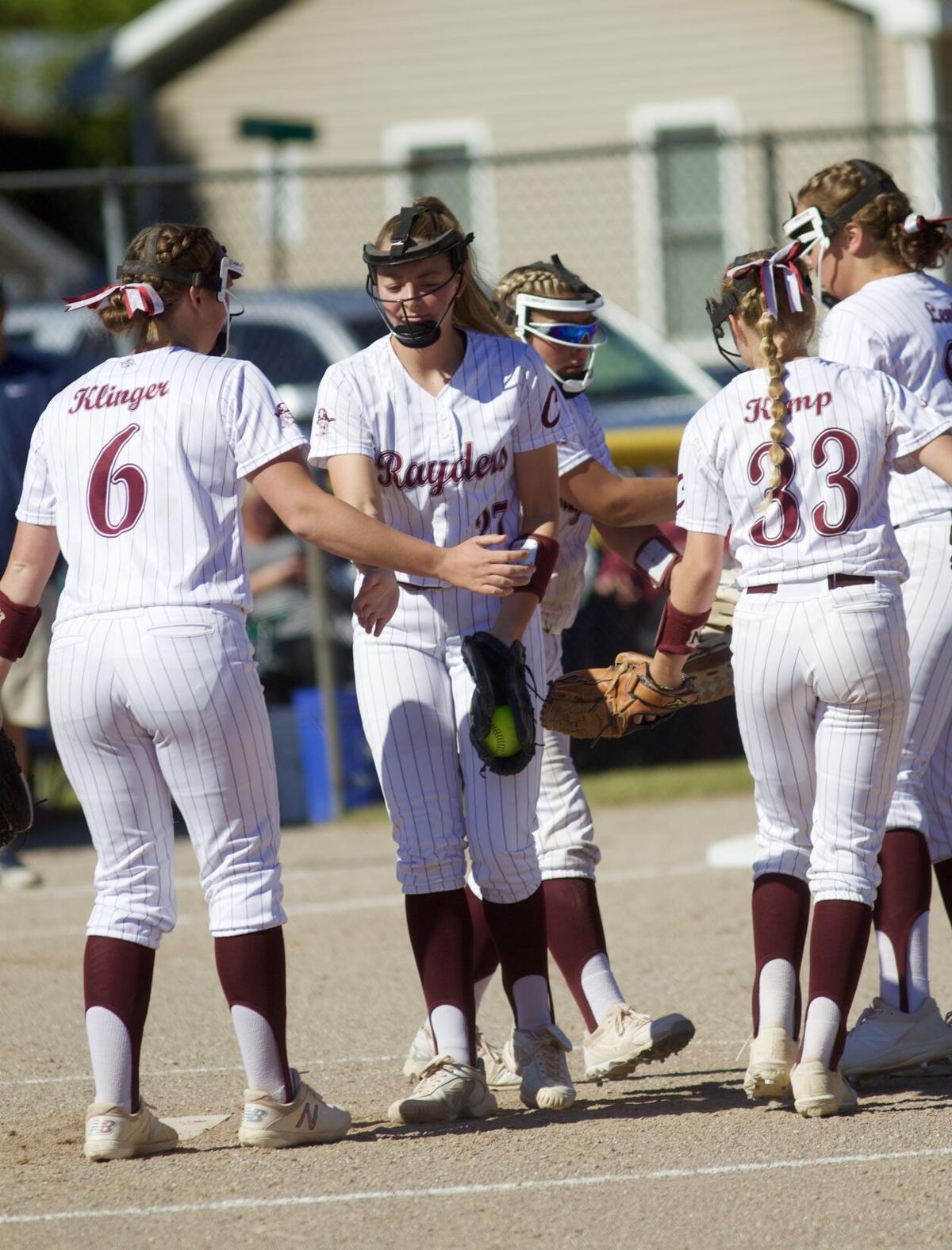 Charlevoix’s Madelyn Sandison slaps hands with teammates after recording a strikeout during the Division 3 quarterfinal in Cadillac Tuesday. 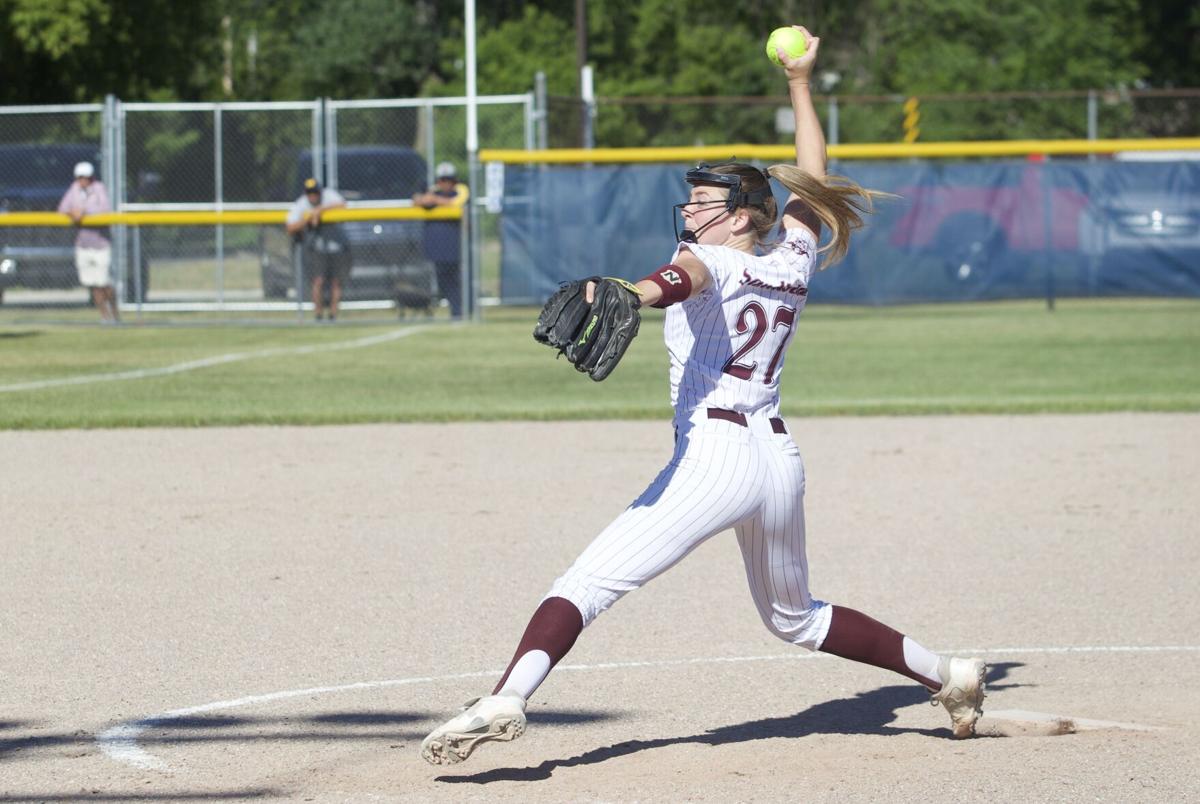 Charlevoix’s Avery Zipp hand signals toward her teammates after hitting a single during the Division 3 quarterfinal in Cadillac Tuesday.

Charlevoix’s Madelyn Sandison slaps hands with teammates after recording a strikeout during the Division 3 quarterfinal in Cadillac Tuesday.

CADILLAC — Postseason magic has been well at work for Charlevoix in the 2021 softball playoffs and it nearly worked again Tuesday in the Division 3 state quarterfinals.

The Rayders fell 15-13 in a slugfest Tuesday with Standish-Sterling at Lincoln Elementary School Fields in Cadillac.

Charlevoix came back from down 9-0 in the third inning against the Panthers to bring the score to 11-10 in the top of the seventh. The Panthers plated another four runs in the final inning before the Rayders had a chance the win the game after scoring two runs with two outs.

“We just knew that once we get in that deficit, there has to be some coming back and fighting for it and that’s been the theme of all season,” Charlevoix senior Kate Klinger said. ”We’ve had so many different curveballs with COVID and lost a couple players here and there and it’s just we got to come back and fight harder and want more.”

Standish-Sterling hopped on Madelyn Sandison’s pitching in the first inning and took advantage of lead-off walks. Devri Jennings hit a grand slam to lead the Panthers to a 5-0 advantage after the first and Macey Feagan hit a solo homer in the third to push the lead to 9-0.

Klinger, who bats sixth in the lineup, did her best to help remind her team why they reached the quarterfinals with a home run of her own to lead off the fourth inning.

“I think it gave us that perspective that we’re still in this,” Klinger said of her home run. “They had a couple of them (home runs) and they were good hits and it just showed that we can do this and we have some strong hitters, too.”

Klinger’s home run sparked a five-run inning that made it 10-6. Standish-Sterling would add one more run in the sixth before the Rayders opened up the bats again for a four-run sixth inning that brought the score within one.

“Every batter in that lineup is a threat the whole game,” Panthers’ head coach Rich Sullivan said. “That’s why I kept telling my girls keep playing your game because this isn’t over.”

Klinger said when the Rayders are down, they decide to fight. Aggressive base running from freshman Anna Kemp, who successfully eluded two pickles and scored a run by stealing home, showed why they were able to win the school’s first regional title.

“I can’t even speak enough about how big their hearts and fight are,” Rayders’ head coach Tom Zipp said. “I’ve told them, they’re going to be great women and moms or coaches or whatever they’re going to do because of that fight.”

Charlevoix totaled 19 hits and only struck out three times total.

“We didn’t have the pressure on ourselves because we weren’t expected to win ever,” Tom Zipp said. “So we’ve always mentally put the pressure on the other team, but today on the bus ride it was a little different. You could tell, and even in me, I was trying to brush it off but we started to expect too much and I think that shook us a little.”