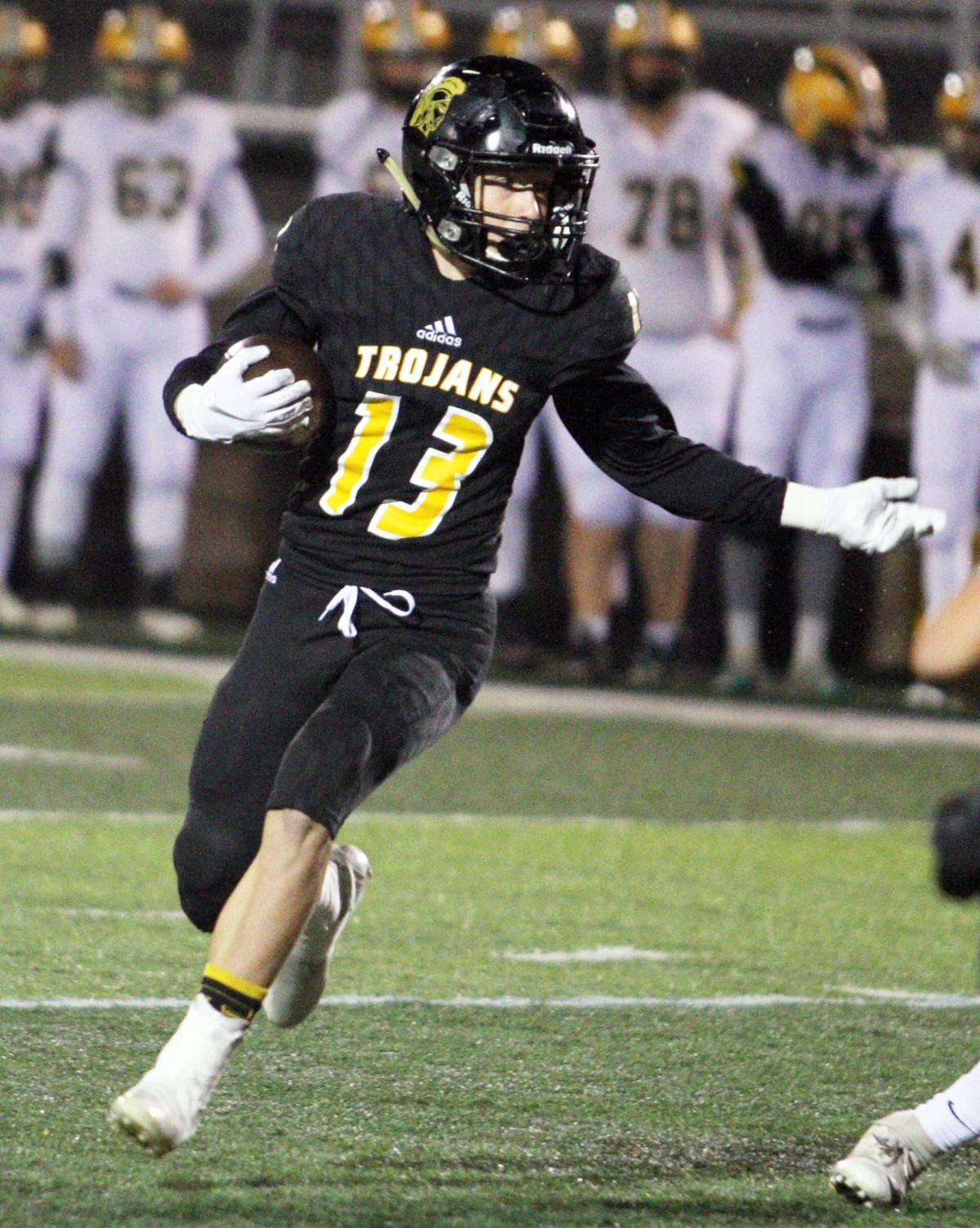 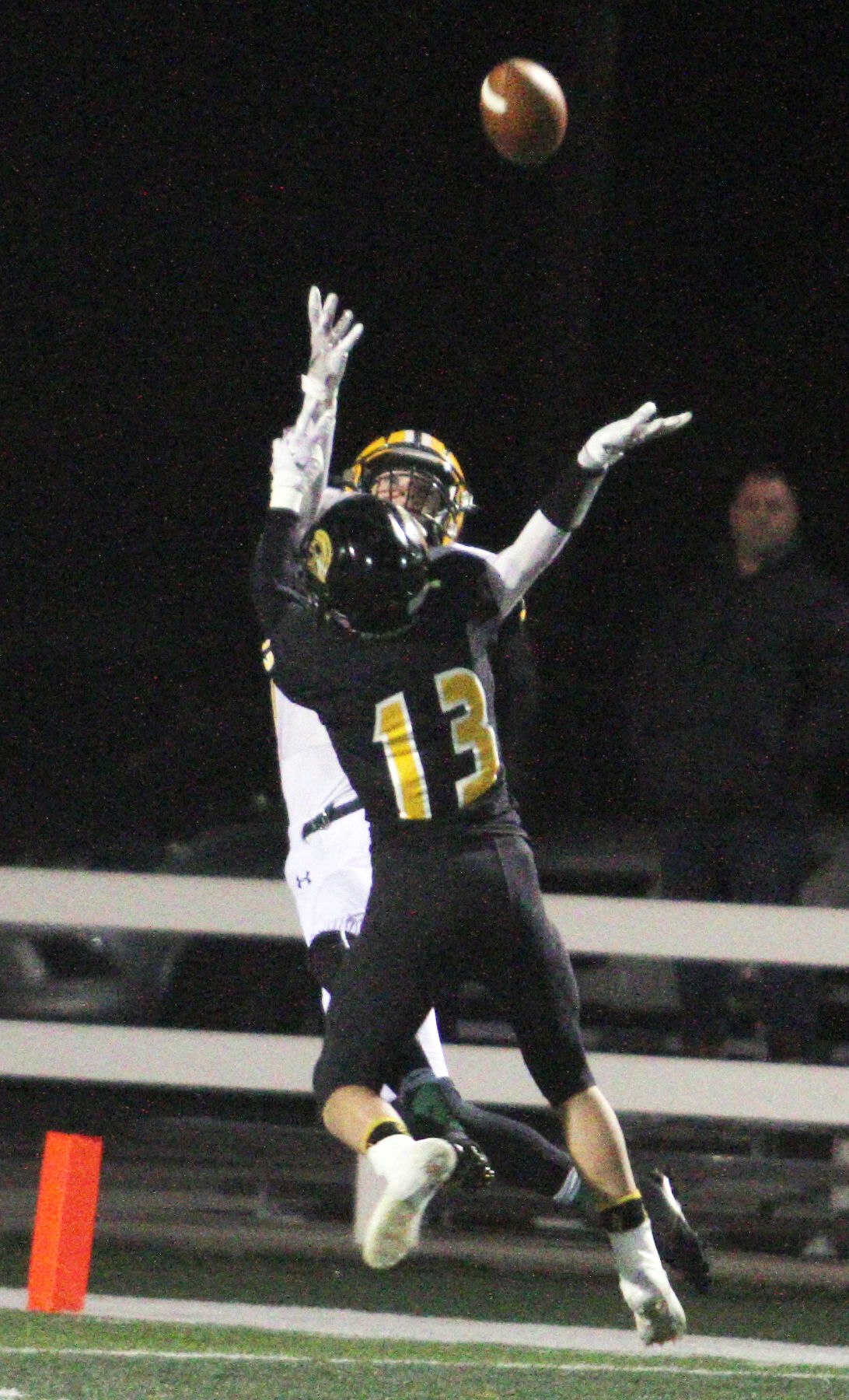 TRAVERSE CITY — The Traverse City Central football team struggled to get anything going for three and a half quarters Friday night against a tough Midland Dow defense.

But the Trojans didn’t quit. They just ran out of time.

Down 27-0 with just over five minutes to play, the Trojans scored three touchdowns and converted three two-point conversions and an onside kick before bowing out in the Division 2 pre-district playoff game before 5,104 fans at Thirlby Field.

“We just ran out of time tonight,” said Central coach Eric Schugars after Dow snapped the Trojans eight-game winning streak 27-24. “We dug ourselves too big of a hole.

“And that’s a credit to Dow. They did some things defensively and they really got after us.”

The Trojans got two late scores from Josh Burnham, an 8-yard run and a 34-yard pass reception. Quarterback Peyton Smith also ran in from 10 yards out to keep the fans from exiting early.

The Trojans (8-2), who recovered the previous onside kick after the second score, were unable to get the final one with 28.3 seconds left.

“Our kids proved again that we’re never out of the game,” Schugars said. “To be down 27 points and bring it back to a score showed that. I’m just disappointed that we could not get it done.”

Dow (7-3), winners of five straight games, took the lead late in the first quarter when Shane Juday scored on a quarterback draw. Hayden Hetherington kicked the PAT to make it 7-0 with 3:39 left in the quarter.

Central missed a chance to even the score when Smith was intercepted by Garrett Daniels in the end zone on a 4th-and-7 on the Dow 35-yard line. Dow missed a 24-yard field goal attempt midway in the second quarter, however, the Chargers stunned the home crowd with Hail Mary-like pass from Juday to Daniels from 35 yards out just 12 ticks from intermission.

“It took our offense a little while to get untracked and both defenses had the upper hand early,” Dow coach Jason Watkins said. “But that was big when our offense punched in that touchdown to make it a two-possession lead.”

Schugars admitted the late score was a heart-breaker but he still felt the Trojans chances were good as they were getting the ball first to start the second half.

“Dow got us on our heels early, but we settled in after Dow scored that first touchdown,” Schugars said. “And we were fine defensively, but then they had that jump ball before half and scored and that was huge”

The Trojans took the second-half kickoff and moved into Dow territory with an up-tempo offense, however, Smith had the ball knocked out of his hands scrambling on a 3rd-and-11 play. Dow recovered and quickly made it a 21-0 game when Juday scored again from a yard out.

The Chargers intercepted Smith’s pass on the next play from scrimmage and then forced the Trojans to punt on their next possession.

Juday appeared to put the game away with a 29-yard TD on sweep around the left end with 5:19 to play.

“I think our defense played fast and physical early and that kind of stymied Central,” Watkins said. “And that makes that offense on the other side turn the page a little bit and lets you be able to pin your ears back and come a little bit more.

“Central had some turnovers and penalties and we made the big plays and when you convert them, that makes a huge difference.”

The Trojans responded to the 27-0 deficit, getting their first score from Burnham with 3:34 left and forcing a punt.

Smith scored with 35 seconds remaining and then the Trojans recovered the onside kick. An unsportsmanlike conduct penalty against the Chargers put the ball on the Dow 34 and Smith hooked up with Burnham again for the TD. Hall caught the final conversion pass.

“That’s a good Midland Dow team and they are peaking at the right time,” Schugars said. “Unfortunately for us and this team, this is hard to go out.

“We had fun with this group every day. It’s going to be sad on Monday not getting to practice with them.”

Juday and Avian Rivera each had 64 yards rushing to lead the Dow ground game. Juday was also 16-for-22 passing for 238 yards. Dow finished with 154 net yards rushing and 238 passing.

Smith was 9-for-26 passing for 158 yards. Austin Bills led the Central rushing attack, carrying the ball 12 times for 126 yards. Central had 158 net yards rushing and 158 passing.