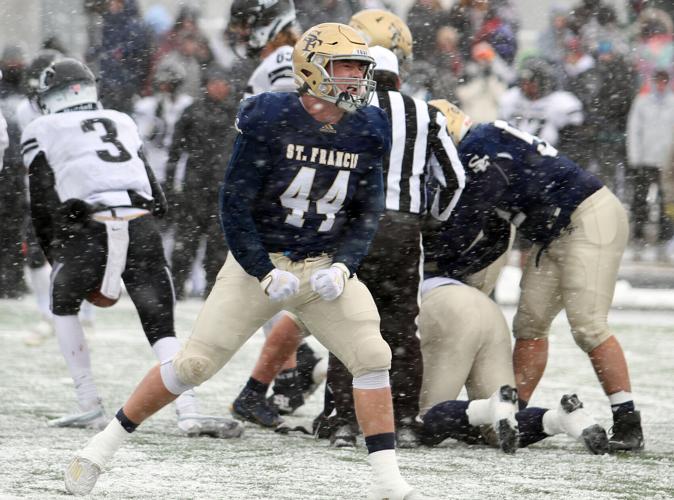 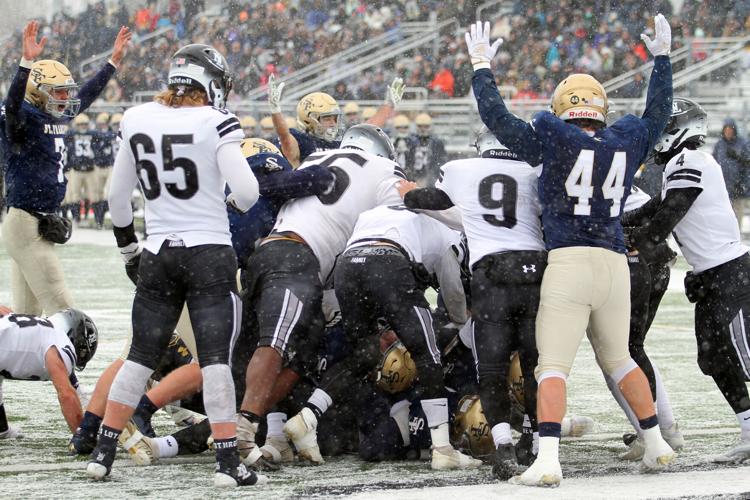 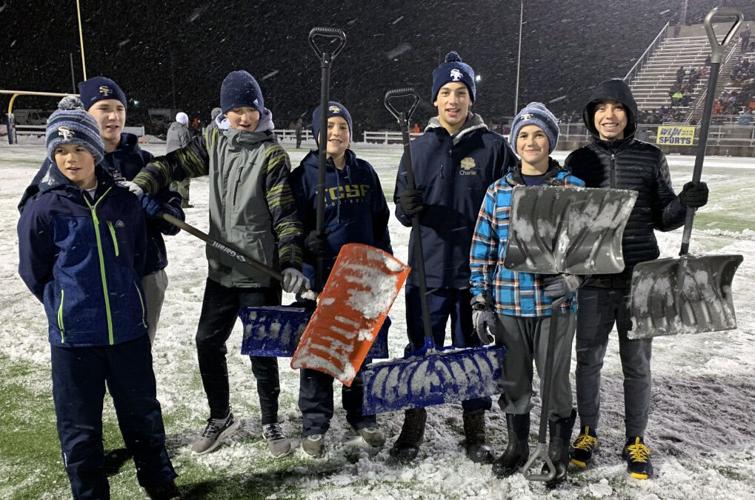 Traverse City St. Francis running back Jack Prichard (5) tosses the ball to a referee after scoring a touchdown against New Lothrop in Saturday's Division 7 state semifinal in Clare. 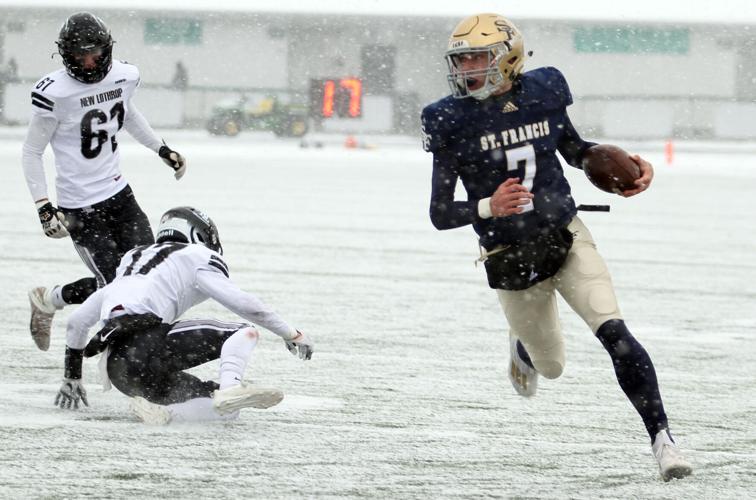 Traverse City St. Francis running back Jack Prichard (5) tosses the ball to a referee after scoring a touchdown against New Lothrop in Saturday's Division 7 state semifinal in Clare.

CLARE — It was almost like four years ago, but much better being on the other side.

A bunch of Traverse City St. Francis’ seniors fondly recalled taking on emergency roles as shovelers during the Gladiators’ 2018 regional championship game against Kingsley, played in a snowstorm.

Fast forward four years (and about a week) later, and those same players had their own gaggle of schoolkids shoveling snow off the yard lines for them as St. Francis continued its dominating path to the state championship game. The Gladiators plowed through snow for a thorough 53-8 victory over No. 10 New Lothrop in Saturday’s Division 7 football state semifinal at the Brookwood Athletic Complex in Clare.

“We were always there to support and then it starts snowing, they’re like, ‘We need people to shovel on the sidelines,’” Gladiators senior tight end John Hagelstein said. “We were there already there being water boys. So we just grabbed shovels and started going.”

The seven water boys-turned-shovel crew were Drew Hardy, Wyatt Nausadis, Hagelstein, Garrett Hathaway, Joey Donahue, Jack Prichard and Noah Endres. Those seven would go on to help form the core of a St. Francis team that’s been crushing its competition — and now moves on the next Saturday’s 10 a.m. championship contest at Ford Field in Detroit.

“I was talking to coach (Steve) Curtis and I was watching the guys (shoveling) and I was like, ‘This reminds me of us in eighth grade doing the snow crew against Kingsley,’” Hardy said. “I was going right in front of the student section and I just absolutely ate it. The shovel stuck in my stomach, and I flipped right over it. They were all laughing. I had to laugh, of course, because I didn’t want to be like that.”

With some Clare students handling the shovels this time to keep the yard lines and boundaries clear, the Gladiators largely made that irrelevant by breaking off big plays in the first half that wouldn’t need a measurement on the way to a 46-8 halftime lead.

The Hornets certainly weren’t flying. But in the insect world, hornets die off as winter approaches and only the queen survives to start anew the next year.

The No. 1-ranked Gladiators (13-0) play No. 7 Jackson Lumen Christi (10-3) for the state title, a team they played 11 weeks ago and snuck by 42-35. The Titans started the season 0-3 for the first time in program history, then reeled off 10 consecutive victories to get another shot at St. Francis, including Saturday’s 20-7 win over Napoleon.

“It’s hard to be team twice,” Prichard said. “But we’re going to prepare, have a good week of practice and hopefully go get a state championship.”

The first time the Glads and Titans played was in Jackson. Now it’ll be on the artificial turf of Ford Field, a big departure from Saturday’s semifinal played with temperatures in the 20s, a wind chill near 10 degrees and near constant snowfall.

“It’s going to be interesting,” Hardy said. “It was a close game last time we played them, and I think we can do it again.”

St. Francis didn’t waste any time Saturday, pointing itself squarely toward Detroit with another dominating performance.

Nausadis returned the opening kickoff for a touchdown, and the Glads turned all seven first-half possessions into touchdowns. Nausadis almost had his second return TD of the day, but his long punt return score was negated by a blindside blocking call. St. Francis made it not matter, going 84 yards in four plays with Hathaway scoring on a 27-yard run.

“Both teams had to deal with the conditions,” New Lothrop head coach Clint Galvas said. “They just really jumped out early and kind of rode that momentum. Football is a game of momentum, and they got it right off the start. We just weren’t able to get it back.”

Hathaway would turn a Prichard interception into a one-play, 34-yard drive with a long TD run. Nausadis hit Hagelstein for the conversion for a 20-0 lead.

“We knew we had to come out fast,” Hagelstein said. “Coming out, we were all pumped up, but we also knew what was at stake. Knowing that it could be your last game, you just play with an extra effort. To punch them in the mouth at the start was definitely the biggest thing.”

The Gladiators didn’t turn the ball over and came up with three interceptions and two fumble recoveries.

New Lothrop scored its only touchdown on the first play of the second quarter, with quarterback Jack Kulhanek hitting Alec Wenzlick for a 20-yard TD and then running in the conversion for a 20-8 deficit.

“That might be the best football team I’ve ever coached against, as far as from top to bottom,” Galvas said. “They’re pretty darn good. We knew we had to play a perfect game and limit our turnovers and penalties and the scoreboard is what it is.”

A Nausadis interception of a halfback option pass set up Donahue’s 2-yard TD run up the middle. New Lothrop blocked two St. Francis extra points, including one by Nick Barnette after the Donahue TD. Nausadis tacked on a 42-yard TD run up the right sideline for a 40-8 lead. Burke Flowers recovered a Hornets fumble to set up a Nausadis pass to a wide open Hagelstein for a 26-yard score and 46-8 lead before halftime and start the second half with a running clock.

St. Francis’ band played “Hot, hot, hot” at halftime, backing up the Glads’ play on the field or playing off of the weather conditions, which even the public address announcer deemed “terrible.”

Flowers added a 2-yard TD run and Ty Martinchek kicked the extra point for the game’s last score on the Glads’ first second-half possession. Prichard would pick off another pass and Luke Million recovered a fumble to keep New Lothrop off the board in the second half.

“It’s crazy weather,” Prichard said. “We’re all just trying to do our role. Our offensive line did a great job, then the defense put pressure on the quarterback and he didn’t have much time to throw and then at DB, we did our job.”

“Now it’s time to make our move and finish out the season,” Hagelstein said. “We have a goal and we’re going to do everything we can to get to it.”

The Get Around Episode 234 — Traverse City St. Francis' Joey Donahue and Ryan Henning-Neumann

The Get Around Episode 232 — Playoff Madness is Upon Us!

"That might be the best football team I've ever coached against, as far as from top to bottom."

TRAVERSE CITY — Traverse City St. Francis made a beeline to the state championship game, powered by its O-line.

DETROIT — Traverse City St. Francis’ own dominance may have been its downfall.