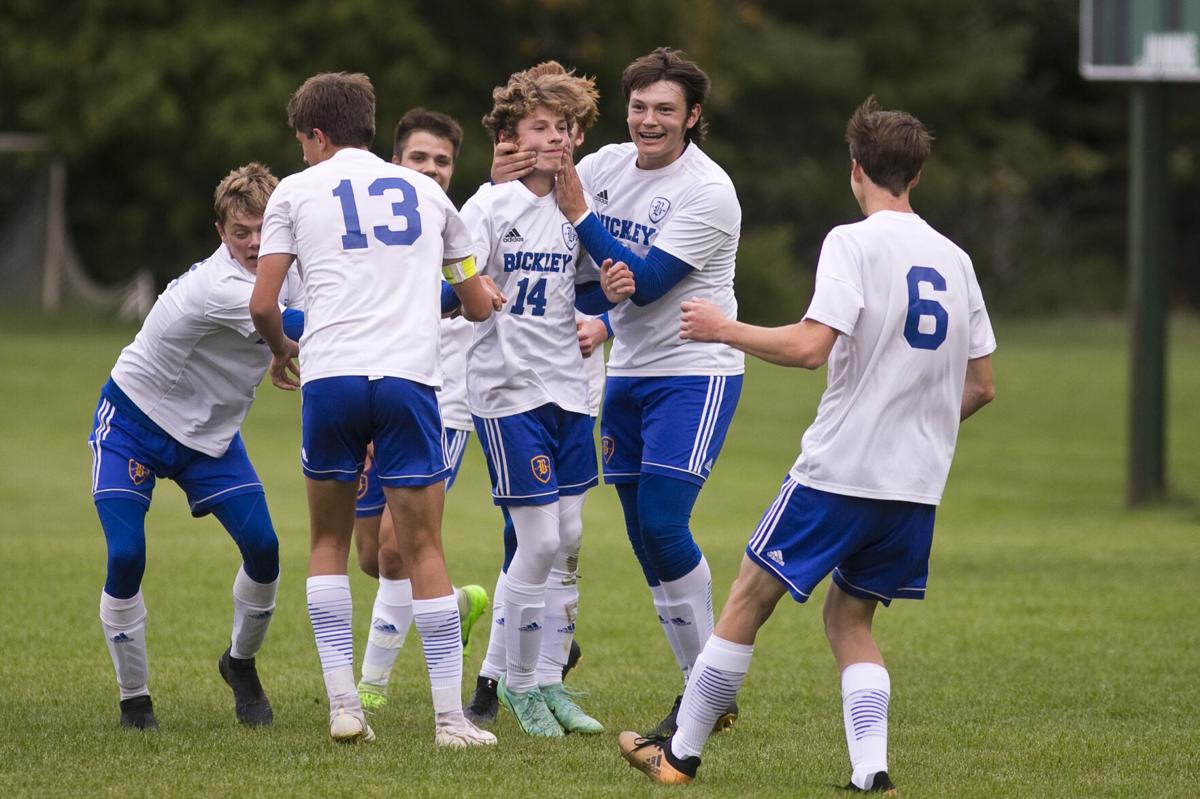 Buckley players celebrate Jake Romzek’s goal in the first half of a game at Leland on Sept. 22. 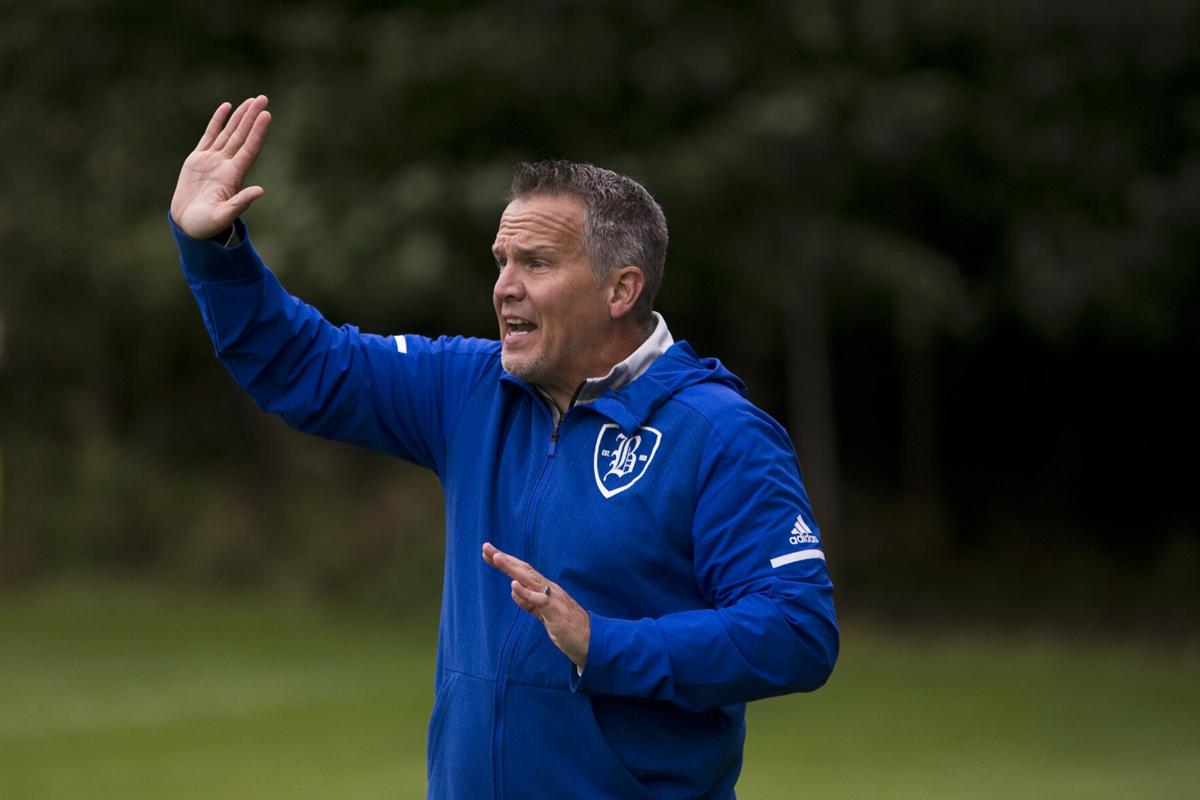 Buckley coach John Vermilya talks to his players during their game at Leland. 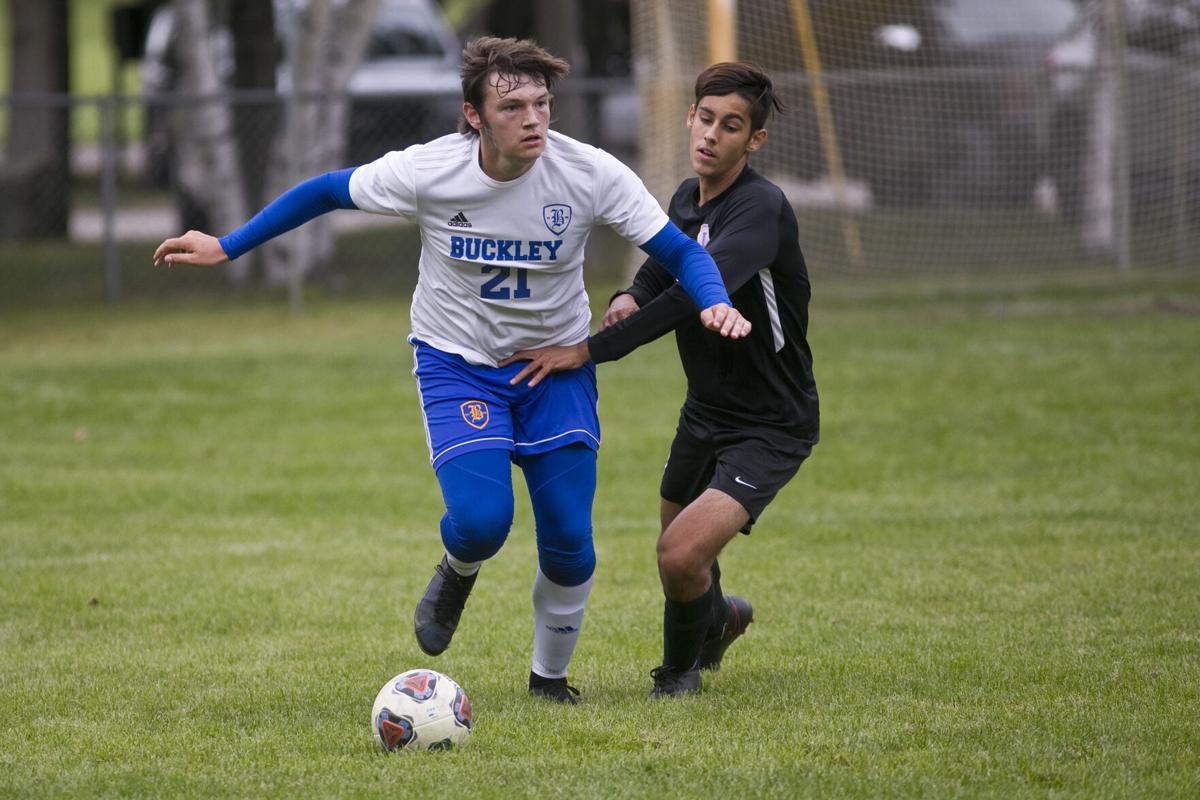 Buckley’s Luke Frasier (21) runs past Leland’s Augustin Creamer (10) in the first half of a game against Leland Sept. 22.

Buckley players celebrate Jake Romzek’s goal in the first half of a game at Leland on Sept. 22.

Buckley coach John Vermilya talks to his players during their game at Leland.

Buckley’s Luke Frasier (21) runs past Leland’s Augustin Creamer (10) in the first half of a game against Leland Sept. 22.

KINGSLEY — Some business was left undone from the 2017 Buckley boys soccer squad.

With a 6-0 win against Kingsley on Wednesday, Buckley (14-4-1) moved to 9-0 in the Northwest Conference and clinched the conference title outright, accomplishing a feat the Bears hadn’t since 1999.

“It’s something that has always eluded us for one reason or another,” Buckley head coach John Vermilya said. “To win your conference championship means you’ve stacked up against all of the other schools in your league and come out on top.

Ross Fairchild netted two goals for the Bears and added an assist in the win. He shared “man of the match” honors with senior Luke Frasier, who had a goal and two helpers. Jakob Barley, Tyler Breithaupt and Tyler Milarch also scored for the Bears. Milarch and Garrett Ensor each had an assist as well. Goalkeeper Tyler Apple made seven saves, securing Buckley’s fourth consecutive shutout.

Frasier, the team’s second leading scorer, said being part of the team to bring a conference title back to Buckley in more than two decades is “super special.”

“It’s nice to get another trophy up in the case at school,” Frasier said. “I knew we would be a great team, but I wasn’t sure how it was going to play out. I wasn’t expecting a conference title or to win as many games as we have so far, but I hope we keep going.”

Rath has been part of the Buckley soccer program since the sixth grade. He never thought he would make it this far.

“I never thought I’d be able to lead my team to something this big for our community,” Rath said. “This has been a very big uprising — for the team, for everyone. Not very many people saw what we saw in each other. Our coaches did, but not many others.”

Rath said revitalizing the program after a couple of down years following the team’s 2017 success and run to the state semifinals has been a blast.

“Some of my best friends were on that (2017) team. It’s almost been a burden to bring that back — that joy and enthusiasm,” he said. “Doing it has been one of the best feelings I’ve ever had.”

Now, Rath sees the younger players taking on the same fire and grit this team has.

“Our success and the success from four years ago has been transferring down the line,” he said. “I have siblings in junior high, and they want it just as bad as we do.”

Vermilya said the program’s growth to a team that now has 25 players has a lot to do with the momentum from successful teams.

The head coach, who is in his 12th year at the helm of Buckley, said he never expected to have the outright title heading into Saturday when the Bears face rival Leland.

A win over the Comets and an undefeated conference season would be the proverbial cherry on top, but Vermilya is looking ahead to postseason play and making sure some of his injured players get some much-needed rest.

The Northwest crown gives Buckley confidence going to the playoffs, Vermilya said. The Bears have beaten all of their potential district opponents at least once this season — some twice — and have the No. 1 seed. But Vermilya admitted it is difficult to knock off a team three times in the same year.

“From now on, it’s one game at a time — and then we go again,” Vermilya said.