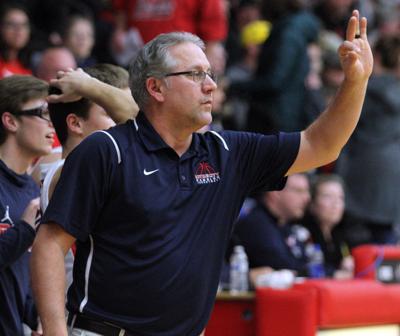 Eventually, one had to give way to the other.

Redman retired Monday as boys basketball coach at Boyne City after reviving the Ramblers program in his 11 years at the helm.

Redman has been juggling many things in recent years, including his wife’s battle with breast cancer and his father’s current fight against melanoma. In fact, while news of his retirement broke Monday, he was in Traverse City taking his dad in for testing.

“It was tough balancing work, basketball and family,” Redman said. “I thought it was time to step down. Our program is really healthy now and I felt good with where it’s at. It was the best thing in my life aside from my family.”

The Rambler program had gone a decade without a district championship, reaching 10 wins or beating rival Charlevoix.

Since 1986 Boyne City grad took over the team for the 2009-10 season, Redman has guided the Ramblers to 161 victories, two Lake Michigan Conference title, seven district championships, two regional crowns and a Final Four berth in 2014-15. Boyne was set to play for a district title for the 10th time in 11 years when play was suspended because of the COVID-19 pandemic.

“Coach Redman is the epitome of Boyne Pride as he has long served as a role model for young men in our community,” Ramblers athletic director Adam Stefanski said. “Nick’s leadership will be deeply missed and Boyne City High School has been extremely fortunate to have such a dedicated Rambler alum leading the way for so many years.”

Redman was honored as 2015 Region 14 Coach of the Year by the Basketball Coaches Association of Michigan, as well as the 2018 honorable mention all-state coach by the Associated Press.

In his 11-year tenure as head varsity coach — he spent 19 total within the program — Boyne players earned all-state recognition nine times from at least one media source and eight student-athletes went on to play basketball collegiately, including his sons Jay (Lawrence Tech) and Corey (Central Michigan) and current Rambler Pete Calcaterra (Michigan Tech).

“It takes a whole team of people to build a program,” Redman said. “We really started turning our culture around. You get out what you put in — and everybody bought in.”