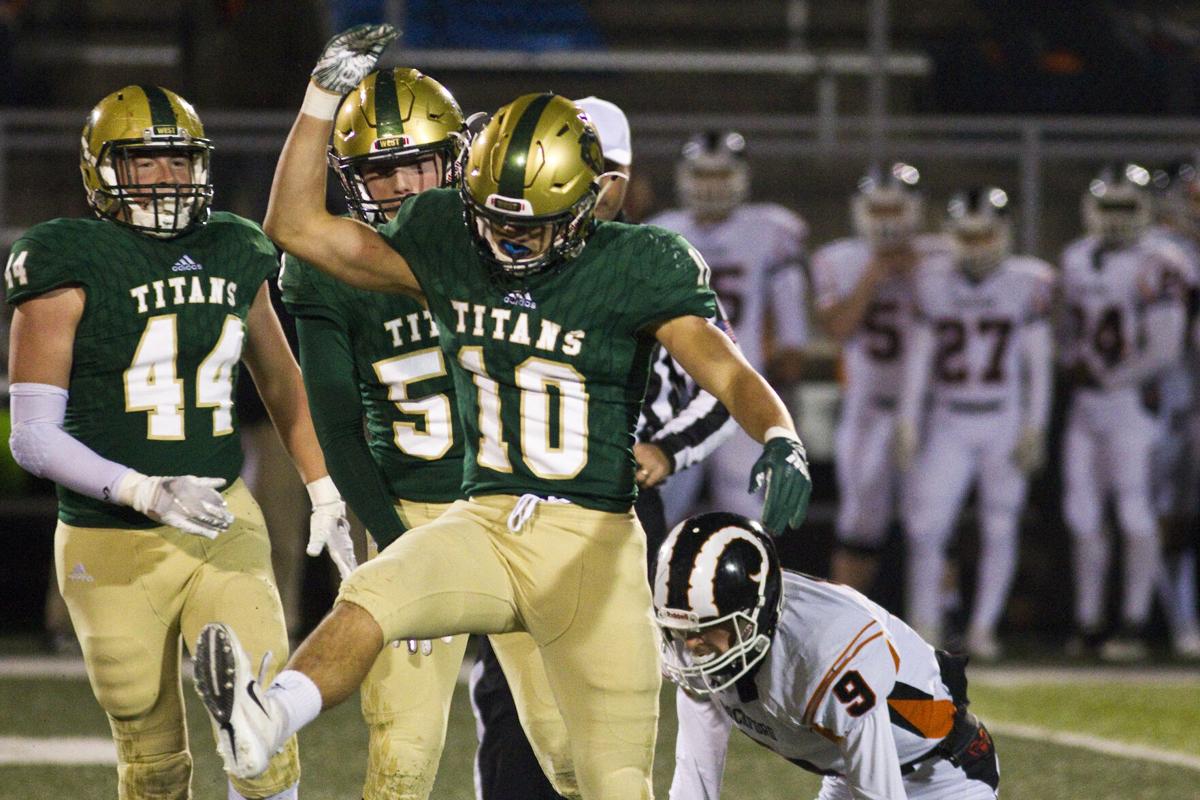 Traverse City West’s Christian Boivin (10) celebrates a sack of Rockford quarterback Drew Bareno (9) in the second half of a game at Thirlby Field in 2019. 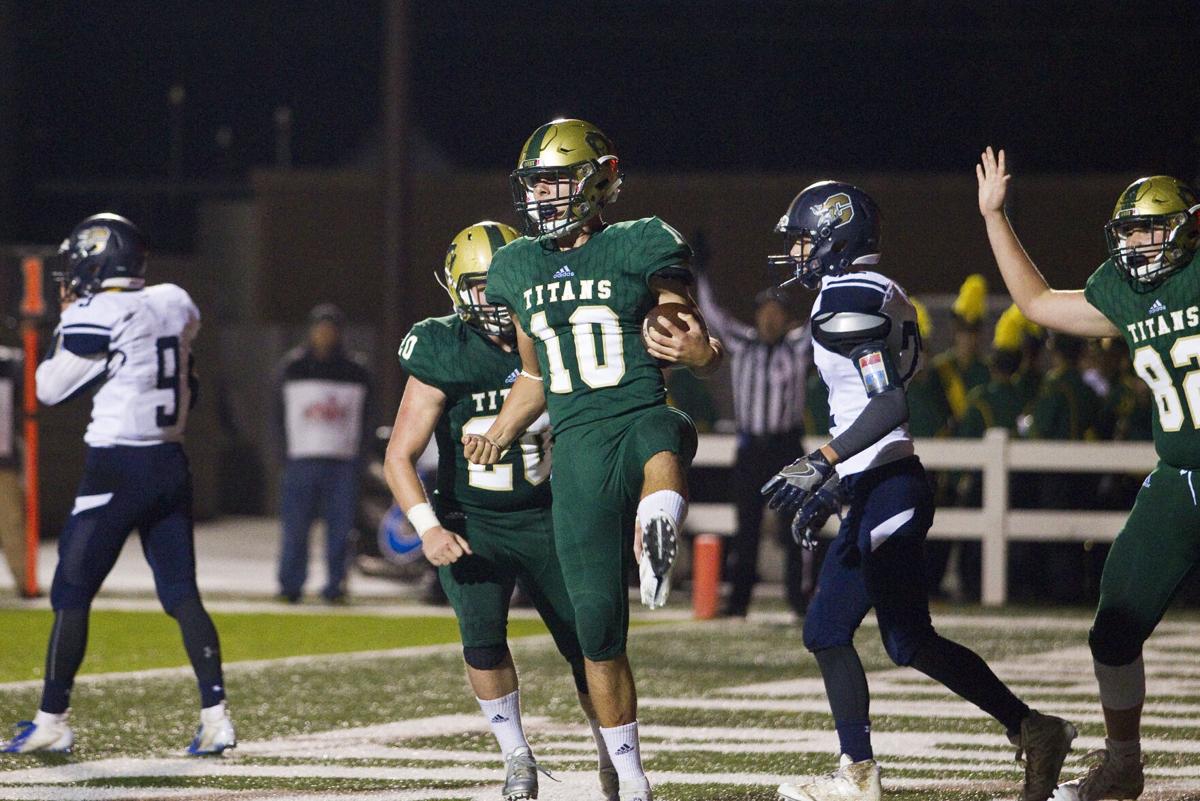 Traverse City West’s Christian Boivin (10) celebrates his touchdown in a game against Cadillac at Thirlby Field in 2019.

Traverse City West’s Christian Boivin (10) celebrates a sack of Rockford quarterback Drew Bareno (9) in the second half of a game at Thirlby Field in 2019.

Traverse City West’s Christian Boivin (10) celebrates his touchdown in a game against Cadillac at Thirlby Field in 2019.

But the Traverse City West all-state linebacker felt his hand was forced when the Michigan High School Athletic Association moved football to the spring in an Aug. 14 decision.

Boivin prepared for the eventuality, but hoped that he’d be able to stay at TC West.

“The process was difficult, but once it came down to it and coach called and told me the season was canceled, it was easy,” Boivin said. “I have to play with the cards I’m dealt.”

The 5-foot-11, 205-pound linebacker and all-around weapon moved to Iowa to live with his aunt and uncle and is playing football at Johnston High School in suburban Des Moines.

Boivin departed Sunday for Iowa, two days after the MHSAA announced the football season would move to spring. He started practicing Monday at Johnston.

“It’s a great opportunity for Christian to take his talents to a school and get some looks,” TC West head coach Greg Vaughan said. “His hope was to play for Traverse City West. He fortunately has the ability to go out there with family.”

Boivin has a handful of Division 2 and Division 3 offers, but is looking for something larger at this point.

He’s had conversations with many bigger schools such as Michigan State, Notre Dame, Yale, Columbia and Kansas State, but with COVID-19 shuttering summer football camps, he hasn’t been able to show off his skills since a breakout junior year in which he set Michigan’s single-season record for blocked kicks with seven in 10 games.

Recruiting plays a role in the move, as he wants to get his game out there in the fall rather than wait for spring, when schools will have already received commitments for most of their scholarships.

“Everyone is looking for that golden ticket,” Boivin said. “An offer from a university where your life is set up academically.”

He has offers from schools like Saginaw Valley State, Nebraska-Kearney, Hope College and Rose-Hulman Institute of Technology.

Johnston 19th-year head coach Brian Woodley said he could tell right away Boivin had studied tape on the team, because he came in knowing much of the Dragons playbook.

“I’m very impressed with the young man,” Woodley said. “Number one, he’s a great young man. I can tell he’s got a very high football IQ. He’s been here for days and picked up things very fast.”

Woodley said a good number of Iowa schools have gained recruits from other states that have altered their football season as a result of the coronavirus pandemic. Woodley said Boivin is the only Dragons incoming transfer.

“Here in the Des Moines area, a lot of the suburban schools are getting people from Illinois and the Kansas City area,” Woodley said.

The Dragons just missed the playoffs last year at 5-4, snapping a 12-year postseason streak. Three of the previous five seasons, Johnston advanced at least to the state quarterfinals in Iowa’s largest division, Class 4A. The school has an enrollment of almost 1,700, similar to West.

Iowa compacted its football season from nine to seven games, forcing schools to eliminate long road trips from their schedule. For this season only, every team will make the playoffs starting in the eighth week.

Johnston, located on the northwest side of Des Moines, starts school Aug. 31, pushed back one week because of a derecho that brought hurricane wind speeds to parts of the state. The Dragons open the season Aug. 28 against rival Urbandale in a game dubbed the “Border War” because the districts share a boundary.

Only 5.3 miles and an interstate highway separate rivals Johnston and Urbandale (TC Central and TC West are 6.6 miles from each other), and the two meet to open the season.

“It’s an interesting vibe,” Boivin said of Iowa. “It’s definitely different. You can drive 15 miles and go through three towns and you never know which one you’re in unless you’ve always lived here.”

Boivin said he aims to return to Traverse City West to finish up his senior season. He also hopes to graduate early if he gets an offer from an Ivy League school or equivalent. He’s already had contact with Yale, Columbia, Northwestern and Kansas State. He said Iowa State, Iowa, Kansas State and Northern Iowa will all have scouts at the Johnston-Urbandale contest.

Boivin started preparing for this eventuality two months ago, getting the necessary paperwork in order to change guardianship and medically demonstrate an allergy sensitivity.

“We saw this an an extremely likely outcome to the Michigan situation,” Boivin said. “We knew we had a very promising season in Iowa.”

He’s living with his aunt and uncle, J.P. and Cara Kramer, whose oldest two of four children attend the same high school.

He said a dream scenario would include returning to TC West for the second semester and being able to play the spring gridiron season with his Titan teammates, although that decision likely lies with the MHSAA.

“They know there are numerous players leaving the state and wanting to come back,” Boivin said. “I’m waiting to see how they handle that.”

Prep roundup: West rallies from down 16 to win Lober Classic

Prep roundup: West rallies from down 16 to win Lober Classic

NORTH SWARM: Volleyball, soccer, swimming back only in Regions 6 and 8

TRAVERSE CITY — Get ready for a lot of home games, northern Michigan.

THOMPSONVILLE — A few new rules and guidelines didn’t deter 65 girls golfers at all.

By the Numbers: Scouting showcase gives Traverse City kids chance to get metrics

TRAVERSE CITY — A lot of bad things have happened during the coronrvirus pandemic.

All in at Alma: Daenzer looks to excel in classroom and on the field for the Scots

TRAVERSE CITY — Wherever Darcy Daenzer went during her senior year at Traverse City West, he…

TRAVERSE CITY — All it took was three hours.

TRAVERSE CITY — Traverse City Central kicked off its 2020 volleyball season with a perfect 3-0 record in a home quad Monday.

TRAVERSE CITY — Streaming high school games picked up in recent years, but the coronavirus pandemic has given it more steam in recent months.

BENZONIA — The 11th annual Pete Moss Invitational certainly could go down as the most unique in the race’s history.

INDIANAPOLIS — Three midwest states are not playing football in the fall.

Cook: Necessity, the mother of invention

There’s a lot of caution out there.

TRAVERSE CITY — Luke Little went viral in a good way in the year of the coronavirus.

TRAVERSE CITY — It all started with a Barbie four-wheeler in 2006.