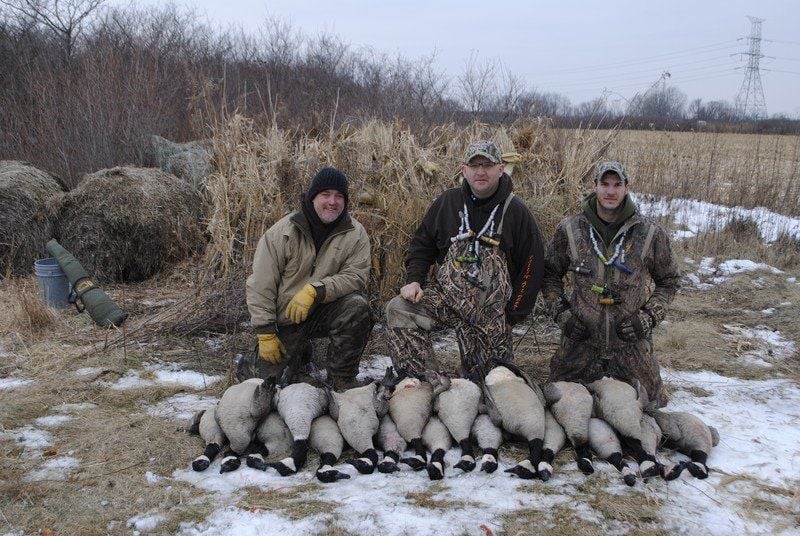 Special to the Record-Eagle/Bob GwizdzMatt Allen, left, Joe Robison and Shea Hegedus pose with geese from a morning hunt. 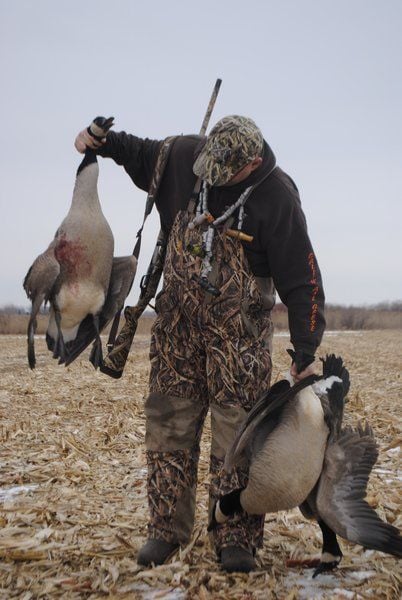 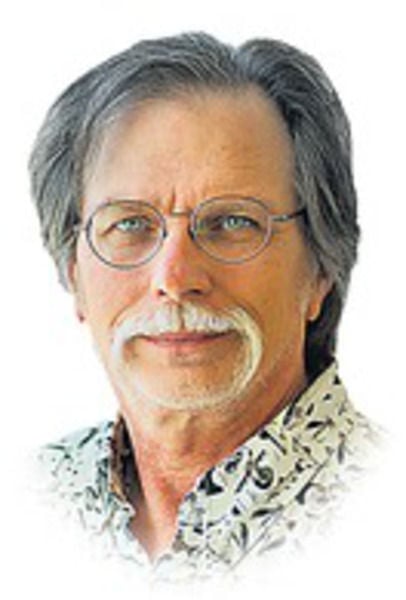 Special to the Record-Eagle/Bob GwizdzMatt Allen, left, Joe Robison and Shea Hegedus pose with geese from a morning hunt.

ERIE – Joe Robison figured this was going to be the day. The weatherman was calling for morning snow and after two days of blue skies, he figured the geese would be out feeding early. And for a while, it looked like he was about half right.

We were out early and set with about 100 decoys shortly after first light. But an hour later, only one pair of geese had taken notice and, when they came in, they changed their minds right at shooting range. We killed one of them.

A little less than an hour later, a quartet came by and the four of us, nestled in an A-frame blind on the edge of a picked corn field, shot three of them.

Other geese were flying in medium to large flocks, but they had other locales in mind. Robison, a Department of Natural Resources wildlife biologist -- and a hardcore waterfowl hunter – admitted to being a bit perplexed. The snow never arrived and, if anything, the temperature climbed.

And then everything changed.

A flight of birds (maybe 20) came barreling in on us from the north and when they drew within range, Robison called for the shot and we killed six of them. As they departed, a foursome swung in, low from the east, and all four us instinctively chose the right bird to shoot at and we killed them all, and then, suddenly, another small bunch were on us from the west and we killed four from that flock: 14 birds in less than five minutes, giving us 18 by 10:15.

It was easy to see why the small groups were sucking in to the spread. It looked ideal. Robison and his semi-regular hunting partner Shea Hegedus had positioned about 30 shells in a sleeping posture on the upwind side of the spread, then strung out about 70 full-bodied Avian X decoys in front of and to the downwind side of the blind. It looked a Canada goose social.

Robison said he noticed that sort of behavior by geese in the past – birds that had already fed and were relaxing, separated a little bit from those that were actively feeding.

Robison said the geese in the area had been split up between two adjoining corn fields in previous days, so we parked our trucks out in the middle of one of them to help persuade the birds to come into the field we were defending. It seemed to work.

“I used to go to Ontario every year when they had a season that ran into later February and we usually shot them up pretty well,” Robison said. “Usually, we get a mid-winter thaw and you see the geese start coming back up from the south. You start getting those south winds by around the first of February and a lot of geese come with them.

“The late season’s never been a huge harvest time for Michigan,” he continued. “Sometimes you get frozen out for the whole season. So we decided to go later and see if we’d get those geese coming back with the warm-ups.”

It didn’t work that way last year. If you remember last winter — the first time the DNR proposed a later late goose season like this — we had full blown ice cover from deer season to March. So next year? Robison said he’d like to run the late season late again, then evaluate it.

That’s not his call, of course. The DNR begins with a handful of ideas, takes them to the Citizens Waterfowl Advisory Council for its recommendations, then those are forwarded to the Natural Resources Commission for the final decision. But Robison is optimistic because the late season has been excellent this year.

“I haven’t heard any complaints yet,” he said. “I’ve been hearing a lot of good reports from areas around the Detroit River and the Huron River in Ann Arbor.”

Michigan’s giant resident Canada geese need two things to keep them around in winter: food and open water. Typically, unless the weather’s brutally cold, there is enough open water in southern Michigan – in rivers or near power-plant discharges – to provide roosting areas. And unless there’s heavy snow cover – say, 10 inches or more – the geese can usually find what they need in the harvested grain or winter wheat fields.

We discussed whether we should stay and try to fill out our limit – we only needed two more birds – or call it good. We went with the latter.

“A lot of times you can burn out a field waiting to fill your limit,” Robison said. “Unless it’s the end of the season, it’s often better to get out of there and think about the next hunt. If you’re in a field and you get a flock of 30 or 40 geese to come in, it doesn’t make a lot of sense if you’re just going to shoot two out of it. Leave it for next time.”

Robison apparently made the right call; three mornings later, he said, he and four buddies shot 25 geese –a five-man limit – in a couple of hours.

“This has been one of my better late goose seasons in a number of years,” Robison said.

With nearly a week remaining – late goose season closes on Valentine’s Day – it could wind up being one of his best.