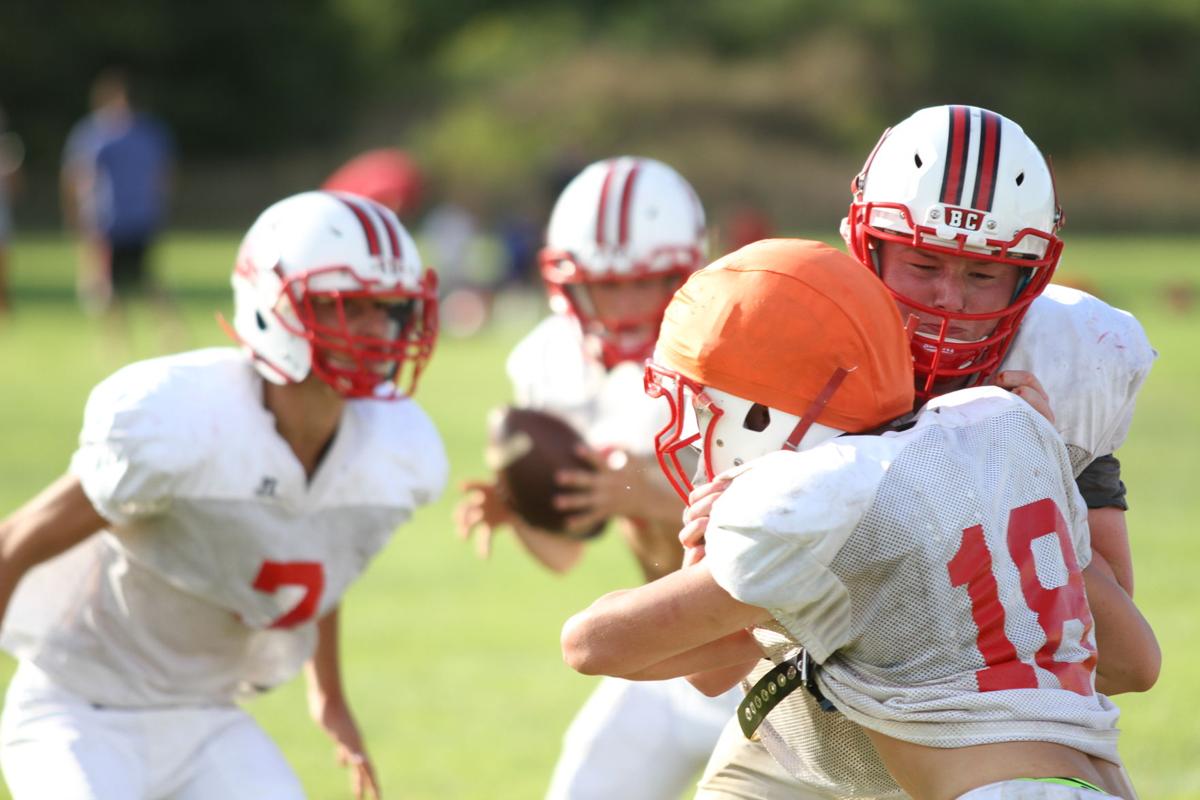 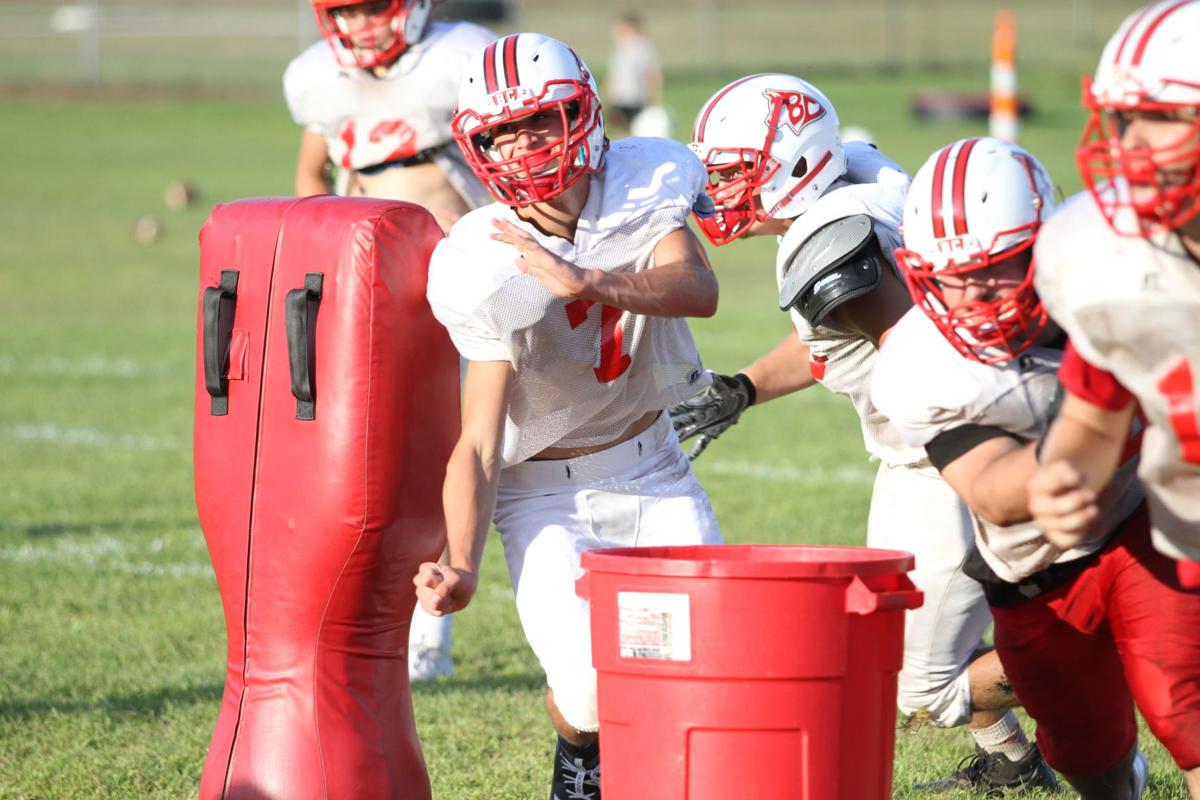 Benzie Central junior Mike Coyne (7) rips past a dummy during blitz drills at the Huskies practice at Benzie Central High School on Tuesday. 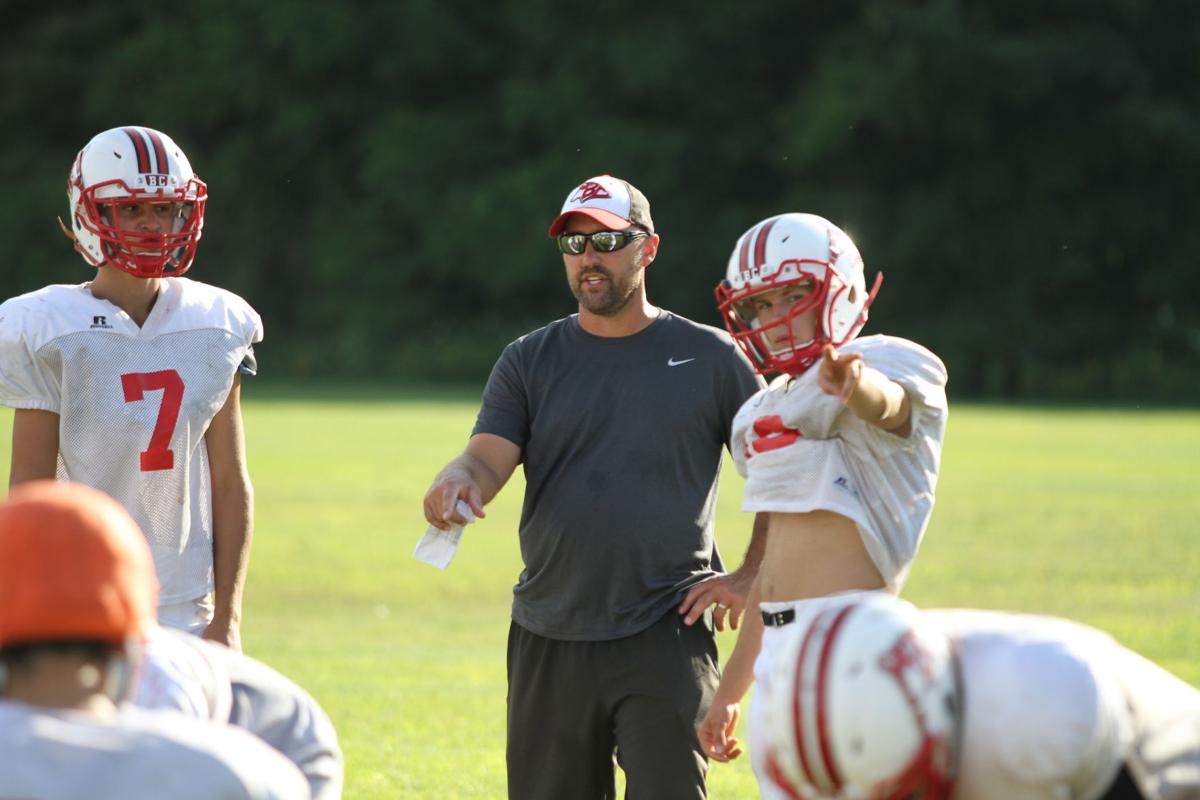 Benzie Central junior Mike Coyne (7) rips past a dummy during blitz drills at the Huskies practice at Benzie Central High School on Tuesday.

BENZONIA — It has been a long, hard road for the Benzie Central Huskies.

Just three years ago the Huskies football team was forced to cancel the season due to low numbers — now they are 24 boys strong and looking to build off the program's most successful season since 2011.

Numbers aren't the only thing that has changed the direction of the program. It has been years of work behind the scenes to bring football back to the forefront at Benzie

"It has started and it will end in the weight room," sixth-year head coach Jason Katt said. "It has taken a while to get that piece going. We have invested a lot of time and effort in that little nook and cranny of a room.

"As difficult as it is to walk up those steps to the weight room, to get under the squat bar or to deal with the heat and humidity up there — I firmly believe we are all reaping the benefits of that effort."

Katt started 'Technique Tuesdays' with the sixth grade class when he started with the Huskies in 2014, working on the proper way to lift weights and prepare your body for athletics. Now that class has made it to the varsity level and Katt has seen a culture change.

At the top of the weight room steps at Benzie is a mural that reads "Your senior year does not begin when you become a senior." Katt thinks that message really stuck with his players in their youth.

"We got a bunch of boys that have been just sacrificing and beating the weight room up," he said. "Does that equate into wins? I don't know, but it sure does equate into some confidence."

Confidence is riding high at the Huskies compound following a 6-4 season that landed them in the playoffs for the first time since 2011 and only the second time since 2004. Benzie's program has rebounded from the 2017 season when they were forced to forfeit seven games to boast 24 varsity and 27 junior varsity players. This year's senior class has been under Katt's influence since middle school and they have progressed as the years have gone on.

"We've just been working harder than we have ever before," senior captain Spencer Steeves said. "It started out four or five years ago, when I got here. Coach got us to work and that whole time we were building every year and getting better every year. This year, nothing's going to change. We will only get better."

The Huskies have only five seniors compared to 15 in 2018. However, Steeves feels that this year's team has more experience. More than half of the Huskies' roster has varsity playing experience and was a part of last year's success.

Benzie is returning multiple starters on both sides of the ball but will be handing the quarterbacking duties to junior Chris Dunlop. Dunlop started a defensive back in 2018, but is making the transition back to QB after playing it as an underclassman.

Steeves described Dunlop as "mature and smart" and as someone who knows how to read a defense. Steeves, along with juniors Sam Ross and Mike Coyne, will be part of a trio of running backs.

The Huskies are returning three of their five starting offensive lineman from last year. Grant Hackbarth's 6-foot-3, 270-pound frame will anchor the right side of the line with Chandler Yacks and Kyle Wilson returning as well.

Senior Cody Hanson will also see looks in the backfield and will be the leader of the defense at linebacker.

Benzie Central is loaded with 17 juniors and Katt hopes that they will learn from the likes of Hanson and the other seniors, keeping the Huskies' future bright.

"Cody Hanson has been a four year starter and has been the heart of this program," Katt said. "He was the heart as a freshman, sophomore, junior and senior. He's back and I hope someone can learn from him and be the heart next year."

The Huskies will be running offensive and defensive schemes that Katt describes as "Mutt schemes," tossing anything that works for them into the fold. Katt said his strategy is getting the ball into his playmakers' hands and letting them go to work.

Benzie's football team motto is to "prevail" and overcome any obstacles. They already got away from the same fate the 2017 team had and have no plans of regressing to their former selves.

"Football is OK here, it was on life support but it's OK right now," Katt said. "These boys lived that. They know what a lot of people don't know. They are committed to not letting that happen again."

Huskies at a glance