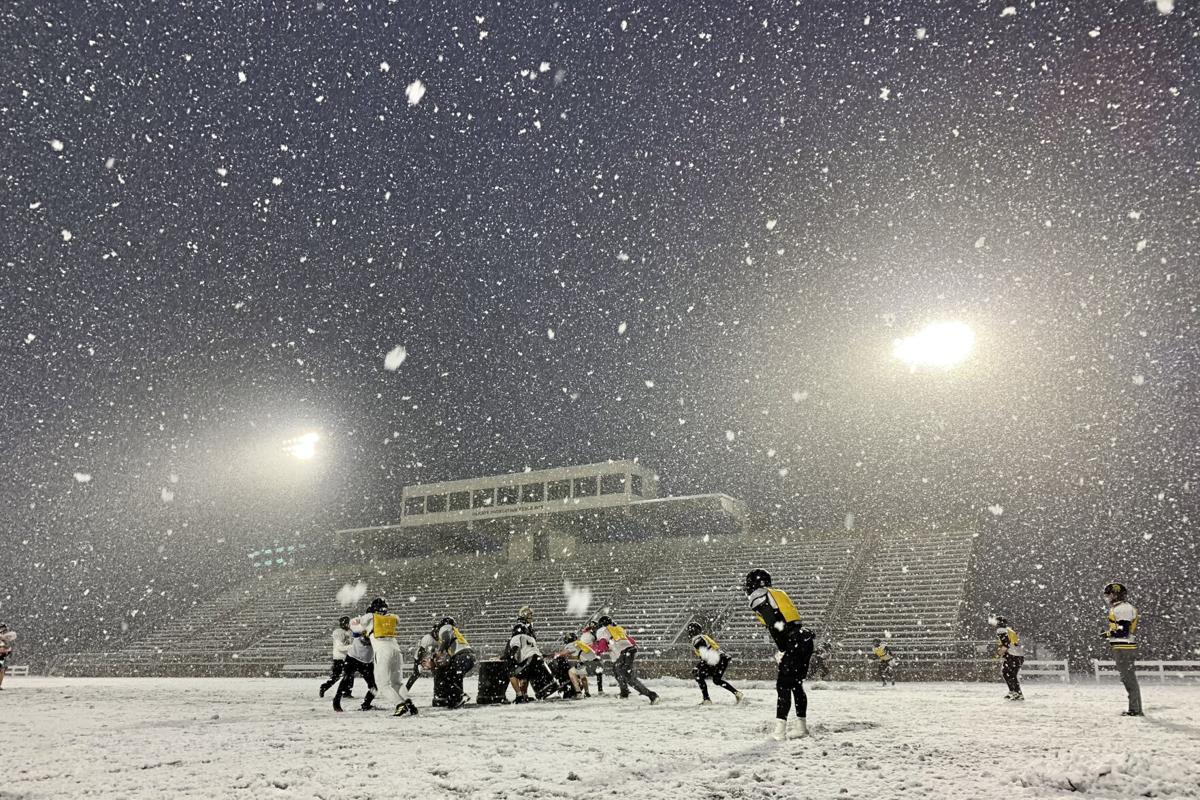 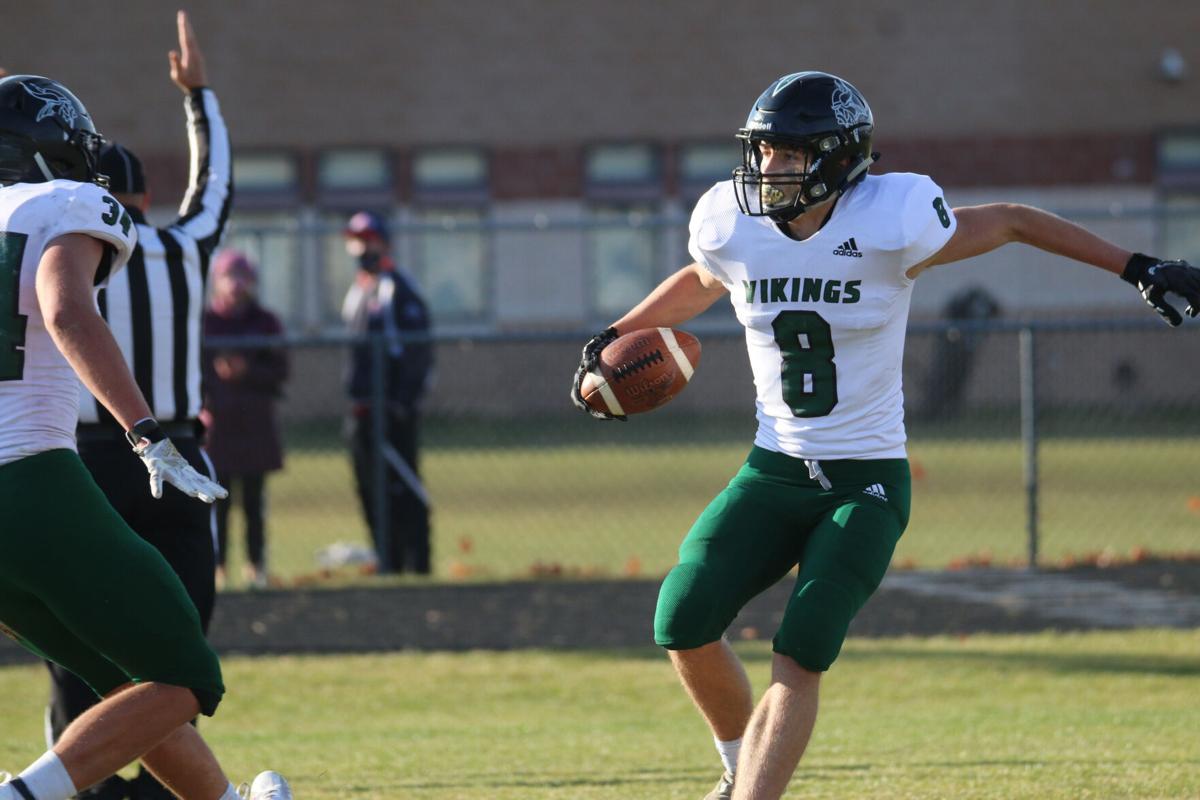 TRAVERSE CITY — Saturday marks 56 days since high school sports shut down because of a second wave of COVID-19 infections in Michigan.

It also marks the return to competition for five area football teams — TC St. Francis restarts next week after an opponent forfeit — still in the hunt for a 2020-21 state title.

Five games take place Saturday, headlined by the Division 2 matchup when Traverse City Central hosts North Farmington at Thirlby Field at 2 p.m. The Suttons Bay Norsemen host Inland Lakes for a shot at a second straight eight-player title game appearance; Grayling looks for its first regional title in school history against Negaunee; Cadillac has a shot for its first semifinal appearance while hosting Forest Hills Eastern; and Johannesburg-Lewiston takes a trip to the Superior Dome to play Iron Mountain.

The remaining teams, staff and cheerleaders are part of the Michigan Department of Health and Human Services COVID-19 antigen pilot testing program that allowed this weekend to happen after nearly two full months away.

“It‘s the only kind of negative I like to see,” Suttons Bay head coach Garrick Opie said of the antigen tests. “A negative test is definitely a positive right now.”

Area teams saw plenty of positives from their athletes as they “hit the ground running” after the layoff, according to Opie. Teams have yet to see a positive COVID-19 test and come prepared with two months of film and scouting knowledge on their opponents heading into the final stretch of the postseason.

Here’s a look at the five matchups slated for this weekend.

The Trojans search for the school’s first regional title in 32 years behind top recruit Joshua Burnham, running back Austin Bills and an offensive line that has led the offense to 48.8 points per game.

A home game in Traverse City in January seems like a far cry, but the weather cooperated so far. TCC head coach Eric Schugars said his team is happy no matter what mother nature throws their way, as long as they get to play again. Kickoff is set for 2 p.m. Saturday.

The No. 10 Trojans take on the Raiders of North Farmington (7-2), whose only non-forfeit loss came to a 7-1 Rochester Stoney Creek team in Week 2. Schugars said scouting the Raiders for two months has given then coaching staff a good look at how to stop their big playmakers — quarterback Jacob Bousamara (1,354 pass yards, 15 pass TD) and wide receiver Justin Whitehorn (860 receiving yards, 11 receiving TD).

“They’re pretty dynamic and have big play capability and that’s what we got to do is try to eliminate their big plays,” Schugars said. “We want to get the ball back to our offense because we feel like the strength of ours is the offensive line but we’re pretty dynamic too. We’ve got a lot of weapons ourselves so we’re going to utilize those in this process.”

The Raiders average just over 30 points per game, nearly 20 less than the Trojans. Burnham has a total of 30 touchdowns so far this season, followed by Bills, who ran for 887 yards and 12 scores. Schugars said his team talked about a regional title and beyond since the summer time and think this is a golden opportunity.

“Not every program can talk about that, but it’s pretty realistic for our guys and we have a talent,” Schugars said of making a deeper run. “I think our guys believe and that’s important part, especially this late in the year. Everything we’ve gone through if you put all that together ... our guys are ready, they’re poised to take that next step up.”

The Norsemen made a name for themselves in the eight-player football realm with two straight semifinal appearances. After falling to Pickford in 2018 in the regional final, 48-42, the Norse made a run to the state title against Colon last season.

Tearing through the regular season undefeated, Suttons Bay posted four shutouts and held six teams under eight points or less while outscoring them 384-68. Opie said his team was excellent at keeping on top of workouts and game planning while isolated from one another and they haven’t missed a beat.

“I think we picked up where we left off and we really hit the ground running,” Opie said. “They are truly excited to play football, and I can feel that energy this week as well and in the previous week, they have been excited to be here and excited to play in it together.”

Suttons Bay began the pilot testing program as soon as allowed and got back on the field to make sure they “had a sense of direction.” The direction leads them to a matchup with Inland Lakes (8-1), which have had an incredible bounce-back season following back-to-back 0-9 campaigns in 11-player football.

“I feel that Whittemore Prescott was really good for us and I think St. Mary’s was good for us as far as the experience needed to beat this type of team,” Opie said. “They are going to be a physical team with a lot of size on the line. They’ve got speed in the backfield and an accurate quarterback. We have scouted them heavily.”

The Norse have been led by Michael Wittman on defense with 88 tackles and 5.5 sacks and Hugh Periard on offense with 13 scores on the ground on 799 yards. The game is at 1 p.m. at Suttons Bay.

Cadillac spent more time off over the last three months than any other team remaining, earning a first-round bye in the playoffs before a forfeit gave them a second-round win. The Vikings have only played one game since Oct. 24, taking out Sault Ste. Marie 34-14 on Nov. 13.

The Vikings host their first regional playoff game and look to make it to the first semifinal in school history with a win over visiting Forest Hills Eastern (6-3). Kickoff is 1 p.m. at Cadillac.

Led by Collin Johnston and Dan Gray on defense, the Vikings’ only two losses this season have come to TC Central and TC West in Big North Conference play.

Vikings head coach Cody Mallory said the time off was much needed and a couple weeks at practice before Saturday’s game were needed to work out the kinks after time off.

“Bright side is that we got everybody healthy,” Mallory said Dec. 3. “But you could see in the first half in our game against the Soo that it took us a minute to get up to speed and to get back to the level of violence you need to play with.”

The Hawks are led by Caden VanderBerge (TE/DE), Jacob Armbrester (WR) and Grant Lancaster (WR/S). Forest Hills Eastern was held to 12 points or less in all three of their losses so the Vikings defense will need to step up to earn the schools first-ever regional title.

Grayling started the season 1-3 before rolling off five straight wins to earn a spot in the school’s first regional title game since 2005. The Vikings took down area foes Manistee, Boyne City and Benzie Central on their way to a showdown with the Upper Peninsula’s Negaunee (6-3).

The Vikings are in the midst of a special run led by quarterback Hunter Ventline, who passed for 1,206 yards and 14 touchdowns this season and added three on the ground, and running back David Millikin.

Millikin had a huge season with 1,257 rushing yards and 24 scores on the ground, earning NMFC-Legends Offensive MVP honors this season. The Vikings host the Miners at 2 p.m., Saturday, the first the school has hosted this deep into the playoffs.

The Miners make their the trip back to a regional title game for the first time since 2013. Negaunee’s offense has been led by Nash Hillier with 976 yards and 12 scores, good enough for conference co-offensive player of the year awards. The Miners defense has been solid all season, allowing only 100 points in eight games played.

The Johannesburg-Lewiston Cardinals are the only area team that have to hit the road this weekend and it takes them to the Superior Dome in Marquette at Northern Michigan University to take on Iron Mountain.

While the Cardinals rung up a 9-0 record and dominated opponents, outscoring them 391-98, they were not afforded home-field advantage. The Mountaineers only played one regular season game before winning two in the playoffs to get to this spot.

Unlike the rest of the state’s playoff games, the matchup slated for Saturday at 5 p.m. in the dome will not allow spectators because of NMU rules. However, the Cardinals don’t mind as it shortened the trip considerably.

Joburg has been led by the stellar offensive work from senior Sheldon Huff (1,212 yards and 15 TDs), who earned first-team all state, and all-state center Tommy Runyan. The Cardinals averaged 48.6 points per game and ran for 3,189 yards as a team. Huff also added 115 tackles and two interceptions on defense to help hold opponents under 100 total points so far this season.

The Cardinals are looking for their first trip to the state semifinals since 1998.

SUTTONS BAY — Suttons Bay wanted badly to get back to the state championship game.

HARBOR SPRINGS — Winter sports are back.