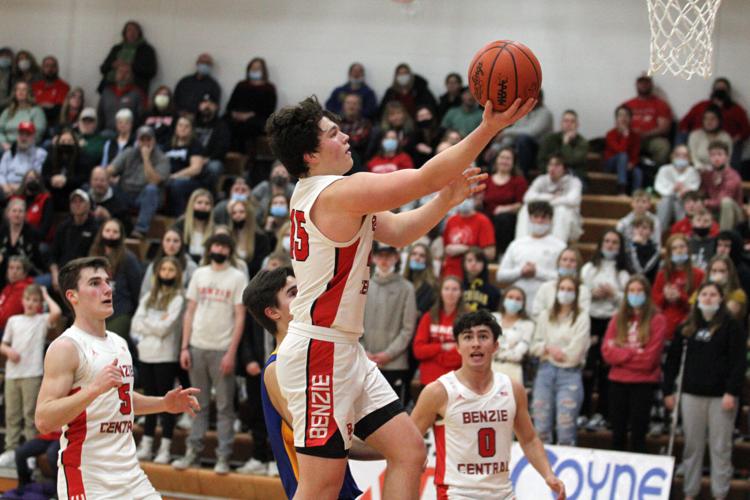 Benzie Central’s Quinn Zickert goes in for two of his game-high and career-high 35 points Monday against Buckley. 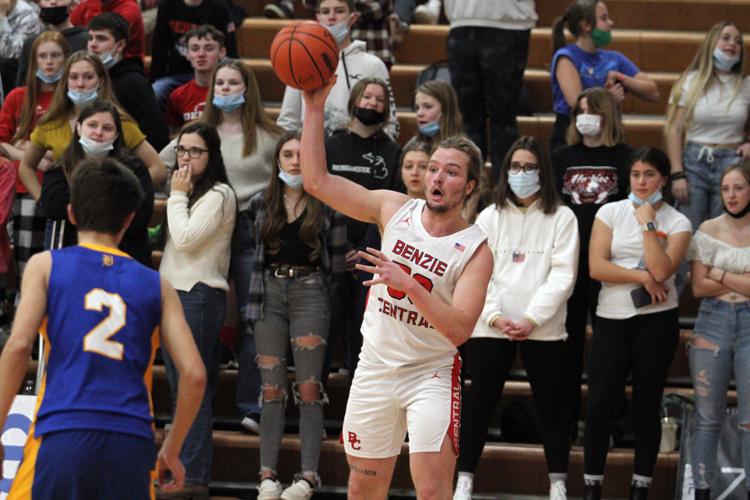 Benzie’s Michael Wooten passes the ball in front of the Huskies student section Monday against Buckley. 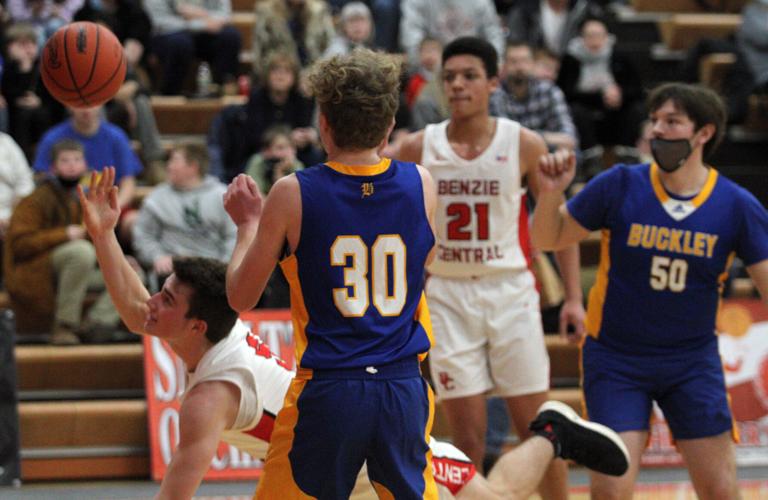 Benzie’s Nate Childers tries to get off a shot as he’s fouled in the first half Monday against Buckley. 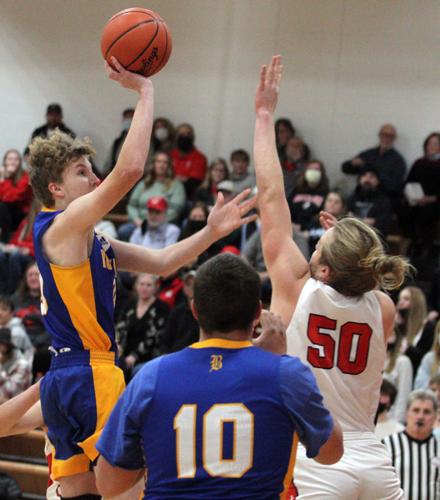 Benzie Central’s Quinn Zickert goes in for two of his game-high and career-high 35 points Monday against Buckley.

Benzie’s Michael Wooten passes the ball in front of the Huskies student section Monday against Buckley.

Benzie’s Nate Childers tries to get off a shot as he’s fouled in the first half Monday against Buckley.

BENZONIA — Benzie Central developed a reputation as a second-half team.

So the Huskies went a little outside the game plan and started kicking things into gear in the second quarter.

Buckley, ranked 10th in Division 4, jumped out to a 27-17 lead on a Jackson Kulawiak free throw with three minutes left before halftime. That lead shrunk to three by intermission and eventually caved into on itself and blew up into a 22-point Benzie advantage as Quinn Zickert came alive.

The Huskies won 72-55 in the battle top-10 and undefeated teams, leaving Benzie, ranked third in Division 3, all alone atop the Northwest Conference standings.

After not scoring a single point in the first quarter, Zickert put up at least 10 in each frame thereafter, including 25 in the second half to ring up a career-high 35.

“I didn’t like the score, and then I just kind of took over from there,” Zickert said. “Start to be a leader of the team. It’s my senior year, so I was trying to get everyone involved.”

“I was really worried about that,” Benzie head coach Josh Crocker said. “He’s not a big scorer for us. He’s not a big rebounder for us, but he’s huge with tempo. He leads us in assists.”

Benzie also had a quick turnaround from their Friday game, the program’s first victory over Frankfort since 2013.

Buckley (5-1, 4-1 Northwest) had won the program’s most games to start the season since the 2017-18 team that made it to the state finals with a 26-1 mark. The Bears led 12-6 after one quarter, forcing turnovers on defense and ending the period on a 7-0 run punctuated by Tyler Milarch’s baseline 3-pointer.

“I just told them I’m not worried,” Crocker said. “That’s no insult to Buckley at all. We knew they had shooters. They came out hot and they did some things that obviously made us less effective in a number of ways. But I just told them, they can’t panic.

“We did a good job executing our game plan the first half,” said Buckley head coach Jared Milarch, a Benzie Central grad. “Just statistically, if you look at Benzie, they come out hard in the third quarter all the time. We knew they were going to make a push at us and unfortunately got a little foul trouble and then and let it slip.

“Credit to Benzie, they did what they’re supposed to do and took care of the ball and got us pretty good the second half.”

Zickert scored 10 points in the second quarter, 13 in the third and another dozen in the fourth.

“We just got a spark,” Zickert said. “Buckley, they played great. We know the guys and we’re pretty good friends with them. It’s a good rivalry and a really good game each year. We just couldn’t let them get the best of us.”

Benzie’s answer to Breithaupt’s 10-point first half was to double team him with Michael Wooten and Miles Pritchett to start the second half. That held the Buckley 6-foot-6 big man to two points the rest of the way.

“Ty Breithaupt, the big kid in the middle, is getting better every game,” Milarch said. “That’s going to be key for us to keep things moving here.”

A 15-0 third-quarter run took the game from a 31-31 tie to Benzie being in complete control.

Zickert scored a dozen in the first 4:42 of the fourth quarter.

“It was a pretty rough first half,” Zickert said. “We weren’t playing to our potential and then kind of just kicked it in gear.”

Zickert hit 12-of-22 shots, including 4-of-7 from downtown. He also had four assists and only one turnover.

Miles Pritchett was the only other player in double figures for the Huskies, pitching in 11. Brothers Nate and Jaxon Childers each scored seven, Wooten six, and Kevin Hubbell four.

“I hope this sends a message to the conference that we’re a pretty good team,” Zickert said. “We’re undefeated in the conference. That’s one of our goals, so we’re working hard for that.”

The schools play again in 12 days at Davenport University. Buckley travels Tuesday to Bear Lake, while the Huskies host Suttons Bay on Friday.

BOYNE CITY — Sixty-seven wrestlers made a bit of history Sunday.

BRETHREN — Mesick kept up its winning ways, coming up victorious for the third time in five …

KINGSLEY — Glen Lake hit the halfway point of the season without experiencing a loss.

Last Sunday’s tournament wrestling tournament in Boyne City stood out for a myriad of reasons.