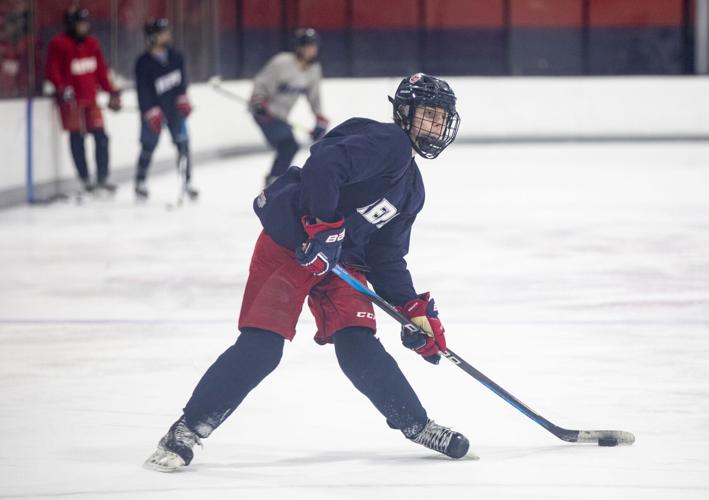 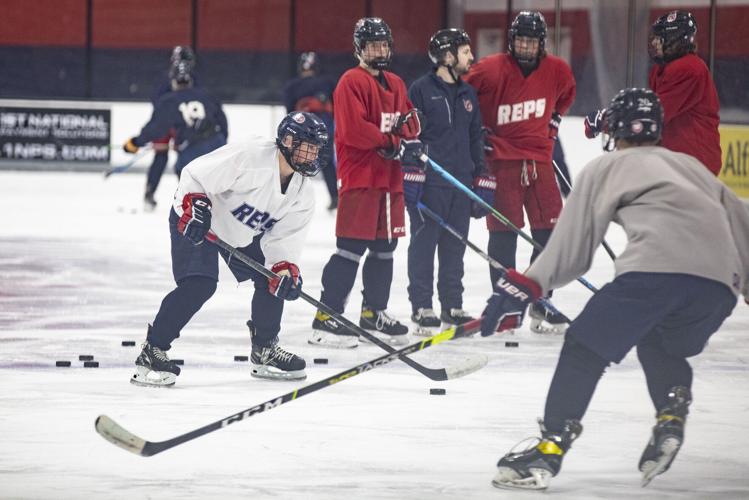 TRAVERSE CITY — Winter has arrived in northern Michigan, which only means one thing — hockey season is here.

Teams throughout the area have already gotten ready for their upcoming seasons. Some teams have switched divisions or coaches, while others are in the early stages of developing players. Others have already started their season.

Not much has changed for the Bay Reps — aside from switching from Division 1 to Division 3 this season and losing some key players. Bay Reps head coach Mike Matteucci is excited to get things going.

“Last year, we had a lot of new players, but this year not as many. We lost in the (Division 1) state quarterfinals last year, and it was a game I think we did let slip away,” Matteucci said. “I think the kids all learned from that, and we’ve talked about it.”

The Reps now play in Division 3 for the first time this season, but Matteucci doesn’t see any differences — except when playoffs roll around.

For the early part of the season, the Reps have been without Hathaway and Hardy because they’ve been playing football and are attempting to bring home a state title to St. Francis on Saturday.

“I’m so happy for those two kids,” he said “They got a great opportunity to play in the state final game. From day one, they’re all in football and that’s where I want their minds to be. We’ll hold down the fort until they get here, but we’re watching them closely.”

“I learned that good work ethic could change around the season and doing the little things right and becoming more of a team takes you places that you wouldn’t have if you didn’t have that same team atmosphere,” Pierce said.

“It’s the little things, talking when working in the corners, not wanting to lose,” Kihn said. “It’s all about team effort.”

Pierce finished last season with six goals and 12 assists. Kihn finished with one goal and 11 assists, but their ability to get the team’s attention is what has helped the Reps, especially after losing some key players.

“I look at Jason Kihn and his confidence that he has now on the ice,” Matteucci said. “Riley Pierce, too. He’s developed as an amazing leader, really vocal with the kids in the locker room.”

Matteucci is excited to see the development of his players over the next few months.

“The young guys last year were good skilled players,” he said. “And they came on toward the end of the year. I expect them to be leaders on our team and some of them are 10th graders and 11th graders, guys that are first-year players. They are going to lead our team this year.”

Changes at the top

Traverse City West will have Zach Bargy leading the charge as head coach after longtime Titans’ HC Jeremy Rintala stepped down. Bargy has been a part of the Titans’ staff for four years as an assistant. Before that, he played four years for the Bay Reps.

“I’m pumped. We have an inexperienced group, but we’ve been at it for three weeks at practice,” Bargy said. “They show up to work and want to learn. As a coach, that’s all you can ask for.”

The Big North Conference has gotten stronger and tougher over the past few seasons, according to Bargy and Traverse City Central head coach Chris Givens.

“You can’t take nights off. You only get so many Big North games, and everybody in the conference is good enough to beat anyone else,” Bargy said. “You got to win every game you can.”

The Titans lost five seniors from last year’s squad but will have eight this season. West will be without one of their top scorers and Division 2 Second-Team forward Michael Schermerhorn, but the Titans have players willing to step up.

Bargy said senior goalkeeper Mason West and junior forward Brandon Meyers are two guys that will be asked to lead the team. Both have been nothing but wonderful to coach, Bargy said.

“First guys in and last guys out, that is what both of them are,” Bargy said. “I swear, they beat me to the rink every day, and I got to push them out the door to leave.”

West earned Division 3 Second Team last season for goaltender while finishing the season with 432 saves. Meyers had 10 goals and 16 assists.

The Titans kick off their first game Friday at Center Ice Arena against Northville.

Traverse City Central won’t have much of a change, besides losing some quality players who helped them have a 17-7-1 overall record and a 7-2-1 conference record. The Trojans finished second in the BNC behind Petoskey.

The Trojans made it to the Division 2 state quarterfinals but lost to Marquette 7-1.

The Trojans had a big group of first-year players — most of them freshmen. They will have 15 players back who were on the team last season and will have four senior captains this season — defender Owen Dawson, forward Cam Peters, defender Tyler Cooper and forward Hunter Folgmann.

The Trojans kick off their season Wednesday at Howe Ice Arena against Gaylord. The Trojans won’t get their first BNC opponent until Nov. 30 against Petoskey.

The Northmen took the BNC title last season with a 9-1 record, finishing 21-3 overall. Despite Petoskey finishing first, TC Central got the better end of the stick by beating the Northmen 2-1 in Division 2 regional semifinals.

Petoskey will be losing seven seniors but will have a team that has playoff experience after getting a crack at regionals. The Northmen’s first game is against the Trojans.

Like TC West, the Lakeshore Badgers have a new coach at the helm. Parker Rey spent last season as an assistant under Bill Shriver — who retired after his son, goalkeeper Alex Shriver, graduated.

“The parents have been fantastic this summer in terms of welcoming me into the community and the program as well,” Rey said.

The Badgers have a lot of underclassmen this season, along with a few seniors and juniors. Goalkeeper Ansel Carroll will be asked to fill in the role of Alex this upcoming season. Carroll already has experience because he had to take over for a few games last season.

The Badgers will start their season on the road against Cadillac.

The Vikings have started their season already with two wins under their belts. Cadillac beat Tawas 4-0 and Southgate Anderson 7-2.

Over the past few seasons, the Vikings have been developing their young talent to where they are now. Coach Scott Graham noted that with that development, it’ll take the juniors and seniors to provide that leadership for the young guys.

Forward Henry Schmittdiel has already got his senior season started with a team-high three goals and two assists.

The Vikings travel to Big Rapids (1-1) on Wednesday to take on the Cardinals.

Gaylord (0-1) already started the season with a loss to St. Clair Shores Unified, 1-0. Last season the Blue Devils went 8-15 and 2-8 in the Big North, losing in the Division 3 regional finals 9-6 against Alpena.

The Blue Devils lost seven seniors last year who helped make their playoff run happen. This season they’ll have a fairly young team, but four seniors will be looked at to help lead the team.

Senior Issac Hopp finished his junior year campaign with a team-high 14 goals while collecting 18 assists. The Blue Devils look to get back on track on the road against TC Central on Wednesday.