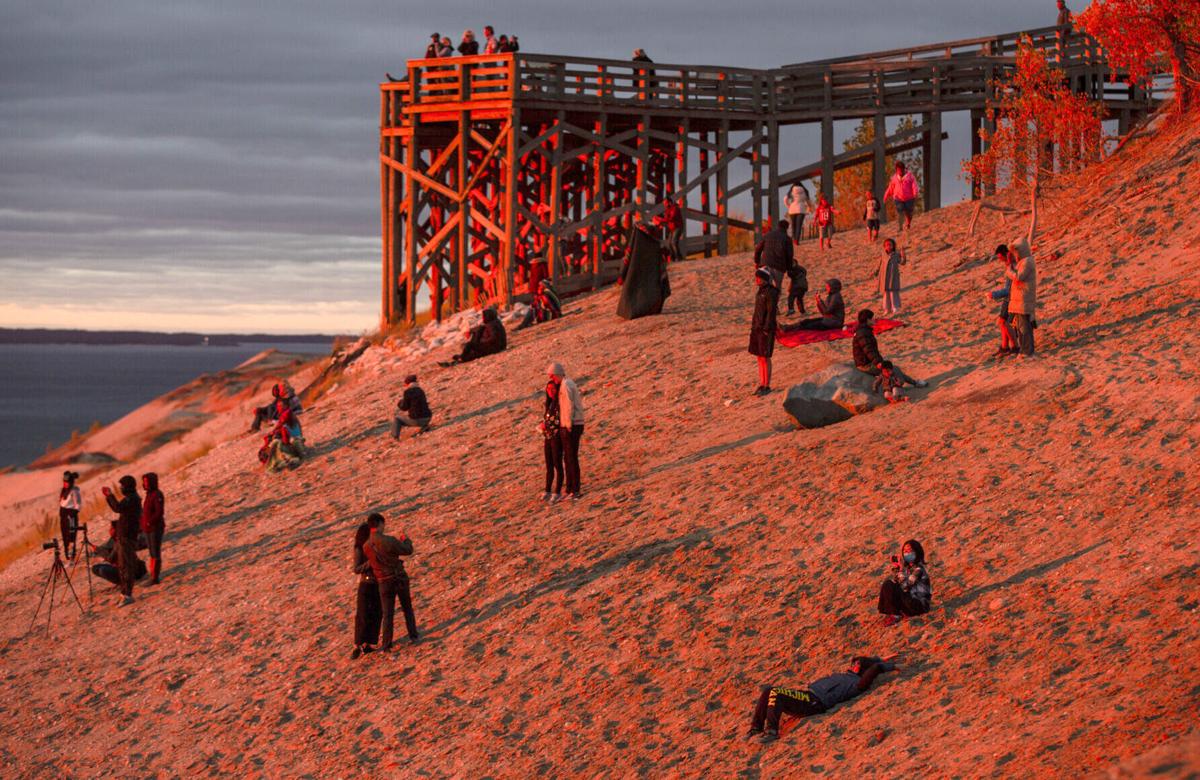 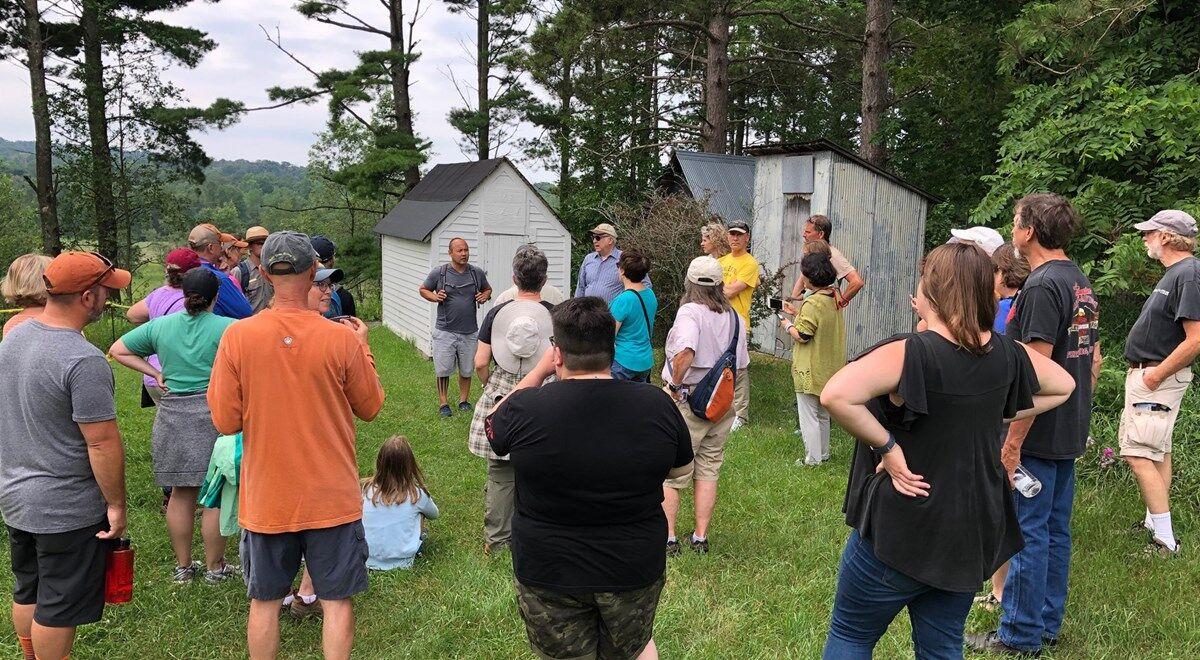 Eric Hemenway giving a talk while on a guided hike with visitors at Treat Farm. 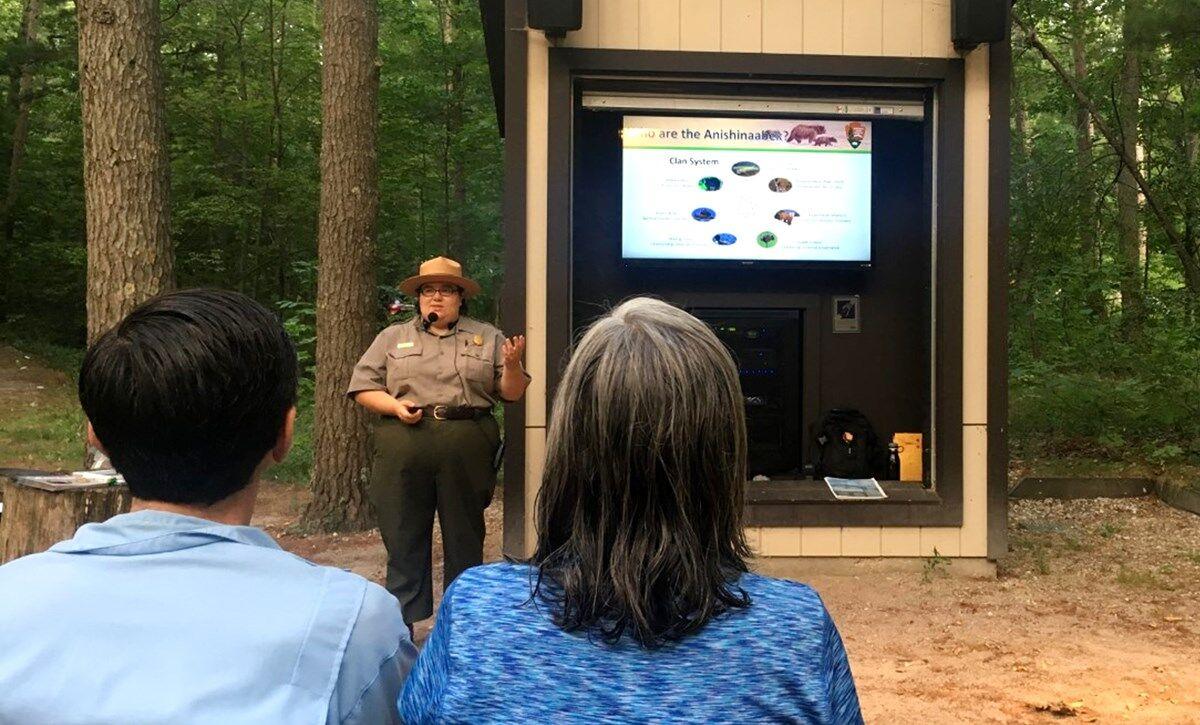 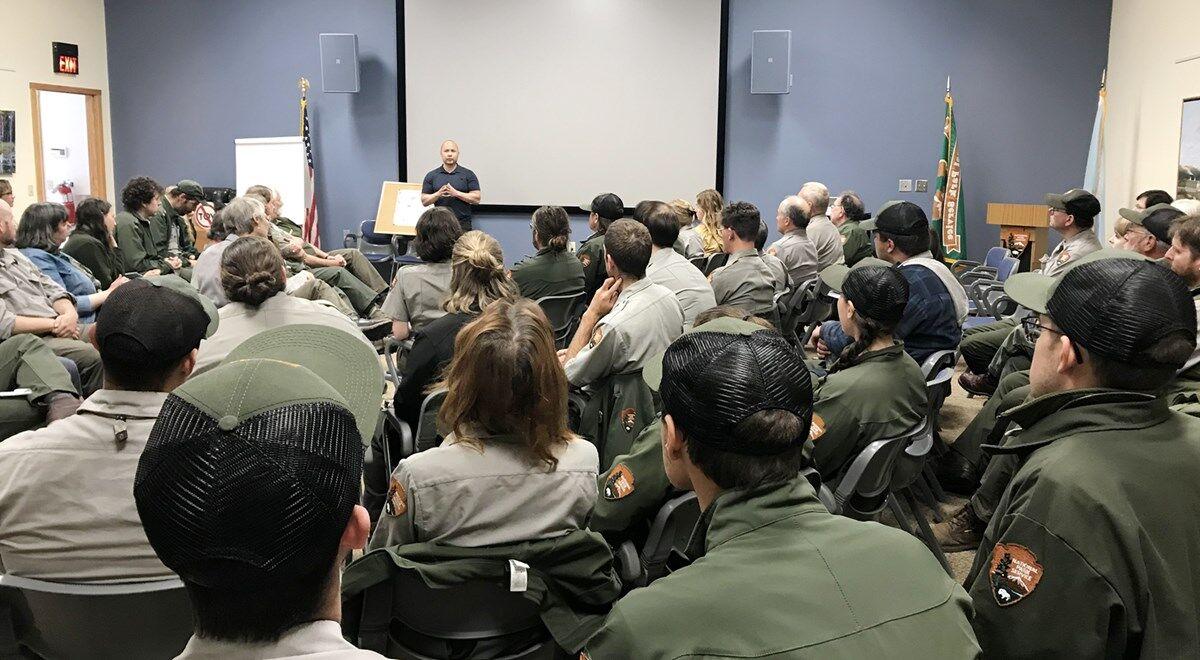 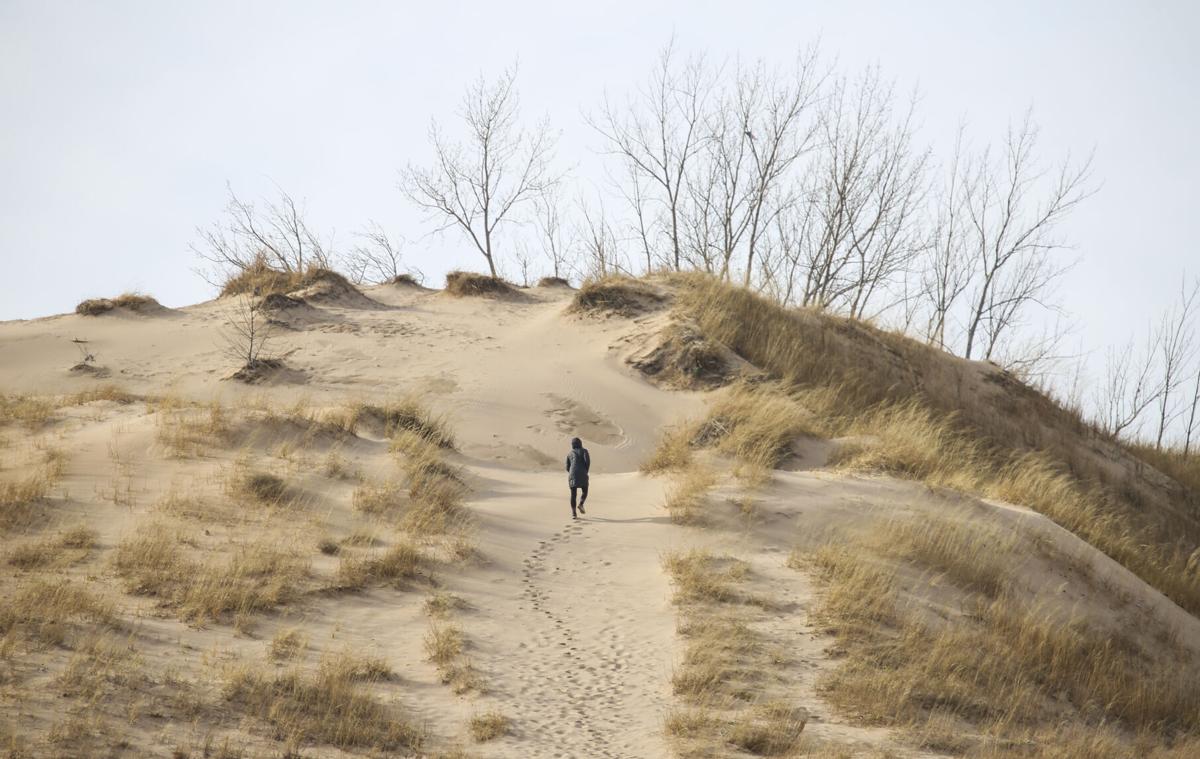 Eric Hemenway giving a talk while on a guided hike with visitors at Treat Farm.

Sleeping Bear and the oral tradition

— from the National Park Service "Story of Sleeping Bear"

Two different versions of the story are commonly told. These stories are an Anishinaabe (Odawa/Ottawa, Ojibway/Chippewa and Potawatomi) oral tradition of a sacred place within their homelands in the Great Lakes.

Once, long ago, in the land called Wisconsin across the great lake, there was terrible hunger and many people died. A bear and two little cubs were trying to leave that place and come around the lake where there would be more food.

They walked for many days on the beach together, but after a while the two little cubs began to whimper with hunger, and so the bear decided to swim across the rest of the lake.

They waded into the water, one cub on each side of the bear, and they swam off into the lake a long way. After a while the cubs began to get very tired, and so the bear said, “Try hard, the land is not very far.” And very soon they did come in sight of land.

But gradually the cubs got weaker, and only 10 miles away, one cub sand into the water. Soon after, the other also drowned.

The bear’s heart was broken, but she could do nothing. She waded ashore and lay down, looking out on the water where her cubs had died. Eventually, both of them came to the surface as two little islands, and so the bear still lies there atop the dunes, looking after here children.

Long ago, along the Wisconsin shoreline, a mother bear and her two cubs were driven into Lake Michigan by a raging forest fire. The bears swam for many hours, but soon the cubs tired. Mother bear reached the shore first and climbed to the top of a high bluff to watch and wait for her cubs. The cubs drowned within sight of the shore. The Great Spirit created two islands to mark the spot where the cubs disappeared and then created a solitary dune to represent the eternal vigil of mother bear.

The name of the Sleeping Bear Dunes National Lakeshore embodies the culture of Michigan’s first land and water stewards, and thousands of years of geological evolution.

Sleeping Bear’s massive coastal dunes are part of a 2 million-year earth story, according to geologists, while Native Americans as early as 11,000-8,000 B.C.E. fished, hunted, foraged and developed a rich culture alongside its Lake Michigan shores.

Sleeping Bear’s dunes, its forests, and lakes speak volumes to those who pay attention.

“The spirit is in the sands and water. But you have to take the time to listen,” said Julie Den Uyl, Sleeping Bear Tour Co. founder and former Sleeping Bear park interpretive ranger.

The Anishinabek listened for centuries. This ancestral land remains a sacred part of the identity of the Ottawa (Odawa), Chippewa (Ojibwe) and Potawatomi (Bodawotomi), collectively known as the Anishinabek people.

Some say the Sleeping Bear narrative, for which the park is named, represents stolen identity.

Henry Rowe Schoolcraft, a federal Indian agent in Michigan, in 1856 was the first to publish the popularized Sleeping Bear narrative. Although Schoolcraft’s wife was part-Ojibwe, a school of scholars claim the narrative he commercialized could only have been a loose translation, likely lacking accuracy and cultural context of the Anishinabek.

The American Indians in Children’s Literature, an organization dedicated to providing critical analysis of books for youth, suggests Schoolcraft’s story, and later published versions of the Sleeping Bear narrative, are nothing short of exploitative.

The narrative Schoolcraft promoted tells the story of a mother bear and her two cubs who swam Lake Michigan to flee famine occurring in Wisconsin. The cubs tire and drown. The mother bear, after reaching Michigan’s coast, perches herself along the shore in eternal watch for her young. Her figure is silhouetted in the outline of a massive dune.

In 2020, when Den Uyl served as park ranger, she learned the narrative, which even the National Park Service forwarded, was not altogether true to the Anishinabek oral tradition.

“In the oral tradition, the bear family escapes fire, not famine, and an important element is missing — that of the Great Spirit Manitou who raises the islands in honor of the two cubs,” she said. “Small details, but pertinent.”

Den Uyl continued, “As this is a very old oral tradition, we may never know the original sharing, but I believe oral traditions were shared for a greater purpose than storytelling.They provide all of us spiritual life guidance.”

Sleeping Bear Dunes National Lakeshore for the past several years has prioritized educating visitors of the park’s Anishinabek connection as an integrated part of its mission.

Collaborations with the federally recognized Little Traverse Bay Bands of Odawa Indians and other tribes, informs the effort.

“We know in looking back at history, there have been wrongs done to our native people,” said Emily Sunblade, Sleeping Bear education technician. “We can’t fix what happened in the past, but we can acknowledge what happened.”

Classroom courses developed for middle and high school students are focusing on broadening historical perspectives. Sunblade said Sleeping Bear school programs communicate the idea that “the dominant narrative and version of history and culture may not be the only version.”

Opportunities for park visitors to learn of Anishinabek history and culture include artifact displays at the Empire Visitor Center and Glen Haven Cannery Boathouse museum. Both offer a look into tribal craftsmanship and customs. A film for visitor viewing now in production incorporates the legacies of Sleeping Bear’s earliest inhabitants. Also, every ranger-led interpretive talk includes information gleaned through tribal collaborations.

Park employee training supports bringing an accurate picture of the Anishinabek to visitors.

“The goal in partnering with the tribe is so that it’s not rangers in uniform telling someone else’s’ story,” Sunblade said. “There is power in having somebody who has true connection to the tribe.”

Session leader Eric Hemenway, an Anishinaabe/Odawa from Cross Village, director of Repatriation, Archives and Records for the Little Traverse Bay Bands of Odawa Indian serves as tribal liaison to the national lakeshore. Also a member of the Michigan Historical Commission, Hemenway has guided park visitors on history hikes, sharing his intimate knowledge of the area’s Native American chronicle.

In the Michigan State University Extension podcast, Partnerships and Peninsulas, Hemenway told host Jeff Dwyer that he believes it’s important for historians to relate the entire story — the good and the tragic.

“We have all this information. We have all these resources, but if you’re not partnering with other entities and organizations and groups to help tell the story, it becomes very limited on how the story gets out,” Hemenway said.

“The lakeshore is a sacred space for Anishinaabe and many people who visit can feel the power,” said Den Uyl. “It only makes sense to learn about the first stewards of the lakeshore — who are the Anishinabek.”