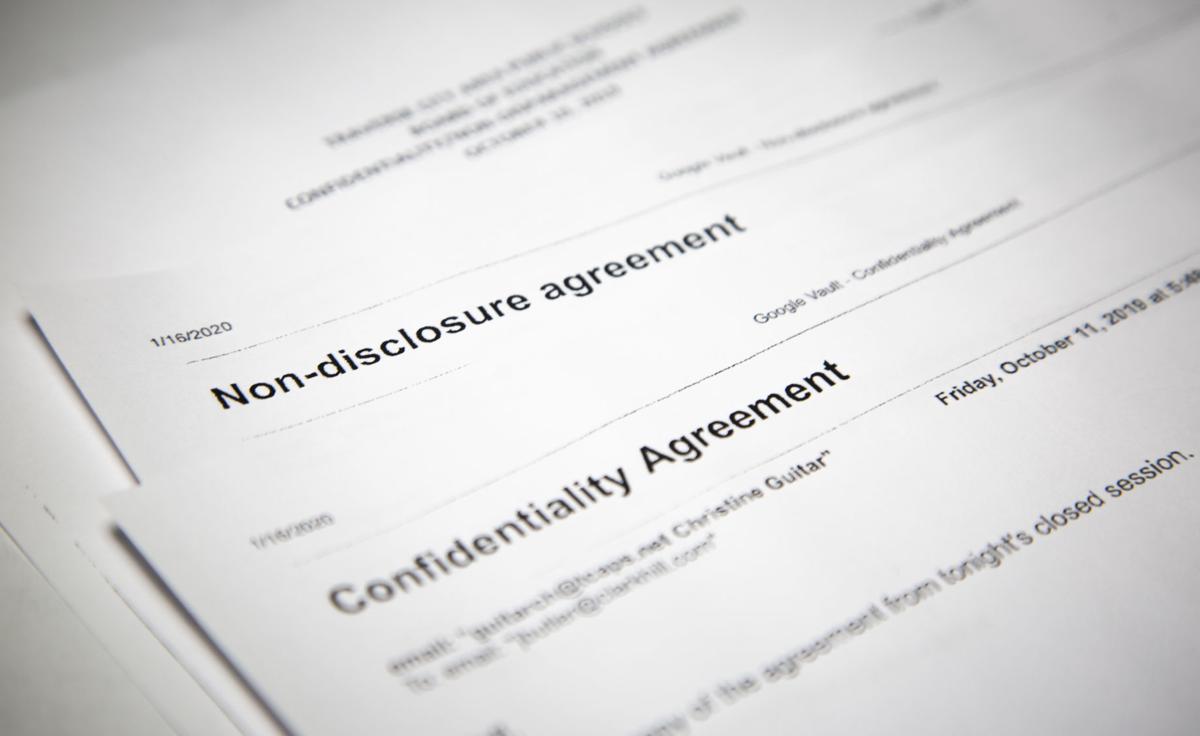 Printed copies of emails sent by TCAPS Executive Director of Communications Christine Guitar and a copy of a non-disclosure agreement in Traverse City. 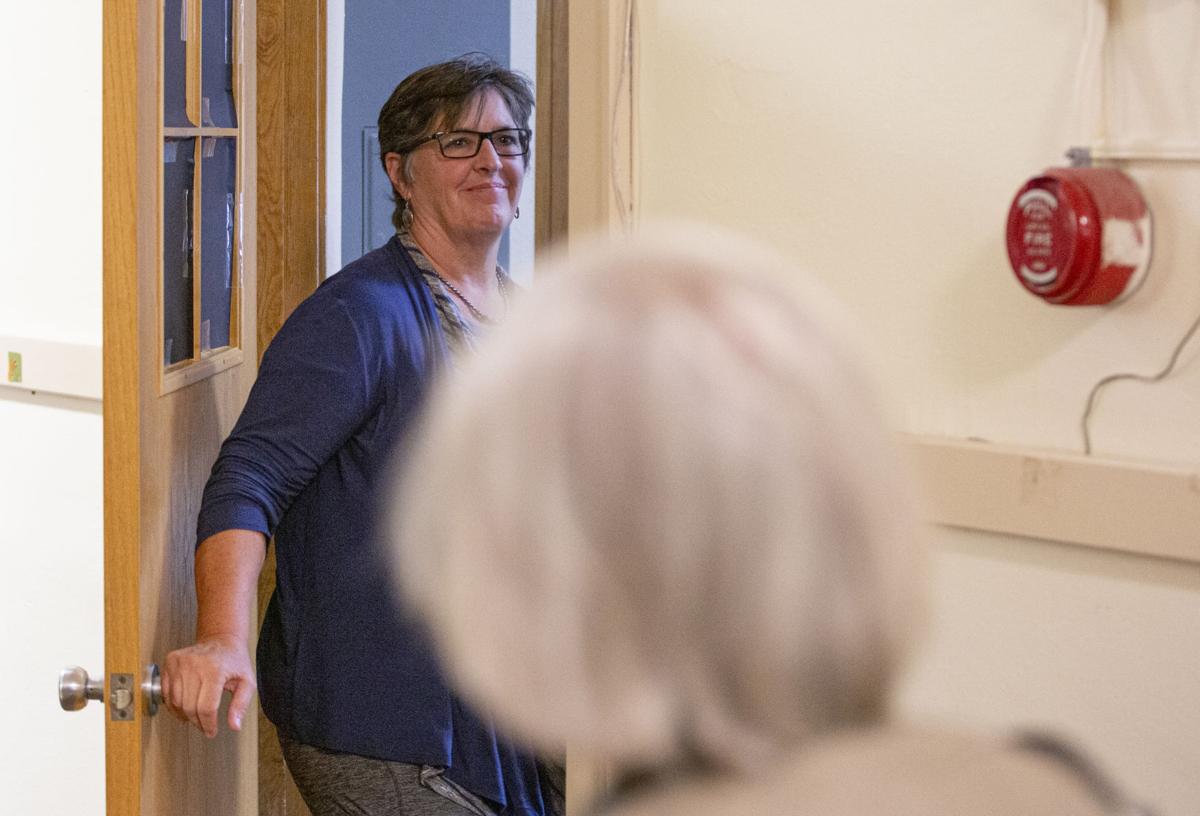 Traverse City Area Public Schools Board of Education President Sue Kelly closes the door to a closed session of a special meeting at the TCAPS Administration Building on Oct. 11 in Traverse City. Board members signed a confidentiality agreement in that meeting.

Printed copies of emails sent by TCAPS Executive Director of Communications Christine Guitar and a copy of a non-disclosure agreement in Traverse City.

Traverse City Area Public Schools Board of Education President Sue Kelly closes the door to a closed session of a special meeting at the TCAPS Administration Building on Oct. 11 in Traverse City. Board members signed a confidentiality agreement in that meeting.

TRAVERSE CITY — More than 100 people rose from their seats and either meandered about Conference Room C or spilled out into the second-floor hallway of the Traverse City Area Public Schools administration building on Oct. 11, 2019.

The six TCAPS Board of Education trustees present made their way to another room for a second closed session in five days after more than 90 minutes of blistering public comment deriding certain members for their actions in the coming departure of then-Superintendent Ann Cardon. Board President Sue Kelly glanced around before gently closing the door, keeping the board’s business from public ears and public eyes.

Yet board trustees did not get to that business for approximately a half hour, according to trustee Erica Moon Mohr.

Instead, Moon Mohr said, they waited around for a document to arrive — a confidentiality and non-disparagement agreement they were told they must sign before board business would continue.

The Record-Eagle obtained a non-signed copy of the agreement through a Freedom of Information Act records request along with email correspondence between TCAPS Executive Director of Communications Christine Guitar and TCAPS legal counsel Nancy Mullett and Jeffrey Butler regarding the agreement.

The agreement provided is dated Oct. 10, 2019, and has places for signatures from Kelly, Moon Mohr and fellow trustees Matt Anderson, Pam Forton, Jeff Leonhardt and Jane Klegman. Doris Ellery, who was the board vice president at the time, was absent from the Oct. 11 meeting, and the document does not include her name. Moon Mohr confirmed she signed the agreement and said the other trustees did as well.

Trustees Anderson, Forton, Leonhardt and Klegman did not return a call for comment nor did Mullet, Butler or Guitar.

Violation of the agreement states that a board member “may be subject to prosecution.”

Former TCAPS Treasurer Scott Hardy, who ended his tenure on the board Dec. 31, 2018, said such agreements were not common practice when he was a trustee, including during the monthslong investigation into former Superintendent Paul Soma on accusations of violations of state and federal civil rights laws, of which he was cleared.

Hardy said he would have spent a lot of time questioning the need to sign such a document and would have consulted an attorney on his own for advice.

“To the best of my recollection, I never was asked nor required to sign such a document,” Hardy said. “There were things we were told that because they were attorney-client privilege that we shouldn’t divulge, but we never signed anything.”

Michigan Department of Education spokesperson Bill DiSessa declined to comment specifically, but he pointed to the Michigan school code, which states that “the board or an official of a school district ... shall not enter into ... any other contract or agreement that has the effect of suppressing information about unprofessional conduct of an employee or former employee” — making the agreement void and not enforceable. Violations of the school code, DiSessa said, can result in deductions of state aid.

Attorney and former TCAPS trustee Jan Geht, who served on the board for a short time in 2017 and 2018, said he also never signed — nor ever would have signed — such an agreement in either his tenure with TCAPS or as a member of the Traverse City Light & Power board. Geht surmised the agreement itself and the threat of prosecution was targeted at just one person — Moon Mohr.

“I honestly think of it as a little comical,” Geht said. “Why would anyone ever sign such a thing?”

Geht said he understood and didn’t have a problem with getting something in writing from board members acknowledging they understand what the Open Meetings Act requires regarding confidentiality, but he felt the portions of the agreement that go beyond that are inappropriate.

Geht declined to comment on the legality of the document, but he said he believes it “violates the board trustee’s moral obligation to the voters, the students and the teachers” and places loyalty to the board above their required loyalty to the public.

Grant Parsons, a local attorney and vocal critic of the current TCAPS board, said his time as a clerk under late Federal Judge Richard Enslen taught him that confidentiality agreements entered into by public agencies are not honored and not allowed.

“It is absolutely anti-democratic. That’s the whole problem, and it goes to the core problem of this board,” Parsons said. “It provides a consistent theme of secrecy and silence. They promote bad conduct being withheld from the public. The public ought to know.”

Herschel Fink, legal counsel for the Detroit Free Press who has litigated high-profile First Amendment cases on behalf of Jay Leno, Dr. Dre, the Temptations and others, has been practicing FOIA and Open Meetings Act law since 1976. He said he has never seen nor heard of an agreement such as the one presented to TCAPS trustees.

Fink said the agreement is “against public policy” and violates the trustees’ oath of office as well as the OMA and the First Amendment.

“Gagging, that’s what it really is. It’s a gag order against public officials from speaking to the press or the public about public business,” Fink said. “This agreement, essentially, is saying you can’t exercise your judgment in being a trustee or a school board member. This agreement is threatening that you’re going to be prosecuted if you carry out your oath of office. It’s bizarre. It’s absolutely bizarre.”

Fink also argued the trustees act of signing the agreement in a closed session violates OMA and “constitutes an act taken in secret rather than in an open meeting.”

Kelly said she would consult with district legal counsel when asked if she felt it was appropriate to take action in closed session. Kelly later said she was “uncomfortable” talking about it, citing the pending litigation against her and the district from the Record-Eagle on accusations of OMA and FOIA violations.

TCAPS Interim Superintendent Jim Pavelka said he did not know if trustees did or did not sign the agreement in the Oct. 11 closed session, but he said “the law is pretty clear” on such an action.

“You don’t make decisions in closed session,” Pavelka said. “If you’re going to make decisions, those are going to be made in the open meeting. I’ve always been one who believes the Open Meetings Act is there for a reason.”

Both Pavelka and Kelly said, however, such agreements are standard operating procedure. Kelly said either Mullet or Butler drew up the agreements and that “everything we have done has been under the guidance and leadership of our lawyers.”

The Record-Eagle has requested a signed version of the agreement as well as all other similar agreements board trustees have signed or have been presented with in the last two years.

Fink argues the public has not been given essential information about how and why its tax dollars are being spent, especially if such discussions were had in that Oct. 11 closed session.

Such action would violate “every tenet of the law and the purpose of these laws — which is accountability,” Fink said.

“It’s so extraordinary to cloak this in a non-disclosure, non-disparagement agreement,” he said. “The public has been deprived of debate and discussion and is totally in the dark. It’s unseemly and illegal.”